Vomiting is a common non-specific condition that affects small animals, pot bellied pigs and some exotics. Vomiting is not routinely seen in horses, camelids or ruminants.

With vomiting, the stomach, abdominal muscles, and diaphragm contract. The lower esophageal sphincter opens. The palate and epiglottis move up to protect the airway.  (see link)

Vomiting comes with a very broad list of differential diagnoses, including both GI disorders (obstruction, ulcers, ileus; primary GI) and secondary disorders such as toxin/infection exposure, abdominal pain, endocrine or intracranial processes (secondary GI). They all work through the vomiting center in the brain.

Primary GI refers to cases in which the GI tract itself is involved.

Primary GI is more likely if the animal is not overly sick, has something abnormal on abdominal palpation (foreign body, intussusception) or has significant diarrhea. Generally a CBC, profile and UA are most helpful to rule out a secondary GI disorder.

Some of these animals will need surgery!

Secondary GI refers to causes of GI type clinical signs that are related to organ dysfunction that isn’t the GI tract.

With secondary GI issues, animals are often sick and  generally are normal on abdominal palpation.

Generally, surgery and anesthesia is contraindicated!

All vomiting stimulants act through the vomiting center in the brain.

The 5 main neurotransmitters involved in the vomiting pathway: 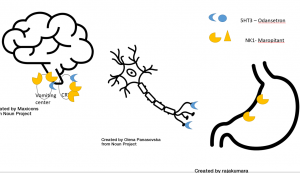 Horses can’t vomit but still have the same fluid backup. Due to the strong lower esophageal sphincter, the stomach will often rupture before the animal can actually vomit. When a horse is colicky, it can be life saving to pass a stomach tube and relieve the fluid. Instead of vomiting, we say horses are refluxing.

Cattle and camelids don’t usually vomit. In these animals the fluid that would be vomited moves into the omasum, reticulum and/or rumen (cattle) and C2 and C1 (camelids). 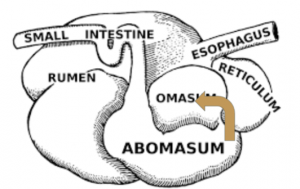 Electrolyte and acid base changes

The stomach contents are acidic. If the vomitus/reflux is due to an upper GI problem, the animal loses hydrogen and chloride. Ruminants with abomasal outflow obstruction still lose the HCl but it ends up in the rumen. All animals with an upper GI obstruction tend to hypochloremic. Cattle usually have hypochloremic metabolic alkalosis. Dehydration makes animals acidotic so small animals may not show the alkalosis but may actually be acidotic.

History and other clinical signs can be useful.

Diagnostics are often NOT performed for acute cases of vomiting. Supportive care is provided and diagnostics only performed if the animal doesn’t respond. One common “test” is response to maropitant (antinausea drug). Maropitant usually controls vomiting due to brain or non-GI lesions. If the animal continues vomiting, this is considered an indication of a surgical lesion. 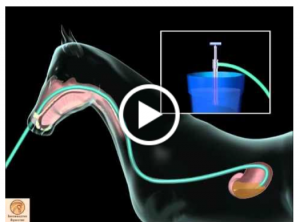 Drugs are available to block each part of the vomiting pathway in small animals. In veterinary medicine, the first line agent is typically maropitant.

Metoclopramide is used, particularly if there is a motility disorder, as it stimulates gastric emptying. Metoclopramide blocks dopaminergic function in part.

Antihistamines  can also be useful but have sedative effects as well.

In addition to identifying the underlying cause of the vomiting, complications of vomiting such as dehydration, acid-base and electrolyte abnormalities, gastroesophageal-reflux disease (GERD),  weight loss and aspiration pneumonia should be identified early in the patient assessment.

GERD occurs due to damage of the esophagus by refluxed (vomited) gastric juices. Aspiration pneumonia due to inhalation of vomitus. As stomach and biliary fluids are lost, animals may develop related electrolyte and acid-base changes. Saliva contains large amounts of bicarbonate. If the fluid lost is primarily saliva, the animal will become acidotic.

Supportive care for vomiting may include

Apomorphine is used to stimulate vomiting when an animal has ingested something it shouldn’t. Apomorphine works by stimulating dopamine receptors. Dilute hydrogen peroxide can also be used in certain species; however it is basically being used for its toxic effects, ideally at a low dose.

Ropinirole ophthalmic solution (Clevor) has recently been approved by the FDA to induce vomiting in dogs. This drug is a dopamine agonist, as well.

Vomiting should not be induced if it is more than 1-2 hours after eating (the substance has left the stomach) or if coming back up would be just as bad (alkali or corrosive substances, etc).

Digestive system part 2 – an additional look at digestion or skip to 8:50 to see the vomiting part

Colic in horses when is surgery necessary – The Horse article

Hypertrophic pyloric stenosis – occasionally seen in small animals; we do get similar conditions due to tumors and adhesions ; good anatomy/physio review

Vomiting in pigs– the pig site typically has good info!

Apomorphine administration -> vomiting; useful for toxins that have recently been ingested

Physiology of vomiting (dogs) – fancier than it needs to be

Nausea and vomiting (people); shorter than some others and easy to understand