To know how to reduce drug use, we must first know what explains it. The major explanations for drug use come from the fields of biology, psychology, and sociology.

In looking at drug use, the field of biology focuses on two related major questions. First, how and why do drugs affect a person’s behavior, mood, perception, and other qualities? Second, what biological factors explain why some people are more likely than others to use drugs?

Regarding the first question, the field of biology has an excellent understanding of how drugs work. The details of this understanding are beyond the scope of this chapter, but they involve how drugs affect areas in the brain and the neurotransmitters that cause a particular drug’s effects. For example, cocaine produces euphoria and other positive emotions in part because it first produces an accumulation of dopamine, a neurotransmitter linked to feelings of pleasure and enjoyment. 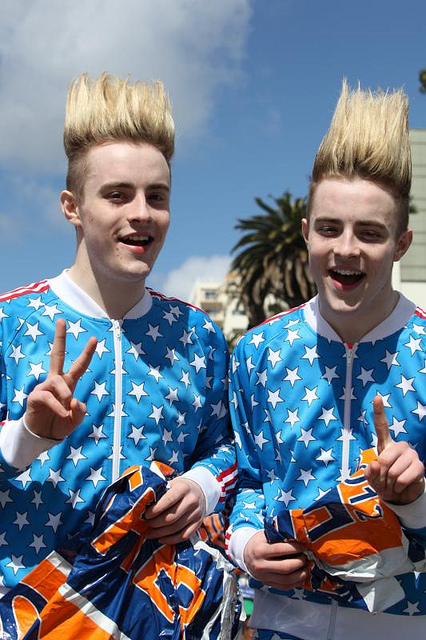 Research on identical twins suggests that alcoholism has a genetic basis.

Regarding the second question, biological research is more speculative, but it assumes that some people are particularly vulnerable to the effects of drugs. These people are more likely to experience very intense effects and to become physiologically and/or psychologically addicted to a particular drug. To the extent this process occurs, the people in question are assumed to have a biological predisposition for drug addiction that is thought to be a genetic predisposition.

Most research on genetic predisposition has focused on alcohol and alcoholism (Hanson et al., 2012). Studies of twins find that identical twins are more likely than fraternal twins (who are not genetically identical) to both have alcohol problems or not to have them. In addition, studies of children of alcoholic parents who are adopted by nonalcoholic parents find that these children are more likely than those born to nonalcoholic parents to develop alcohol problems themselves. Although a genetic predisposition for alcoholism might exist for reasons not yet well understood, there is not enough similar research on other types of drug addiction to assume that a genetic predisposition exists for these types. Many nonbiological factors also explain the use of, and addiction to, alcohol and other drugs. We now turn to these factors.

One problem with research on personality explanations is methodological: If we find personality differences between drug users and nonusers, should we conclude that personality problems cause drug use, or is it possible that drug use causes personality problems? Most of the research on personality and drug use cannot answer this question adequately, since it studies drug users and nonusers at one point in time (cross-sectional research). To answer this question adequately, longitudinal research, which examines the same people over time, is necessary. Among initial drug abstainers at Time 1, if those with the personality traits mentioned earlier turn out to be more likely than those without the traits to be using drugs at Time 2, then we can infer that personality problems affect drug use rather than the reverse. Longitudinal research on personality and drug use that studies adolescents and college students does indeed find this causal sequence (Sher, Bartholow, & Wood, 2000). However, some scholars still question the importance of personality factors for drug use and addiction (Goode, 2012). They say these factors have only a small effect, if that, and they cite research questioning whether personality differences between users and nonusers in fact exist (Feldman, Boyer, Kumar, & Prout, 2011).

Other psychological explanations are based on the classic concept from behavioral psychology of operant conditioning—the idea that people and animals are more likely to engage in a behavior when they are rewarded, or reinforced, for it. These explanations assume that people use drugs because drugs are positive reinforcers in two respects. First, drugs provide pleasurable effects themselves and thus provide direct reinforcement. Second, drug use often is communal: People frequently use drugs (alcohol is certainly a prime example, but so are many other drugs) with other people, and they enjoy this type of social activity. In this manner, drug use provides indirect reinforcement.

Sociological explanations emphasize the importance of certain aspects of the social environment—social structure, social bonds to family and school, social interaction, and culture—or drug use, depending on the type of drug. For drugs like heroin and crack that tend to be used mostly in large urban areas, the social structure, or, to be more precise, social inequality, certainly seems to matter. As sociologist Elliott Currie (1994, p. 3) has observed, the use of these drugs by urban residents, most of them poor and of color, reflects the impact of poverty and racial inequality: “Serious drug use is not evenly distributed: it runs ‘along the fault lines of our society.’ It is concentrated among some groups and not others, and has been for at least half a century.” This fact helps explain why heroin use grew in the inner cities during the 1960s, as these areas remained poor even as the US economy was growing. Inner-city youths were attracted to heroin because its physiological effects helped them forget about their situation and also because the heroin subculture—using an illegal drug with friends, buying the drug from dealers, and so forth—was an exciting alternative to the bleakness of their daily lives. Crack became popular in inner cities during the 1980s for the same reasons.

Regarding social interaction, sociologists emphasize that peer influences greatly influence one’s likelihood of using alcohol, tobacco, and a host of other drugs (Hanson et al., 2012). Much and probably most drug use begins during adolescence, when peer influences are especially important. When our friends during this stage of life are drinking, smoking, or using other drugs, many of us want to fit in with the crowd and thus use one of these drugs ourselves. In a related explanation, sociologists also emphasize that society’s “drug culture” matters for drug use. For example, because we have a culture that so favors alcohol, many people drink alcohol. And because we have a drug culture in general, it is no surprise, sociologically speaking, that drug use of many types is so common.

To the extent that social inequality, social interaction, and a drug culture matter for drug use, sociologists say, it is a mistake to view most drug use as stemming from an individual’s biological or psychological problems. Although these problems do play a role for some individuals’ use of some drugs, drug use as a whole stems to a large degree from the social environment and must be understood as a social problem, and not just as an individual problem.

Beyond these general explanations of why people use drugs, sociological discussions of drug use reflect the three sociological perspectives introduced in Chapter 1 “Understanding Social Problems”—functionalism, conflict theory, and symbolic interactionism—as we shall now discuss. Table 7.6 “Theory Snapshot” summarizes this discussion.

Recall that functionalist theory emphasizes the need for social stability, the functions that different aspects of society serve for society’s well-being, and the threats (or dysfunctions) to society’s well-being posed by certain aspects of society. In line with this theory, sociologists emphasize that drug use may actually be functional for several members of society. For the people who use legal or illegal drugs, drug use is functional because it provides them the various positive physiological effects that drugs have. For the people who sell legal or illegal drugs, drug use is functional because it provides them a major source of income. Illegal drug use is even functional for the criminal justice system, as it helps provide jobs for the police, court officials, and prison workers who deal with illegal drugs. Legal and illegal drugs also provide jobs for the social service agencies and other organizations and individuals whose work focuses on helping people addicted to a drug. At the same time, drugs, whether legal or illegal, have the many dysfunctions for society that this chapter discussed earlier, and this fact must not be forgotten as we acknowledge the functions of drugs.

Conflict theory stresses the negative effects of social inequality and the efforts of the elites at the top of society’s hierarchy to maintain their position. This theory helps us understand drugs and drug use in at least three respects. First, and as noted just earlier, much drug use in poor urban areas results from the poverty, racial inequality, and other conditions affecting people in these locations. They turn to illegal drugs partly to feel better about their situation, and partly because the illegal drug market is a potentially great source of income that does not require even a high school degree.

Second, conflict theory emphasizes that racial and ethnic prejudice and inequality help determine why some drugs are illegal as well as the criminal penalties for these drugs. For example, the penalties for crack are much harsher, gram for gram, than those for powder cocaine, even though the two drugs are pharmacologically identical. Crack users are primarily poor African Americans in urban areas, while powder cocaine users are primarily whites, many of them at least fairly wealthy. These facts prompt many observers to say that the harsher penalties for crack are racially biased (Tonry, 2011). Other evidence for this argument of conflict theory is seen in the history of the illegality of opium, cocaine, and marijuana. As we discussed earlier, racial and ethnic prejudice played an important role in why these common drugs in the nineteenth century became illegal: prejudice against Chinese immigrants for opium, prejudice against African Americans for cocaine, and prejudice against Mexican Americans for marijuana.

Third, conflict theory emphasizes the huge influence that multinational corporations have in the marketing and sale of the legal drugs—alcohol, tobacco, and many prescription drugs—that often have harmful individual and societal consequences. To maximize their profits, these companies do their best, as noted earlier, to convince Americans and people in other nations to use their products. They also spend billions of dollars to lobby Congress. As also mentioned earlier, the tobacco industry hid for years evidence of the deadly effects of its products. All these efforts illustrate conflict theory’s critical view of the role that corporations play in today’s society.

A study of drug use that reflects this approach is Howard S. Becker’s (1953) classic article, “Becoming a Marihuana User.” Becker wrote that someone usually begins smoking marijuana in the presence of friends who are experienced marijuana users. This social interaction, he argued, is critical for new users to wish to continue using marijuana. To want to do so, they must learn three behaviors or perceptions from the experienced users who are “turning them on” to marijuana use. First, new users must learn how to smoke a joint (marijuana cigarette) by deeply inhaling marijuana smoke and holding in the smoke before exhaling. Second, they must perceive that the effects they feel after smoking enough marijuana (spatial distortion, hunger pangs, short-term memory loss) signify that they are stoned (under the influence of marijuana); their friends typically tell them that if they are feeling these effects, they are indeed stoned. Third, they must learn to define these effects as pleasurable; if people suddenly experience spatial distortion, intense hunger, and memory loss, they might very well worry they are having huge problems! To prevent this from happening, their friends say things to them such as, “Doesn’t that feel great!” This and similar comments help reassure the new users that the potentially worrisome effects they are experiencing are not only bad ones but in fact very enjoyable ones.