Susan Griffin (1971, p. 26) began a classic essay on rape in 1971 with this startling statement: “I have never been free of the fear of rape. From a very early age I, like most women, have thought of rape as a part of my natural environment—something to be feared and prayed against like fire or lightning. I never asked why men raped; I simply thought it one of the many mysteries of human nature.”

When we consider interpersonal violence of all kinds—homicide, assault, robbery, and rape and sexual assault—men are more likely than women to be victims of violence. While true, this fact obscures another fact: Women are far more likely than men to be raped and sexually assaulted. They are also much more likely to be portrayed as victims of pornographic violence on the Internet and in videos, magazines, and other outlets. Finally, women are more likely than men to be victims of domestic violence, or violence between spouses and others with intimate relationships. The gendered nature of these acts against women distinguishes them from the violence men suffer. Violence is directed against men not because they are men per se, but because of anger, jealousy, and the sociological reasons discussed in Chapter 8 “Crime and Criminal Justice”’s treatment of deviance and crime. But rape and sexual assault, domestic violence, and pornographic violence are directed against women precisely because they are women. These acts are thus an extreme manifestation of the gender inequality women face in other areas of life. We discuss rape and sexual assault here but will leave domestic violence for Chapter 10 “The Changing Family” and pornography for Chapter 9 “Sexual Behavior”.

The Extent and Context of Rape and Sexual Assault

Our knowledge about the extent and context of rape and reasons for it comes from three sources: the FBI Uniform Crime Reports (UCR) and the National Crime Victimization Survey (NCVS), both discussed in Chapter 8 “Crime and Criminal Justice”, and surveys of and interviews with women and men conducted by academic researchers. From these sources we have a fairly good if not perfect idea of how much rape occurs, the context in which it occurs, and the reasons for it. What do we know? 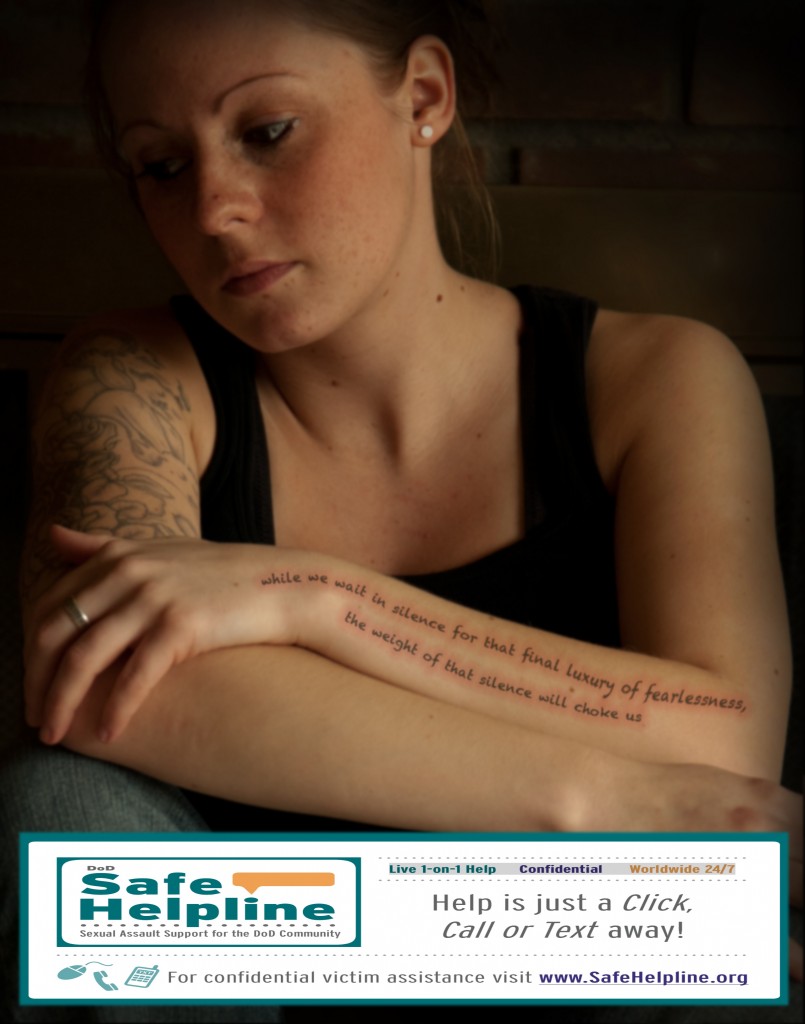 Up to one-third of US women experience a rape or sexual assault, including attempts, at least once in their lives.

According to the UCR, which are compiled by the Federal Bureau of Investigation (FBI) from police reports, 88,767 reported rapes (including attempts, and defined as forced sexual intercourse) occurred in the United States in 2010 (Federal Bureau of Investigation, 2011). Because women often do not tell police they were raped, the NCVS, which involves survey interviews of thousands of people nationwide, probably yields a better estimate of rape; the NCVS also measures sexual assaults in addition to rape, while the UCR measures only rape. According to the NCVS, 188,380 rapes and sexual assaults occurred in 2010 (Truman, 2011). Other research indicates that up to one-third of US women will experience a rape or sexual assault, including attempts, at least once in their lives (Barkan, 2012). A study of a random sample of 420 Toronto women involving intensive interviews yielded an even higher figure: Two-thirds said they had experienced at least one rape or sexual assault, including attempts. The researchers, Melanie Randall and Lori Haskell (1995, p. 22), concluded that “it is more common than not for a woman to have an experience of sexual assault during their lifetime.”

Studies of college students also find a high amount of rape and sexual assault. About 20–30 percent of women students in anonymous surveys report being raped or sexually assaulted (including attempts), usually by a male student they knew beforehand (Fisher, Cullen, & Turner, 2000; Gross, Winslett, Roberts, & Gohm, 2006). Thus at a campus of 10,000 students of whom 5,000 are women, about 1,000–1,500 women will be raped or sexually assaulted over a period of four years, or about 10 per week in a four-year academic calendar. The Note 4.33 “People Making a Difference” box describes what one group of college students did to help reduce rape and sexual assault at their campus.

Dickinson College is a small liberal-arts campus in the small town of Carlisle, Pennsylvania. But in the fight against sexual violence, it loomed huge in March 2011, when up to 150 students conducted a nonviolent occupation of the college’s administrative building for three days to protest rape and sexual assault on their campus. While they read, ate, and slept inside the building, more than 250 other students held rallies outside, with the total number of protesters easily exceeding one-tenth of Dickinson’s student enrollment. The protesters held signs that said “Stop the silence, our safety is more important than your reputation” and “I value my body, you should value my rights.” One student told a reporter, “This is a pervasive problem. Almost every student will tell you they know somebody who’s experienced sexual violence or have experienced it themselves.”

Feeling that college officials had not done enough to help protect Dickinson’s women students, the students occupying the administrative building called on the college to set up an improved emergency system for reporting sexual assaults, to revamp its judicial system’s treatment of sexual assault cases, to create a sexual violence prevention program, and to develop a new sexual misconduct policy.

Rather than having police or security guards take the students from the administrative building and even arrest them, Dickinson officials negotiated with the students and finally agreed to their demands. Upon hearing this good news, the occupying students left the building on a Saturday morning, suffering from a lack of sleep and showers but cheered that they had won their demands. A college public relations official applauded the protesters, saying they “have indelibly left their mark on the college. We’re all very proud of them.” On this small campus in a small town in Pennsylvania, a few hundred college students had made a difference.

The public image of rape is of the proverbial stranger attacking a woman in an alleyway. While such rapes do occur, most rapes actually happen between people who know each other. A wide body of research finds that 60–80 percent of all rapes and sexual assaults are committed by someone the woman knows, including husbands, ex-husbands, boyfriends, and ex-boyfriends, and only 20–35 percent by strangers (Barkan, 2012). A woman is thus two to four times more likely to be raped by someone she knows than by a stranger.

In 2011, sexual assaults of hotel housekeepers made major headlines after the head of the International Monetary Fund was arrested for allegedly sexually assaulting a hotel housekeeper in New York City; the charges were later dropped because the prosecution worried about the housekeeper’s credibility despite forensic evidence supporting her claim. Still, in the wake of the arrest, news stories reported that hotel housekeepers sometimes encounter male guests who commit sexual assault, make explicit comments, or expose themselves. A hotel security expert said in one news story, “These problems happen with some regularity. They’re not rare, but they’re not common either.” A housekeeper recalled in the same story an incident when she was vacuuming when a male guest appeared: “[He] reached to try to kiss me behind my ear. I dropped my vacuum, and then he grabbed my body at the waist, and he was holding me close. It was very scary.” She ran out of the room when the guest let her leave but did not call the police. A hotel workers union official said housekeepers often refused to report sexual assault and other incidents to the police because they were afraid they would not be believed or that they would get fired if they did so (Greenhouse, 2011, p. B1).

Sociological explanations of rape fall into cultural and structural categories similar to those presented earlier for sexual harassment. Various “rape myths” in our culture support the absurd notion that women somehow enjoy being raped, want to be raped, or are “asking for it” (Franiuk, Seefelt, & Vandello, 2008). One of the most famous scenes in movie history occurs in the classic film Gone with the Wind, when Rhett Butler carries a struggling Scarlett O’Hara up the stairs. She is struggling because she does not want to have sex with him. The next scene shows Scarlett waking up the next morning with a satisfied, loving look on her face. The not-so-subtle message is that she enjoyed being raped (or, to be more charitable to the film, was just playing hard to get).

A related cultural belief is that women somehow ask or deserve to be raped by the way they dress or behave. If she dresses attractively or walks into a bar by herself, she wants to have sex, and if a rape occurs, well, then, what did she expect? In the award-winning film The Accused, based on a true story, actress Jodie Foster plays a woman who was raped by several men on top of a pool table in a bar. The film recounts how members of the public questioned why she was in the bar by herself if she did not want to have sex and blamed her for being raped.

A third cultural belief is that a man who is sexually active with a lot of women is a stud and thus someone admired by his male peers. Although this belief is less common in this day of AIDS and other STDs, it is still with us. A man with multiple sex partners continues to be the source of envy among many of his peers. At a minimum, men are still the ones who have to “make the first move” and then continue making more moves. There is a thin line between being sexually assertive and sexually aggressive (Kassing, Beesley, & Frey, 2005).

These three cultural beliefs—that women enjoy being forced to have sex, that they ask or deserve to be raped, and that men should be sexually assertive or even aggressive—combine to produce a cultural recipe for rape. Although most men do not rape, the cultural beliefs and myths just described help account for the rapes that do occur. Recognizing this, the contemporary women’s movement began attacking these myths back in the 1970s, and the public is much more conscious of the true nature of rape than a generation ago. That said, much of the public still accepts these cultural beliefs and myths, and prosecutors continue to find it difficult to win jury convictions in rape trials unless the woman who was raped had suffered visible injuries, had not known the man who raped her, and/or was not dressed attractively (Levine, 2006).

Structural explanations for rape emphasize the power differences between women and men similar to those outlined earlier for sexual harassment. In societies that are male dominated, rape and other violence against women is a likely outcome, as they allow men to demonstrate and maintain their power over women. Supporting this view, studies of preindustrial societies and of the fifty states of the United States find that rape is more common in societies where women have less economic and political power (Baron & Straus, 1989; Sanday, 1981). Poverty is also a predictor of rape; although rape in the United States transcends social class boundaries, it does seem more common among poorer segments of the population than among wealthier segments, as is true for other types of violence (Truman & Rand, 2010). Scholars think the higher rape rates among the poor stem from poor men trying to prove their “masculinity” by taking out their economic frustration on women (Martin, Vieraitis, & Britto, 2006).