Shakespeare once wrote that “what’s past is prologue.” This familiar phrase means that what happened in the past provides a context for, and can help to understand and predict, the future. To the extent that the past is prologue, the history of drug use provides a sobering lesson: Drug use has been common since ancient times and has been common in almost every society. As a recent book on drug policy states, “People have used chemicals to alter their state of mind since before there were written records” (Kleiman, Caulkins, & Hawken, 2011, p. xviii). If past is indeed prologue, then it is no surprise that drug use remains common in contemporary nations despite considerable efforts to reduce it.

One manifestation of the long history of drug use is that humans have used mind-altering plants since prehistoric times. “Early humans discovered that eating some plants gave a feeling of relaxation, happiness, drowsiness, or peace,” one scholar writes. “Some gave a feeling of increased energy, alertness, and stamina. And some caused strange sensations, terrifying visions, or a profoundly different awareness” (Gahlinger, 2004, p. 5). 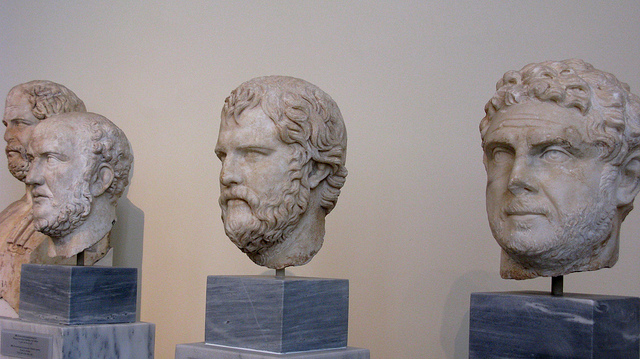 Ancient Greeks drank poppy juice, which contained opium, around 300 BCE. Use of other drugs was also common in ancient times.

Examples of drug use thousands of years ago abound (Escohotado, 2010; Faupel, Horowitz, & Weaver, 2010; Goodman, Sherratt, & Lovejoy, 2007). Mead, an alcoholic drink made from fermented honey, was first used about 8000 BCE, and beer and berry wines were first used about 6000 BCE. The ancient Sumerians used opium starting about 5000 BCE. Ancient Egypt used alcohol in 3500 BCE, while ancient China used cannabis (the source of marijuana) around 3000 BCE. Ancient people in what is now Switzerland ate poppy seeds (the source of opium) in 2500 BCE. Coca leaves (the source of cocaine) have been chewed for thousands of years. Folk medicines made from plants and herbs have also been used since ancient times. People in ancient Palestine drank wine in 350 BCE. Ancient Greeks drank poppy juice in 300 BCE. In about the same period, South American tribes used a hallucinogen called cohoba, made from mimosa beans. The Chinese and other Asians were using opium regularly by 1000 CE. Native Americans used tobacco before being discovered by Columbus in 1492. The use of various drugs has also been common in the many societies that anthropologists have studied (Durant & Thakker, 2003; Page & Singer, 2010).

Sociologist Erich Goode (2008, p. 176) summarizes the history of drug use as follows: “Humans have been ingesting drugs for thousands of years. And throughout recorded time, significant numbers of nearly every society on earth have used one or more drugs to achieve certain desired physical or mental states. Drug use comes close to being a universal, both worldwide and throughout history.”

Drug Use in US History

This history of drug use includes the United States, where past is again prologue. During the colonial era, tobacco was a major crop in Virginia and other colonies thanks to slave labor. After being processed, it was commonly used by colonists and also exported to Europe in great quantities (Gately, 2001). From the earliest colonial days, alcohol was another drug used in great quantities, as “Americans were drinkers right from the start” (Genzlinger, 2011, p. C1). The Mayflower, the celebrated ship that brought the first Puritans to what eventually became the United States, was filled with barrels of beer. In colonial New England, rum manufacturing was a major industry, and rum drinking was common. During the early 1770s, New England had more than 140 rum distilleries, and rum consumption in the colonies averaged 7.5 million gallons annually. This massive drinking has led one author to call rum “the real spirit of 1776” (Williams, 2006). Rum was also a major export to Europe and elsewhere. In addition to rum, colonists routinely drank beer and hard cider.

During the nineteenth century, Americans began to use drugs other than alcohol in great quantities. One popular drug was coffee. Before the Civil War, Americans who drank coffee had to buy green (unroasted) coffee beans in bulk and roast their own coffee. Then in 1865, John Arbuckle, a Pittsburgh grocer, began selling roasted coffee inside a new invention—the paper bag. His bagged coffee was an instant hit across the nation, other coffee manufacturers followed suit, and coffee use by Americans greatly increased.

Alcohol also remained a very popular drug, and use of this drug during the 1800s was probably greater than during colonial America. Two reasons help account for this trend (Faupel et al., 2010). One reason was the western frontier. As the nation moved west, many of the explorers and settlers who led the way were men who were unmarried or, if married, men who had left their families behind. To put it mildly, they drank a lot, fought a lot, and gambled a lot. A second reason was that many Irish immigrants came to the United States during a great wave of immigration that began in the mid-nineteenth century. Although it might sound like a stereotype, the Irish drank a lot of alcohol back in their homeland, and they continued to do so once they reached the United States. Regardless of who was drinking, heavy alcohol use contributed greatly to poverty, to physical assaults and homicides, and to domestic violence and other family problems.

Three other popular drugs in this era were opium, cocaine, and marijuana. Use of these drugs was so common that nineteenth-century America has been called a “dope fiend’s paradise” (Brecher, 1973). A brief discussion of these drugs’ histories will underscore the widespread use of drugs in the American past and also racial issues that arose when laws were passed to ban these drugs (Musto, 1999).

During the decades before and after the Civil War, the use of opium was extremely common (Goode, 2012). Beyond making people feel good, opium is an effective painkiller and cough suppressant. Accordingly, it was a staple in many patent medicines, elixirs and tonics, sold back then in apothecaries, general stores, and other venues. Large numbers of people from all social backgrounds used these opium-laced medicines for problems such as depression, headaches, menstrual cramps, and toothaches. It is not much of an exaggeration to say that the United States was a nation of opium users during this period; an estimated 500,000 Americans were addicted to opium by the end of the century. As anthropologist Robert B. Edgerton (1976, pp. 57–58) summarizes the situation, “The use of opium was widespread in all segments of American society. Children were calmed with opium derivatives, women used many popular patent medicines which were liberally larded with opiates, and ‘opium dens’ were probably present in all cities and most towns as well.” 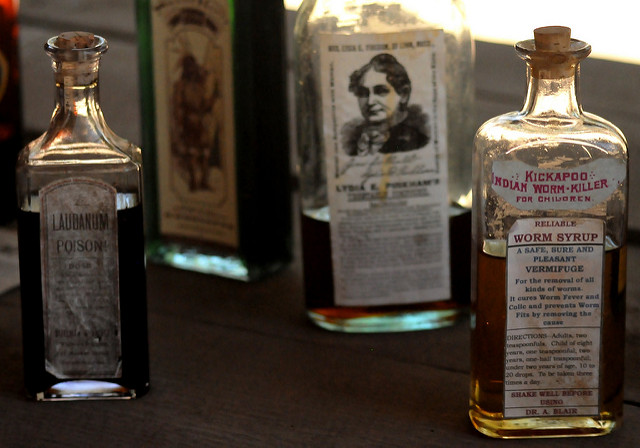 Opium was a common ingredient in nineteenth-century tonics and elixirs that were sold widely to the public.

Attendance at opium dens (the equivalent of today’s bar or tavern, with opium the drug of choice rather than alcohol) was a popular activity for the Chinese immigrants who began coming to the United States during the 1850s to help build the nation’s railroads and perform other jobs. White workers feared their growing numbers as a threat to their jobs, and racial prejudice against the Chinese increased. Politicians, labor unions, and other parties began to focus on the Chinese habit of smoking opium at opium dens and warned that the Chinese were kidnapping little white children, taking them to the opium dens, and turning them into “opium fiends.” This campaign had two effects: it increased prejudice against the Chinese, and it increased public concern about opium. This rising concern led San Francisco in 1875 to become the first locality to ban opium dens. Other California cities did the same, and the state itself banned opium dens in 1881. Three decades later, the federal government banned the manufacture, sale, and use of opium (except for use with a physician’s prescription) when it passed the Harrison Narcotics Act in 1914.

Cocaine was another drug that was very popular in the nineteenth century, beginning in the 1880s, thanks in part to enthusiastic claims by Sigmund Freud and American physicians that cocaine could help relieve asthma, depression, hay fever, sexual impotence, toothache pain, and a host of other problems. Like opium, cocaine was a popular ingredient in the many patent medicines that people bought at various stores, and the US Army Surgeon-General advocated its medical use. It was a major ingredient in a new beverage introduced in 1886, Coca-Cola, which became an instant hit because people naturally felt so good when they drank Coke! During the next two decades, however, concern grew about cocaine’s effects. Some of this concern was fueled by the absurd belief that African Americans who used cocaine became extra strong, dangerous, and even invulnerable to bullets. Cocaine was heavily taxed by the 1914 Harrison Narcotics Act and later banned.

A third legal drug during the late nineteenth century was marijuana. It joined opium and cocaine in being a common ingredient in patent medicines, and it was a popular drug for problems like migraine headaches, menstrual cramps, and toothache pain. After the Mexican Revolution of 1910, Mexicans moved to the United States in increased numbers and brought with them their habit of marijuana use. Whites feared that Mexicans would take their jobs, and, similar to what happened with opium and Chinese immigrants during the 1870s, began to charge that Mexicans who used marijuana would become violent and more likely to rape and murder innocent white victims. This racially prejudiced claim increased concern about marijuana and helped lead to the federal Marijuana Tax Act of 1937 that banned its use.

This brief history shows that drug use has been part of the American culture ever since the nation began. If past is prologue, it should come as no surprise that drugs remain part of the American culture today, and it should also come as no surprise that efforts to reduce or eliminate drug use often meet with much resistance and little success. As the United States continues to try to deal with drug use, these basic facts must not be forgotten.