We begin our analysis of fiscal policy with an examination of government purchases, transfer payments, and taxes in the U.S. economy.

While government spending has grown over time, government purchases as a share of GDP generally declined from over 20% until the early 1990s to under 18% in 2001. Since then, though, the percentage of government purchases in GDP began to increase back toward 20%, first as military spending picked up and then more recently to over 20% during the 2007-2009 recession. 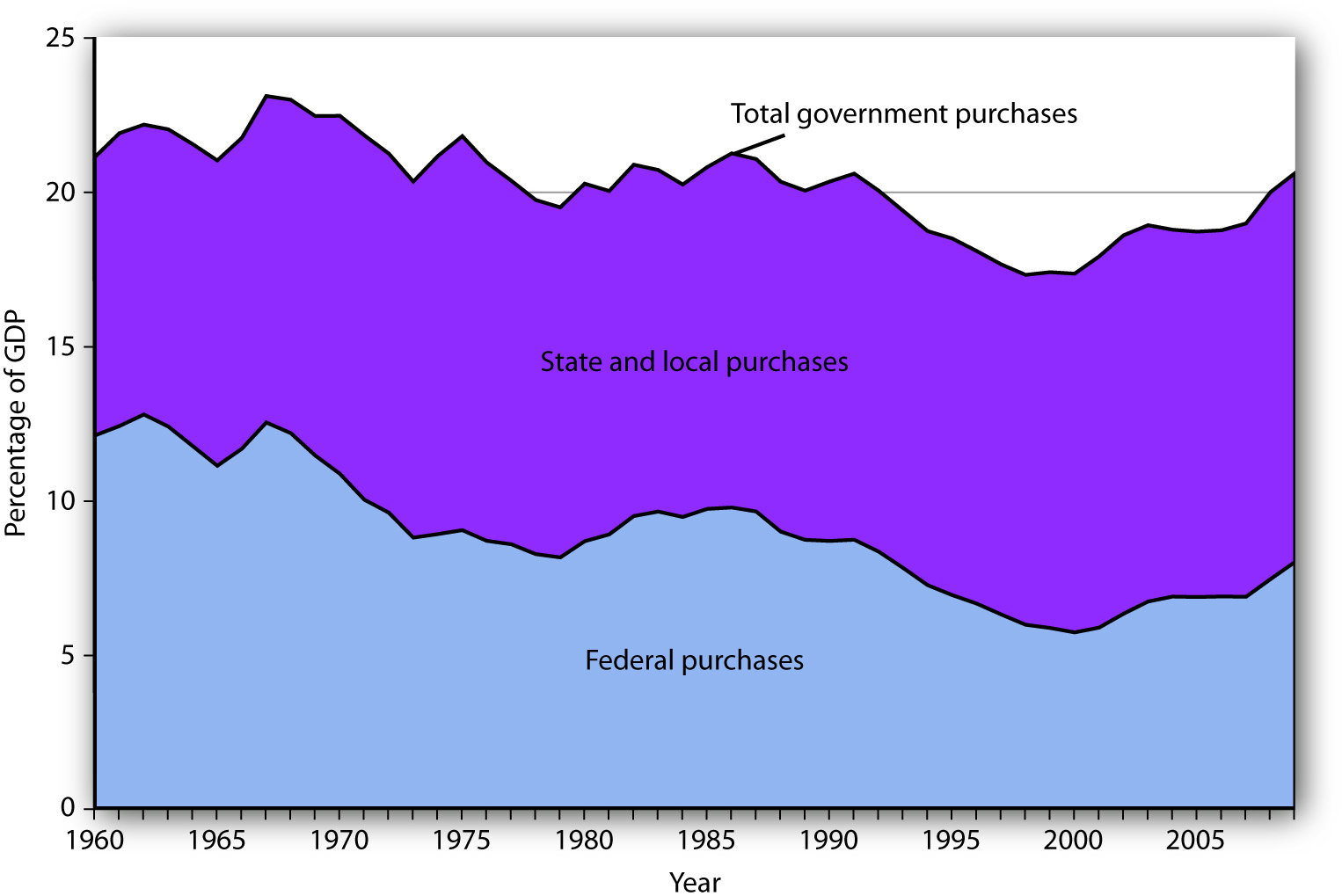 A transfer payment is the provision of aid or money to an individual who is not required to provide anything in exchange. Social Security and welfare benefits are examples of transfer payments.  During the 2007-2009 recession, transfers again rose. 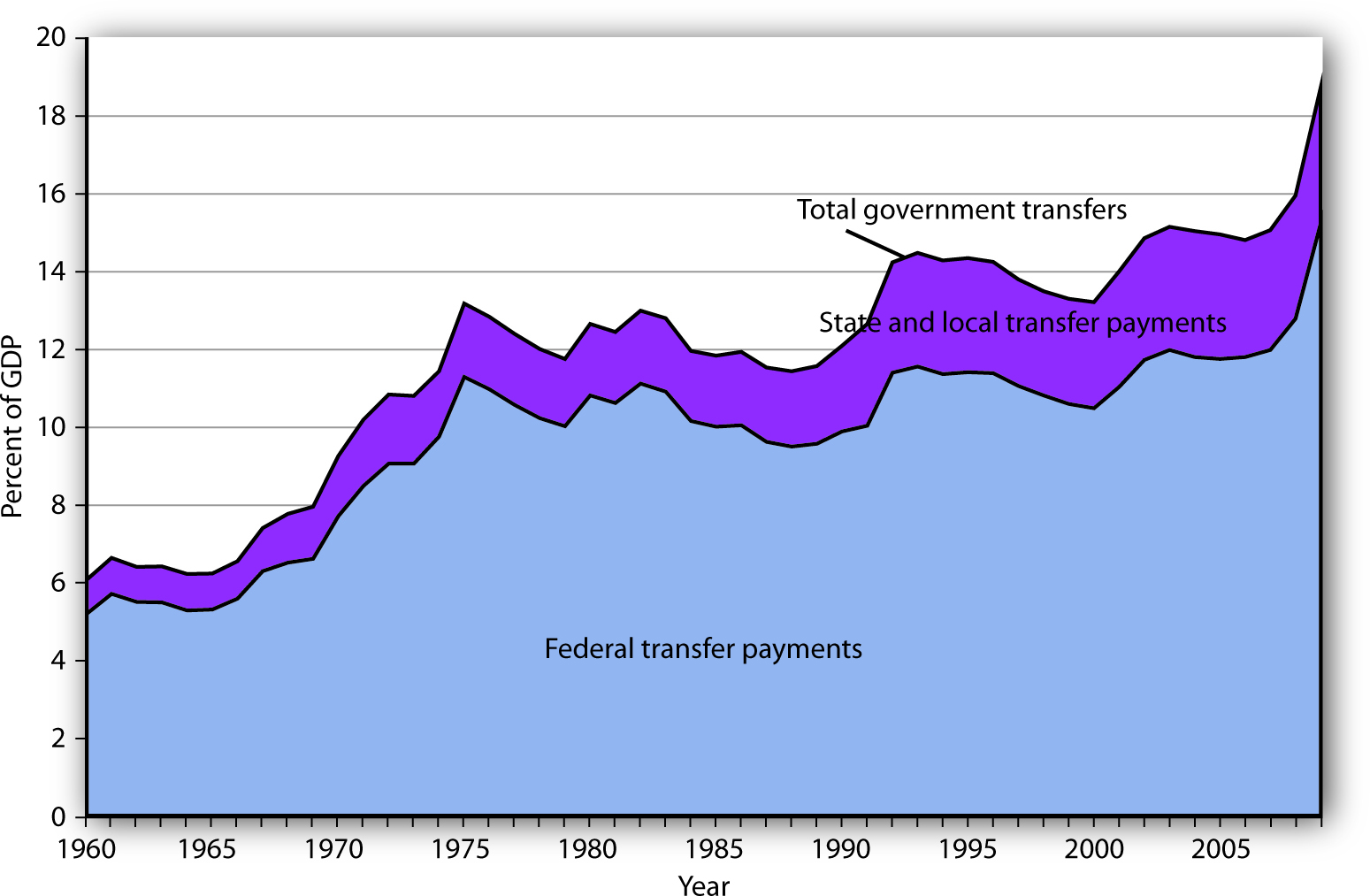 The chart shows transfer payment spending as a percentage of GDP from 1960 through 2009. This spending rose dramatically relative to GDP during the late 1960s and the 1970s as federal programs expanded. More recently, sharp increases in health-care costs have driven upward the spending for transfer payment programs such as Medicare and Medicaid. Transfer payments fluctuate with the business cycle, rising in times of recession and falling during times of expansion. As such, they rose sharply during the deep 2007-2009 recession. 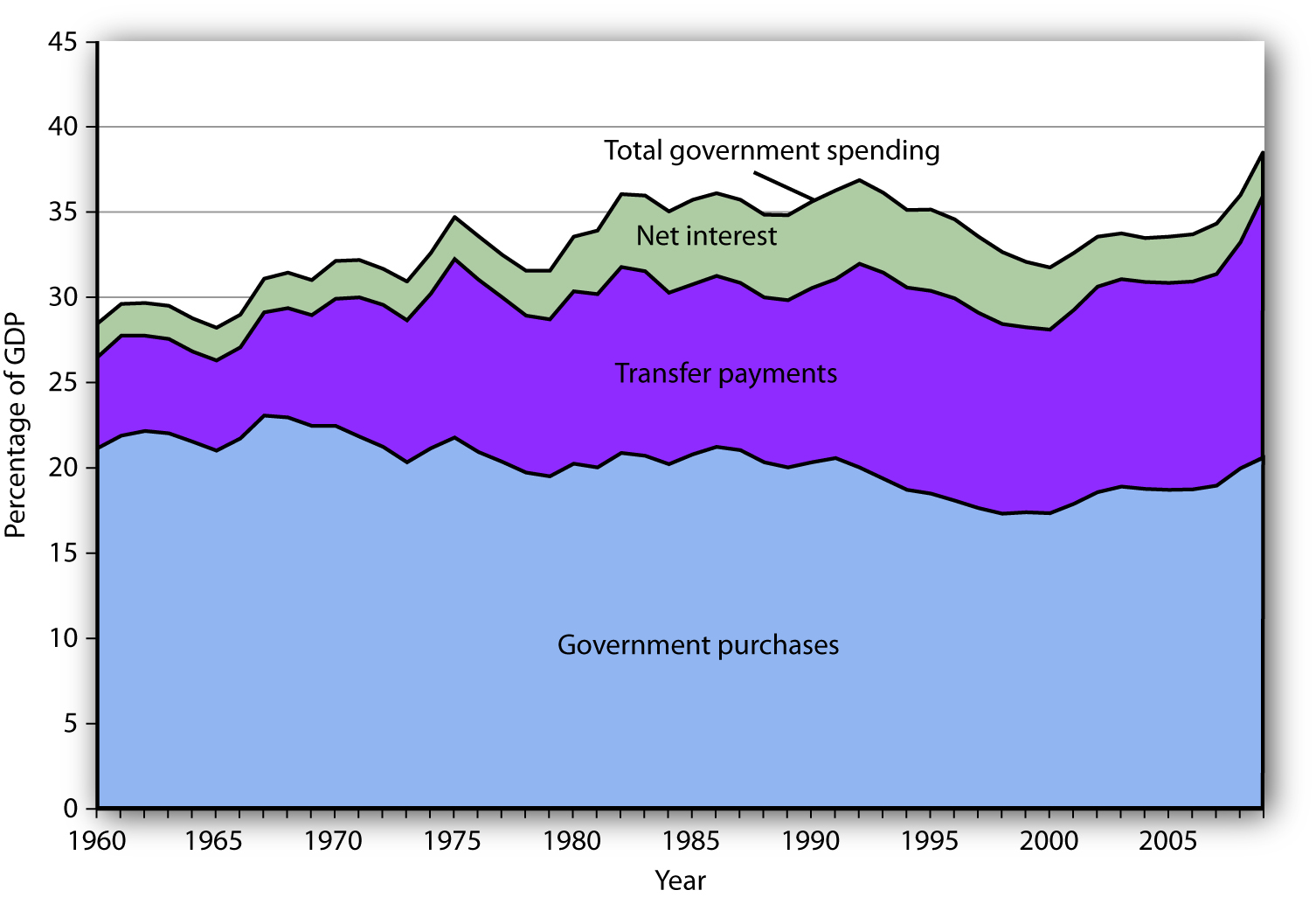 The bulk of federal receipts come from the personal income tax and from payroll taxes. State and local tax receipts are dominated by property taxes and sales taxes. The federal government, as well as state and local governments, also collects taxes imposed on business firms, such as taxes on corporate profits. Figure 27.4 “The Composition of Federal, State, and Local Revenues” shows the composition of federal, state, and local receipts in a recent year.

Figure 27.4 The Composition of Federal, State, and Local Revenues 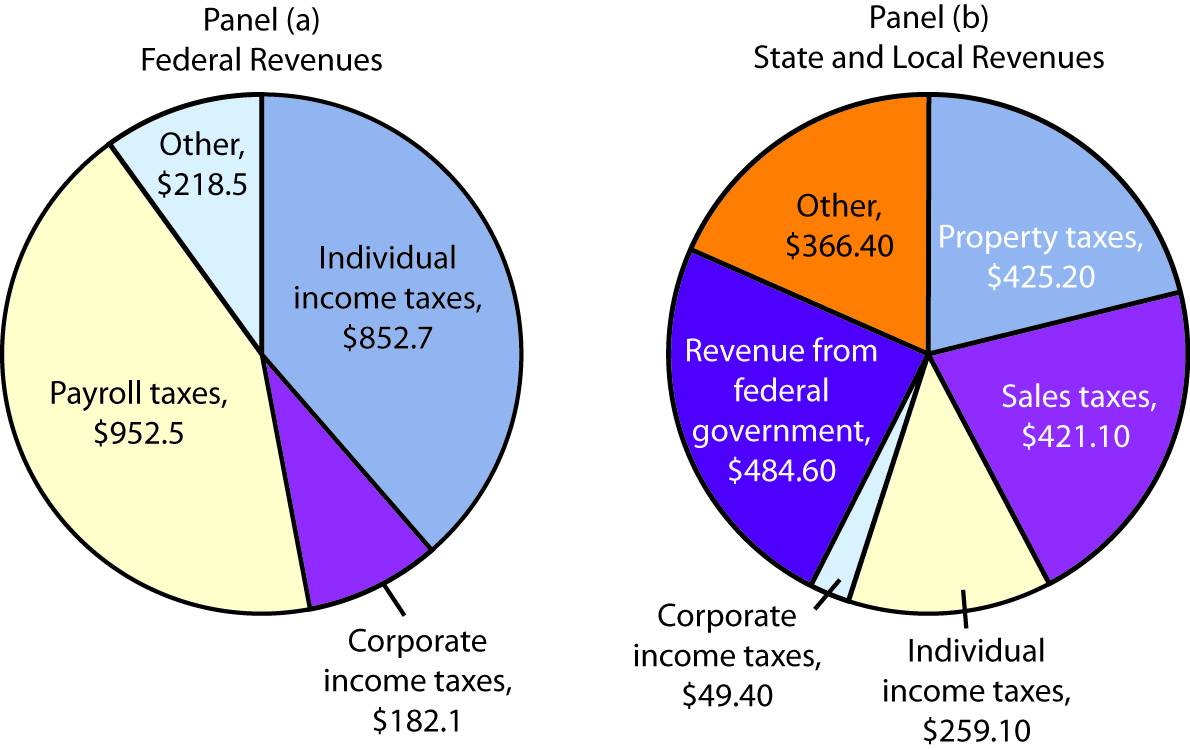 Federal receipts come primarily from payroll taxes and from personal taxes such as the personal income tax. State and local tax receipts come from a variety of sources; the most important are property taxes, sales taxes, income taxes, and grants from the federal government. Revenue shares are for 2009.

Figure 27.5 “Government Revenue and Expenditure as a Percentage of GDP, 1960–2009” compares federal, state, and local government revenues to expenditures relative to GDP since 1960. The government’s budget was generally in surplus in the 1960s, then mostly in deficit since, except for a brief period between 1998 and 2001. Bear in mind that these data are for all levels of government. 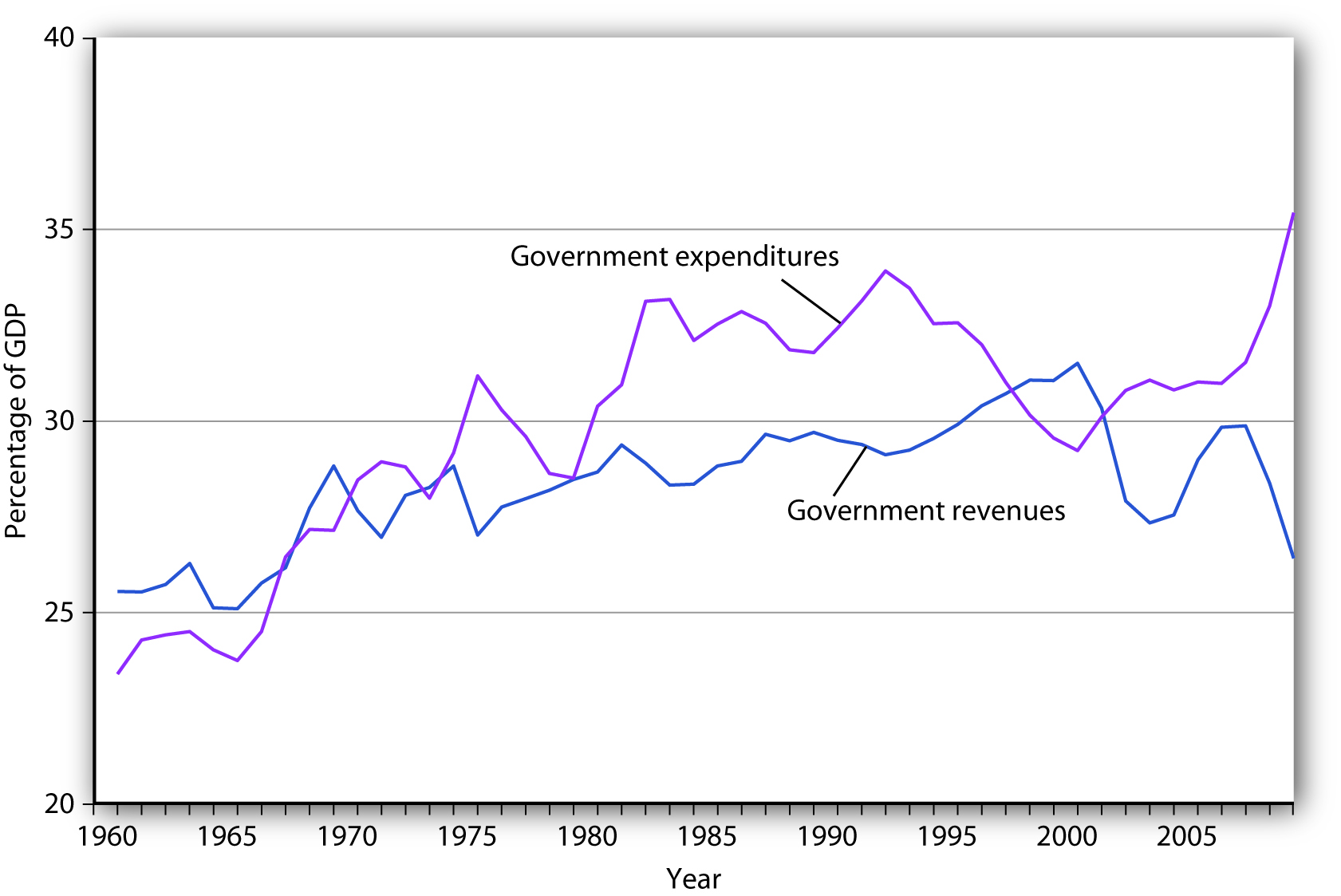 The government’s budget was generally in surplus in the 1960s, then mostly in deficit since, except for a brief period between 1998 and 2001.

The administration of George W. Bush saw a large increase in the federal deficit. In part, this is the result of the government’s response to the terrorist attacks in 2001. It also results, however, from large increases in federal spending at all levels together with tax cuts in 2001, 2002, and 2003. The federal deficit is projected to be even larger during the administration of Barack Obama.

The national debt is the sum of all past federal deficits, minus any surpluses. Figure 27.6 “The National Debt and the Economy, 1929–2009” shows the national debt as a percentage of GDP. It suggests that, relative to the level of economic activity, the debt is well below the levels reached during World War II. The ratio of debt to GDP rose from 1981 to 1996 and fell in the last years of the 20th century; it began rising again in 2002. 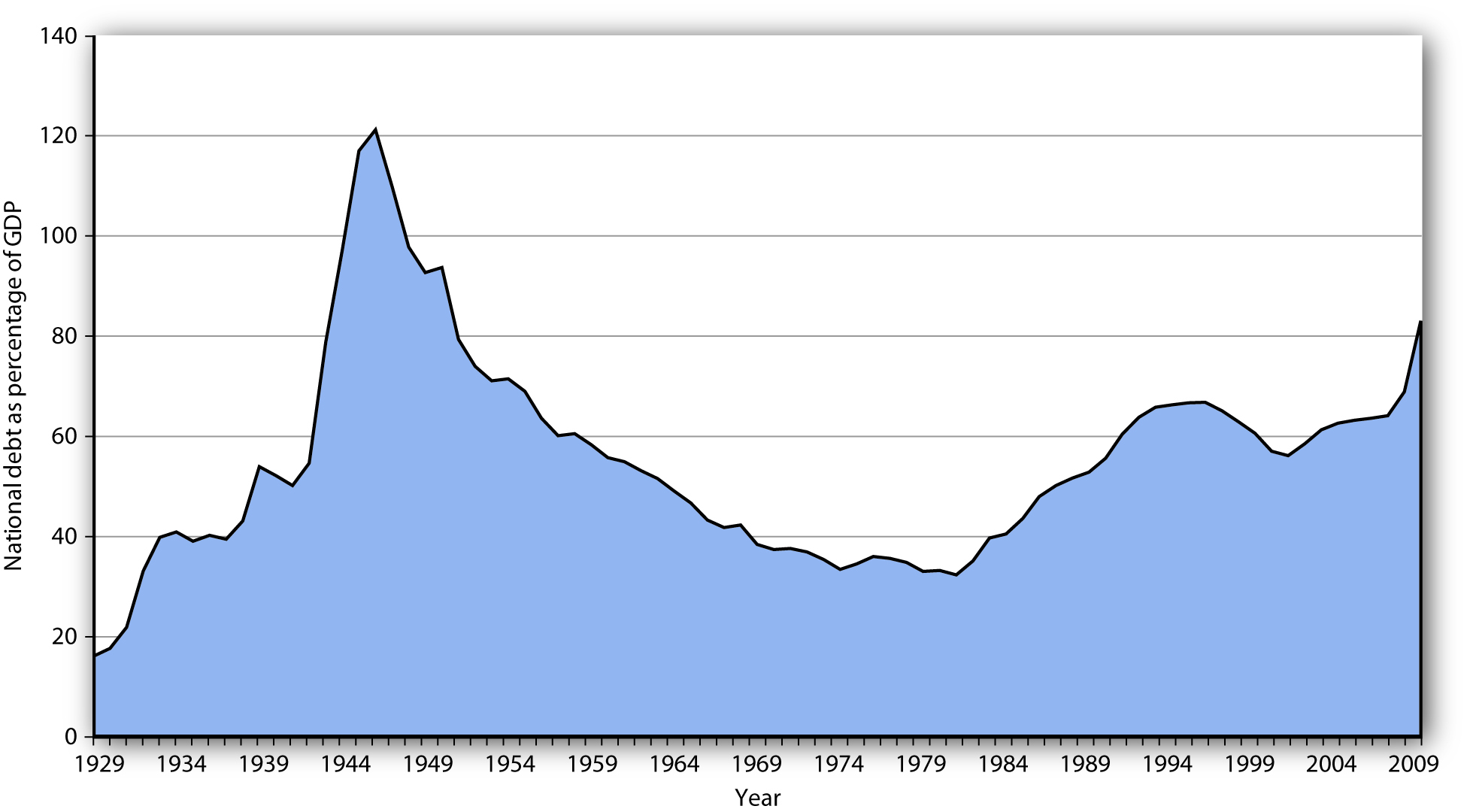 The national debt relative to GDP is much smaller today than it was during World War II. The ratio of debt to GDP rose from 1981 to 1996 and fell in the last years of the 20th century; it began rising again in 2002. 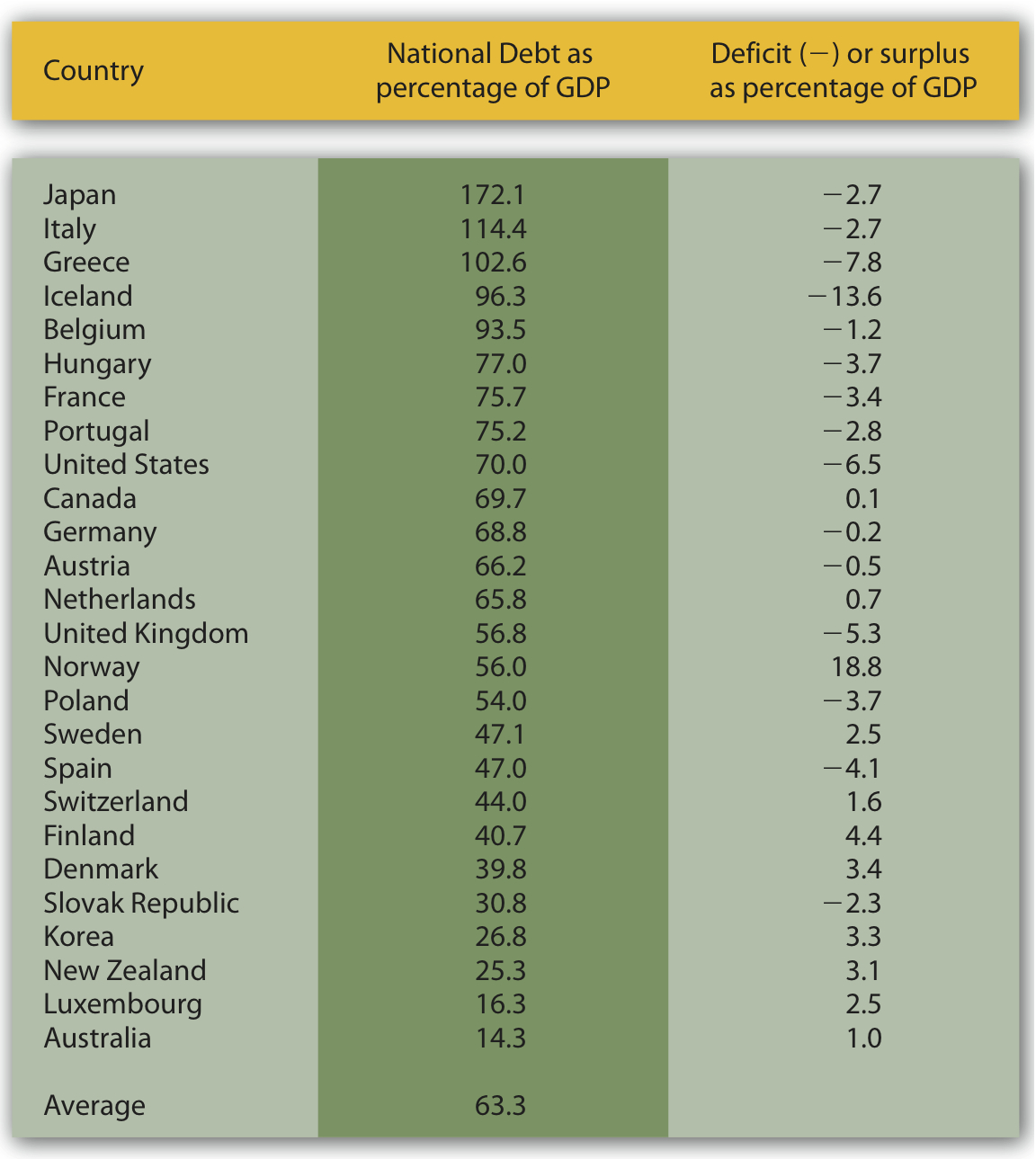 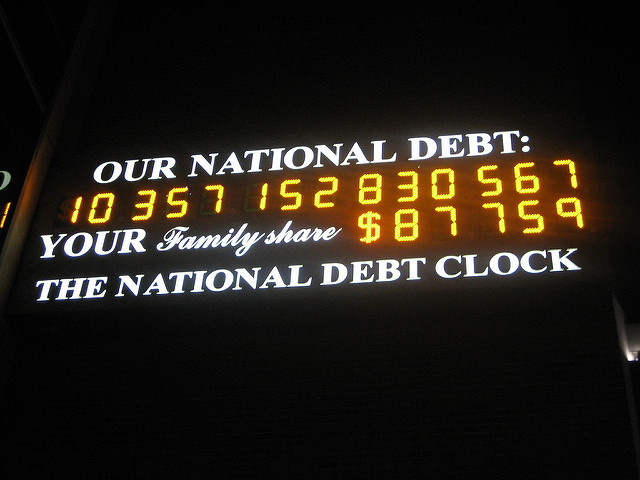 As populations age, the burden of current fiscal policy is increasingly borne by younger people in the population. In most countries, economists computing generational accounts have found that people age 40 or below will pay more in taxes than they receive in transfer payments, while those age 60 or above will receive more in transfers than they pay in taxes. The differences are huge. According to a recent study by Jagadeesh Gokhale, summarized in the table below, in 2004 in the United States, a male age 30 could expect to pay $201,300 more than he receives in government transfers during his lifetime, while another male age 75 could expect to receive $171,100 more in transfers than he paid in taxes during his lifetime. That is a difference of $372,400! For future generations, those born after the year 2004, the difference is even more staggering. A male born after the year 2005 can expect to pay $332,200 more in taxes than he will receive in transfer payments. For a woman, the differences are also large but not as great. A woman age 30 in 2004 could expect to pay $30,200 more in taxes than she will receive in transfers during her lifetime, while a woman age 75 could expect to receive transfers of $184,100 in excess of her lifetime tax burden.

The table below gives generational accounting estimates for the United States for the year 2004 for males and females. Notice that the net burden on females is much lower than for males. That is because women live longer than men and thus receive Social Security and Medicare benefits over a longer period of time. Women also have lower labor force participation rates and earn less than men, and pay lower taxes as a result.

Table 27.1 Generational Accounts for the United States (thousands of 2004 dollars)

Generational accounting has its critics—for example, the table above only measures direct taxes and transfers but omits benefits from government spending on public goods and services. In addition, government spending programs can be modified, which would alter the impact on future generations. Nonetheless, it does help to focus attention on the sustainability of current fiscal policies. Can future generations pay for Social Security, Medicare, and other retirement and health care spending as currently configured? Should they be asked to do so?