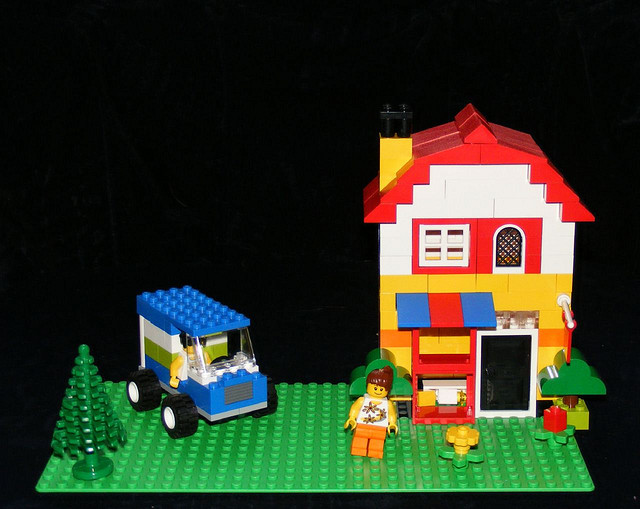 LEGO has decided to go back to basics and focus on the classic bricks rather than complicated kits.

Did you play with LEGO blocks when you were a kid? Almost everyone did. They were a big deal. Store shelves were stacked with boxes of plastic bricks, wheels, and windows, plus packages containing just the pieces you needed to make something special, like a LEGO helicopter. McDonald’s put LEGO sets in Happy Meals. If you walk down a toy-store aisle today, you’ll still find LEGOs. They’re shelved alongside the XBOX Kinect, Buzz Lightyear, and other playthings that appeal to contemporary kids. Like these products, they’re more sophisticated. They’re often tied in with movies, such as Toy Story, Cars, Star Wars, and Harry Potter.

Nowadays, the seventy-nine-year old Denmark company is doing very well: in 2010, its sales rose 37 percent and profits were up 70 percent (Reuters, 2011). The LEGO Group has moved its way up to the fifth largest toy company in the world based on sales (Brown, 2011). Things were very different seven years earlier—LEGO sales had declined drastically in the early 2000s. In its 2003 annual report, its CEO admitted that “2003 was a very disappointing year for LEGO Company.” Net sales fell by 26 percent, resulting in a loss in earnings for the year and significant decline in market share. LEGO planned to drop many of its recent initiatives and focus on its classic LEGO brick products (LEGO Group, 2003).

Let’s look closer and find out what happened to the LEGO brand prior to its turnaround seven years ago. It was moving through stages of development and decline (KeepMedia, 2004; KeepMedia, 2004; Fishman, 2001). Marketers call this process the product life cycle, which is illustrated in Figure 9.13 “The Product Life Cycle”. In theory, it’s a lot like the life cycle that people go through. Once it’s developed, a new product is introduced to the market. With any success at all, it begins to grow, attracting more buyers. At some point, the market stabilizes, and the product becomes mature. Eventually, however, its appeal diminishes, and it’s overtaken by competing brands or substitute products. Sales decline, and it’s ultimately taken off the market.

This is a simplified version of the cycle. There are lots of exceptions to the product life-cycle rules. For one thing, most products never make it past the introduction stage; they die an early death. Second, some products (like some people) avoid premature demise by reinventing themselves. This is what the LEGO Group did. The company had been reinventing itself during the fifteen-year period of 1990 to 2005, launching new products in an effort to recover its customer base and overcome a series of financial crises. Unfortunately, this strategy was unsuccessful. As pointed out by its CEO, the introduction of new products and the resulting costs “have not produced the desired results. In some cases,” admits the company, “new products have even cannibalized on the sales of LEGO Company’s core products and thus eroded earnings” (LEGO Group, 2003).

A take-over threat by Mattel Toy Company forced its CEO into action (Batra, 2010). His first stop in formulating a resurrection plan was to fly to Virginia and attend a convention for adult fans of LEGO’s. The attendees’ stories of how LEGOs helped shape their minds gave him hope that the family-owned company could be saved. He returned to Denmark and put into place a plan that included downsizing the number of employees, selling its LEGOLAND theme parks, simplifying product designs, cutting unprofitable product lines, and focusing on what made the company great: LEGO building blocks.

As a product or brand moves through its life cycle, the company that markets it will shift its marketing-mix strategies. Let’s see how the mix might be changed at each stage.

At this stage, most companies invest in advertising to make consumers aware of a product. If it faces only limited competition, it might use a skimming-pricing approach. Typically, because it will sell only a relatively small quantity of the product, it will distribute through just a few channels. Because sales are low while advertising and other costs are high, the company tends to lose money during this stage.

As the company focuses on building sales, which are increasing rapidly at this stage, its advertising costs will go up. If competition appears, it may respond by lowering prices and distributing through multiple distribution channels. With sales going up and costs going down, the product becomes more profitable.

If a product survives the growth stage, it will probably remain in the maturity stage for a long time. Sales still grow, though at a decreasing rate, and will eventually stabilize. Advertising will be used to differentiate the product from competition. Price wars may occur, but profits will be good because sales volume will remain high. As the product becomes outdated, the company may make changes in keeping with changing consumer preferences.

In 2004, LEGO was in this stage: demand had declined as more innovative products absorbed the attention of kids. Price competition had become more intense, and profits were harder to come by; in fact, in some years, they had turned into losses. But, unlike most products that enter the decline stage, LEGO avoided its likely demise by reinventing itself. Now, as the Danish phrase leg godt, from which the name LEGO was coined, suggests, children all over the world can take out their LEGOs and “play-well.”