We expect companies to recognize issues of social importance and to address them responsibly. The companies that do this earn reputations as good corporate citizens and enjoy certain benefits, such as the ability to keep satisfied customers, to attract capital, and to recruit and retain talented employees. But companies don’t become good corporate citizens overnight. Learning to identify and develop the capacity to address social concerns takes time and requires commitment. The task is arduous because so many different issues are important to so many different members of the public—issues ranging from the environment, to worker well-being (both at home and abroad), to fairness to customers, to respect for the community in which a company operates.

The Five Faces of Corporate Responsibility

Faced with public criticism of a particular practice, how does a company respond? What actions does it take to demonstrate a higher level of corporate responsibility? According to Harvard University’s Simon Zadek, exercising greater corporate responsibility generally means going through the series of five different stances summarized in Figure 2.13 “Stages of Corporate Responsibility” (Zadek, 2004). 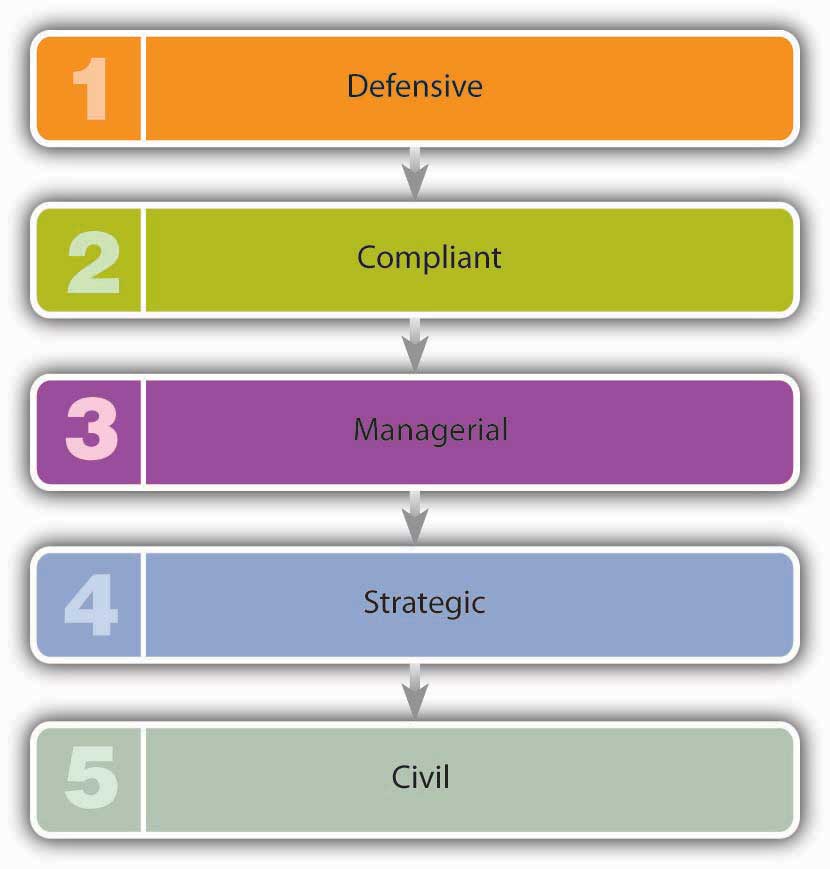 Here’s Your Salad—How About Fries?

Several years ago, McDonald’s found itself in a public relations nightmare. The fast-food giant faced massive public criticism for serving unhealthy food that contributed to a national epidemic of obesity. Let’s look at McDonald’s responses to these criticisms and assess how far along the five-stage process the company has progressed.

As the documentary film Super Size Me demonstrated, a steady diet of McDonald’s burgers and fries will cause you to gain weight. It was certainly inevitable that one day the public would make a connection between the rising level of obesity in the United States and a diet heavy in fat-laden fast foods. McDonald’s fast food/obesity link got a lot of attention in 2002 when obese adults and teenagers filed suits against the company, claiming it was responsible for their excess pounds. McDonald’s reaction to the public outcry against the company’s menu items was defensive. For example, an owner of seven McDonald’s in midtown Manhattan said, “We offer healthy choices. It is up to individuals to set limits and to be informed.…McDonald’s discloses nutritional information about its foods in its restaurants” (Burritt, 2005).

In early 2004, the public’s attention was drawn to McDonald’s “super-size” options. Despite the fact that a super-sized meal delivered more than fifteen hundred calories, one in ten customers went for the upgrade. McDonald’s faced daily criticisms on its super-sizing campaign, from nutritionists, doctors, advocacy groups, and lawyers who held it up as a “grossly overweight” poster child for U.S. obesity concerns. And the company feared public criticism would escalate when the movie Super Size Me hit the theaters. The documentary tells the story of a young man who gained twenty-four pounds and wrecked his health by eating only McDonald’s food for a month. Even worse, one scene shows him getting sick in his car after trying to wolf down a super-size meal. So McDonald’s immediately moved from the defensive stage to the compliant stage and announced that it was eliminating its super-size option by the end of 2004. The move, though small, was in the right direction. It was touted by the company as a “menu simplification” process, but a spokesman did state, “It certainly is consistent with and on a parallel path with our ongoing commitment to a balanced lifestyle” (Horovitz, 2004).

Criticism of McDonald’s continued as customers stayed away and its profits plummeted. The company searched for ways to win back customers and keep them long-term. To do this, it would have to come up with a healthier menu. Though McDonald’s had served salads for years, they weren’t very good. The company got serious about salads and introduced new, improved “premium salads,” complete with Newman’s Own salad dressing (a nice public relations touch, as all profits on the salad dressings are donated to charities). The company also improved the Happy Meal by letting kids substitute apple slices and low-fat milk for the usual fries and soda. Oprah Winfrey’s personal trainer was brought in to promote an adult version of the Happy Meal, called the GoActive meal, which includes a salad, a bottle of water, a book on nutrition, and a clip-on pedometer that measures the number of steps you take. The fat calories in Chicken McNuggets were lowered by coming out with all-white-meat McNuggets. And to appease those between-meal munchies, the company added a fruit-and-walnut salad to its menu. McDonald’s goal was to convince customers that it had turned a corner and would forever more offer healthy choices to both adults and children.

The new focus on healthy choices worked, and customers started returning. McDonald’s salads were well received and accounted for about 10 percent of sales. Overall, things improved financially for the company: Sales increased and profits rose. To complete the transition to a healthier image, McDonald’s came up with a new theme: helping adults and children live a balanced, active lifestyle. To go along with the theme, it launched a new active-life public-awareness campaign with the tagline “It’s what I eat and what I do…I’m lovin’ it.” McDonald’s demonstrated its concern for the health of its customers through permanent menu changes and an emphasis on the value of physical fitness. Even Ronald McDonald, the company’s mascot, helped out by shooting hoops with NBA basketball star Yao Ming. The company launched a program called GoActive to help people find fun ways to build physical activity and fitness into their daily lives.

McDonald’s hasn’t advanced to the final stage yet; it hasn’t enlisted the cooperation of other fast-food companies in encouraging children and adults to eat healthier foods. It’s difficult to predict whether it will assume this role in the future, or even whether the company will stick with its healthier lifestyle theme. Indeed, it’s hard to reconcile McDonald’s commitment to helping people eat healthier with a promotion in the Chicago area that gave a free forty-two-ounce “super-size” soda to anyone buying a Big Mac and fries. Given that a Big Mac and medium fries deliver 910 calories, it’s hard to justify encouraging customers to pile on an additional 410 calories for a big drink (at least, it’s hard to justify this if you’re promoting yourself as a company helping people eat better) (Herman, 2005).

Faced with public criticism of a particular practice, a company is likely to progress through five different stages:

This chapter discusses a five-stage process that companies go through in responding to public criticism. Consider the situation in which McDonald’s found itself when it faced massive public criticism for serving unhealthy food that contributed to a national epidemic of obesity. Given what you know about the company’s reaction, identify the steps that it took in response to this criticism. In particular, show how its responses do or don’t reflect the five stages of corporate responsibility outlined in the chapter. In your opinion, how far along the five-stage process has McDonald’s progressed?