Today, virtually everyone agrees that companies must figure out how to produce products without compromising the right of future generations to meet their own needs. Clearly, protecting natural resources is the right thing to do, but it also has become a business necessity. Companies’ customers demand that they respect the environment. Let’s identify some key environmental issues and highlight the ways in which the business community has addressed them.

The land we live on has been polluted by the dumping of waste and increasing reliance on agricultural chemicals. It’s pockmarked by landfills stuffed with the excess of a throwaway society. It’s been strip-mined and deforested, and urban sprawl on every continent has squeezed out wetlands and farmlands and destroyed wildlife habitats. 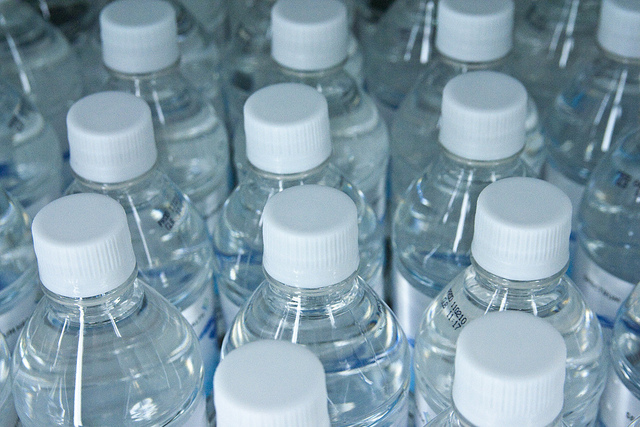 Did you know your cozy fleece jacket is most likely made from recycled plastic bottles?

Protecting the land from further damage, then, means disposing of waste in responsible ways (or, better yet, reducing the amount of waste). At both national and global levels, we must resolve the conflicts of interest between those who benefit economically from logging and mining and those who argue that protecting the environment is an urgent matter. Probably municipalities must step in to save open spaces and wetlands.

Clothing manufacturer Patagonia has for years been in the forefront of efforts to protect the land. Each year, the company pledges either 1 percent of sales revenue or 10 percent of profits (whichever is larger) to protect and restore the natural environment (Patagonia Web site, 2011). According to its “Statement of Purpose,” “Patagonia exists as a business to inspire and implement solutions to the environmental crisis.” Instead of traditional materials for making clothes (such as regular cotton and fleece), Patagonia relies on organically grown cotton, which is more expensive, because it doesn’t requires harmful chemicals (Patagonia Web site “Fabric”, 2011). Its fleece products are made with postconsumer recycled (PCR) fleece, which is actually made with recycled plastic bottles. So far, the company’s efforts to build a more sustainable system has saved 86 million plastic bottles from ending up in landfills (Patagonia Web site, “Fabric”, 2011).

It’s amazing what we can do to something as large as the atmosphere. Over time, we’ve managed to pollute the air with emissions of toxic gases and particles from factories, power plants, office buildings, cars, trucks, and even farms. In addition, our preferred method of deforestation is burning, a major source of air pollution. In some places, polluted air causes respiratory problems, particularly for the young and elderly. Factory emissions, including sulfur and other gases, mix with air and rain to produce acid rain, which returns to the earth to pollute forests, lakes, and streams. Perhaps most importantly, many experts—scientists, government officials, and businesspeople—are convinced that the heavy emission of carbon dioxide is altering the earth’s climate. Predictions of the effect of unchecked global warming include extreme weather conditions, flooding, oceanic disruptions, shifting storm patterns, droughts, reduced farm output, and even animal extinctions (Carey, 2004).

Curbing global warming will require international cooperation. More than 190 nations (though not the United States) have stated their support for this initiative by endorsing the Kyoto Protocol, an agreement to slow global warming by reducing worldwide carbon-dioxide emissions.

What can business do? They can reduce greenhouse emissions by making vehicles, factories, and other facilities more energy efficient. In response to a government ban on chlorofluorocarbons, which damage the ozone layer, DuPont has cut its own greenhouse emissions by 72 percent over the last twenty years through improvements in manufacturing processes and a commitment to increased energy efficiency (Carey, 2004; DuPont Web site, 2011).

Water makes up more than 70 percent of the earth’s surface, and it’s no secret that without it we wouldn’t be here. Unfortunately, that knowledge doesn’t stop us from polluting our oceans, rivers, and lakes and generally making our water unfit for use. Massive pollution occurs when such substances as oil and chemicals are dumped into bodies of water. The damage to the water, to the marine ecosystem, and to coastal wildlife from the accidental spilling of oil from supertankers and offshore drilling operations can be disastrous, and the cleanup can cost billions. Most contaminants, however, come from agricultural fertilizers, pesticides, wastewater, raw sewage, and silt that make their way into water systems over time (Krantz & Kifferstein, 2006). In some parts of the world—including certain areas in this country—water supplies are dwindling, partly because of diminishing rainfall and partly because of increased consumption.

The Environmental Protection Agency (EPA) has been a major force in cleaning up U.S. waters. Companies are now held to stricter standards in the discharge of wastes into water treatment systems. In some places, particularly where water supplies are dangerously low, such as the Southwest, local governments have instituted conservation programs. In Arizona (which suffers a severe shortage), Home Depot works with governmental and nongovernmental agencies on a $1.8 million water-conservation campaign. From its forty stores, the company runs weekend workshops to educate consumers on conservation basics, including drought-resistant gardening techniques (Kotler & Lee, 2004).

Did you ever read (or have read to you) The Lorax, a well-known children’s book, written by Dr. Seuss in 1971?1 It tells the story of how a business owners’ greed destroyed an ecosystem. To manufacture and sell a product that the owner argued everyone needed, he cut down the trees in the forest, polluted the river, and fouled the air. These actions destroyed the habitat for the bears that lived on the fruit that fell from the trees, the fish that swam in the streams and the birds that flew high up in the sky. In 1971, these actions were not viewed negatively; business owners believed that the purpose of business was to make a profit without regard for the effect on the environment.

This book was written for young people, but it sends an important message to today’s business executives. When it was written in 1971, few business people listened to its message. But, they seem to be listening now. Over the past ten to fifteen years, most of our large corporations have adopted measures that would have pleased environmentalists. These initiatives fall under the umbrella called “sustainability.” But what does sustainability mean? There are, of course, many definitions, but here is one that should work for us: sustainability—the principle of providing products today that don’t compromise the ability of future generations to meet their needs2. Companies that undertake sustainability initiatives believe that meeting business needs and protecting the environment are not mutually exclusive. They must do both.

How would you like a job in the sustainability field? Well twenty-six-year-old Robyn Beavers has one. As Google’s Chief Sustainability Officer she runs the company’s “Green Biz Ops” [Green Business Operations] and is responsible for reducing Google’s impact on the environment (Keefe, 2011).
The 9,200 solar panels that were recently installed at the company’s corporate headquarters (the world’s biggest solar power system) will certainly reduce the company’s use of electricity supplied from fossil fuels. When she’s not finding ways to reduce Google’s footprint on the world, she keeps busy making sure Google’s offices are green—energy efficient, built with cradle-to-cradle products, and healthy. She gets to pick out carpeting that can be returned to the manufacturer when it’s worn out so it can be ground up and used to make other rugs, rather than sit in a landfill decaying. She OKs window shades and other textiles used in the cubicles only after she is assured they are toxin-free. And she makes sure there is plenty of filtered water for everyone and 90 percent fresh air coming into the building during the day. Although she has a lot of leeway in making decisions, each project has to be reviewed to be sure it adds value and makes financial sense.

Google, like many other companies who are proactive in environmental and social responsibility issues often have a “triple bottom line” focus. They believe that the current reporting model of one bottom line—profit—does not capture all the dimensions of performance. They argue instead that companies should measure performance using three separate bottom lines: profit, people, and planet (or the 3Ps). In addition to reporting profit through their income statement, companies should also report their progress in being socially responsible to other people (stakeholders, including employee, customers, owners) and to the planet (the environment)3.

It’s very popular today for company spokespersons to brag about the great things their companies are doing to help the environment. Condé Nast, a worldwide magazine publishing company, questioned whether many of these vocal companies have earned bragging rights or whether they’re merely engaging in self-serving marketing stunts. After extensive research, Condé Nast created two lists: the “Green 11 roster of good guys” and the “Toxic 10” list of offenders that could be doing more to help the environment. Review Condé Nast’s findings in its article “The Toxic Ten” (at http://www.portfolio.com/news-markets/national-news/portfolio/2008/02/19/10-Worst-Corporate-Polluters). Select one of the companies spotlighted. Go to that company’s Web site and read about its environmental efforts. Then answer the following questions:

1The Lorax was written by Dr. Seuss. It was first published in 1971 by Random House, New York. The copyright was renewed in 1999.

2For an excellent overview of sustainability, watch a short animated movie explaining sustainability at www.youtube.com/watch?v=B5NiTN0chj02 min – April 9, 2010 – Uploaded by RealEyesvideo and created by RealEyes by Igloo Animations.