We can now get back to your role in this case, though doing so means first taking a closer look at further aspects of your roommate’s role. You and your roommate are being sued by the homeowner for a different type of tort—a negligence tort, which results not from intentional wrongdoing, but from carelessness. When he placed that can of paint at his feet, where he might easily dislodge it as he moved around the platform, your roommate allowed his conduct to fall below a certain standard of care—namely, the degree of care necessary to protect others from an unreasonable likelihood of harm.

Elements of a Negligence Claim

To prove that the act in question was negligent, the homeowner must demonstrate the four elements of a negligence claim (Cheesman, 2006):

At this point, you yourself may still want to ask an important question: “Why me?” Why should you be held liable for negligence? Undoubtedly you owed your client (the homeowner) a duty of care, but you personally did nothing to breach that duty. And if you didn’t breach any duty of care, how could you have been the cause, either actual or proximate, of any injury suffered by your client? Where does he get off suing you for negligence?

The Law of Contracts

To answer these questions, we must enter an extremely important area of civil law—the law of contracts. A contract is an exchange of promises or an exchange of a promise for an act, and because it involves an exchange, it obviously involves at least two parties. As you can see in Figure 16.1 “Parties to a Contract”, an offeror makes an offer to enter into a contract with an offeree. The offeror offers to do something in particular (or to refrain from doing something in particular), and if the offeree accepts this offer, a contract is created. As you can also see, both offer and acceptance must meet certain conditions.

Figure 16.1 Parties to a Contract

A contract is legally enforceable: if one party fails to do what he or she has promised to do, the other can ask the courts to enforce the agreement or award damages for injury sustained because the contract has been breached—because a promise made under the contract hasn’t been kept or an act hasn’t been performed. A contract, however, can be enforced only if it meets four requirements (Cheesman, 2006):

Here’s where you come in: an employment relationship like the one that you had with your roommate is a contract. Under this contract, both parties have certain duties (you’re obligated to compensate your roommate, for instance, and he’s obligated to perform his assigned tasks in good faith). The law assumes that, when performing his employment duties, your employee is under your control—that you control the time, place, and method of the work (Moran, 2008). This is a key concept in your case.

U.S. law governing employer-employee contracts derives, in part, from English common law of the seventeenth century, which established the doctrine known as respondeat superior—“Let the master answer [for the servant’s actions].” This principle held that when a servant was performing a task for a master, the master was liable for any damage that the servant might do (a practical consideration, given that servants were rarely in any position to make financial restitution for even minor damages) (Kubasek et. al., 2009; Law Library, 2008). Much the same principle exists in contemporary U.S. employment law, which extends it to include the “servant’s” violations of tort law. Your client—the homeowner—has thus filed a respondeat superior claim of negligence against you as your roommate’s employer.

In judging your responsibility for the damages done to the homeowner’s car by your employee, the court will apply a standard known as scope of employment: an employee’s actions fall within the scope of his employment under two conditions: (1) if they are performed in order to fulfill contractual duties owed to his employer and (2) if the employer is (or could be) in some control, directly or indirectly, over the employee’s actions (Law Library, 2008).

If you don’t find much support in these principles for the idea that your roommate was negligent but you weren’t, that’s because there isn’t much. Your roommate was in fact your employee; he was clearly performing contractual duties when he caused the accident, and as his employer, you were, directly or indirectly, in control of his activities. You may argue that the contract with your roommate isn’t binding because it was never put in writing, but that’s irrelevant because employment contracts don’t have to be in writing (Moran, 2008). You could remind the court that you repeatedly told your employee to put his paint bucket in a safer place, but this argument won’t carry much weight: in general, courts consider an employee’s forbidden acts to be within the scope of his employment (Law Library, 2008).

On the other hand, the same principle protects you from liability in the assault-and-battery case against your roommate. The court will probably find that his aggressive response to the neighbor’s comment wasn’t related to the business at hand or committed within the scope of his employment; in responding to the neighbor’s insult to his intelligence, he was acting independently of his employment contract with you.

Finally, now that we’ve taken a fairly detailed look at some of the ways in which the law works to make business relationships as predictable as possible, let’s sum up this section by reminding ourselves that the U.S. legal system is also flexible. In its efforts to resolve your case, let’s say that the court assesses the issues as follows:

The damage to the homeowner’s car amounts to $3,000. He can’t recover anything from your roommate, who owns virtually nothing but his personal library of books on medieval theology. Nor can he recover anything from your business-liability insurer because you never thought your business would need any insurance (and couldn’t afford it anyway). So that leaves you: can the homeowner recover damages from you personally? Legally, yes: although you didn’t go through the simple formalities of creating a sole proprietorship (see Chapter 4 “Selecting a Form of Business Ownership”), you are nevertheless liable for the contracts and torts of your business. On the other hand, you’re not worth much more than your roommate, at least when it comes to financial assets. You have a six-year-old stereo system, a seven-year-old panel truck, and about $200 in a savings account—what’s left after you purchased the two ladders and the platform that you used as scaffolding. The court could order you to pay the $3,000 out of future earnings but it doesn’t have to. After all, the homeowner knew that you had no business-liability insurance but hired you anyway because he was trying to save money on the cost of painting his house. Moreover, he doesn’t have to pay the $3,000 out of his own pocket because his personal-property insurance will cover the damage to his car.

You should probably consider yourself lucky. Had your case gone to court, it would have been subject to the rules of civil procedure outlined in Figure 16.2 “Stages in a Civil Lawsuit”. As you might suspect, civil suits are time-consuming. Research shows that litigation takes an average of 24.2 months from the time a complaint is filed until a judgment is rendered (25.6 months if you’re involved in a tort lawsuit).

Figure 16.2 Stages in a Civil Lawsuit 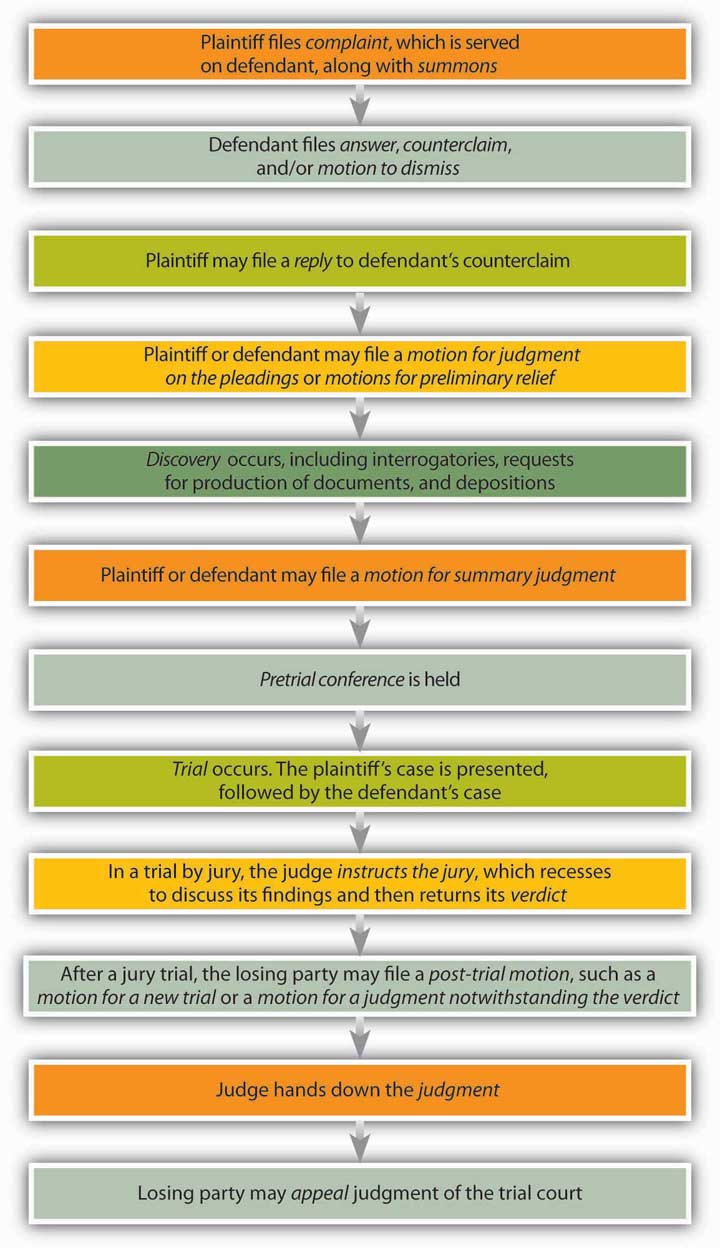 And of course it’s expensive. Let’s say that you have a $40,000-a-year job and decide to file a civil suit. Your lawyer will charge you between $200 and $350 an hour. At that rate, he or she will consume your monthly net income of about $1,800 in nine hours’ worth of work. But what about your jury award? Won’t that more than compensate you for your legal fees? It depends, but bear in mind that, according to one study, the median award in civil cases is $33,000 (Judicial Council of California, 2008) (Cohen & Smith, 2004). And you could lose.

Let’s say you own a used car business and offer to sell a customer a used car for $5,000. What is needed to create a binding contract for the sale of the car?

If, when the customer wants to go for a test drive, the salesperson drives into a tree and is injured, is your company liable? Why, or why not?