Monetary policy is exercised by the Federal Reserve System (“the Fed”), which is empowered to take various actions that decrease or increase the money supply and raise or lower short-term interest rates, making it harder or easier to borrow money. When the Fed believes that inflation is a problem, it will use contractionary policy to decrease the money supply and raise interest rates. When rates are higher, borrowers have to pay more for the money they borrow, and banks are more selective in making loans. Because money is “tighter”—more expensive to borrow—demand for goods and services will go down, and so will prices. In any case, that’s the theory. 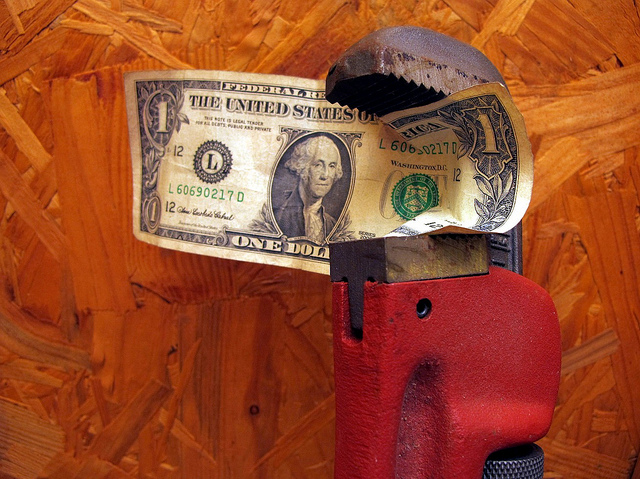 The Fed will typically tighten or decrease the money supply during inflationary periods, making it harder to borrow money.

To counter a recession, the Fed uses expansionary policy to increase the money supply and reduce interest rates. With lower interest rates, it’s cheaper to borrow money, and banks are more willing to lend it. We then say that money is “easy.” Attractive interest rates encourage businesses to borrow money to expand production and encourage consumers to buy more goods and services. In theory, both sets of actions will help the economy escape or come out of a recession.

As you can see in Figure 1.13 “The U.S. National Debt, 1940–2010”, this number has risen dramatically in the last sixty-five years. The significant jump that starts in the 1980s reflects several factors: a big increase in government spending (especially on defense), a substantial rise in interest payments on the debt, and lower tax rates. As of this writing, your share is $46,146.21. If you want to see what the national debt is today—and what your current share is—go on the Web to the U.S. National Debt Clock (http://www.brillig.com/debt_clock).

In the preceding discussion, we’ve touched on two main areas in the field of economics: (1) macroeconomics, or the study of the economy as a whole, and (2) microeconomics, or the study of the economic choices made by individual consumers or businesses. Macroeconomics examines the economy-wide effect of inflation, while microeconomics considers such decisions as the price you’re willing to pay to go to college. Macroeconomics investigates overall trends in imports and exports, while microeconomics explains the price that teenagers are willing to pay for concert tickets. Though they are often regarded as separate branches of economics, we can gain a richer understanding of the economy by studying issues from both perspectives. As we’ve seen in this chapter, for instance, you can better understand the overall level of activity in an economy (a macro issue) through an understanding of supply and demand (a micro issue).