In addition to using networks for information sharing within the organization, companies use networks to communicate and share information with those outside the organization. All this is made possible by data communication networks, which transmit digital data (numeric data, text, graphics, photos, video, and voice) from one computer to another using a variety of wired and wireless communication channels. Let’s take a closer look at the networking technologies that make possible all this electronic communication—in particular, the Internet (including the World Wide Web), intranets, and extranets.

The Internet and the World Wide Web

Though we often use the terms Internet and World Wide Web interchangeably, they’re not the same thing (Webopedia, 2011). The Internet is an immense global network comprising smaller interconnected networks linking millions of computers around the world. Originally developed for the U.S. military and later adapted for use in academic and government research, the Internet experienced rapid growth in the 1990s, when companies called Internet service providers were allowed to link into the Internet infrastructure in order to connect paying subscribers. Today, Internet service providers, such as CompuServe, America Online (AOL), MSN, and Comcast, enable us to use the Internet to communicate with others through e-mail, texting, instant messaging, online conferencing, and so on. These services also connect us with third-party providers of information, including news stories, stock quotes, and magazine articles.

The World Wide Web (or simply “the Web”) is just a portion of the Internet—albeit a large portion. The Web is a subsystem of computers that can be accessed on the Internet using a special protocol, or language, known as hypertext transfer protocol (HTTP). What’s the difference between the Internet and the Web? According to Tim Berners-Lee (one of the small team of scientists who developed the concept for the Web in 1989), the Internet is a network of networks composed of cables and computers. You can use it to send “packets” of information from one computer to another, much like sending a postcard. If the address on the packet is accurate, it will arrive at the correct destination in much less than a second. Thus, the Internet is a packet-delivery service that delivers such items as e-mail messages all over the globe. The Web, by contrast, is composed of information—documents, pictures, sounds, streaming videos, and so on. It’s connected not through cables, but rather through hypertext links that allow users to navigate between resources on the Internet (Griffiths, 2011).

Because it’s driven by programs that communicate between computers connected to the Internet, the Web couldn’t exist without the Internet. The Internet, on the other hand, could exist without the Web, but it wouldn’t be nearly as useful. The Internet itself is enormous, but it’s difficult to navigate, and it has no pictures, sounds, or streamed videos. They exist on computers connected to the Web, which also makes it much easier to retrieve information. The creation of Web browsers—software, such as Microsoft’s Internet Explorer and Netscape Navigator, that locates and displays Web pages—opened up the Internet to a vast range of users. Almost 80 percent of individuals in the United States use the Internet regularly (Internet World Stats, 2011; Kessler, 2011). So, who’s in charge of the Web? No one owns it, but an organization called the World Wide Web Consortium (W3C) oversees the development and maintenance of standards governing the way information is stored, displayed, and retrieved on it (Wikipedia, 2011).

The Technology of the Web

Let’s look a little more closely at some of the technologies that enable us to transmit and receive data over the Web. Documents on the Web are called Web pages, and they’re stored on Web sites. Each site is maintained by a Webmaster and opens with a home page. Each Web page is accessed through a unique address called a uniform resource locator (URL). For example, if you want to find statistics on basketball star LeBron James, you could type in the URL address http://www.nba.com/home/playerfile/lebron_james. The prefix http:// is the protocol name, http://www.nba.com the domain name, playerfile the subdirectory name, and lebron_james the document name (or Web page). A computer that retrieves Web pages is called a Web server. A search engine is a software program that scans Web pages containing specified keywords and provides a list of documents containing them. The most popular search engine is Google; others include Bing, Yahoo!, Ask, and AOL.

What’s the difference among the Internet, an intranet, and an extranet? It depends on who can and can’t access the information on the network. The Internet is a public network that anyone can use. A company’s intranet, on the other hand, is a private network using Internet technologies that’s available only to employees; access is controlled by a software program called a firewall. The information available on an intranet varies by company but may include internal job postings, written company policies, and proprietary information, such as price lists meant for internal use only.

An extranet is an intranet that’s partially available to certain parties outside the organization. Say, for example, you’ve posted the following information on your intranet: company policies, payroll and benefit information, training programs, parts specifications and inventories, and production schedules. To allow suppliers to bid on contracts, you might give them access to sections of the site disclosing parts specifications, inventories, and production schedules. All other sections would be off limits. You’d control access to employee-only and supplier-accessible sections by means of usernames and passwords. As you can see from Figure 15.9 “How an Extranet Works”, which illustrates some of the connections made possible by an extranet, access can be made available to customers and business partners, as well.

Figure 15.9 How an Extranet Works

Why Business Uses the Internet

By posting a Web site, a company can tell people about itself, its products, and its activities. Customers can also check the status of orders or account balances. Information should always be current, complete, and accurate. Customers should be able to find and navigate the site, which should be able to accommodate them during high-use periods.

Some companies use the Internet to sell and deliver such digital products as subscriptions to online news services, software products and upgrades, and music and video products. In these businesses, the timely delivery of products is crucial. Sales of digital products over the Internet are expected to increase substantially in the future, particularly sales of digital music (Sisario, 2011; Phillips. 2004).

E-purchasing (which was introduced in Chapter 11 “Operations Management in Manufacturing and Service Industries”) saves time, speeds up delivery, reduces administrative costs, and fosters better communications between a firm and its suppliers. Most importantly, it cuts the costs of purchased products because it’s now feasible for buyers to request competitive bids and do comparative shopping. Many companies now use a technology called electronic data interchange to process transactions and transmit purchasing documents directly from one IS to another. Figure 15.10 “Electronic Data Interchange System and Value-Added Networks” shows an electronic data interchange system at a company that subscribes to a value-added network—a private system supplied by a third-party firm—over which it conducts a variety of transactions. 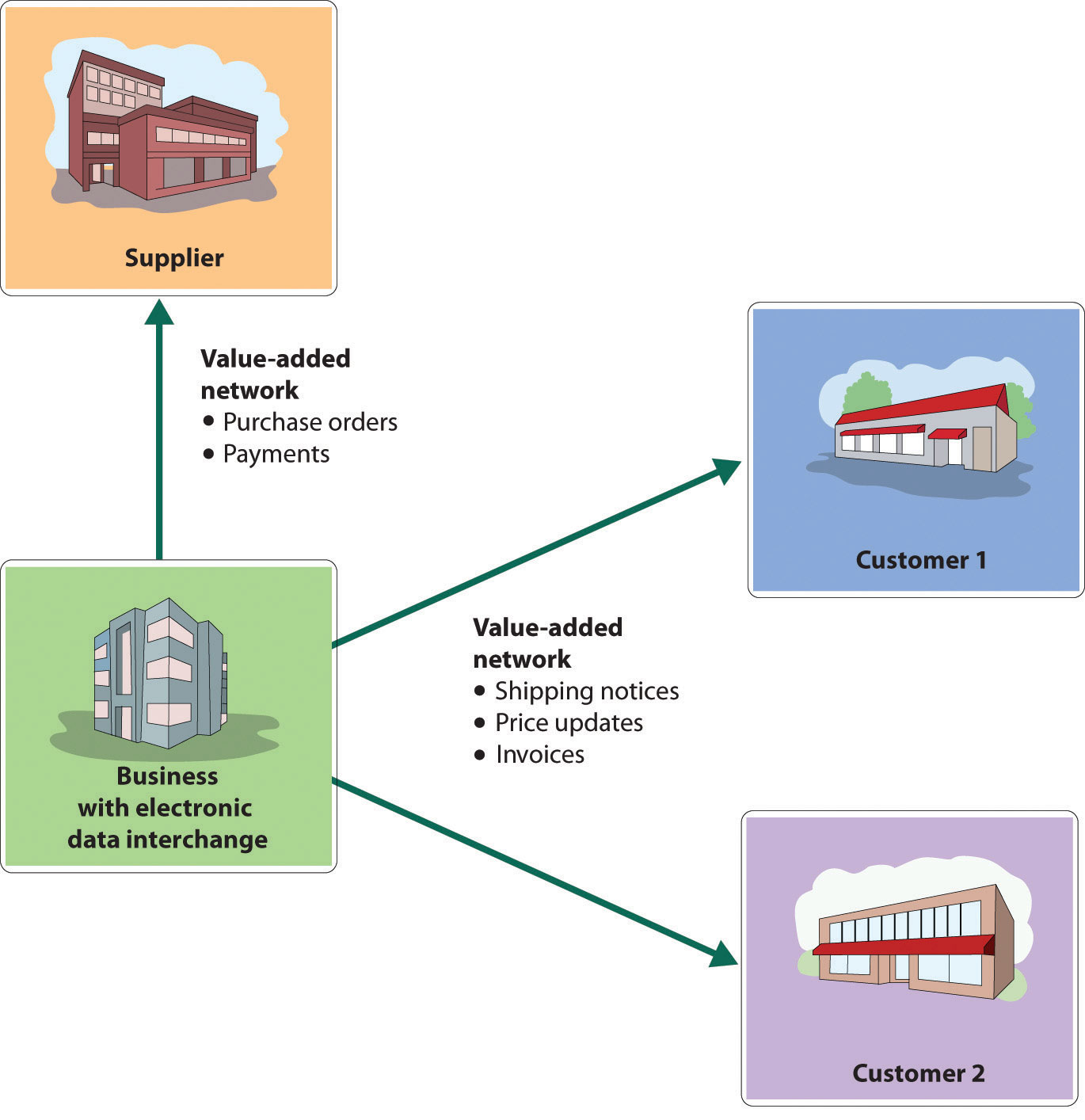 Imagine a company that retails products for schoolteachers over the Internet—for example, books, software, and teaching supplies purchased from various manufacturers and distributors. It would need facilities to store inventories and personnel to handle inventories and fill customer orders. But what if this company decided to get out of the traditional retail business? What if it decided instead to team up with three trading partners—a book publisher, a software developer, and a manufacturer of office supplies? Our original company could re-create itself as a Web site for marketing the books, software, and supplies provided by its partners, without taking physical possession of them. It would become a virtual company. Its partners would warehouse their own products and furnish product descriptions, prices, and delivery times. Meanwhile, the virtual company, besides promoting all three lines of products, would verify customer orders and forward them to its partners, who would ship their own products directly to customers. All four partners would be better off, because they’d be competing in a business in which none of them could compete by itself. This business approach has allowed Spun.com, a CD, DVD, and game Internet retailer, to avoid carrying the $8 million inventory that it would have needed to support its sales. Rather than hold its own inventory, Spun.com merely passes the orders on to Alliance Entertainment (a home entertainment products wholesale distributor), which ships them directly to customers (Research at Penn, 2011).

Cambell, A., “Over 70% of the Largest Small Businesses Have a Website”, Selling to Small Businesses, http://www.sellingtosmallbusinesses.com/70-percent-largest-small-businesses-have-website/ (accessed November 14, 2011).

Webopedia, “The Difference Between the Internet and the World Wide Web,” Webopedia, http://www.webopedia.com/DidYouKnow/Internet/2002/Web_vs_Internet.asp (accessed November 14, 2011).