A corporation (sometimes called a regular or C-corporation) differs from a sole proprietorship and a partnership because it’s a legal entity that is entirely separate from the parties who own it. It can enter into binding contracts, buy and sell property, sue and be sued, be held responsible for its actions, and be taxed. As Figure 4.5 “Types of U.S. Businesses” shows, corporations account for 18 percent of all U.S. businesses but generate almost 82 percent of the revenues (The National Data Book, 2011). Most large well-known businesses are corporations, but so are many of the smaller firms with which you do business. 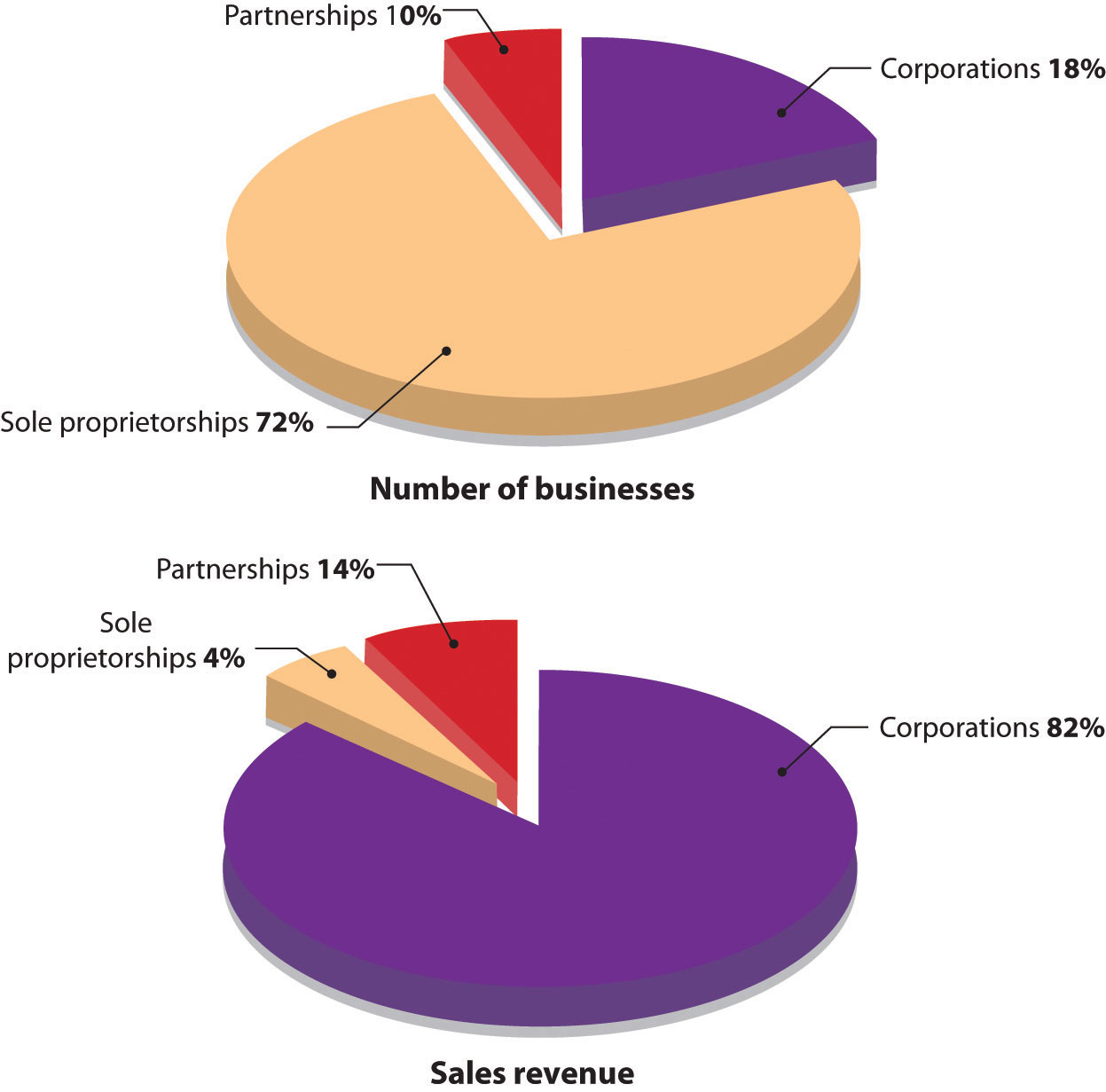 Corporations are owned by shareholders who invest money in the business by buying shares of stock. The portion of the corporation they own depends on the percentage of stock they hold. For example, if a corporation has issued 100 shares of stock, and you own 30 shares, you own 30 percent of the company. The shareholders elect a board of directors, a group of people (primarily from outside the corporation) who are legally responsible for governing the corporation. The board oversees the major policies and decisions made by the corporation, sets goals and holds management accountable for achieving them, and hires and evaluates the top executive, generally called the CEO (chief executive officer). The board also approves the distribution of income to shareholders in the form of cash payments called dividends.

The most important benefit of incorporation is the limited liability to which shareholders are exposed: they are not responsible for the obligations of the corporation, and they can lose no more than the amount that they have personally invested in the company. Clearly, limited liability would have been a big plus for the unfortunate individual whose business partner burned down their dry cleaning establishment. Had they been incorporated, the corporation would have been liable for the debts incurred by the fire. If the corporation didn’t have enough money to pay the debt, the individual shareholders would not have been obligated to pay anything. True, they would have lost all the money that they’d invested in the business, but no more.

Incorporation also makes it possible for businesses to raise funds by selling stock. This is a big advantage as a company grows and needs more funds to operate and compete. Depending on its size and financial strength, the corporation also has an advantage over other forms of business in getting bank loans. An established corporation can borrow its own funds, but when a small business needs a loan, the bank usually requires that it be guaranteed by its owners.

Because of their size and ability to pay high sales commissions and benefits, corporations are generally able to attract more skilled and talented employees than are proprietorships and partnerships.

Another advantage of incorporation is continuity. Because the corporation has a legal life separate from the lives of its owners, it can (at least in theory) exist forever. Transferring ownership of a corporation is easy: shareholders simply sell their stock to others. Some founders, however, want to restrict the transferability of their stock and so choose to operate as a privately-held corporation. The stock in these corporations is held by only a few individuals, who are not allowed to sell it to the general public. Companies with no such restrictions on stock sales are called public corporations; stock is available for sale to the general public.

Like sole proprietorships and partnerships, corporations have both positive and negative properties. In sole proprietorships and partnerships, for instance, the individuals who own and manage a business are the same people. Corporate managers, however, don’t necessarily own stock, and shareholders don’t necessarily work for the company. This situation can be troublesome if the goals of the two groups differ significantly. Managers, for example, might be more interested in career advancement than the overall profitability of the company. Stockholders might care about profits without regard for the well-being of employees.

Another drawback to incorporation—one that often discourages small businesses from incorporating—is the fact that corporations are costly to set up. When you combine filing and licensing fees with accounting and attorney fees, incorporating a business could set you back by $1,000 to $6,000 or more depending on the size and scope of your business (San Francisco Chronicle, 2011). Additionally, corporations are subject to levels of regulation and governmental oversight that can place a burden on small businesses. Finally, corporations are subject to what’s generally called “double taxation.” Corporations are taxed by the federal and state governments on their earnings. When these earnings are distributed as dividends, the shareholders pay taxes on these dividends. Corporate profits are thus taxed twice—the corporation pays the taxes the first time and the shareholders pay the taxes the second time.

Five years after starting their ice cream business, Ben Cohen and Jerry Greenfield evaluated the pros and cons of the corporate form of ownership, and the “pros” won. The primary motivator was the need to raise funds to build a $2 million manufacturing facility. Not only did Ben and Jerry decide to switch from a partnership to a corporation, but they also decided to sell shares of stock to the public (and thus become a public corporation). Their sale of stock to the public was a bit unusual: Ben and Jerry wanted the community to own the company, so instead of offering the stock to anyone interested in buying a share, they offered stock to residents of Vermont only. Ben believed that “business has a responsibility to give back to the community from which it draws its support” (Lager, 1994). He wanted the company to be owned by those who lined up in the gas station to buy cones. The stock was so popular that one in every hundred Vermont families bought stock in the company (Lager, 1994). Eventually, as the company continued to expand, the stock was sold on a national level.

SolarBike Company was formed as a partnership ten years ago by three sisters-in-law: Peg McLaughlin, Terry McLaughlin, and Joanie McLaughlin. All three worked diligently to design and produce the SolarBike: an electric bicycle propelled by the sun’s rays. The good news is that the bike is a big hit with environmentalists and last year’s sales reached $2 million. The bad news is that to keep up with growing demand for the bike, the company must expand its capacity at a cost of $1 million. Even though the company is doing well, it’s unlikely that the partnership could get the needed $1 million in funds from a bank.

The company’s predicament was discussed at a recent partnership meeting. Not only were the three partners unwilling to lend the company any more money, but also they voiced concern about being held responsible for their own actions as well as for all the partners’ actions. Peg asked the group to consider incorporating and raising funds through the sale of stock. Joanie supported this idea, but Terry was against it.

The three partners hired you as a consultant to advise them on whether to remain as a partnership or to form a private corporation. In addition to your recommendation, you should discuss the advantages and disadvantages of both forms of organization and explain how they apply to SolarBike Company’s situation.