Fuligni (2011) argued that because immigrant groups face barriers in their access to resources, family and ethnic identity is a salient protective factor in immigrant families. Family connection remains highest over time among the immigrant families facing the most stress, suggesting that families are a particularly important support for immigrants struggling in the new culture (Ibanez et al., 2015). The protection provided by family connectedness and identity may be one explanation for the immigrant paradox. In Latino/a families, the tradition of family connectedness and obligation is known as “familismo,” (Parra-Cardona et al., 2006). In a qualitative study to better understand parenting needs, Latina/o parents reported that “familismo” was a strong motivation to adopt more effective parenting practices (Parra-Cardona, Lappan, Escobar-Chew, & Whitehead, 2015). In Asian families, family cohesion stems from Confucian values (Walton & Takeuchi, 2010). Among Black Caribbean immigrants, gatherings of family and friends called “liming” sessions reinforce family and cultural identities through story telling (Brooks, 2013).

Several aspects of family connectedness described in the following sections may serve as a source of resilience for both adults and children in immigrant families: family cohesion, a sense of family obligation, and an emphasis on ethnic heritage.

Family cohesion is how emotionally close and supportive the members of a family are. An emphasis on family connection is reflected in the structure of immigrant families, which are more likely to include married couples and to be inclusive of extended family members. Immigrants in general are more likely than the United States-born to marry and less likely to divorce (Quian, 2013). According to the Census Bureau’s American Community Survey, 82% of children of immigrants live with two parents, whereas 71% of children in United States-born families are in living with two parents (Hernandez et al., 2012). This emphasis on cohesion reflected in the immediate and extended family structure could provide protective influences for both children and adults.

Immediate family. Family cohesion in immediate immigrant families is linked to positive outcomes for children and adolescents. In studies of Latino/a immigrant families, family cohesion predicts child social skills and self-efficacy and protects against conduct problems and alcohol use (Leidy, Guerra, & Toro, 2012; Marsiglia, Parsai, & Kulis, 2009). Family cohesion may also help immigrants cope with the challenges of living in a new country and culture. For example, a study by Juang and Alvarez (2010) found that Chinese American youth who experienced discrimination felt loneliness and anxiety, but family cohesion buffered this negative effect. Family cohesion was particularly powerful for youth who experienced high levels of discrimination. Similarly, among adolescent refugees from Kmer who had been exposed to significant violence, family support protected against mental health and personal risk behavior problems (Berthold, 2000). 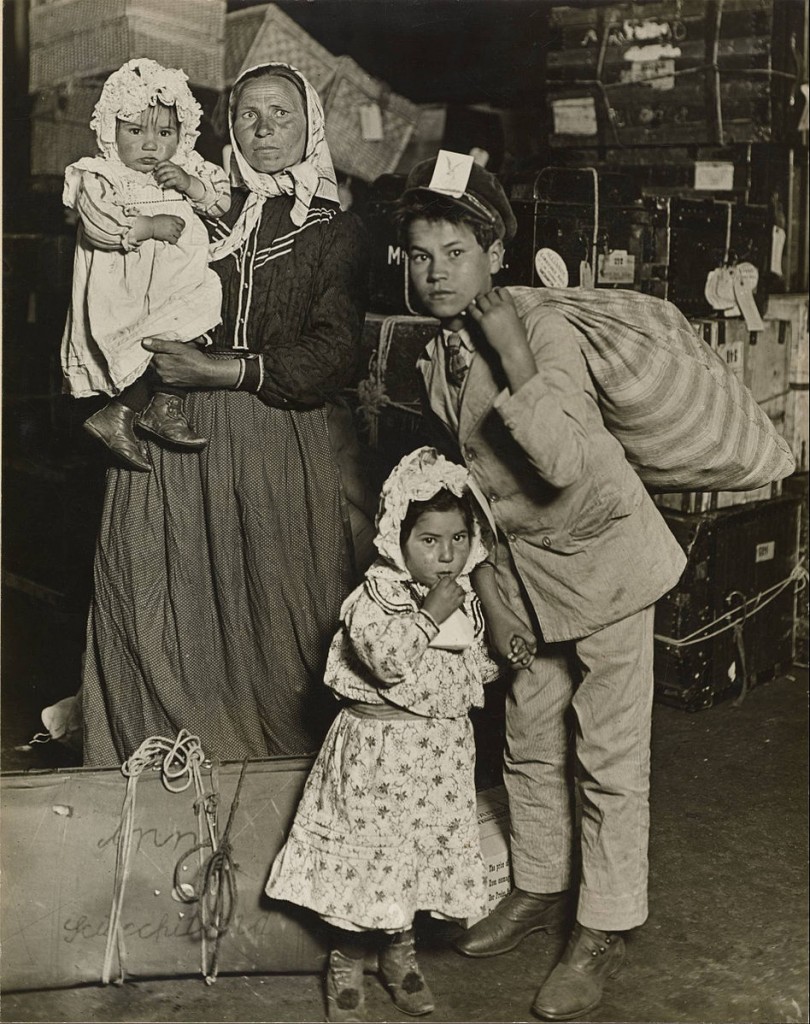 Immigrant Family in the Baggage Room of Ellis Island.

Immediate families continue to provide needed support during the transition to adulthood and, later, to parenthood. A study by Kasinitz et al., (2008) found that in comparison to their United States-born peers, young adult children of immigrants were more likely to live at home, which enabled many to attend college without burdensome debt and save for a home. In several studies, immigrant adults relied on their parents when they themselves became parents. Even if new mothers had previously been critical of their own mothers, when second generation women transitioned into parenting, they often relied heavily on their mothers for support and advice (Foner & Dreby, 2011; Ornelas et al., 2009). When their mothers remained in their home country, transnational phone calls were one important form of support (Ornelas et al., 2009).

Extended family. Another source of resilience for immigrant families is found in extended family cohesion. In several studies, extended family members were a crucial support during the transition time following migration, providing food, giving support, and helping pay bills until the recently arrived family could get established (Ayón & Naddy, 2013; DeJonckheere, Vaughn, & Jacquez, 2014; Parra-Cardona et al., 2006). For example, a Latino youth explained, “When we first came here my cousin and I told a lot of secrets, and he’s the one I trust” (p. 15). Campbell (2008) described how the undocumented women in the study depended on extended family members to help them navigate the system in order to buy a house, and how they relied on family members to look after their properties back home in Mexico. In a quantitative study of risk and resilience among immigrant Latina mothers, social capital, described as a network of family and friends, was related to life satisfaction and food security (Raffaelli, Tran, Wiley, Garlaza-Heras, & Lazarevic, 2012).

Extended family provided needed support in raising children. When immigrant new mothers were separated from their parents, they relied on other extended family members also living in the country of destination, especially in the time period immediately after giving birth (Ornelas et al., 2009). In a study of Eastern European immigrants, grandparents and other relatives played important roles in raising Unite States-born children (Nesteruk & Marks, 2009), often travelling to the United States for six months at a time to assist new parents after a child was born.

When children are older, relatives often provide child rearing support for immigrant families. Xiong and colleagues (2004) reported that Hmong families living in the United States may send their children away to live with relatives to avoid the dangers of an unsafe neighborhood. Similar examples are found outside the United States. Vietnamese refugee parents in Norway depended on kin networks to provide support and protection to troubled youth (Tingvold, Hauff, Allen, & Middelthon, 2012). In order to maintain intergenerational ties, Eastern European immigrant families described making sacrifices to move closer to kin or send their children abroad to stay with grandparents in the summer (Nesteruk & Marks, 2009). Grandparents often played a key role in raising grandchildren in immigrant families, adding instrumental support especially in dual career families (Treas & Mazumdar, 2004; Xie & Xia, 2011). Given the importance of many grandparents in immigrant families lives, Foner and colleagues (2011) suggest that intergenerational research among immigrant families with three generations in one household is needed.

Family identity implies having a sense of obligation toward kin and striving to be valued, contributing members of one’s family (Fuligni, 2011). Even after controlling for socio-economic variables, immigrant adolescents and young adults from Filipino, Mexican, Latin American, and Central/South-American backgrounds were much more likely than European youth to report a sense of family obligation in the areas of assisting family, spending time with family, considering family members’ opinions and desires, and supporting family (Fuligni, 2011). Although foreign born students had a higher level of obligation than United States-born students, second and third generation youth from Asian and Latino/a backgrounds were more likely to have a higher sense of obligation than those from European backgrounds. Ethnic differences in emotional closeness or conflict, however, were not found. Evidence suggests that these levels of obligation were connected to adolescents’ sense of ethnic identity, a topic explored later in this chapter.

Parenting practices may contribute to a sense of family obligation. Xiong et al.’s (2004) study found that Southeast Asian adolescents perceived a parental emphasis on proper behaviors and academic success. One Cambodian participant in the study reported constant messages from parents to “stay in school, stay out of trouble, don’t go out with friends all the time to do bad things, be on time [when coming back home]” (p. 9). Adolescents also reported that parents often communicated the connection between education and opportunity. These findings imply that parents’ clear communication of family values contributes to the academic resilience of immigrant children, perhaps compensating for other challenges.

Family obligation appears to contribute to the mental health of immigrant children. One study of Latino families found that familism values contributed to lower rates of externalizing behavior (German, Gonzales, & Dumka, 2009). Also, family identity and obligation has been found to contribute to positive emotional well-being and personal self-efficacy in immigrant children (Fuligni, 2011; Kuperminc, Wilkins, Jurkovic, & Perilla, 2013). Feeling like a good family member has been found to mediate a relationship between helping at home and elevated levels of happiness in youth from Latino/a, Asian, and immigrant backgrounds, although increased helping is also related to feelings of burden (Telzer & Fuligni, 2009). A sense of fairness regarding family obligations was also an important predictor of declines in psychological distress among Latino/a immigrant youth (Kuperminc et al., 2013). Most recently, engaging in family assistance has been found to be associated with ventral striatum activation in the brain, suggesting a neurological benefit associated with decreased risk taking (Telzer, Fuligni, Lieberman, & Galván, 2013). Several studies have found that lower instances of risky behaviors such as early sex, violence, delinquency, and substance abuse have been reported in adolescent immigrant youth across race and ethnicity (Hernandez et al., 2012; Kao, Lupiya, & Clemen-Stone, 2014). While family obligations may be challenging at times, immigrant youth often benefit from these obligations.

A sense of ethnic identity developed through socialization in families and cultural communities may provide protective influence. For example, a strong ethnic identity was found to contribute to academic motivation in immigrant children (Fuligni, 2011). Turney and Kao (2012) found that immigrant parents were more likely to talk with their children about their racial and ethnic traditions than United States-born parents. Religiosity and spirituality, often integrated with one’s ethnic identity, rituals, and traditions, appear to play a significant role as a protective factor in the immigrant paradox among Latino/a and Somali youth (Areba, 2015; Ruiz & Steffen, 2011). Also, participation in a religious community was a key means of connecting children of Vietnam refugees with their ethnic heritage and building cultural capital (Tingvold et al., 2012). Among refugees, contact with those of the same ethnic background may be protective. Sudanese children living without any contact with other Sudanese were more likely to have PTSD than those who had fostered with Sudanese families (Geltman et al., 2005). In one study, ties to tradition and Somali culture were adaptive for Somali girls, but assimilation to the United States host country culture was adaptive for boys (Fazel, Reed, Panter-Brick, & Stein, 2012). Ethnic heritage appears to be a protective factor for many immigrants, although it is influenced by contextual factors such as gender.