The most critical step towards economic well-being is obtaining adequate employment. Immigrants account for more than 17% of the United States work force, although they make up only 13% of the population (MPI, 2013). The unemployment rate for foreign-born persons is currently 5.6%, while it is 6.3% for native-born persons (Bureau of Labor Statistics, 2015). Although immigrants have relatively high rates of labor force participation, the opportunities and benefits that are available to them depend on the level of employment they can obtain. We will address each in turn.

Approximately 20% of immigrant workers are employed in construction, food service, and agriculture (Singer, 2012). More than half of all workers employed in private households are immigrants and immigrants also represent a third of the workers in the hospitality industry (Newbuger & Gryn, 2009). The majority of the positions in these industries are low-wage jobs. 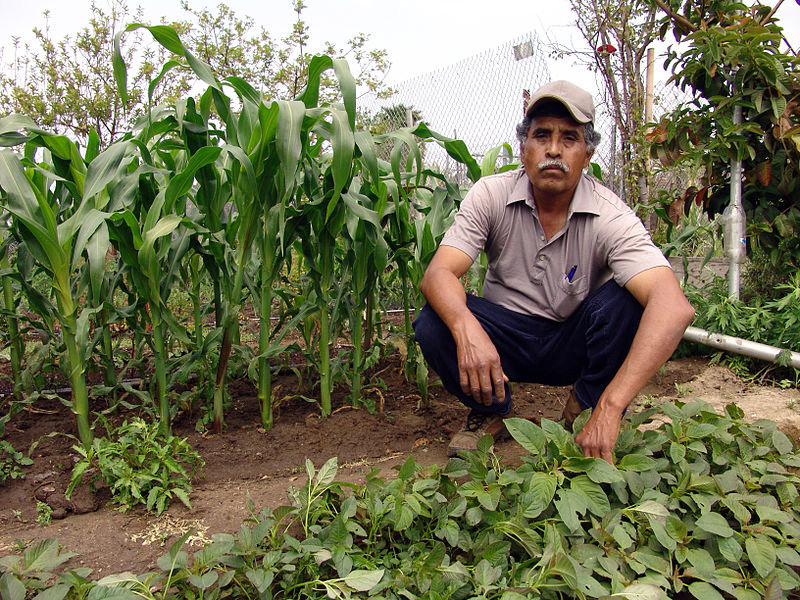 South Central Farm in Los Angeles, one of the largest urban gardens in the United States.

Middle- and high-skill labor force. More educated and skilled immigrant workers can obtain jobs that are high paying and offer job stability such as those in healthcare, high-technology manufacturing, information technology, and life sciences. Immigrant workers are keeping pace with the native-born workforce in these high skill industries (Singer, 2012). Immigrants hold bachelors and graduate degrees at similar rates to their native-born peers (30% and 11%, respectively; Singer, 2012).

Barriers to better employment. The largest barriers to higher-paying employment for immigrants are a lack of education and English-speaking ability. Approximately 29% of immigrant workers do not hold a high school diploma compared to only 7% of their native-born peers (Singer, 2012). Moreover, about 46% of immigrant workers would classify themselves as limited English proficient speakers (Capps, Fix, Passel, Ost, & Perez-Lopez, 2003). More than 62% of immigrant workers in low-wage jobs are limited English language speakers compared to only 2% of native-born workers in low-wage jobs (Capps, Fix, Passel, Ost, & Perez-Lopez, 2003). A study conducted by the Robert Wood Johnson Foundation (Garrett, 2006) found that it is extremely difficult for refugees to move from low-paying to better paying jobs after they have adjusted to living in the United States because many lack English language skills and education. It is difficult for immigrants to seek more education or training, due to the pressing need to work to provide for their families. Leaving the workforce to train may leave them financial vulnerable.

Immigrant workers who are middle-wage earners are still disadvantaged. In comparison to their native-born peers who earn a median income of $820 weekly, a full-time salary immigrant worker earns $664 weekly (Bureau of Labor Statistics, 2015). Moreover, these workers earn 12% less in hourly wage than their native-born counterparts; this wage gap is 26% in California, a state with the largest immigrant workforce (immigrants make up 37% of the workforce in California; Bohn & Schiff, 2011).

These wage disadvantages are partially due to employer discrimination. In 1996, the Illegal Immigration Reform and Immigrant Responsibility Act (IRCA) implemented additional restrictions on employment eligibility verification, including sanctions for employers who hired undocumented immigrants. Although it is illegal for an employer to discriminate based on national origin or citizenship status, many employers chose to avoid hiring individuals who appeared foreign, in order to avoid sanctions. A General Accounting Office survey found that 19% of employers (approximately 891,000 employers) admitted to discriminating against people based on language, accent, appearance, or citizenship status because of fear of violating IRCA.

Immigrant workers also face high rates of wage and workplace violations. A study looking at workplace violations in three large metropolitan cities in the United States (Chicago, Los Angeles, and New York City) found that immigrant workers were twice as likely to experience a minimum wage violation than their native-born peers (Bernhardt et al., 2008). Another study conducted by Orrenius and Zavodny (2009) also found that immigrants are more likely to be employed in dangerous industries than their native-born peers, and experience more workplace injuries and fatalities. In these injuries, limited English skills are a contributing factor. These workers may be afraid to speak for themselves with their livelihood at stake and are left at the mercy of others. Immigrant workers are in dire need of representation, but infrequently have access to it. Only 10% of the immigrant workforce is represented by unions in contrast to 14 percent the native-born workforce (Batalova, 2011).

Supports for Employment: The Unique Case of Refugees

Refugees are a unique group of immigrants in that there are support systems in place to help with resettlement upon their arrival in the United States. Government agencies and voluntary agencies (VOLAGs) provide initial supports to help families resettle in their new home, including social services, food support, cash assistance, healthcare, and employment services. Great emphasis in the refugee resettlement process is placed on finding a job so that refugees can become financially self-sufficient without the support of the government. The Office of Refugee Resettlement (ORR) provides two programs to support VOLAGs in finding employment contracts for refugees:

Problems in the VAMC program

The VAMC provides extra training and benefits for refugees, with the goal of economic self-sufficiency within the first few months of arrival. However, recent research suggests there are downsides. Funding for VOLAGs in the VAMC program in contingent upon meeting performance measures such as how many refugees entered employment and how many were self-sufficient at 120 and 180 days (Office of Refugee Resettlement, 2016).
Many of the jobs that are available quickly pay only $8.25 hourly and require over an hour in travel time. Earlier employment means less time for job training and English language classes, which are factors that would impact the long-term economic well-being of refugees.