The resounding words, “YOU ARE BETTER THAN THAT,” penned and embedded by my mother in the fiber of my being, echoed in the ear drums of my soul, brought me back to sanity. It was like the blinders were opened and the light of truth penetrated the darkness of my world. For the first time, I saw myself for who I really am and wanted to be. I was no longer ashamed of my uniqueness (Douangphouxay, 2012, p. 1).

Family often provides motivation to immigrate. In one study, Latino/a immigrants cited their desire to be reunited with families as a motivator for immigration (Campbell, 2008). Other reasons for leaving their home country have included dreams of an education and future for their children, a need to protect children from violence, and a desire to achieve financial stability in order to provide the family with basic necessities (Solheim, Rojas-García, Olson, & Zuiker, 2012). This section reviews immigrant and refugee families’ motivation to work hard and provide education for their children.

Across the literature, there is evidence that immigrant families emphasize the value of working hard to support their families. The opportunity to work hard in order to support the family has not only been cited as a reason for immigrating to the United States, but qualitative studies have also illustrated immigrants’ feelings of cultural pride in giving their best for their loved ones (Parra-Cardona, Bulock, Imiq, Villarruel, & Gold, 2006; Solheim et al., 2012). Immigrant families described enduring an anti-immigration environment in their country of destination because of economic opportunities and the possibility of upward social mobility for their loved ones (Valdez, Lewis Valentine, & Padilla, 2013). In another study of migrant workers, the demands of long hours and challenging schedules were noted, but the opportunity to work and be independent was highly valued (Parra-Cardona et al., 2006). In comparison to previous experiences in their home country, participants expressed satisfaction in having an income that was adequate for basic necessities. Imagining a better future was described as a coping strategy for immigrant participants (Parra-Cardona et al., 2008). 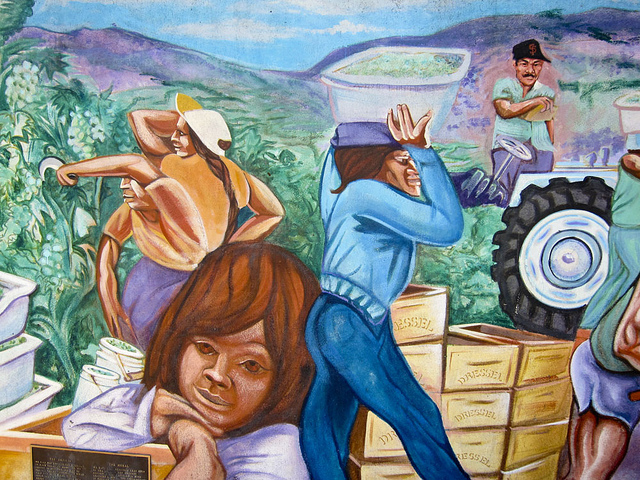 Mural to honor migrant workers at the Gundlach-Bundschu winery.

Data from the Census Bureau’s American Community Survey suggest that work patterns among immigrant fathers differ by level of language fluency. Among immigrant fathers in English fluent families, 95% to 96% worked to support their families, a level comparable to United States-born families (Hernandez et al., 2012). Among those who were English language learners, more than 85% of fathers worked to support their families. Exceptions were found in Southeast Asian, Armenian, and Iraqi refugee families where rates were between 70-84%. This may be because refugee families from these conflict-ridden parts of the world are likely to have suffered more traumatic events and therefore may experience greater functioning and work-related barriers (See also Chapter 5).

Hernandez et al., (2012) found that the majority of immigrant families in their study also had a mother who contributed to the family finances. Campbell (2008) illustrated the pride that immigrant women took in their jobs, even if they were low paying. Several women demonstrated an entrepreneurial spirit, running businesses based on traditional roles of women (baking, sewing, etc.). The motivations for these efforts were often framed as dedication to the welfare of their families, and obstacles were seen as challenges to be overcome rather than insurmountable barriers. In another qualitative study, one woman shared her pride in balancing work and family as she obtained her GED, found a new job, built a new home with her spouse, and supported her children’s education (Parra-Cardona et al., 2006). Women also supported their spouses and took pride in their work ethic and sacrifices. One woman in Parra-Cardona et al.’s (2006) study noted that she was proud of her husband for getting a promotion in a factory for $9/hour; she was proud that his 70 hour work weeks and sacrifices over the years were recognized (Parra-Cardona et al., 2006).

Children are a source of inspiration as immigrants work hard to face challenges and adversity (Ayón & Naddy, 2013; Valdez et al., 2013; Walsh, 2006). Qualitative research emphasized that well-being of children was a priority among immigrant workers, and being a good parent was their “central life commitment,” even a sacred responsibility (Parra-Cardona et al., 2008). These sentiments were illustrated when immigrant parents expressed desire to cover basic needs of their families without spending excessive time away from family. In another study, Southeast Asian adolescents, the majority of whom were children of immigrants, recognized that their parents shared affection by trying to provide for them (Xiong, Detzner, & Cleveland, 2004). They saw that their parents wanted them to do better than they had, sharing that their parents’ low paying jobs served as motivation to do better.

Paul Orieny, Sr. Clinical Advisor for Mental Health, The Center for Victims of Torture (CVT), discusses the education and employment success of immigrants.

Research has also emphasized how much immigrant parents value education for their children. In a qualitative study of Mexican American undocumented women in South Carolina, mothers were unanimous in their desire for children’s educational success (Campbell, 2008). As parents, they had given up life in Mexico for the sake of their children’s education. Many of these mothers invested in their own education to become better parents and to model the importance of education for their children (Campbell, 2008). In a longitudinal study, immigrant children of diverse backgrounds were found to have higher GPAs on average if their parents had listed education as reason for immigrating, which suggests that parents’ motivations may have an impact on their children (Hagelskamp, Suarez-Orozco, & Hughes, 2010). Planning for children’s education was found to be a source of life satisfaction for immigrant migrant parents (Parra-Cardona et al., 2006).

In spite of early disadvantages, first-generation immigrant adolescents appear to have an advantage over second-generation or third-generation children of immigrants, an often cited example of the immigrant paradox. Using data from the Educational Longitudinal Study, Pong and Zeiser (2012) found first-generation immigrant students in 10th grade had higher GPAs and more positive attitudes toward school than subsequent generations. These tendencies held true across race/ethnicity including White, Latino/a1, Black, and Asian immigrant children. Family influences may help account for these results as evidence connects immigrant and refugee parents’ aspirations to children’s academic outcomes. For example, Pong and Zeiser (2012) also found that parents’ expectations were related to 10th grade math results. For Hmong men, having greater family conflict is linked to being more likely to complete the first year of college. In families like these, family conflict may reflect the parents’ investment in their child’s academic lives (Lee, Jung, Su, Tran, & Bahrassa, 2009). Portes and Fernandez-Kelly (2008) discussed the strict parenting practices in immigrant families that are often at odds with the parenting styles of the majority population. They concluded, “While such rearing practices will be surely frowned upon by many educational psychologists, they have the effect of protecting children from the perils of street life in their immediate surroundings and of keeping them in touch with their cultural roots” (p. 8).

Value of a Second Language

Although the challenge of learning English is great, studies have found that the ability to speak a second language represents advantages for many children in immigrant families. Children in families who promote learning in two languages benefit in academic achievements, cognitive gains, self-esteem, and family cohesion (Espinosa, 2008; Han, 2012). However, the importance of mastering English must be stressed. In a sample of Latino/a and Asian children, Han (2012) found that bilingual children dominant in the English language performed at an academic level similar to White monolingual children, controlling for other factors, while bilingual children who were not dominant in English or did not speak two languages performed at lower levels. In addition, first and second generation bilingual children performed better than third generation bilingual students providing further evidence for an immigrant paradox. Although it can be a stressful obligation, children of immigrants often express pride in their bi-lingual abilities and in being able to translate for their parents (Kasinitz, Mollenkopf, Waters, & Holdaway, 2008). In addition, speaking one’s native language allows children in immigrant and refugee families to connect with extended family members and ties them to their ethnic heritage (Costigan & Koryzma, 2011; Nesteruk & Marks, 2009). Espinosa (2008) advocated promoting rich language experiences in one’s native language during the first three years of life and then adding second language after the age of 3.

1The term Latino/a is used throughout this chapter, though some original studies used the term Hispanic.