Support from family, friends, and formal social systems can promote coping after IPV (Coker et al., 2002). Immigrant/refugee women are not likely to seek formal assistance (such as from police or shelters; Ingram, 2007), and are more likely to seek assistance from family and friends (Brabeck & Guzman, 2008). Family and friends provide invaluable support to women who have experienced IPV, including emotional support, information about the system, and suggestions for getting help (Kyriakakis, 2014).

Why don’t they just leave?

Many people wonder why a survivor would choose to stay in a relationship with someone who hurts them. While some partners will choose to end a violent relationship, many will not. Their reasons could vary from ongoing love to pragmatic need to desperate fear, or even a combination of the above.
We describe many reasons why an immigrant/refugee surbibor would not leave the relationship or even seek outside help in coping with the relation:

“For me also, my husband says if I dare put him in jail, when he gets out, he kills me. Then, I ask him to get divorced. He says before getting divorced plan to buy a coffin beforehand. He just says like that.” Khmer Immigrant, quoted in Bhuyan et al., p 912.

Survivors of all backgrounds face substantial barriers to seeking assistance, such as fear of the abuser and retaliation (Bhuyan et al., 2005). Immigrant/refugee survivors, however, face additional social, economic, and legal barriers to seeking informal and formal help for IPV. These challenges include country-of–origin norms, family taboos, distance from or unavailability of supports, fear of deportation or loss of custody, and a lack of culturally competent and language appropriate services.

Norms from native countries may impact survivors’ willingness to seek help. In many countries, survivors and their families avoid outside intervention because it might bring shame or dishonor to the family or community (Dasgupta & Jain, 2007; Yoshihama, 2009). Latina and South Asian immigrants/refugees avoid seeking help due to the shame and stigmatization of divorce (Bauer, Rodriguez, Quiroga, & Flores-Ortiz, 2000), and because honorable marriage is one of few ways to maintain others’ respect (Fuchsel et al., 2012). For Vietnamese immigrants/refugees, traditional values, gender roles, and concern about discrimination decrease help seeking (Bui & Morash, 1999).

There may also be norms within the family that prevent help-seeking. Survivors sometimes do not seek help from parents because they do not want family to view their husband in a negative light. Also, they fear that their parents will be distressed and/ or feel shame about the violence (Bhuyan et al., 2005). Women report a taboo against sharing family problems with people outside the family. Also, they worry about gossip within the local immigrant community (Bhuyan et al., 2005; Kyriakakis, 2014).

Distance from or Unawareness of Supports

Families who are nearby can provide more support than families separated by great distances. For example, women living in Mexico often turn to their parents for tangible support such as safe refuge after violence (Kyriakakis, 2014). When these women immigrate to the United States, support from parents in Mexico is primarily emotional (Kyriakakis, 2014). Distance from family can also lead immigrants/refugees to be dependent on an abusive partner for emotional and social support, particularly when English language skills are lacking (Bhuyan et al., 2005; Denham et al., 2007).

Immigrants and refugees may be unaware of local services, such as social and legal service agencies (Bhuyan et al., 2005; Erez et al., 2009; Moya, Chavez-Baray, Martinez, 2014). Further, they might question access to or availability of social services based on prior experiences in their countries-of-origin. For example, in some countries, such as Mexico, the majority of the population do not have access to public social services, and Asian and Latina immigrants often do not believe that anyone is available to help them (Bauer et al., 2000; Bui, 2003; Esteinou, 2007). Even if they have knowledge of these services and how they work, linguistic and cultural barriers can deter seeking help or limit successful navigation of these resources (Bhuyan et al., 2005, Erez et al., 2009).

“In Cambodia, if the husband and wife fight we suffer the pain and only the parents can help resolve to get us back together. We live in America, there are centers to assist us. In Cambodia, there are no such centers to help us.”
-Khmer Immigrant
Quote taken from Bhuyan et al., p. 913

Language barriers pose a critical problem for community-based organizations and for systems like the police, to communicate with the survivors and their families and to help them effectively (Yingling, et al., 2015; Robert Wood Johnson Foundation, 2009). Further, services, particularly culturally competent services, are not always available to immigrant/refugee women (Morash & Bui, 2008). Community-based organizations and mainstream service providers such as the police need to be trained to understand the complexities of survivors’ lives and to assess common as well as the unique features of IPV experienced by immigrant/refugee women (Messing, Amanor-Boadu, Cavanaugh, Glass, & Campbell, 2013). Also, services providers for immigrant/refugee women must develop awareness about the socio-economic, cultural, and political contexts that these groups of women come from and use that information to develop programs and policies specific to them. 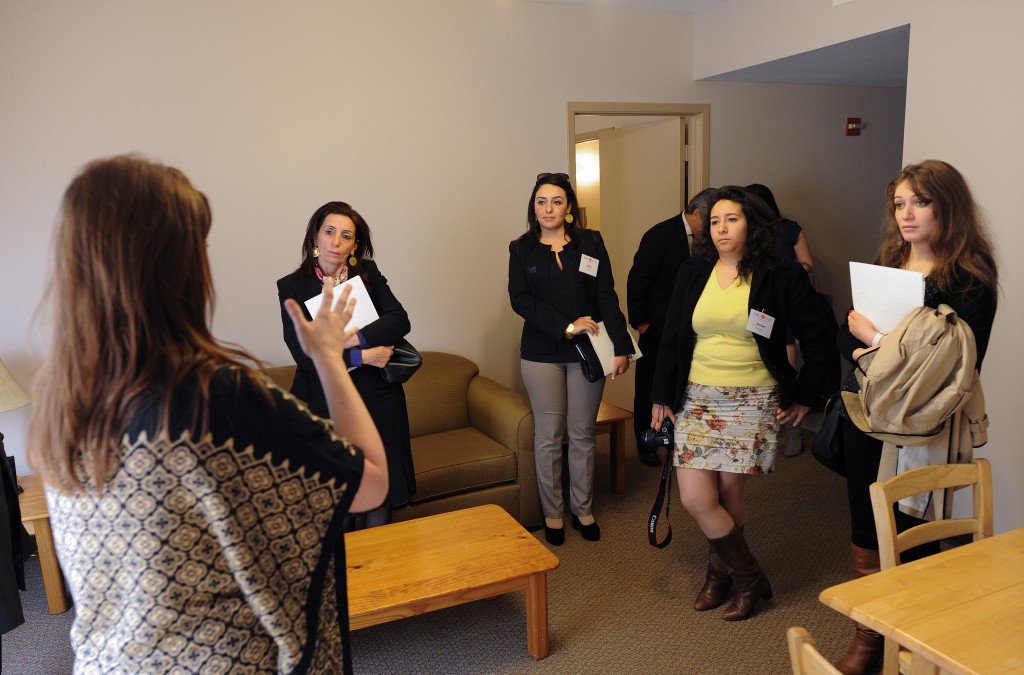 Fellows tour the Genesis Women’s Shelter in Dallas, TX before meeting with a panel of local stakeholders.

True Thao, MSW, LICSW discusses the importance of rapport and relationship building when working with immigrant and refugee clients (3:48-8:02).

Fear of Deportation or Loss of Custody

Undocumented immigrants are often afraid to report crimes to the police, including IPV, for fear of deportation or loss of custody (Adams & Campbell, 2012; Akinsulure-Smith et al., 2013). Such fears have likely escalated since the creation of “Secure Communities,” a government program which cross-checks police-recorded fingerprints to identify documentation status. If an undocumented immigrant is processed for a crime, including minor misdemeanors, it can be a first step towards deportation (Vishnuvajjala, 2012). Although many immigrants express fear of deportation if they report IPV, some research studies show that immigrant/refugee women are more likely to report IPV, particularly if they are on a spousal dependent visa and if their abusive partner threatens immigrant action (Raj, Silverman, & McCleary-Sills, 2005).

In some cases, the process of immigration leaves the immigrant spouse/partner dependent on their abusive partner. For example, when someone immigrates with an H1-B visa (targeting highly skilled professionals), their spouses are eligible for an H-4 visa. However, these spouses are not authorized to work, and they cannot file their own application for legal permanent residence status; the H1-B visa holder can choose whether or not to file for residence for his family (Balgamwalla, 2014). This leaves the spouse completely dependent on their partner for documentation for residency and for all economic benefits. Abusive partners can threaten immigration action to maintain control of a partner, by destroying immigration papers, not filing paperwork, or threatening to inform Immigration and Customs Enforcement (ICE; Balgamwalla, 2014; Erez et al., 2009).

Reporting IPV can also have implications for child custody. Undocumented immigrants can lose custody of their children if claims are brought against them. Also, if a parent accuses their spouse of IPV, the parent can be convicted for failing to protect their children from being exposed to IPV. In select cases, this can lead to deportation and reassignment of custody (Rogerson, 2012).

There are some legal resources for undocumented survivors of IPV. The Violence Against Women Act (VAWA) provides protections for survivors of IPV. If a non-citizen is married to a United States permanent resident, they can apply for a “U visa.” These visas give survivors of IPV temporary legal status and the ability to work. However, these are limited to 10,000 per year (Modi, Palmer, & Armstrong, 2014), and often fall short of meeting the needs of the total number of qualified partners (Levine & Peffer, 2012).

Immigrants/refugees who are unemployment depend on their partner to provide for themselves and their children, and may avoid any reporting that could jeopardize the relationship (Bui & Morash, 2007). In some cases, gender norms may discourage pursuing education or employment, which facilitates dependency (Bhuyan et al., 2005). The majority of immigrant/refugee survivors have limited economic resources (Erez et al., 2009; Morash et al., 2007). When immigrant/refugee women have access to employment, it can lead to an increase in couple conflict due to extra responsibilities placed on both the partners, but it can also empower immigrant/refugee women to demand better treatment (Grzywacz, Rao, Gentry, Marin, & Arcury, 2009).

Even when IPV is present, most relationships also have positive components. Survivors often hope to remain in the relationship because of these components. For immigrants/refugees, the pull to stay with a violent partner may be even stronger. Two IPV advocates stated: “a battered immigrant woman who is in an intimidating and unfamiliar culture may find comfort and continuity with an abuser” (Sullivan & Orloff, 2013). Relationships are ties that bind, and partners cannot overlook their long history together, often beginning before immigration (Sullivan, Senturia, Negash, Shiu-Thornton, & Giday, 2005).

Throughout the experience of IPV, survivors must weigh the benefits and costs of remaining the relationship. They make changes to alleviate current pain and to prevent future incidents. Perpetrators make similar choices and changes. Some perpetrators are able to make choices that reduce or stop violence altogether. In order to have a stable family relationship, both partners must make decisions that protect the physical, emotional, financial and social health of all members.

Witnessing IPV is a harrowing experience for children. Children who witness IPV are more likely to experience mental health problems such as anxiety, depression, and PTSD, as well as internalizing and externalizing problems (Kitzmann et al., 2003; Wolfe et al., 2003). While very little research has assessed the experience of IPV or family violence (violence against the child themselves or witnessing violence towards another family member) among immigrant/refugee children specifically, we do know that they are heightened risk of witnessing IPV. Many refugees are at risk for IPV and family violence due to their experiences of conflict and violence in their countries-of-origin (Haj-Yahia & Abdo-Kaloti, 2003; Catani, Schauer, & Neuner, 2008).

There are several key people who are missing or hard to find in this chapter. Can you find them?

Where are the men?
You can see that in all of the research we talk about, the survivor is a woman. We know that women are also perpetrators of IPV, and that men are also survivors of IPV (CDC, 2003). However, the vast majority of all research on survivors has studied women exclusively. This focus has likely arisen because women are more commonly injured by IPV (Whitaker, Haileyesus, Swahn, & Saltzman, 2007). It is nonetheless important to hear the stories of all people, regardless of gender.

Where are the children?
You might have noticed that in the introduction, we mentioned that children experience very negative effects from seeing IPV. But this section and the “Impact on Children” sections are the only time we mention them. Why? Once again, very little research has looked at the experience of IPV among immigrant/refugee children.

IPV is an issue that affects every member of the family – perpetrator, victim, and children. As you read the chapter, try to consider what the perspectives might be of the perpetrator and children in each story.