Opportunities and Barriers for Immigrant Families

The United States gives priority to family reunification, and has made great efforts to make the process of reunification accessible to immigrants. This provides new opportunities and security for immigrant families. However, there are still substantial challenges and barriers to families. In the sections below, we will describe the opportunities and barriers available to families in different configurations, including families seeking reunification, families living together in the United States without documentation, and couples in international marriages.

As we outlined in the policy section, United States policy prioritizes family reunification, and immigrant and refugees’ spouses and children are eligible to immigrate without visa quotas. The majority of current immigrants are family members being reunited with United States citizens or permanent residents. 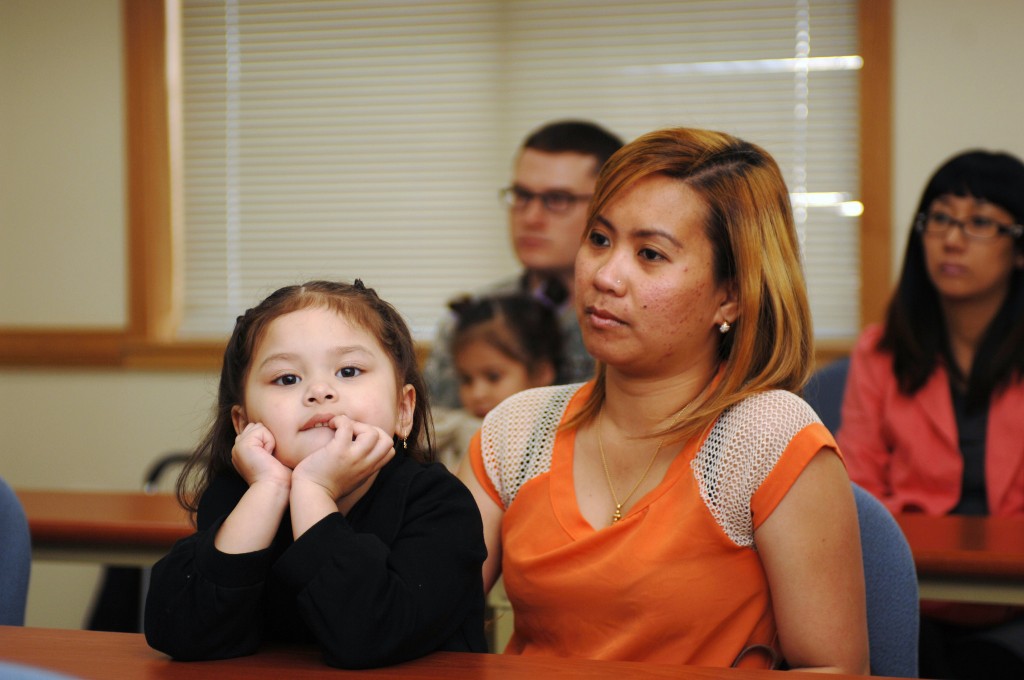 USCIS providing answers about citizenship and immigration for soldiers and families at Army Community Services in Seoul.

In addition to these policies that promote family reunification, there are now more accepting policies to support reunification of gay citizens and their immigrant spouses. Historically, United States immigration policy has denied immigration to same-sex orientation applicants. Under the 1917 Immigration Act, homosexuality was grounds for exclusion from immigration. In 1965, Congress argued that gay immigrants were included in a ban on “sexual deviation” (Dunton, 2012). The ban against gay immigrants continued until 1990, when the Immigration and National Act was amended, removing the homosexual exclusion. Moreover, asylum has been granted for persecution due to sexual orientation (Dunton, 2012). Until 2013, immigrants and refugees could apply for residency or visas for their opposite-sex spouses. There was no provision made for same-sex partners. Following the overturn of the Defense of Marriage Act (DOMA), citizens and permanent residents can now sponsor their same-sex spouses for visas. United States citizens can also sponsor a same-sex fiancé for a visa (USCIS, 2014).

Despite these advances, there are two large challenges faced by immigrants seeking reunification. First, it requires substantial time and resources, including legal counsel, to navigate the visa system. Adults can petition for permanent resident visas for themselves and their minor children, but processing such applications can take years. Currently, children of permanent residents can face seven-year wait times to be accepted as legal immigrants (Meissner, Meyers, Papademetriou & Fix, 2006).

In some cases, children can age out of eligibility by the time the application is processed and the visa is granted. Such children then go to the end of the waiting list for adult visa processing (Brown, 2014). The 2002 Child Status Protection Act is designed to protect children against aging out of visa eligibility when the child is the primary applicant for a visa, but the act does not state if it applies if a parent was applying on behalf of their family (Brown, 2014). In the 2014 ruling to Cuellar de Osorio v. Mayorkas, the Supreme Court found that the child status protection act does not apply for children when a parent is applying on behalf of their family. Such young adults have already generally been separated from family for many years, and will now be separated for years or decades more.

For families who do not have a sponsoring family member, have a sponsoring employer, or originate from a country with few immigrants, the options for legal immigration to the United States are very limited. Those families who choose to travel to the United States face substantial barriers, including a perilous trip across the border, few resources, and constant threat of deportation.

One of the most dangerous times for undocumented families is the risky trip across the border. In order to avoid border patrol, undocumented immigrants take very dangerous routes across the United States border. The vast majority of all apprehensions of undocumented immigrants are on the border (while the remainder is apprehended through interior enforcement). For example, in 2014 ICE conducted 315,943 removals, 67% of which were apprehended at the border (nearly always by the Border Patrol), and 33% of which were apprehended in the interior (ICE, 2019). The trip and efforts to avoid Border Patrol can be physically dangerous and in some cases, deadly. The acronym ICE symbolizes the fear that immigrants feel about capture and deportation. A deportee in Exile Nation: The Plastic People (2014), a documentary that follows United States deportees in Tijuana, Mexico, stated that ICE was chosen as the acronym for the Immigration and Customs Enforcement agency because it “freezes the blood of the most vulnerable.” The Trump administration instituted a policy of separating families apprehended at the border and of criminal prosecution for all apprehended crossing the border illegally, including those applying for asylum. More than 2,600 children were separated from their caregivers under this policy, which was later overturned.

Even after arrival at the interior of the United States, undocumented immigrants feel stress and anxiety relating to the fear of deportation by ICE (Chavez et al., 2012). This impacts their daily life activities. Undocumented parents sometimes fear interacting with school, health care systems, and police, for fear of revealing their own undocumented status (Chavez et al., 2012; Menjivar, 2012). They may also avoid driving, as they are not eligible for a driver’s license.

Since 2014, the Department of Homeland Security has placed a new emphasis on deporting undocumented immigrants. Department efforts generally prioritize apprehending convicted criminals and threats to public safety, but recent operations have taken a broader approach. In the opening weeks of 2016, ICE coordinated a nationwide operation to apprehend and deport undocumented adults who entered the country with their children, taking 121 people into custody in a single weekend. The majority of these individuals were families who applied for asylum, but whose cases were denied. Similar enforcement operations are planned (DHS press office, 2016). In many cases, the parents’ largest concern is that immigration enforcement will break up the family. Over 5,000 children have been turned over to the foster care system when parents were deported or detained. This can occur in three ways:

“One of my greatest fears right now is for anybody to take me away from my baby, and that I cannot provide for my baby. Growing up as a child without a father [as I did], it’s very painful… I felt like there was no male to protect them.” – Mexican Immigrant describing how his fear of deportation grew after his baby daughter was born (Enriquez, 2015, p. 944)

Although the perilous trip and threat of deportation are significant challenges for undocumented immigrant families, there are two recent policy changes that offer new opportunities and protections for undocumented families. First, some states have sought to expand the educational supports available to undocumented immigrants. The State of Minnesota, for example, enacted the “Dream Act” into law (2013). This unique act, which is also known as the “Minnesota Prosperity Act,” makes undocumented students eligible for State financial aid (State of Minnesota, 2014; Chapter 99, Article 4, Section 1). 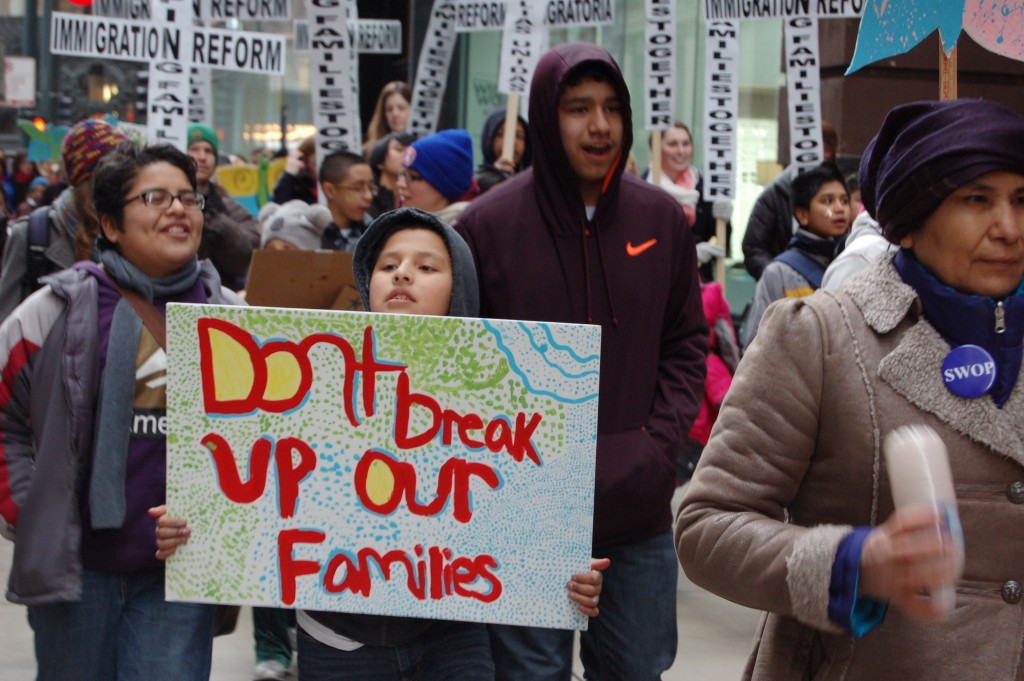 Second, there are now greater protections for unaccompanied children. In some cases, children travel across the border alone, without their families. They may be travelling to join parents already in the United States, or their parents may send them ahead to try to obtain greater opportunities for them. As a result of human rights activism, unaccompanied and separated immigrant children are now placed in a child welfare framework by licensed facilities under the care of the Office of Refugee Replacement (Somers, 2011). They provide for education, health care, and psychological support until they can be released to family or a community (Somers, 2011). Each year, 8,000 unaccompanied immigrant children receive care from the ORR (Somers, 2011).

Some members of the family may have documentation, while the others do not. There may be cases where a United States citizen has applied for a visa for his family members, but they live without documentation while they wait for their priority date. Alternatively, there may be children who are born in the United States to undocumented parents. These children are entitled to benefits that their undocumented parents are not, such as welfare benefits (Peterson Institute for International Economics, 2005).

Children are subject to “multigenerational punishment,” where they are disadvantaged because of their parents’ undocumented status (Enriquez, 2015). As in undocumented families, parents fear interacting with school, health care, or police (Chavez et al., 2012; Menjivar, 2012).These children have limited opportunities to travel domestically (due to risks of driving without a license) or internationally (due to lack of travel papers) (Enriquez, 2015). When parents’ employment opportunities are limited due to their lack of documentation, the children share in the economic instability (Enriquez, 2015).

“I’m still [supposed to be] perceived as this male provider… [but] we lost our place [after my job found out about my status], and now I’m [living] with my in-laws, and it’s hard to find a great-paying job… It makes you feel like [people are saying]. ‘How dare you do that to a little child.’ It’s hard because you do feel guilty, you feel that you’re punishing someone that shouldn’t be punished.” –Mexican immigrant (Enriquez, 2015, p. 949) 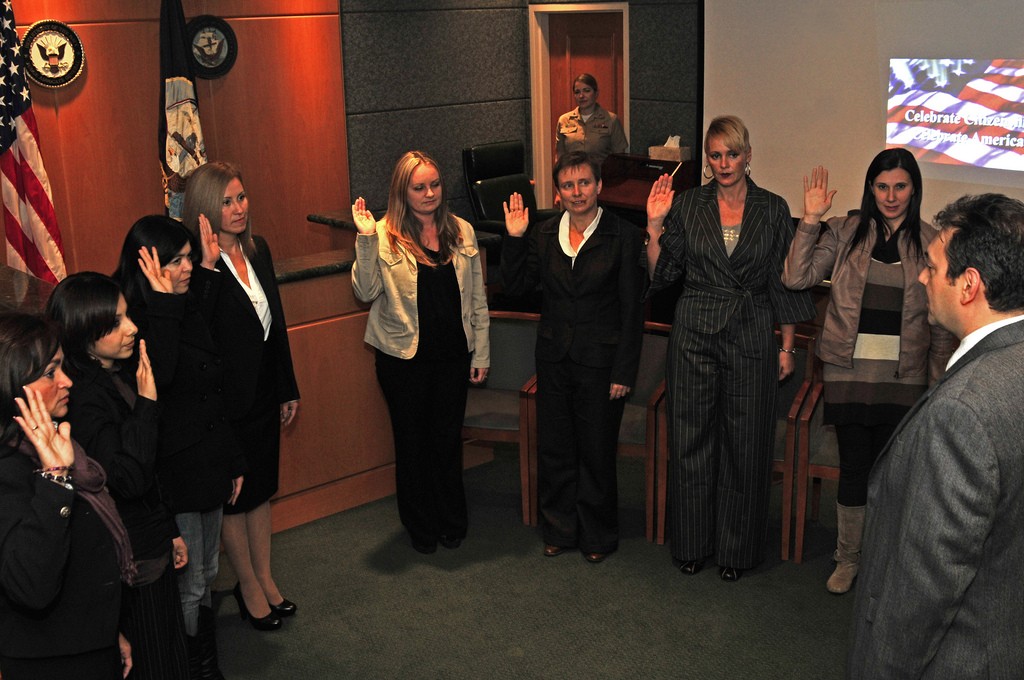 In our increasingly global world, more couples are meeting and courting across national borders. Many of these couples ultimately seek to live together in the same country. In some cases, an immigrant travels to the United States and obtains citizenship, but still hopes to marry someone from their home country and culture. Under current United States policy, there are visas available for fiancés to immigrate to the United States. However, these relationships are screened. There are strict requirements to prove that the marriage is “bonafide.” If a marriage is considered “fraudulent,” the immigrant spouse can be detained and the native spouse can be fined. There are also limits to how many fiancé visas can be filed within a certain time frame, so that the same person cannot repeatedly apply for a fiancé visa with different partners (USCIS, 2005).

Regulations are in place to protect the non-citizen fiancés. In some cases, the United States citizen has much greater power than the non-citizen fiancé, and may exploit their lack of knowledge of English, local customs, and culture. The United States Government is required to give non-citizen fiancés information about their rights and resources, in an effort to prevent or intervene in cases of intimate partner violence (USCIS, 2005). A citizen can use an international marriage broker (IMB) to connect with a partner from their home country or another desired country. The International Marriage Broker Regulation Act of 2005 (IMBRA) states that the government must conduct criminal background checks on prospective citizen clients, in order to protect the welfare of the fiancés who will enter the United States (USCIS, 2005).