The Universal Declaration of Human Rights

In response to the gross human rights violations following the Second World War, the UDHR was chartered by the United Nations in an attempt to prevent such atrocities from being committed again. The UDHR’s preamble states unequivocally “recognition of the inherent dignity and of the equal and inalienable rights of all members of the human family is the foundation of freedom, justice and peace in the world” (OHCHR; Office of the High Commissioner for Human Rights, 1948). Following the preamble are 30 Articles, which lay out in detail the specific rights to which all human beings should be entitled. According to the UNHCR, there are 389 different translations of this document. 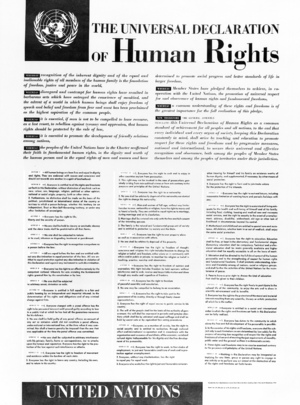 The UDHR encompasses both negative (i.e., the right to not be tortured, imprisoned without cause, or enslaved) as well as positive (i.e., the right to own property, the right to freedom of thought, and the right to marry) rights. It also enumerates, for the first time, the core principles of human rights, which are: universality, interdependence and indivisibility, equality and non-discrimination. The UDHR states further that human rights are not merely an entitlement, they also include rights and obligations. In other words, having a right brings with it a particular obligation as well. If we are to enjoy our rights as humans, then we need to respect these same rights for others. These concepts have been reiterated in many subsequent international human rights treaties, declarations, and conventions. This document (UDHR), along with the International Covenant on Civil and Political Rights (ICCPR) and the International Covenant on Economic, Social, and Cultural Rights (ICESCR), are considered to be the foundational pillars of international human rights law and the legal basis for all subsequent human right norms, standards, and rules.