5 different diseases can cause the development of vesicles in swine: Foot and Mouth Disease (FMD), Senecavirus A (also called Seneca Valley Virus), Swine Vesicular Disease, Vesicular Exanthema, and Vesicular stomatitis. Although FMD does not cause extreme mortality in swine, the consequences of an outbreak in the US would be disastrous.

FMD was eradicated from US herds in 1929. Raising pigs indemn of the disease allows us to restrict the import of meat from affected countries and to have trade agreements with many other countries. If an outbreak were to occur, losses for the livestock industry are estimated in the billions of dollars/year range. Economic losses would be due to the production losses in depopulated premises, disease eradication costs mainly enforcement of quarantine, testing, and compensation of producers but also due to trade losses. One of the challenges in dealing with FMD is that the disease is highly contagious and spreads extremely quickly, making its containment difficult.

Why are vesicular diseases concerning in swine?

The viruses that causes FMD and Senecavirus A are both members of the Picornavirus family.

Transmission occurs via direct or indirect contact with infected animals as well as through aerosol transmission. The virus has been demonstrated to travel over 30 miles in proper weather condition, resulting in epidemics in areas that were previously thought to be clean of FMD. Other species can also be carriers as the virus infects all cloven-hoofed animals but the disease is not as prominent in those animals. Pigs are considered “amplifier species” as they shed the virus at much higher rates than other susceptible species. However, they need to be exposed to a larger dose in order to contract the disease. Respiratory fluids are the main concern, but any excretion can carry the virus. The FMD virus can persist in the pharyngeal region of ruminants for months or even years, but pigs can not be carriers past 28 days. When entering a new pig, the virus first enters via the mucosa of the upper respiratory tract, then macrophages carry the disease to secondary infection sites.

This virus is still fairly new and a lot of research is underway. Oro-nasal transmission is the most common route for the disease to spread since the vesicles contain a high concentration of viruses. Shedding in the semen has been shown for boars, making mating a plausible route of transmission.

Clinical presentation is identical for FMD and for Senecavirus A. Clinical signs typically appear 1 to 5 days after exposure to the virus. Vesicles appear near the coronary band of the feet, on the snout and in the mouth, hence the name of the disease. Once symptoms begin the disease onset is quick and severe. Vesicles are difficult to see in the first day of the disease but they rupture in less than 2 days, leaving the eroded skin exposed. They start to heal around a week post-infection.Dog-sitting, lameness, fever and reluctance to eat are also commonly seen. Most weaned pigs survive when exposed to the disease. However, both FMD and Senecavirus A can cause mortality in suckling piglets due to unthriftiness.

The vesicles mentioned near the feet and mouth are the main macroscopic lesions. In some cases vesicles can also be seen in the mouth where they will appear near the back of the tongue. In young pigs, myocarditis is often the source of sudden death. 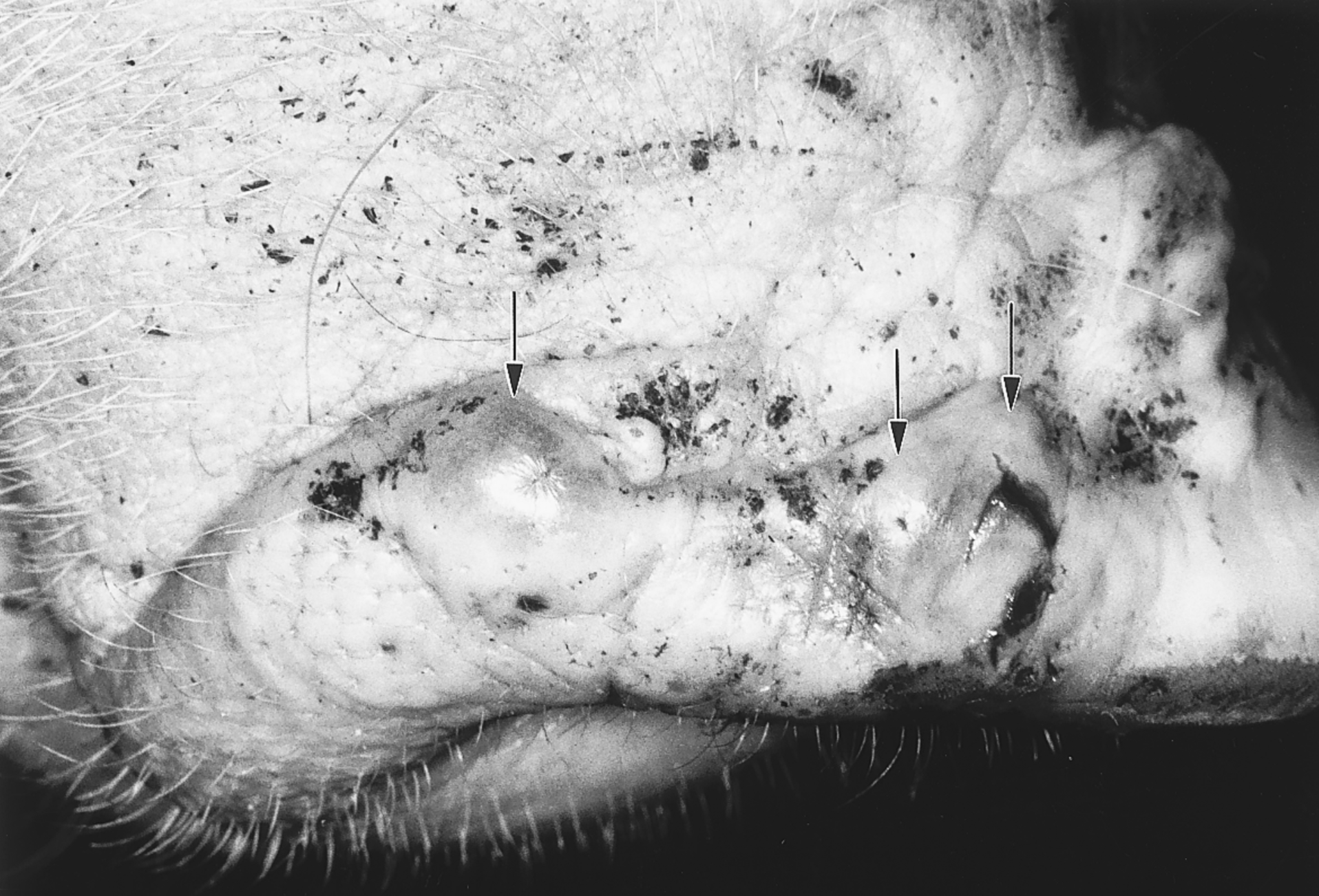 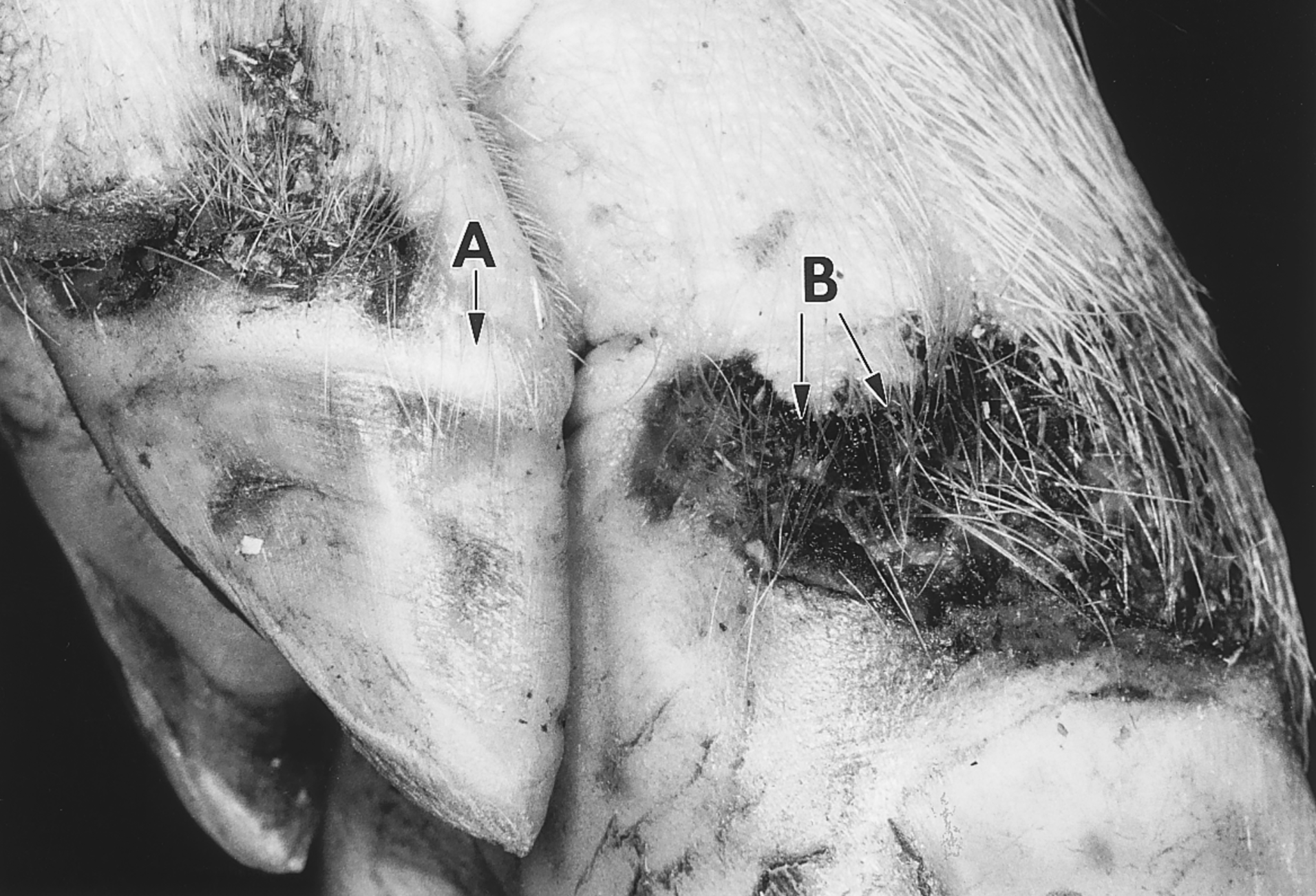 Degeneration of the epithelium is the most common microscopic lesion. Edema of the dermis is also seen early in the disease, but these lesions quickly develop into more easily seen vesicles.

Because this disease is no longer seen in the US, suspected FMD is extremely serious. The first step, a veterinarian should make is to call the State Veterinarian’s office which then sends an accredited personnel to take the appropriate samples. Half of the samples are sent to the Federal laboratory on Plum Island and the other half is sent to the local diagnostic laboratory. If the official representative thinks that the risk of FMD is low, farm personnel are authorized to go home but they are not allowed to go near pigs until the results come back negative. With the increase in Senecavirus cases, there is a fear of complacency. For every case of vesicular disease, contact the State Veterinarian.
Samples taken are usually fluid and epithelium from 5 different vesicles. Senecavirus can be tested by PCR whereas FMD can be tested by PCR and an ELISA targeting the antigens.

In cases of vesicles on a pig’s snout, what is the presumptive diagnosis?

There is no treatment for affected pigs. In cases of FMD, the State Veterinarian would put in place quarantine and eradication protocols to avoid the spread of the disease. In areas where FMD is still prevalent, vaccines are commonly used to help control the disease. In cases of Senecavirus, trying to make the pigs as comfortable as possible and avoiding infections of the lesions by keeping the wounds clean is the best course of action.

What is the first action a veterinarian must do if s.he sees a vesicle on a pig’s snout?