Swine Influenza Virus (SIV) is one of the leading causes of severe respiratory diseases in pigs. Out of the 3 types (A, B, and C), only influenza A creates issues in swine. That being said, there are many strains of the virus, subtyped by the nature of hemagglutinin (H or HA) and neuraminidase (N or NA) glycoproteins on the surface of the viral envelope. The influenza genome is made of 8 RNA segments, making it highly variable due to antigenic drift and antigenic shifts.

Antigenic shift: Mechanism by which two (or more) virus strains create a brand new strain by co-infecting a cell and exchanging entire segments of genetic material (H and/or N in the case of influenza). This new strain then possesses completely new antigens, making the population naive to it.Antigenic drift: Mechanism for variation in viruses that involves the accumulation of mutations within the genes that code for antibody-binding sites. This results in a new strain of virus particles which cannot be inhibited as effectively by the antibodies that were originally targeted against previous strains, making it easier for the virus to spread throughout a partially immune population.
Source: Wikipedia

The swine species is critical in the control of influenza because it is a great recombinant species. Indeed, pigs can replicate both human and avian strains in addition to the swine ones, promoting reassortments. [Remember the zoonotic pandemic of the H1N1 virus in 2009.] However, it is important to remember that in most cases, influenza is transmitted from the caretaker to the pigs and not the opposite.
Clinical signs in pigs are swift onset of fever, anorexia, inactivity, coughing, and labored abdominal breathing. As with every case of pyrexia, abortions may happen in sow farms.

Three main subtypes are seen today in the US, H1N1, H1N2 and H3N2. Several strains are of interest to understand the evolution of influenza genome over the years. The oldest flu strain dates back to the 1910s and is still called the Classical North American H1N1. Originating from a human virus, the Classical H1N1 gene segments can still be found in H1N1 strains today. Similarly, seasonal H3N2 strains can be found in swine from the human one, which was identified in 1968. Those 2 strains (H1N1 and H3N2) reasorted with some avian influenza viruses to create in 1998, the triple reassortant H1N2. This strain is very specific from North America. Finally, in 2009, an Asian strain of H1N1 reassorted with the Triple H1N2 to create the pandemic H1N1 virus. Obviously, this figure shows the major genetic changes, the antigenic shift; it is important to remember that many more changes occur to the genome in the form of antigenic drift. 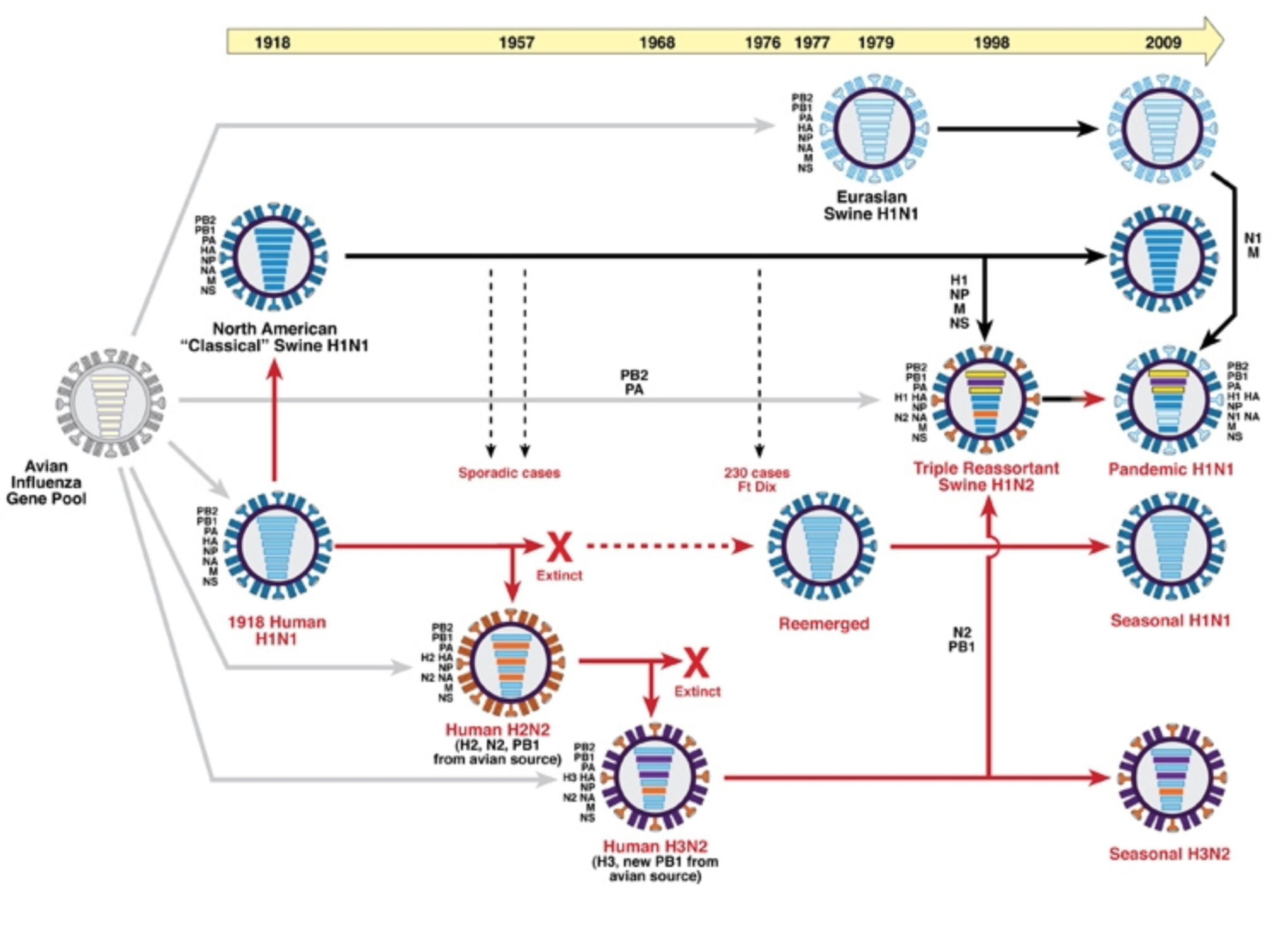 Evolution of swine influenza strains of the years | Source NIAID

Nose-to-nose contact is considered the main transmission route for swine influenza. Pigs shed a lot of virus that can be found in the nasal cavities and oral fluids. There is no viremia associated with influenza so there is no transmission in utero. Aerosol transmission can be an issue as viable influenza viruses are found on air particles. Influenza outbreaks in cooler climates used to occur when the temperatures dropped, late fall-beginning of winter. However, influenza is evolving to become a year-round disease, mainly due to the increased size of the swine facilities. In sow farms, the latest research has shown that the piglets are the subpopulation circulating the most viruses. Declining maternal immunity makes them more sensitive to the virus which then spreads to the farrowing room.

Apathy and anorexia are also typical of this disease. When one walks into a barn affected by swine influenza, the pigs are laying down, there is no movement, it is very difficult to get them to move. Conjunctivitis and nasal discharge may also be seen. Symptoms usually last about a week and can range widely in severity from pig to pig. Mortality is close to 100% if there is no immunity but mortality is rare if the disease is not complicated by co-infections. Outbreaks in the breeding herd lead to reproductive issues such as increased stillbirths, abortions, and lowered fertility. This cannot be linked directly to the virus, as the virus does not replicate in any part of the reproductive system but is a consequence of the high fever associated with the infection.

Swine influenza can be transmitted from the dam to the piglets in utero. True or False?

The lungs are the most affected organ by swine influenza. The cranial and cardiac lobes of the lungs fill with fluid, making them appear swollen, firm and purple. When performing a necropsy, there is a visible line of demarcation between the affected and unaffected lung tissue making it difficult to differentiate with enzootic pneumoniae. Additionally, areas of consolidation can extend up to the diaphragmatic lobes. Appearing like dark purple squares among light pink normal tissue, they give the lung the appearance of a checkerboard. Lymph nodes of the affected areas will also be swollen.

The epithelium of the respiratory airways (trachea and bronchi) undergoes necrosis and eventually fills up the alveoli in the lungs along with inflammatory cells. Neutrophils release enzymes contributing to the necrosis of lung tissues. A typical histological lesion of influenza is the lymphocytic cuffing of the airways containing necrotic debris.

Clinical signs associated with influenza are:

Clinical diagnosis of swine influenza is impaired by the nonspecific clinical signs. At necropsy, the lesions are very similar to enzootic pneumoniae. Therefore, laboratory testing is needed. Appropriate samples are nasal swabs for individual pigs, or oral fluids gathered via cotton ropes for group testing. Tissue samples, including trachea, bronchi, lungs, and lymph nodes can also be submitted. PCR tests are often used because they can give an indication on the virus subtype in addition to detect its genome. Virus isolation, especially from nasal swabs, is done to grow the farm strains and develop autogenous vaccines.
Antibodies assays are used to assess the status of a herd. Hemagglutination-Inhibition assay is the most sensitive test for the detection of influenza antibodies. Depending on the viral strain used, influenza subtypes can be determined. An ELISA has been developed to detect antibodies against the NP gene (segment 6) which is mostly conserved between strains; however, this technique does not allow the identification of the subtype.

A differential diagnosis for influenza should also include PRRS, enzootic pneumonia and bacterial co-infections. Co-infections are extremely common in respiratory diseases. Called the Porcine Respiratory Disease Complex, they should always be on the differential list.

What is the main macroscopic lesion associated with swine influenza?

There is no effective treatment for influenza, but antibiotics should be used on affected pigs to avoid a secondary bacterial infection. Aspirine can be given orally to decrease the fever and help the pigs recover. Prevention is mainly achieved through vaccination even though swine influenza is a moving target due to its high varaibility. Vaccines are typically killed whole virus products, commercial or autogenous to best adapt to the wide variety of strains. Vaccinating sows prefarrow helps protecting the piglets and decrease environmental contamination. Because of influenza zoonotic nature, it is frequently asked of farm hands to get annually vaccinated against influenza to avoid transmission. Influenza is an enveloped virus that does not survive for long in the environment and is sensitive to disinfection. All-in all-out management of the barns avoids transmission from one group to the next. However in large sites, the virus can get transmitted between barns. In swine dense areas, the eradication of swine influenza is extremely difficult due to the chances of reinfection.