Proliferative Enteropathy, most commonly called ileitis in practice, is an ubiquitous disease that may cause a wide variety of symptoms in grow-finish pigs, the most common of which is diarrhea. The causative agent of this disease is Lawsonia intracellularis. There are two common forms of the disease: acute/hemorrhagic and chronic. Both produce losses due to lower feed conversion and reduced daily gain. Vaccination is effective in limiting the severity of clinical signs and has decreased the impact of the disease in the US.

Lawsonia intracellularis is a curved gram-negative rod that grows in the intestinal epithelial cells, especially in the ileum of pigs. The bacteria is unable to grow in human intestines, however, so zoonosis is not a concern. Fecal-oral is the most common means of transmission of the disease. Ileitis is usually introduced to a new group of pigs via a carrier pigs or contaminated environment. Pigs can remain carriers of the disease up to 10 weeks after first being exposed, despite the clinical symptoms disappearing after a month. Straw bedding is an ideal place for bacteria to survive outside the pig, so animals housed in this type of situation should be monitored carefully.

Most often symptoms of infection by Lawsonia intracellularis are subclinical. However, pigs can present clinical signs either in the acute or chronic form.

The acute case occurs in older growing pigs and is similar to acute anemia. Dark diarrhea with unclotted blood is typically the first sign, followed by feebleness and occasionally death. If the disease occurs in a pregnant animal, reproductive issues such as abortion may be seen.

Chronic cases tend to occur in younger growing pigs, typically less than 20 weeks of age. Diarrhea and other clinical signs are less severe than in acute cases, but pigs will often display disinterest in food and lower daily weight gain. No blood can be seen in the stools.
Recovery of both cases will occur within a month, but the pigs will take longer to reach market weight.

The common lesion seen across all types of Lawsonia intracellularis infection is thickening of the mucosa in the small intestine and the ileum more particularly, giving it the feel of a “garden hose”. In the most acute cases, a large blood clot can be found in the lumen of the ileum. 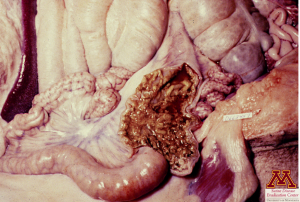 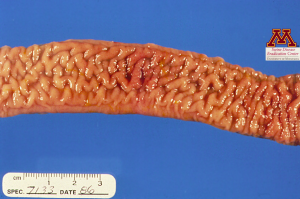 Under the microscope, enlarged intestinal crypts are the most common finding. Inflammation is almost never seen except in severe acute cases.

What is the most characteristic lesion associated with ileitis?

Lesions on acutely affected pigs are easily seen during a necropsy if the pig is killed during or shortly after infection. However, detecting Lawsonia intracellularis in fecal matter is the best way to get a definitive diagnosis. Culturing is relatively difficult since the bacteria lives inside of the cells, so PCR is the current standard test. Chronic animal often experience intermittent shedding leading to false negative PCR results. ELISA tests are a cheaper alternative to PCR and work well for group testing if the herd has not been vaccinated.

Acute ileitis should be differentiated from swine dysentery or gastric ulcers. Differentials for chronic ileitis include salmonellosis, and viral enteritis.

What is the best diagnostic test for ileitis in a vaccinated herd?

Antibiotics remain the best way to treat and control ileitis. Often administered through the drinking water, tylosin remains the preferred drug. Vaccinations are commonly used, either in injectable form or through the water. However, despite heavy control methods and effective vaccines and treatments, ileitis continues to be prevalent in North America, suggesting even “clean” herds can be carriers of the disease.