Brachyspira spp. Causes enteric symptoms of variable severity in swine. The most severe is swine dysentery characterized by hemorrhagic, mucoid diarrhea in growing pigs, caused most commonly by the bacteria Brachyspira hyodysenteriae, or the recently isolated Brachyspira hampsonii. By comparison, Brachyspira pilosicoli causes mild to moderate diarrhea  in growing pigs. Swine dysentery can cause major economic loss in a herd, both through death loss and reduced daily growth rate. While the disease still persists, it is considered under control in the United States.

Farrow-to-finish farms or partially slatted barns are most likely to be positive for swine dysentery. The first noticeable symptoms are gray to yellow diarrhea in growing pigs. In the next stage of the disease, as fast as a few hours after the beginning of the clinical signs, pigs will display mucus and fresh blood in their stools, that are quite characteristic of the pathogen. Just like with any other diarrhea, pigs become dehydrated and experience decreased daily gain that can persist even when the pigs recover. Mortality can be severe, up to 30% if left untreated. 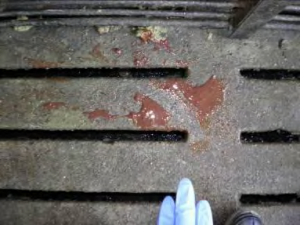 At necropsy, edema occurring in the large intestine can be noted in the early stages of infection. Later on, a thick, fibrinous, hemorrhagic mucus can be found on the surface of the colon.

Inflammation and hyperplasia of the crypt cells can occur within the colon in acute cases. Leukocytes are also present in increased numbers in the mucosa, while neutrophils center around the capillaries. Pseudomembranes made of fibrin may also form on the mucosa.

What is the most characteristic lesion associated with swine dysentery?

Untreated animals that have just began to show symptoms are the best source for sample collection, as this is the peak level of bacteria in the feces. Fecal samples, fecal swabs or colon tissue are the best samples. Anaerobic culture is still considered the gold standard for the diagnosis of swine dysentery but a PCR test on oral fluids or fecal samples can also be used.

Differential diagnosis of diarrhea in growing pigs should include salmonellosis and ileitis. Blood in the intestine can also be indicative of an ulcer (melena or of hemorrhagic bowel syndrome.

What is the best diagnostic test for swine dysentery?

The number of effective treatments for swine dysentery is decreasing, as antibiotic resistance is becoming a major problem. Therefore, a susceptibility panel should be run before selecting an antibiotic. Typically, tiamulin administered in the herd’s water proves to be an effective herd treatment. If the pig is in danger of dying, however, injection can be used.

The environment is the main source of reinfected pigs, so infected area should be thoroughly cleaned and disinfected in between batches of pigs. Stringent biosecurity measures, such as protective clothing and rodent control are necessary to maintain a negative herd. Vaccines have not proven cost efficient enough to be used regularly. Eradication of swine dysentery is possible either by depopulation of the herd or with a combination of medication, cleaning and disinfection techniques, and strict biosecurity measures.

Which of the following is NOT of concern for the eradication of swine dysentery?