Gastric ulcers are very common in the swine industry. Affected pigs will eat less, grow slower, and become re-affected easily after resolvement. Their impact is therefore mainly economical due to poor efficiency. Ulcers typically occur in rapidly growing pigs and are caused by erosion of the area where the esophagus meets the stomach, also known as the pars esophagea. There are a number of risk factors for ulcer formation, which will be discussed later.

Gastric ulcers are a result of repeated exposure to enzymes and gastric acids. The epithelium of the pars esophagea is non-glandular, meaning that it does not produce mucus and has no protection against the acidic liquids. This irritation can cause a number of problems as it worsens.
Pigs off-feed are the most at risk of developing ulcers. Therefore, constant attention must be paid to the feeders so that they remain full at all times. Another very important risk factor is the particle size of the feed. Grinding the grains finely increases feed efficiency by increasing the surface area available to enzymes to digest the feed but the finer the feed the higher the risk for the pig to develop an ulcer. Helicobacter pylori is a bacteria that causes ulcers in humans and there has been suggestion that this bacteria can play a role in swine ulcers as well. However, no credible research has been published in support of that theory. 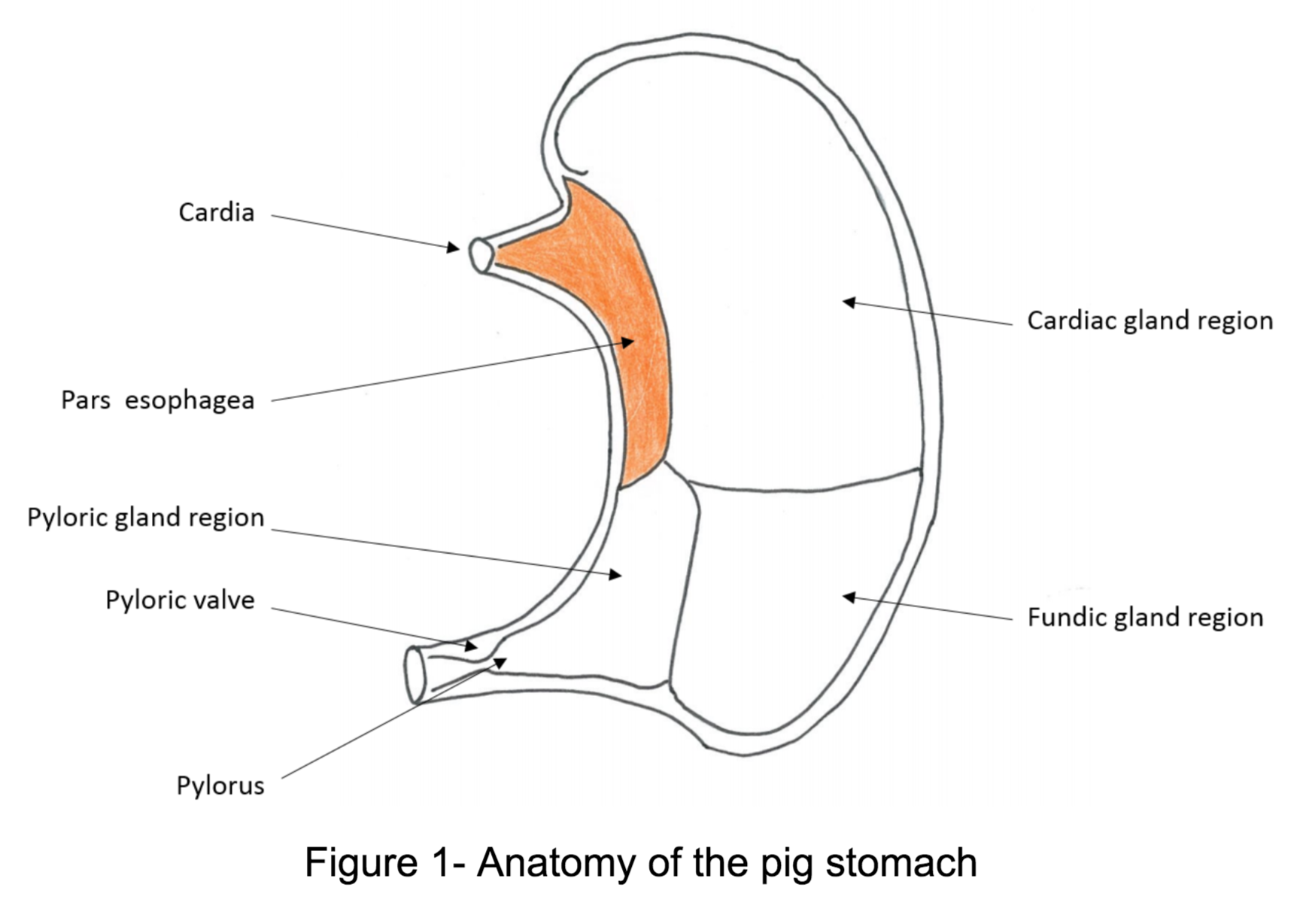 Most often, the disease is subclinical and the ulcer will be discovered at slaughter. The most severe (but rare) symptom associated with gastric ulcers is sudden death, caused by hemorrhage into the stomach. Other clinical signs are weakness, stunted growth, pale appearance due to anemia, and digested blood also called melena in the feces. Vomiting is not consistent.

Which part of the stomach is affected during gastric ulcers in pigs?

A common macroscopic lesion seen is paleness of the skin and internal organs. Ulcers in the pars esophagea are often easy to see, as they are deep pits in the stomach mucosa that are light in color. If the ulcer has healed a scar will be present. There will be dark, digested blood found in the stomach and the intestinal tract. 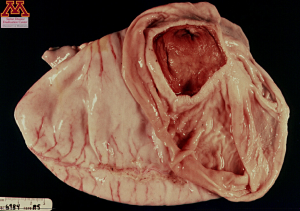 In commercial pigs, gastric ulceration can only be diagnosed by observing gross lesions at necropsy. However, clinical signs such as anemia and overall weakness or even sudden death of an otherwise healthy pig should raise suspicion of an ulcer. In cases of individual care for high value animals, an endoscopic examination can easily diagnosis a gastric ulcer.

When present, what is the most common clinical presentation of gastric ulcers in pigs?

Treatment of affected pigs is limited because most of the animals do not display any clinical signs and are hard to identify. Conflicted reports can be found in the literature regarding the use of sodium bicarbonate in the feed to decrease acidity levels. Proper nutrition and husbandry are the best ways to prevent gastric ulcers. It is critical to ensure that 1)the pigs have sufficient space at the feeder, 2)the feed never runs out and 3)the particle size is large enough. Other factors include providing an appropriate environment, especially temperature and humidity. Finally, many respiratory diseases can complicate ulcers, so vaccinating and treating for those diseases will help prevent ulceration.