First isolated in 1910, Glaesserella parasuis was originally known as Haemophilus influenzae because it resembled the human flu. Until recently (2020), the bacteria was known as Haemophilus parasuis but was renamed after the man who discovered it. Glaesserella parasuis is one of the main pathogens of importance in nursery pigs, causing polyserositis and lameness. The disease is ubiquitous and affects every country with pork production. Morbidity and mortality can vary between 5-10% and up to 70% in naive herds.

Piglets are infected very early in life. They come in contact with the bacteria when nursing the sow for colostrum. Research has proven that removing piglets before they can nurse keeps them naive of Glaesserella parasuis. Healthy carriers can shed the bacteria in their nasal discharge for up to 6 months, mixing pigs of different provenance should be done carefully.

Since the colonization of Glaesserella parasuis occurs while the piglets are still receiving colostrum, they also receive maternal antibodies to protect against disease. Poor management practices that disrupt the balance between antibody protection and bacterial load cause the development of clinical signs. Without enough support from the immune system, Glaesserella parasuis can invade endothelial cells in the lungs and reach major organs after a short septicemia. The severity of the disease is a result of several factors including type of strain, immunity level, presence of secondary pathogens and genetics.

There are multiple forms of the disease, including peracute, acute, and chronic.

The peracute form results in sudden death of seemingly healthy pigs with no sign of macroscopic lesions.

With typical acute disease, fever is the first sign followed by typical neurological symptoms. Paddling, lameness, and inability to rise are among the more common symptoms. Systemic disease can occur when bacteria migrate to other parts of the body. Swollen joints and trouble breathing result from infection in the joints and lungs, respectively. Other signs similar to pneumonia may occasionally be observed.

Chronically affected animals will often survive the acute stage, but will struggle to grow throughout their life and display arthritis. They will usually be condemned at slaughter due to polyserositis.

How do pigs get first infected by Haemophilus parasuis?

Pigs dying due to the peracute form of this disease often do not display any lesions due to sudden onset and subsequent death. Pigs that have been acutely affected will display lesions on the brain, heart, and joints. Polyserositis with meningitis, pericarditis, pleurisy, peritonitis and arthritis. The large quantity of fibrin present in the thoracic and abdominal cavities is typical of Glassër’s disease. Severe and large adherences between abdominal organs or between lungs and pleura make the necropsy more difficult. Arthritis accompanied by green to grey exudate is often found in the joints. Lungs may occasionally display hemorrhagic damage. 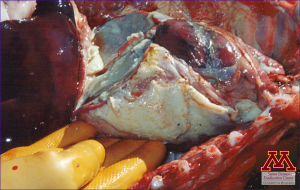 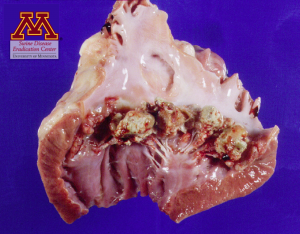 Fibrinous serositis is often the only microscopic lesion of consequence. Valvular vegetative endocarditis is more rarely seen than in cases of Streptococcosis.

The clinical presentation is almost non differentiable from infection with Streptococcus suis. Therefore, laboratory tests are necessary in addition to necropsy findings. Glaesserella parasuis can be isolated by culture but it is a fragile bacteria that can easily die during transport from the farm to the laboratory. Swabbing the fibrinous area during necropsy results in the highest chance of success if Amies media is used for transport.
PCR on tissue such as brain, lungs, pericardium fluid or joint swab, is the standard test, as it is highly sensitive. ELISA tests have been developed but their interpretation is challenging due to the fact that most piglets get infected during their first days of life.

What is the best diagnostic test for Glassër’s disease?

Antibiotic treatment of infected pigs is successful as long as it is given by injection: affected pigs are unlikely to rise and eat or drink. Multiple resistances have been reported for Glaesserella parasuis, therefore a susceptibility profile should be done. Vaccines are available and effective, as long as the proper strains are chosen. Before vaccinating, isolation and serotyping the strains commonly found in the herd should be done to develop an autogenous vaccine.
Preventing development of the disease by good management practices such as good ventilation and appropriate stocking density are also effective. Cleaning and disinfection of the barns are great control measures since the bacteria has very little resistance in the environment. Finally, eradication methods are difficult due to the commensal nature of the bacteria. Some farms have managed to eliminate Glaesserella parasuis, but those herds can easily be re-infected by the introduction of a healthy carrier pig. In this case, mortality is severe, reaching up to 70%.

Elimination of Haemophilus parasuis is a recommended method of control. True or False?