Actinobacillus pleuropneumoniae (App) is a bacteria found world-wide and causing necrotic and fibrinohemorrhagic pleuropneumonia, with high mortality rates in most severe cases. App has a large number of strains that vary widely in virulence but only colonizes the respiratory tract of pigs. Environmental conditions, age of the animal, and level of immunity can also influence the severity of the clinical presentation. Subclinical infection is common with pigs carrying the bacteria in their tonsils without exhibiting clinical signs, making the disease is frustrating to treat and control.

Like the similar App, Actinobacillus suis is an ubiquitous pathogenic bacteria that can cause severe respiratory disease associated with mortality. Additionally, A. suis can cause septicemia and spread to other organs.

App is an encapsulated, gram negative, rod that looks similar to other cocci bacteria under a microscope. App only infects pigs and stays within the respiratory tract. The serotypes, however, vary widely from region to region. Many herds are infected with multiple strains, but most are of low virulence. There are many strains present in the United States, but the ones causing most severe symptoms are serotypes 1 and 5. Transmission of App occurs via the oronasal route after direct contact with an infected pigs. The disease is usually introduced into a herd by an infected animal coming into a naive population. Closely located pig units have been demonstrated to be an infection risk, but transmission is quite rare. The disease stays in herds via vertical transmission between piglets and infected sows as well as horizontal transmission. Recovered animals can remain carriers for months since App can persist in the tonsils. Healthy animals can also be carriers without showing symptoms. App must reach the alveoli to cause pleuropneumonia, so the mucociliary apparatus or any immune response can prevent development of the disease. If the mucociliary apparatus is damaged by a previous illness such as enzootic pneumonia however, it can be ineffective in keeping out the bacteria.

A.suis has not been extensively studied, so little is known about its etiology. Unlike App, A. suis appears to only have one serotype, but produces similar toxins. It is thought that A. suis is transmitted along the same oral-nasal route as App, with tonsils being the first stop on the infectious route.

Why are App and A.suis relevant in pig production?

Clinical signs associated with an App infection can be seen in three main forms: peracute, acute, and chronic. All stages can develop within a herd at the same time.

Peracute is the fastest and most severe form. Most often the first noticed symptom is sudden death of growing, healthy-looking pigs, accompanied by a profuse blood-tinged foam at the snout and mouth. Clinical signs if seen are non specific: pyrexia, anorexia, and apathy. Death occurs due to heart failure and quickly, cyanosis of the extremities can be seen. Time from infection to death can be as little as three hours.

The acute form has other noticeable symptoms before death including fever, anorexia, severe dyspnea, coughing and mouth breathing. Cyanosis of the extremities can be seen as well. Death can occur within 24 hours, often as a result of cardiac failure.

If pigs survive the acute form or if they are infected but have a higher immune response, they can develop a chronic infection. An irregular cough develops and appetite is reduced, resulting in reduced daily gain rate. Chronically affected pigs are often have lower levels of energy and lag behind the group when moved.

Like App, in most severe cases of A. suis infection, the first noticeable symptom is sudden death. Lameness, neurological issues, abortions, and arthritis are all possible symptoms due to the septicemic nature of the infection. Pigs may also present rhomboid skin lesions that are similar to erysipelas. A respiratory form strongly resembles chronic App, with issues manifesting in the respiratory system, including coughing and fever.

How do pigs get infected by App or A.suis?

Lesions associated with App are found almost exclusively on the lungs, but vary widely depending on what level of infection the pig had. In peracute cases, the bronchi and trachea is filled by the blood tinged mucus, clogging the airways. In acute cases, the surface of the lungs is covered in layers of fibrin and appears rubbery with a red-purple color. The lungs present a fibrinohemorrhagic necrotizing pneumonia. Chronic cases display excessive fibrosis that causes adhesion of lungs to the rib cage. In necropsy, the lungs are often torn at removal as a result of the adhesion. Additionally, the healing of affected lung areas creates large abscesses or sequestra, made of the necrotic debris from the acute infection, surrounded by fibrous scar tissue. 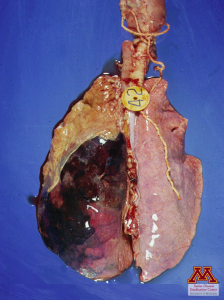 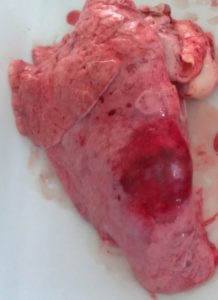 In A.suis cases, the macroscopic lesions on the lungs are non differentiable from App and show a fibrinohemorrhagic necrotizing pneumonia. Occasionally, less severe disease will show slight signs of swelling due to extra fluid in the lungs. Contrary to App, A.suis is septicemic and can therefore cause severe polyserositis with accumulation of fibrin in the thorax, abdomen and pericardium but also swollen joints due to arthritis.

App lesions in the lungs are areas of necrosis infiltrated by large amounts of leukocytes that are often smudged giving them the name of “oat cells”. Surrounding tissues show large infiltration of neutrophils.

The main microscopic lesion seen in A.suis infections is necrosis in a variety of other organs, resulting from lack of blood flow due to bacteria-caused thromboemboli.

What is the most typical sign associated with App infection

Clinical presentation is very suggestive of an infection by App or A.suis but only laboratory work can differentiate the 2 pathogens. Culture and identification of App or A.suis can be easily done. Samples should be taken from the acutely lesioned portion of the lungs. PCR can be done to further characterize the isolates and determine their subtypes in case of reinfection. Serology is useful to determine the status of a herd and/or identify subclinical carriers but it does not allow to differentiate which subtype  antibodies were created against.

Both App and A.suis should be considered when faced with severe pleuropneumoniae. S.suis, and H.parasuis can also lead to sudden death. M.hyorhinis is a cause of polyserositis and respiratory signs is pigs.

App and A.suis can be differentiated at necropsy. True or False?

App is typically susceptible to a variety of antibiotics such as cephalosporins, tetracyclines, macrolides, and quinolones, but recently reports of resistant App strains have surfaced in the United States and other countries so a sensitivity test is recommended. Antibiotics are most effective when administered very early in the course of the disease, otherwise lesions will not heal and remain a source of bacteria that can continue to affect the pigs. Infection in the herd can be maintained by pigs on which the treatment does not work well making the pigs chronic carriers that should be removed from the herd. Commercial and autogenous vaccines have been developed to protect the herds but they are limited to one serotype, allowing protecting against others only by cross-reaction. App is susceptible to all the major disinfectants. All-in all-out management and thorough cleaning and disinfection between groups are critical to stop the transmission of the disease. Due to its high mortality and major economic losses, eradication of App should be the goal of the producer and veterinarian.

Just like App, A. suis responds very well to early antibiotic treatment. No vaccine has been created yet.