How Do Cultures Change?

Culture is part of a company’s DNA and is resistant to change efforts. Unfortunately, many organizations may not even realize that their current culture constitutes a barrier against organizational productivity and performance. Changing company culture may be the key to the company turnaround when there is a mismatch between an organization’s values and the demands of its environment.

Certain conditions may help with culture change. For example, if an organization is experiencing failure in the short run or is under threat of bankruptcy or an imminent loss of market share, it would be easier to convince managers and employees that culture change is necessary. A company can use such downturns to generate employee commitment to the change effort. However, if the organization has been successful in the past, and if employees do not perceive an urgency necessitating culture change, the change effort will be more challenging. Sometimes the external environment may force an organization to undergo culture change. Mergers and acquisitions are another example of an event that changes a company’s culture. In fact, the ability of the two merging companies to harmonize their corporate cultures is often what makes or breaks a merger effort. When Ben & Jerry’s was acquired by Unilever, Ben & Jerry’s had to change parts of its culture while attempting to retain some of its unique aspects. Corporate social responsibility, creativity, and fun remained as parts of the culture. In fact, when Unilever appointed a veteran French executive as the CEO of Ben & Jerry’s in 2000, he was greeted by an Eiffel tower made out of ice cream pints, Edith Piaf songs, and employees wearing berets and dark glasses. At the same time, the company had to become more performance oriented in response to the acquisition. All employees had to keep an eye on the bottom line. For this purpose, they took an accounting and finance course for which they had to operate a lemonade stand (Kiger, 2005). Achieving culture change is challenging, and many companies ultimately fail in this mission. Research and case studies of companies that successfully changed their culture indicate that the following six steps increase the chances of success (Schein, 1990). 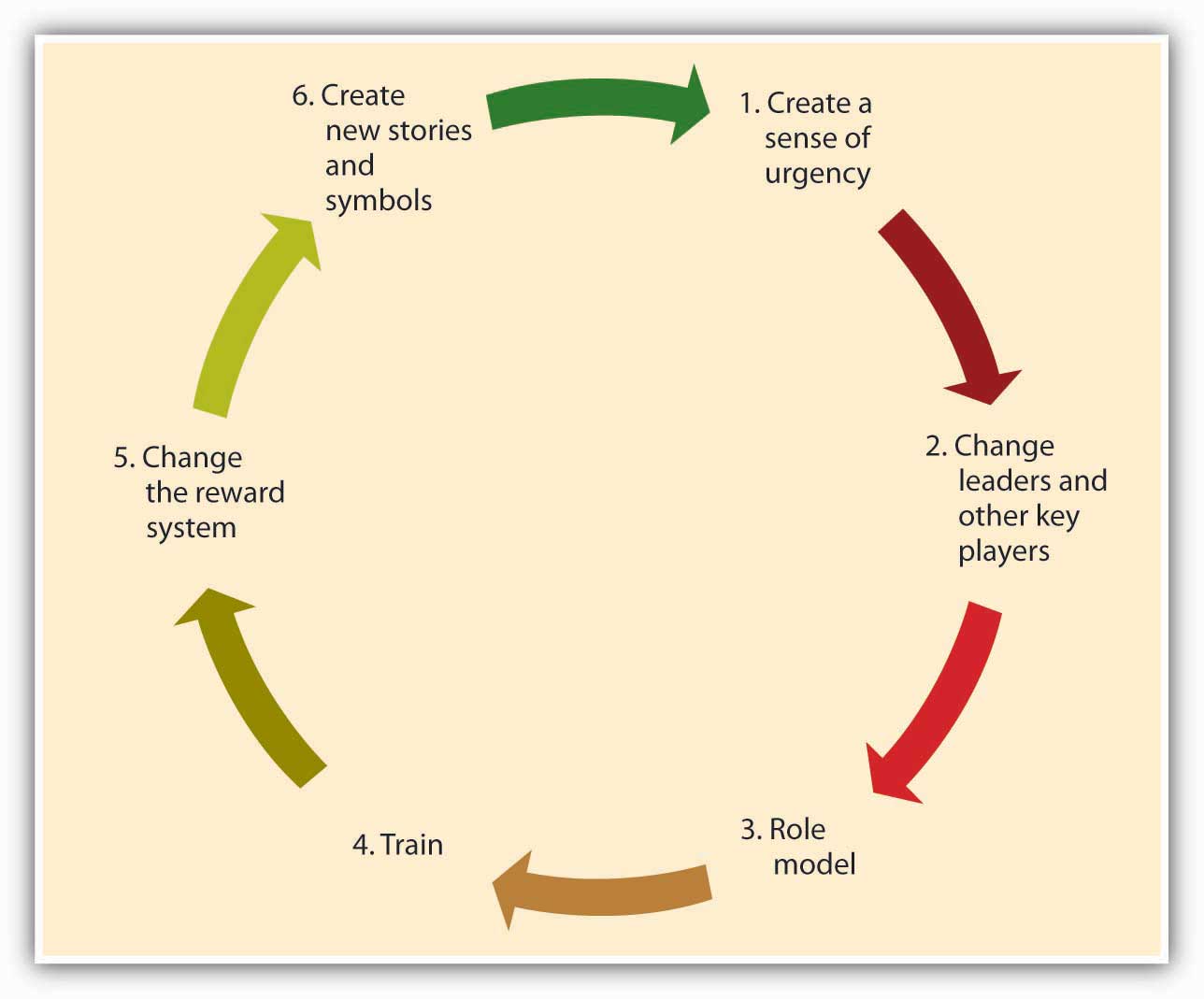 Creating a Sense of Urgency

In order for the change effort to be successful, it is important to communicate the need for change to employees. One way of doing this is to create a sense of urgency on the part of employees and explain to them why changing the fundamental way in which business is done is so important. In successful culture change efforts, leaders communicate with employees and present a case for culture change as the essential element that will lead the company to eventual success. As an example, consider the situation at IBM Corporation in 1993 when Lou Gerstner was brought in as CEO and chairman. After decades of dominating the market for mainframe computers, IBM was rapidly losing market share to competitors, and its efforts to sell personal computers—the original “PC”—were seriously undercut by cheaper “clones.” In the public’s estimation, the name IBM had become associated with obsolescence. Gerstner recalls that the crisis IBM was facing became his ally in changing the organization’s culture. Instead of spreading optimism about the company’s future, he used the crisis at every opportunity to get buy-in from employees (Gerstner, 2002).

Changing Leaders and Other Key Players

A leader’s vision is an important factor that influences how things are done in an organization. Thus, culture change often follows changes at the highest levels of the organization. Moreover, in order to implement the change effort quickly and efficiently, a company may find it helpful to remove managers and other powerful employees who are acting as a barrier to change. Because of political reasons, self interest, or habits, managers may create powerful resistance to change efforts. In such cases, replacing these positions with employees and managers giving visible support to the change effort may increase the likelihood that the change effort succeeds. For example, when Robert Iger replaced Michael Eisner as CEO of the Walt Disney Company, one of the first things he did was to abolish the central planning unit, which was staffed by people close to ex-CEO Eisner. This department was viewed as a barrier to creativity at Disney, and its removal from the company was helpful in ensuring the innovativeness of the company culture (McGregor et al., 2007).

Role modeling is the process by which employees modify their own beliefs and behaviors to reflect those of the leader (Kark & Dijk, 2007). CEOs can model the behaviors that are expected of employees to change the culture. The ultimate goal is that these behaviors will trickle down to lower level employees. For example, when Robert Iger took over Disney, in order to show his commitment to innovation, he personally became involved in the process of game creation, attended summits of developers, and gave feedback to programmers about the games. Thus, he modeled his engagement in the idea creation process. In contrast, modeling of inappropriate behavior from the top will lead to the same behavior trickling down to lower levels. A recent example of this type of role modeling is the scandal involving Hewlett-Packard Development Company LP board members. In 2006, when board members were suspected of leaking confidential company information to the press, the company’s top-level executives hired a team of security experts to find the source of the leak. The investigators sought the phone records of board members, linking them to journalists. For this purpose, they posed as board members and called phone companies to obtain the itemized home phone records of board members and journalists. When the investigators’ methods came to light, HP’s chairman and four other top executives faced criminal and civil charges. When such behavior is modeled at top levels, it is likely to have an adverse impact on the company culture (Barron, 2007).

Well-crafted training programs may be instrumental in bringing about culture change by teaching employees the new norms and behavioral styles. For example, after the space shuttle Columbia disintegrated upon reentry from a February 2003 mission, NASA decided to change its culture to become more safety sensitive and minimize decision-making errors leading to unsafe behaviors. The change effort included training programs in team processes and cognitive bias awareness. Similarly, when auto repairer Midas International Corporation felt the need to change its culture to be more committed to customers, they developed a training program making employees familiar with customer emotions and helping form better connections with them. Customer reports have been overwhelmingly positive in stores that underwent this training (BST to guide culture change effort at NASA, 2004).

The criteria with which employees are rewarded and punished have a powerful role in determining the cultural values in existence. Switching from a commission-based incentive structure to a straight salary system may be instrumental in bringing about customer focus among sales employees. Moreover, by rewarding employees who embrace the company’s new values and even promoting these employees, organizations can make sure that changes in culture have a lasting impact. If a company wants to develop a team-oriented culture where employees collaborate with each other, methods such as using individual-based incentives may backfire. Instead, distributing bonuses to intact teams might be more successful in bringing about culture change.

Finally, the success of the culture change effort may be increased by developing new rituals, symbols, and stories. Continental Airlines Inc. is a company that successfully changed its culture to be less bureaucratic and more team oriented in the 1990s. One of the first things management did to show employees that they really meant to abolish many of the detailed procedures the company had and create a culture of empowerment was to burn the heavy 800-page company policy manual in their parking lot. The new manual was only 80 pages. This action symbolized the upcoming changes in the culture and served as a powerful story that circulated among employees. Another early action was the redecorating of waiting areas and repainting of all their planes, again symbolizing the new order of things (Higgins & McAllester, 2004). By replacing the old symbols and stories, the new symbols and stories will help enable the culture change and ensure that the new values are communicated.

Organizations need to change their culture to respond to changing conditions in the environment, to remain competitive, and to avoid complacency or stagnation. Culture change often begins by the creation of a sense of urgency. Next, a change of leaders and other key players may enact change and serve as effective role models of new behavior. Training can also be targeted toward fostering these new behaviors. Reward systems are changed within the organization. Finally, the organization creates new stories and symbols.