Herb’s Concoction (and Martha’s Dilemma): The Case of the Deadly Fertilizer[1]

Martha Wang worked in the Consumer Affairs Department of a company called Herb’s Garden Products. Martha was a relatively new employee and had only worked there 6 months, while most employees at Herb’s had been with the company since its beginning back in 1958. She enjoyed her job and hoped to be promoted at her next performance appraisal. One especially exciting part of working at Herb’s was that they had made a public commitment to protecting the environment. There were regular meetings at work about the choice to brand the organization in this way, sell their products at “green” markets, and capture some of the growing consumer market for natural products. Martha’s values were closely aligned with this mentality, so she really loved her new job at Herb’s Garden Products. How quickly things change.

One day, Martha received a call from a dissatisfied customer who complained that Herb’s Special Fertilizer Mix killed her dog, an expensive and beloved toy poodle. Martha knew that the fertilizer was made mostly of fish byproducts and chicken manure, but she had also heard there was a “secret ingredient” that had only been revealed to long-time employees. The company had advertised the product as “safe enough to eat for breakfast” and “able to work wonders on any plant.” However, Martha had used the product only once herself. Shortly after applying the fertilizer, Martha found several dead birds near the garden where she had spread the most fertilizer. At the time, she convinced herself this was just a coincidence. Listening now to this customer describing the death of her small dog after lying on the soil near the fertilizer, Martha began to wonder if those birds had perished for the same reason. Martha took the customer’s name and number and went immediately to her boss.

Martha’s boss was Herb’s nephew, Mac. Once Martha explained her story about her own experience with the fertilizer and the customer’s claim that it killed her dog, Mac began to smile. “Some people will complain about the littlest things,” Mac said. Martha protested that it was her job as a consumer affairs officer to address the serious concerns of this customer and follow company procedure to ensure the safety of future customers and their pets. Mac laughed and said, “You really believe that something is wrong with our product? We’ve been selling this fertilizer for 35 years. People love it! Now and again someone whines about finding dead animals, but that’s just their imagination. After all, we use all-natural ingredients!” Martha thanked Mac for his help and slowly headed back toward her cubicle. She felt extremely confused and torn about her role at this point. What should she tell the customer when she called her back? Was the fertilizer safe? Should she worry about working in a place with potentially dangerous products? What about quality issues for the company’s products in general? Were Herb’s other products unsafe or of poor quality? What might be the environmental impact of this product as it runs off into lakes and streams? As her head began to spin with the difficulty of the task ahead of her, the phone suddenly rang. It was Herb himself, the owner and founder of the company. “Martha,” the voice on the other line whispered, “Herb’s Special Fertilizer is our best seller! Don’t let us down.”

NOW It Is Your Turn

Instructions: Using only four straight lines, intersect all the dots without ever lifting up your pen or pencil. 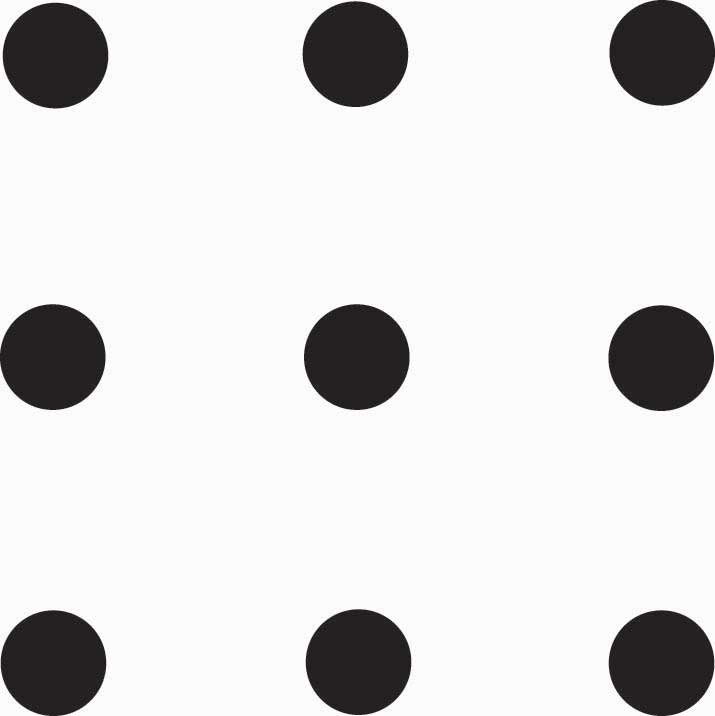 Warning: Do not discuss this exercise with other members of your class until instructed to do so.

You are a member of the moon space crew originally scheduled to rendezvous with a mother ship on the lighted surface of the moon. Due to mechanical difficulties, however, your ship was forced to land at a spot some 200 miles (320 km) from the rendezvous point. During reentry and landing, much of the equipment aboard was damaged, and because survival depends on reaching the mother ship, the most critical items available must be chosen for the 200-mile (320 km) trip. Please see the list of the 15 items left intact and undamaged after landing. Your task is to rank the items in terms of their importance for your crew to reach the rendezvous point. Place the number 1 by the most important, 2 by the next most important, and so on, with 15 being the least important.