Computing hardware needs to be controlled, and that’s the role of the operating system. The operating system (sometimes called the “OS”) provides a common set of controls for managing computer hardware, making it easier for users to interact with computers and for programmers to write application software. Just about every computing device has an operating system—desktops and laptops, enterprise-class server computers, your mobile phone. Even specialty devices like iPods, video game consoles, and television set top boxes run some form of OS.

Some firms, like Apple and Nintendo, develop their own proprietary OS for their own hardware. Microsoft sells operating systems to everyone from Dell to the ATM manufacturer Diebold (listen for the familiar Windows error beep on some cash machines). And there are a host of specialty firms, such as Wind River (purchased by Intel), that help firms develop operating systems for all sorts of devices that don’t necessarily look like a PC, including cars, video editing systems, and fighter jet control panels.

Anyone who has used both a PC and a Mac and has noticed differences across these platforms can get a sense of the breadth of what an operating system does. Even for programs that are otherwise identical for these two systems (like the Firefox browser), subtitle differences are visible. Screen elements like menus, scroll bars, and window borders look different on the Mac than they do in Windows. So do the dialogue boxes that show up when you print or save.

These items look and behave differently because each of these functions touches the hardware, and the team that developed Microsoft Windows created a system distinctly different from their Macintosh counterparts at Apple. Graphical user interface (UI) items like scroll bars and menus are displayed on the hardware of the computer display. Files are saved to the hardware of a hard drive or other storage device. Most operating systems also include control panels, desktop file management, and other support programs to work directly with hardware elements like storage devices, displays, printers, and networking equipment. The Macintosh Finder and the Windows Explorer are examples of components of these operating systems. The consistent look, feel, and functionality that operating systems enforce across various programs help make it easier for users to learn new software, which reduces training costs and operator error. See Figure 9.2 for similarities and differences. 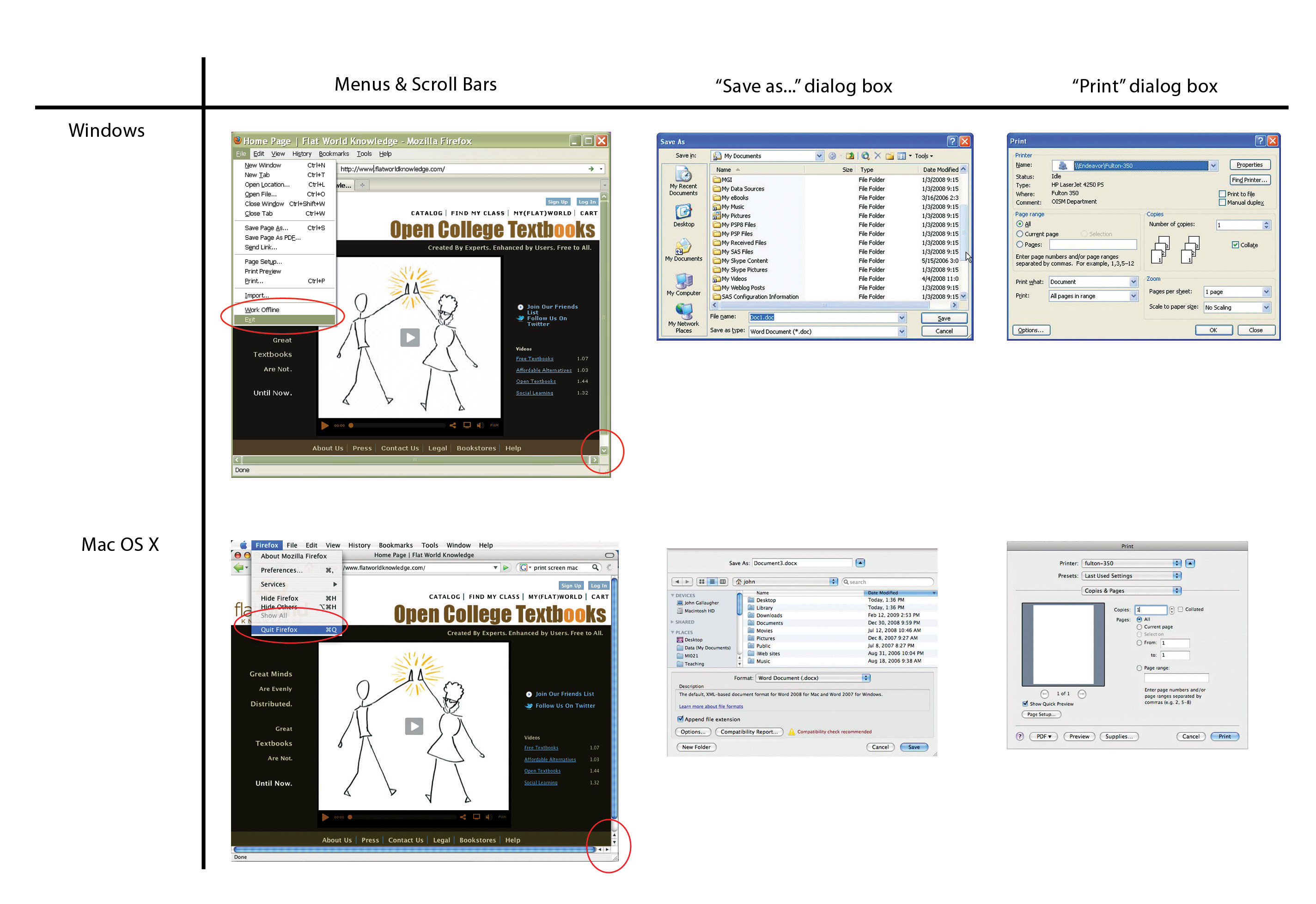 Differences between the Windows and Mac operating systems are evident throughout the user interface, particularly when a program interacts with hardware.

Operating systems are also designed to give programmers a common set of commands to consistently interact with the hardware. These commands make a programmer’s job easier by reducing program complexity and making it faster to write software while minimizing the possibility of errors in code. Consider what an OS does for the Wii game developer. Nintendo’s Wii OS provides Wii programmers with a set of common standards to use to access the Wiimote, play sounds, draw graphics, save files, and more. Without this, games would be a lot more difficult to write, they’d likely look differently, be less reliable, would cost more, and there would be fewer titles available.

Similarly, when Apple provided developers with a common set of robust, easy-to-use standards for the iPhone and (via the App Store) an easy way for users to install these applications on top of the iPhone/iPod touch OS, software development boomed, and Apple became hands-down the most versatile mobile computing device available1. In Apple’s case, some fifty thousand apps became available through the App Store in less than a year. A good OS and software development platform can catalyze network effects (see Chapter 6 “Understanding Network Effects”). While the OS seems geeky, its effective design has very strategic business implications! 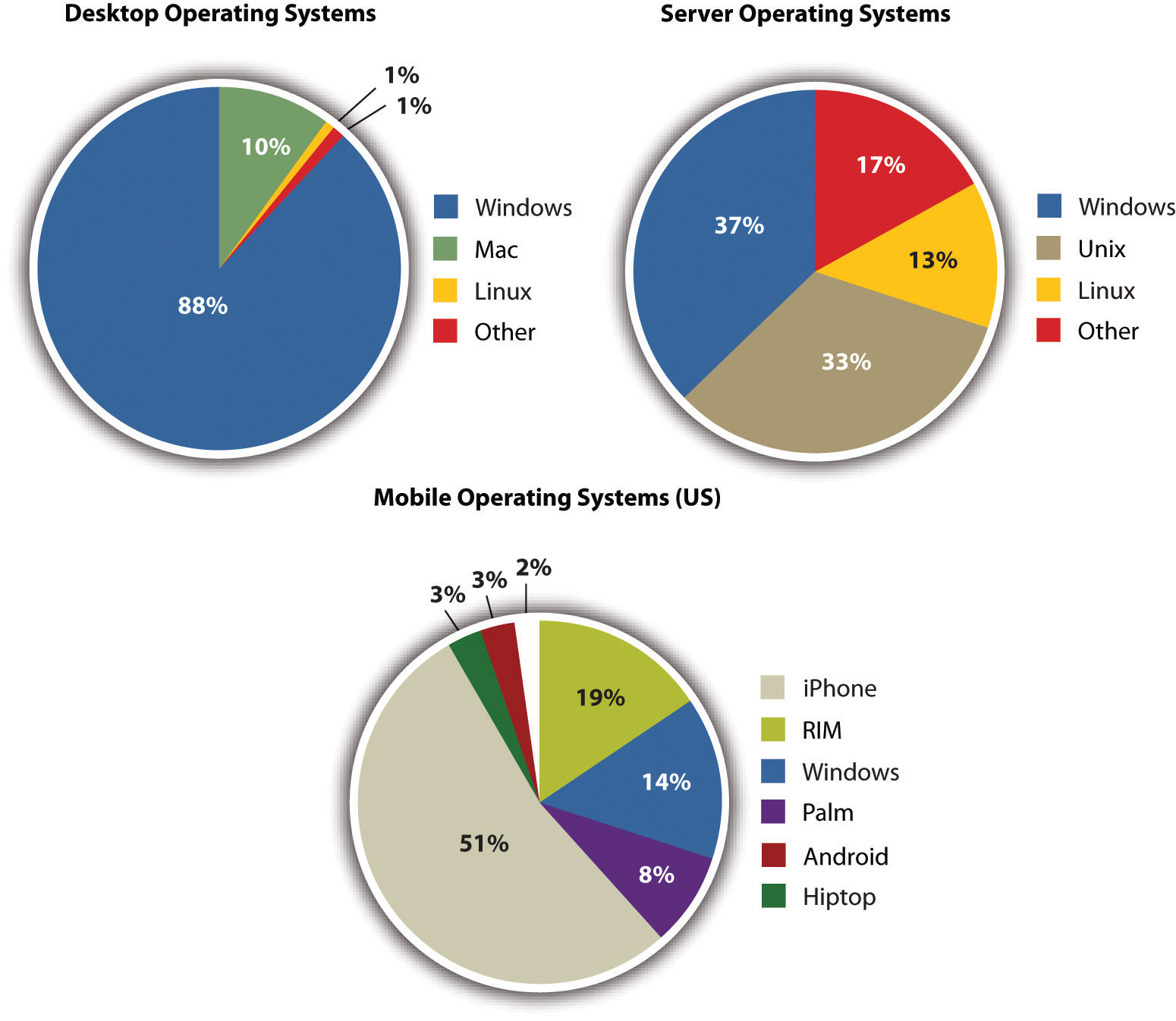 Most personal computers have an operating system installed on their hard drives. This system allows the OS to be replaced or upgraded easily. But many smaller, special-purpose computing devices have their operating systems installed on nonvolatile memory, often on read-only memory (ROM) chips. Control programs stored on chips are sometimes referred to as firmware. The OS in an iPod, mobile phone, or your TV’s set-top box is most likely stored as firmware. Your PC also has a tiny bit of firmware that allows it to do very basic functions like start-up (boot) and begin loading its operating system from disk.

Another term you might hear is embedded systems. As computing gets cheaper, special-purpose technology is increasingly becoming embedded into all sorts of devices like cars, picture frames, aircraft engines, photocopiers, and heating and air conditioning systems. The software programs that make up embedded systems are often stored as firmware too.

Moore’s Law (see Chapter 5 “Moore’s Law: Fast, Cheap Computing and What It Means for the Manager”) enables embedded systems, and these systems can create real strategic value. The Otis Elevator Company, a division of United Technologies, uses embedded systems in its products to warn its service centers when the firm’s elevators, escalators, and moving walkways need maintenance or repair. This warning provides Otis with several key benefits: