It has often been said that the first phase of the Internet was about putting information online and giving people a way to find it. The second phase of the Web is about connecting people with one another. The Web 2.0 movement is big and impactful, but is there much money in it?

While the valuations of private firms are notoriously difficult to pin down due to a lack of financial disclosure, the often-cited $15 billion valuation from the fall of 2007 Microsoft investment was rich, even when made by such a deep-pocketed firm. Using estimates at the time of the deal, if Facebook were a publicly traded company, it would have a price-to-earnings ratio of five hundred; Google’s at the time was fifty-three, and the average for the S&P 500 is historically around fifteen.

But the math behind the deal is a bit more complex than was portrayed in most press reports. The deal was also done in conjunction with an agreement that for a time let Microsoft manage the sale of Facebook’s banner ads worldwide. And Microsoft’s investment was done on the basis of preferred stock, granting the firm benefits beyond common stock, such as preference in terms of asset liquidation (Stone, 2008). Both of these are reasons a firm would be willing to “pay more” to get in on a deal.

Another argument can be made for Microsoft purposely inflating the value of Facebook in order to discourage rival bidders. A fat valuation by Microsoft and a deal locking up ad rights makes the firm seem more expensive, less attractive, and out of reach for all but the richest and most committed suitors. Google may be the only firm that could possibly launch a credible bid, and Zuckerberg is reported to be genuinely uninterested in being absorbed by the search sovereign (Vogelstein, 2009).

Since the fall of 2007, several others have invested private money into Facebook as well, including the Founders Fund and Li Ka-shing, the Hong Kong billionaire behind Hutchison Whampoa. Press reports and court documents suggest that these deals were done at valuations that were lower than what Microsoft accepted. In May 2009 Russian firm Digital Sky paid $200 million for 1.96 percent of the firm, a ten-billion-dollar valuation (also in preferred stock). That’s a one-third haircut off the Microsoft price, albeit without the Redmond-specific strategic benefits of the investment (Kirkpatrick, 2008; Ante, 2008). And as the chart in Figure 8.2 “Revenue per User (2009)” shows, Facebook still lags well behind many of its rivals in terms of revenue per user. 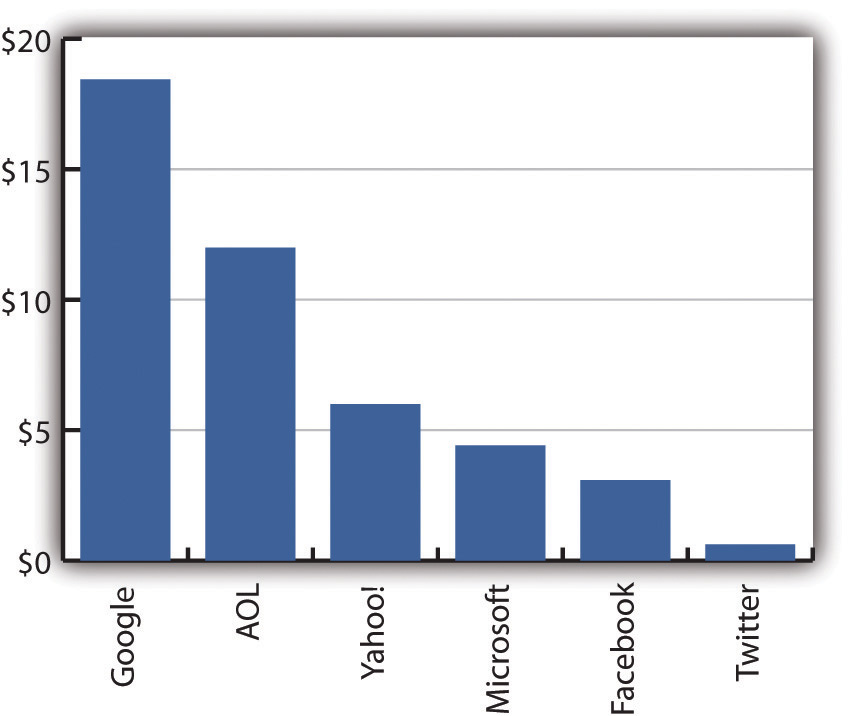 While Facebook’s reach has grown to over half a billion visitors a month, its user base generates far less cash on a per-person basis than many rivals do (Blodget, 2010).

So despite the headlines, even at the time of the Microsoft investment, Facebook was almost certainly not valued at a pure $15 billion. This isn’t to say definitively that Facebook won’t be worth $15 billion (or more) someday, but even a valuation at “just” $10 billion is a lot to pay for a then-profitless firm with estimated 2009 revenues of $500 million. Of course, raising more capital enables Zuckerberg to go on the hunt as well. Facebook investor Peter Theil confirmed the firm had already made an offer to buy Twitter (a firm which at the time had zero dollars in revenues and no discernible business model) for a cool half billion dollars (Ante, 2009).

Much remains to be demonstrated for any valuation to hold. Facebook is new. Its models are evolving, and it has quite a bit to prove. Consider efforts to try to leverage friend networks. According to Facebook’s own research, “an average Facebook user with 500 friends actively follows the news on only forty of them, communicates with twenty, and keeps in close touch with about ten. Those with smaller networks follow even fewer” (Baker, 2009). That might not be enough critical mass to offer real, differentiable impact, and that may have been part of the motivation behind Facebook’s mishandled attempts to encourage more public data sharing. The advantages of leveraging the friend network hinge on increased sharing and trust, a challenge for a firm that has had so many high-profile privacy stumbles. There is promise. Profiling firm Rapleaf found that targeting based on actions within a friend network can increase click-through rates threefold—that’s an advantage advertisers are willing to pay for. But Facebook is still far from proving it can consistently achieve the promise of delivering valuable ad targeting.

Steve Rubel wrote the following on his Micro Persuasion blog: “The Internet amber is littered with fossilized communities that once dominated. These former stalwarts include AOL, Angelfire, theGlobe.com, GeoCities, and Tripod.” Network effects and switching cost advantages can be strong, but not necessarily insurmountable if value is seen elsewhere and if an effort becomes more fad than “must have.” Time will tell if Facebook’s competitive assets and constant innovation are enough to help it avoid the fate of those that have gone before them.

Baker, S., “Learning and Profiting from Online Friendships,” BusinessWeek, May 21, 2009.