Google has been called a one-trick pony (Li, 2009), but as tricks go, it’s got an exquisite one. Google’s “trick” is matchmaking—pairing Internet surfers with advertisers and taking a cut along the way. This cut is substantial—about $23 billion in 2009. In fact, as Wired’s Steve Levy puts it, Google’s matchmaking capabilities may represent “the most successful business idea in history” (Levy, 2009). For perspective, consider that as a ten-year-old firm, and one that had been public for less than five years, Google had already grown to earn more annual advertising dollars than any U.S. media company. No television network, no magazine group, no newspaper chain brings in more ad bucks than Google. And none is more profitable. While Google’s stated mission is “to organize the world’s information and make it universally accessible and useful,” advertising drives profits and lets the firm offer most of its services for free. 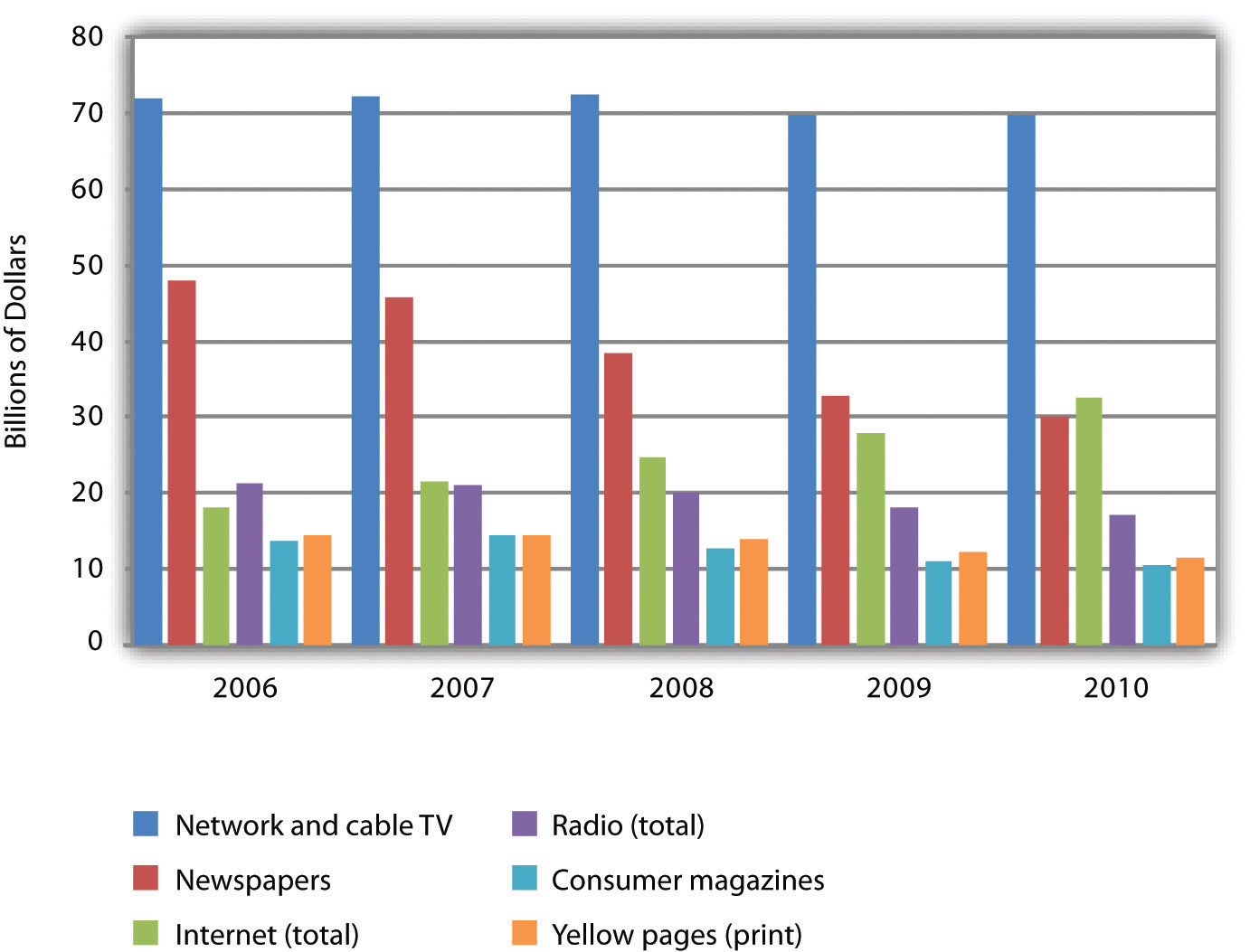 Online advertising represents the only advertising category trending with positive growth. Figures for 2009 and beyond are estimates. 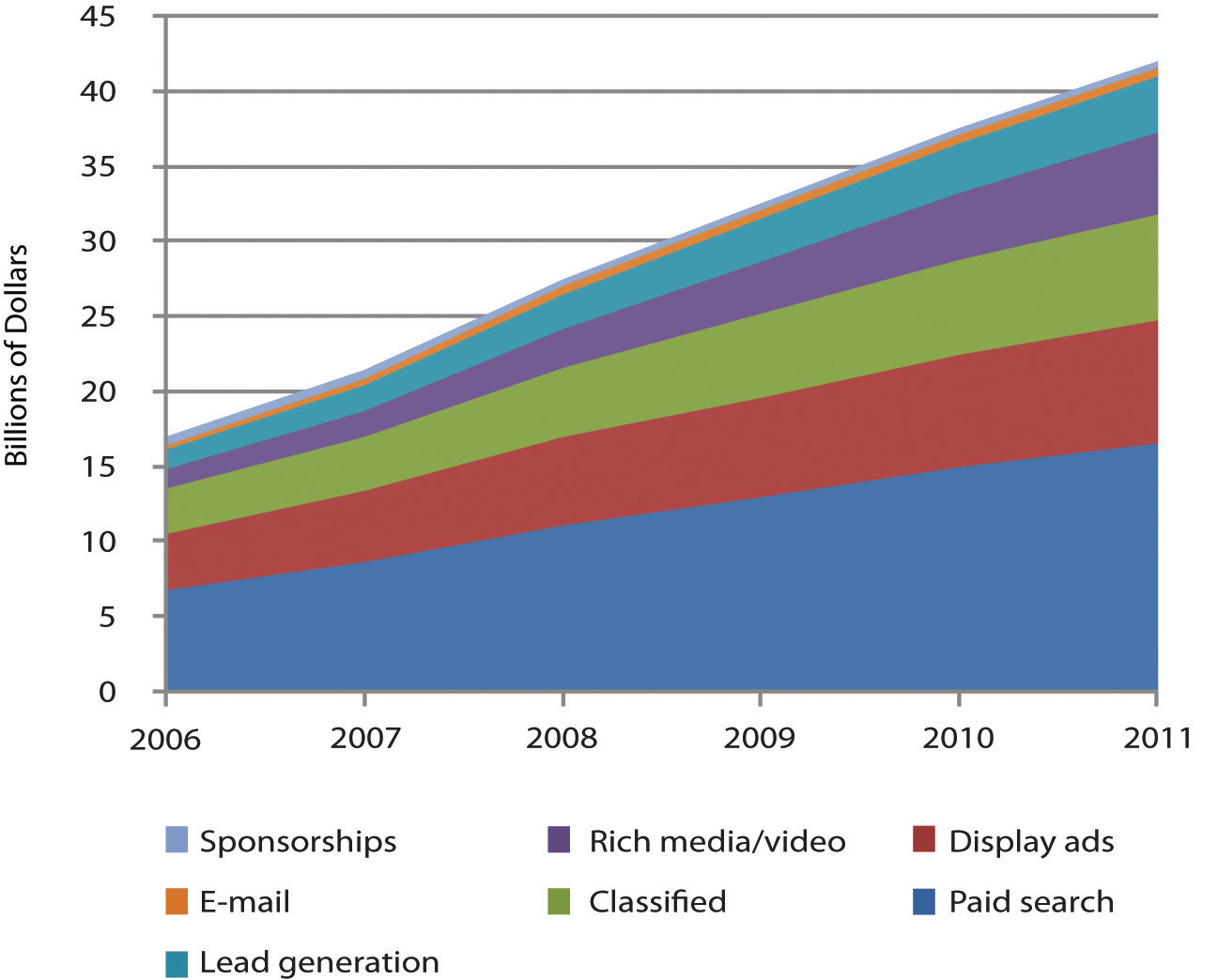 Search captures the most online ad dollars, and Google dominates search advertising. Figures for 2009 and beyond are estimates.

As more people spend more time online, advertisers are shifting spending away from old channels to the Internet; and Google is swallowing the lion’s share of this funds transfer (Pontin, 2009). By some estimates Google has 76 percent of the search advertising business (Sherman, 2009). Add to that Google’s lucrative AdSense network that serves ads to sites ranging from small time bloggers to the New York Times, plus markets served by Google’s acquisition of display ad leader DoubleClick, and the firm controls in the neighborhood of 70 percent of all online advertising dollars (Baker, 2008). Google has the world’s strongest brand (Rao, 2009) (its name is a verb—just Google it). It is regularly voted among the best firms to work for in America (twice topping Fortune’s list). While rivals continue to innovate (see Note 14.85 “Search: Google Rules, but It Ain’t Over”) through Q1 2009, Google continues to dominate the search market. 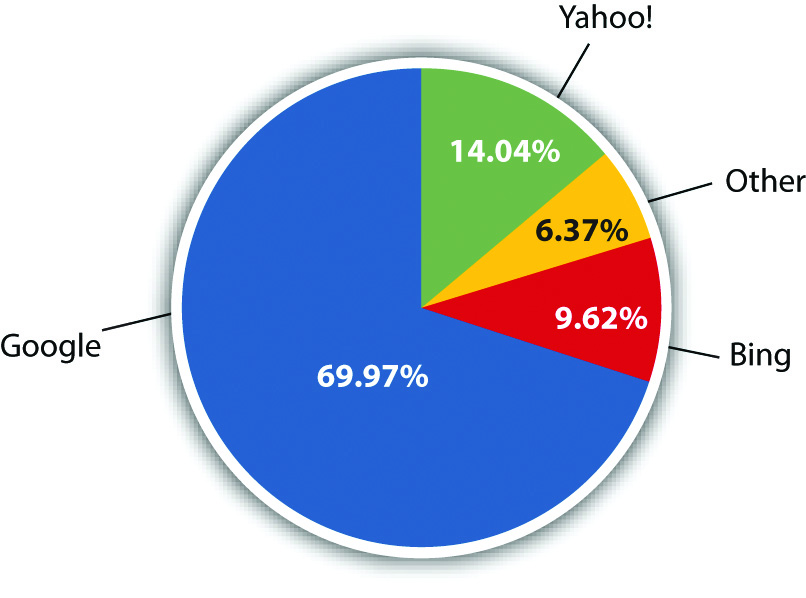 Wall Street has rewarded this success. The firm’s market capitalization (market cap), the value of the firm calculated by multiplying its share price by the number of shares, makes Google the most valuable media company on the planet. By early 2009, Google’s market cap was greater than that of News Corp (which includes Fox, MySpace, and the Wall Street Journal), Disney (including ABC, ESPN, theme parks, and Pixar), Time Warner (Fortune, Time, Sports Illustrated, CNN, and Warner Bros.), Viacom (MTV, VH1, and Nickelodeon), CBS, and the New York Times—combined! Not bad for a business started by two twenty-something computer science graduate students. By 2007 that duo, Sergey Brin and Larry Page, were billionaires, tying for fifth on the Forbes 400 list of wealthiest Americans.

Brin and Page have built a talent magnet. At the Googleplex, the firm’s Mountain View, California headquarters, geeks are lavished with perks that include on-site laundry, massage, carwash, bicycle repair, free haircuts, state of the art gyms, and Wi-Fi equipped shuttles that ferry employees between Silicon Valley and the San Francisco Bay area. The Googleplex is also pretty green. The facility gets 30 percent of its energy from solar cells, representing the largest corporate installation of its kind (Weldon, 2007).

The firm’s quirky tech-centric culture is evident everywhere. A T-Rex skeleton looms near the volleyball court. Hanging from the lobby ceiling is a replica of SpaceShipOne, the first commercial space vehicle. And visitors to the bathroom will find “testing on the toilet,” coding problems or other brainteasers to keep gray matter humming while seated on one of the firm’s $800 remote-controlled Japanese commodes. Staff also enjoy an A-list lecture series attracting luminaries ranging from celebrities to heads of state.

And of course there’s the food—all of it free. The firm’s founders felt that no employee should be more than 100 feet away from nourishment, and a tour around Google offices will find espresso bars, snack nooks, and fully stocked beverage refrigerators galore. There are eleven gourmet cafeterias on-site, the most famous being “Charlie’s Place,” first run by the former executive chef for the Grateful Dead.

CEO Eric Schmidt says the goal of all this is “to strip away everything that gets in our employees’ way” (Wolgemuth, 2008). And the perks, culture, and sense of mission have allowed the firm to assemble one of the most impressive rosters of technical talent anywhere. The Googleplex is like a well-fed Manhattan project, and employee ranks include a gaggle of geniuses that helped invent critical technologies such as the Macintosh user interface, the python programming language, the XML standard, and even the protocols that underlie the Internet itself.

Engineers find Google a particularly attractive place to work, in part due to a corporate policy of offering “20 percent time,” the ability to work the equivalent of one day a week on new projects that interest them. It’s a policy that has fueled innovation. Google Vice President Marissa Mayer (who herself regularly ranks among Fortune’s most powerful women in business) has stated that roughly half of Google products got their start in 20 percent time (Casnocha, 2009).

Casnocha, B., “Success on the Side,” The American: The Journal of the American Enterprise Institute, April 24, 2009.