The poor, ship-building town of La Coruña in northern Spain seems an unlikely home to a tech-charged innovator in the decidedly ungeeky fashion industry, but that’s where you’ll find “The Cube,” the gleaming, futuristic central command of the Inditex Corporation (Industrias de Diseño Textil), parent of game-changing clothes giant, Zara. The blend of technology-enabled strategy that Zara has unleashed seems to break all of the rules in the fashion industry. The firm shuns advertising and rarely runs sales. Also, in an industry where nearly every major player outsources manufacturing to low-cost countries, Zara is highly vertically integrated, keeping huge swaths of its production process in-house. These counterintuitive moves are part of a recipe for success that’s beating the pants off the competition, and it has turned the founder of Inditex, Amancio Ortega, into Spain’s wealthiest man and the world’s richest fashion executive. 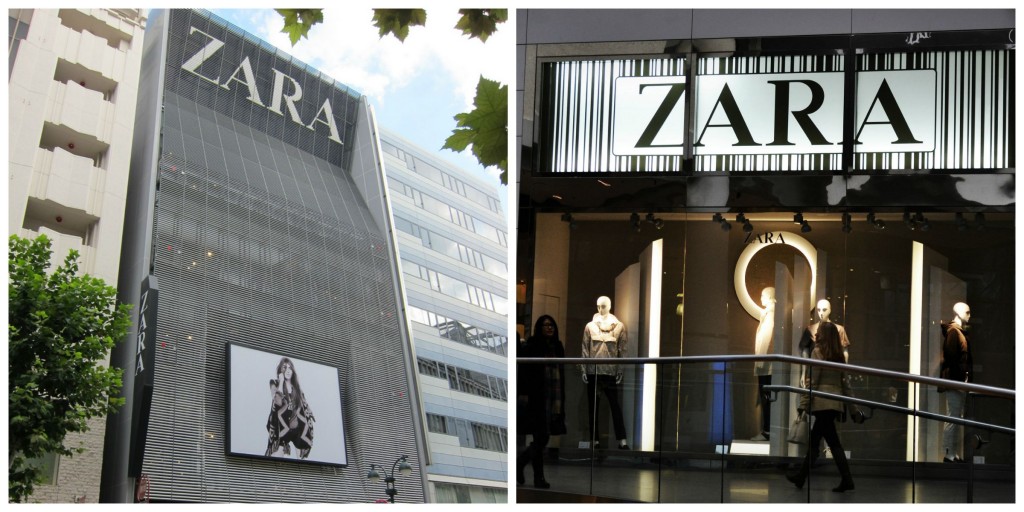 Zara’s operations are concentrated in Spain, but they have stores around the world like these in Tokyo and Canada.

The firm tripled in size between 1996 and 2000, then its earnings skyrocketed from $2.43 billion in 2001 to $13.6 billion in 2007. By August 2008, sales edged ahead of Gap, making Inditex the world’s largest fashion retailer (Hall, 2008).Table 3.1 “Gap versus Inditex at a Glance” compares the two fashion retailers. While Inditex supports eight brands, Zara is unquestionably the firm’s crown jewel and growth engine, accounting for roughly two-thirds of sales (Murphy, 2008).

Table 3.1 Gap versus Inditex at a Glance

While competitors falter, Zara is undergoing one of the fastest global expansions the fashion world has ever seen, opening one store per day and entering new markets worldwide—seventy-three countries so far. The chain’s profitability is among the highest in the industry (Sull & Turconi, 2008). The fashion director for luxury goods maker LVMH calls Zara “the most innovative and devastating retailer in the world” (Surowiecki, 2000).

Zara’s duds look like high fashion but are comparatively inexpensive (average item price is $27, although prices vary by country)(Rohwedder, 2009). A Goldman analyst has described the chain as “Armani at moderate prices,” while another industry observer suggests that while fashions are more “Banana Republic,” prices are more “Old Navy” (Folpe, 2000). Legions of fans eagerly await “Z-day,” the twice-weekly inventory delivery to each Zara location that brings in the latest clothing lines for women, men, and children.

In order to understand and appreciate just how counterintuitive and successful Zara’s strategy is, and how technology makes all of this possible, it’s important to first examine the conventional wisdom in apparel retail. To do that we’ll look at former industry leader—Gap.

Gap: An Icon in Crisis

Most fashion retailers place orders for a seasonal collection months before these lines make an appearance in stores. While overseas contract manufacturers may require hefty lead times, trying to guess what customers want months in advance is a tricky business. In retail in general and fashion in particular, there’s a saying: inventory equals death. Have too much unwanted product on hand and you’ll be forced to mark down or write off items, killing profits. For years, Gap sold most of what it carried in stores. Micky Drexler, a man with a radar-accurate sense of style and the iconic CEO who helped turn Gap’s button-down shirts and khakis into America’s business casual uniform, led the way. Drexler’s team had spot-on tastes throughout the 1990s, but when sales declined in the early part of the following decade, Drexler was left guessing on ways to revitalize the brand, and he guessed wrong—disastrously wrong. Chasing the youth market, Drexler filled Gap stores with miniskirts, low-rise jeans, and even a much-ridiculed line of purple leather pants (Boorstein, 2006). The throngs of teenagers he sought to attract never showed up, and the shift in offerings sent Gap’s mainstay customers to retailers that easily copied the styles that Gap had made classic.

The inventory hot potato Drexler was left with crushed the firm. Gap’s same-store sales declined for twenty-nine months straight. Profits vanished. Gap founder and chairman Dan Fisher lamented, “It took us thirty years to get to $1 billion in profits and two years to get to nothing” (Sellers, 2003). The firm’s debt was downgraded to junk status. Drexler was out and for its new head the board chose Paul Pressler, a Disney executive who ran theme parks and helped rescue the firm’s once ailing retail effort.

Pressler shut down hundreds of stores, but the hemorrhaging continued largely due to bad bets on colors and styles (Lee, 2007). During one holiday season, Gap’s clothes were deemed so off target that the firm scrapped its advertising campaign and wrote off much of the inventory. The marketing model used by Gap to draw customers in via big-budget television promotion had collapsed. Pressler’s tenure saw same-store sales decline in eighteen of twenty-four months (Boorstein, 2006). A Fortune article on Pressler’s leadership was titled “Fashion Victim.” BusinessWeek described his time as CEO as a “Total System Failure,” and Wall Street began referring to him as DMW for Dead Man Walking. In January 2007, Pressler resigned, with Gap hoping its third chief executive of the decade could right the ailing giant (Lee, 2007).

Conventional wisdom suggests that leveraging cheap contract manufacturing in developing countries can keep the cost of goods low. Firms can lower prices and sell more product or maintain higher profit margins—all good for the bottom line. But many firms have also experienced the ugly downside to this practice. Global competition among contract firms has led to race-to-the-bottom cost-cutting measures. Too often, this means that in order to have the low-cost bid, contract firms skimp on safety, ignore environmental concerns, employ child labor, and engage in other ghastly practices.

The apparel industry in particular has been plagued by accusations of employing sweatshop labor to keep costs down. Despite the fact that Gap audits contract manufacturers and has a high standard for partner conduct, the firm has repeatedly been taken to task by watchdog groups, the media, and its consumers, who have exposed unacceptable contract manufacturing conditions that Gap failed to catch. This negative exposure includes the October 2007 video showing Gap clothes made by New Delhi children as young as ten years old in what were described as “slave labor” conditions (Cho, 2007).

Gap is not alone; Nike, Wal-Mart, and many other apparel firms have been tarnished in similar incidents. Big firms are big targets and those that fail to adequately ensure their products are made under acceptable labor conditions risk a brand-damaging backlash that may turn off customers, repel new hires, and leave current staff feeling betrayed. Today’s manager needs to think deeply not only about their own firm’s ethical practices, but also those of all of their suppliers and partners.

The problem of sweatshop labor has plagued the clothing industry for years. Managers often feel the pressure to seek ever-lower costs and all too often end up choosing suppliers with unacceptably poor practices. Even well-meaning firms can find themselves stung by corner-cutting partners that hide practices from auditors or truck products in from unmonitored off-site locations. The results can be tragic for those exploited, and can carry lasting negative effects for the firm. The sweatshop moniker continues to dog Nike years after allegations were uncovered and the firm moved aggressively to deal with its problems.

Nike rival Reebok (now part of Adidas) has always taken working conditions seriously. The firm even has a Vice President of Human Rights and has made human dignity a key platform for its philanthropic efforts. Reebok invested millions in developing an in-house information system to track audits of its hundreds of suppliers along dimensions such as labor, safety, and environmental practices. The goal in part was to identify any bad apples, so that one division, sporting goods, for example, wouldn’t use a contractor identified as unacceptable by the sneaker line.

The data was valuable to Reebok, particularly given that the firm has hundreds of contract suppliers. But senior management realized the system would do even more good if the whole industry could share and contribute information. Reebok went on to donate the system and provided critical backing to help create the nonprofit organization Fair Factories Clearinghouse. With management that includes former lawyers for Amnesty International, Fair Factories (FairFactories.org) provides systems where apparel and other industries can share audit information on contract manufacturers. Launching the effort wasn’t as easy as sharing the technology. The U.S. Department of Justice needed to provide a special exemption, and had to be convinced the effort wouldn’t be used by buyers to collude and further squeeze prices from competitors (the system is free of pricing data).

Suppliers across industries now recognize that if they behave irresponsibly the Fair Factories system will carry a record of their misdeeds, notifying all members to avoid the firm. As more firms use the system, its database becomes broader and more valuable. To their credit, both Gap and Nike have joined the Fair Factories Clearinghouse.