The intersection where technology and business meet is both terrifying and exhilarating. But if you’re under the age of thirty, realize that this is your space. While the fortunes of any individual or firm rise and fall over time, it’s abundantly clear that many of the world’s most successful technology firms—organizations that have had tremendous impact on consumers and businesses across industries—were created by young people. Consider just a few:

Bill Gates was an undergraduate when he left college to found Microsoft—a firm that would eventually become the world’s largest software firm and catapult Gates to the top of the Forbes list of world’s wealthiest people (enabling him to also become the most generous philanthropist of our time). 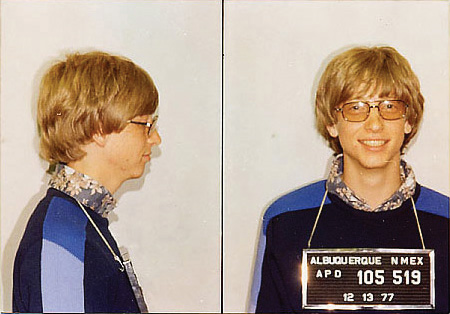 Young Bill Gates appears in a mug shot for a New Mexico traffic violation. Microsoft, now headquartered in Washington State, had its roots in New Mexico when Gates and partner Paul Allen moved there to be near early PC maker Altair.

Michael Dell was just a sophomore when he began building computers in his dorm room at the University of Texas. His firm would one day claim the top spot among PC manufacturers worldwide.

Steve Jobs was just twenty-one when he founded Apple.

Tony Hsieh proved his entrepreneurial chops when, at twenty-four, he sold LinkExchange to Microsoft for over a quarter of a billion dollars (Chafkin, 2009). He’d later serve as CEO of Zappos, eventually selling that firm to Amazon for $900 million (Lacy, 2009).

Sergey Brin and Larry Page were both twenty-something doctoral students at Stanford University when they founded Google. So were Jerry Yang and David Filo of Yahoo! All would become billionaires.

If you want to go a little older, Kevin Rose of Digg and Steve Chen and Chad Hurley of YouTube were all in their late twenties when they launched their firms. Jeff Bezos hadn’t yet reached thirty when he began working on what would eventually become Amazon.

Of course, those folks would seem downright ancient to Catherine Cook, who founded MyYearbook.com, a firm that at one point grew to become the third most popular social network in the United States. Cook started the firm when she was a sophomore—in high school.

But you don’t have to build a successful firm to have an impact as a tech revolutionary. Shawn Fanning’s Napster, widely criticized as a piracy playground, was written when he was just nineteen. Fanning’s code was the first significant salvo in the tech-fueled revolution that brought about an upending of the entire music industry. Finland’s Linus Torvals wrote the first version of the Linux operating system when he was just twenty-one. Today Linux has grown to be the most influential component of the open source arsenal, powering everything from cell phones to supercomputers.

BusinessWeek regularly runs a list of America’s Best Young Entrepreneurs—the top twenty-five aged twenty-five and under. Inc. magazine’s list of the Coolest Young Entrepreneurs is subtitled the “30 under 30” (Fenn, 2009). While not exclusively filled with the ranks of tech start-ups, both of these lists are nonetheless dominated with technology entrepreneurs. Whenever you see young people on the cover of a business magazine, it’s almost certainly because they’ve done something groundbreaking with technology. The generals and foot soldiers of the technology revolution are filled with the ranks of the young, some not even old enough to legally have a beer. For the old-timers reading this, all is not lost, but you’d best get cracking with technology, quick. Junior might be on the way to either eat your lunch or be your next boss.