The practice of running and optimizing search engine ad campaigns is referred to as search engine marketing (SEM) (Elliott, 2006). SEM is a hot topic in an increasingly influential field, so it’s worth spending some time learning how search advertising works on the Internet’s largest search engine.

Roughly two-thirds of Google’s revenues come from ads served on its own sites, and the vast majority of this revenue comes from search engine ads1. During Google’s early years, the firm actually resisted making money through ads. In fact, while at Stanford, Brin and Page even coauthored a paper titled “The Evils of Advertising” (Vise, 2008). But when Yahoo! and others balked at buying Google’s search technology (offered for as little as $500,000), Google needed to explore additional revenue streams. It wasn’t until two years after incorporation that Google ran ads alongside organic search results. That first ad, one for “Live Mail Order Lobsters,” appeared just minutes after the firm posted a link reading “See Your Ad Here”) (Levy, 2009).>

Google has only recently begun incorporating video and image ads into search. For the most part, the ads you’ll see to the right (and sometimes top) of Google’s organic search results appear as keyword advertising, meaning they’re targeted based on a user’s query. Advertisers bid on the keywords and phrases that they’d like to use to trigger the display of their ad. Linking ads to search was a brilliant move, since the user’s search term indicates an overt interest in a given topic. Want to sell hotel stays in Tahiti? Link your ads to the search term “Tahiti Vacation.”

Not only are search ads highly targeted, advertisers only pay for results. Text ads appearing on Google search pages are billed on a pay-per-click (PPC) basis, meaning that advertisers don’t spend a penny unless someone actually clicks on their ad. Note that the term pay-per-click is sometimes used interchangeably with the term cost-per-click (CPC).

If an advertiser wants to display an ad on Google search, they can set up a Google AdWords advertising account in minutes, specifying just a single ad, or multiple ad campaigns that trigger different ads for different keywords. Advertisers also specify what they’re willing to pay each time an ad is clicked, how much their overall ad budget is, and they can control additional parameters, such as the timing and duration of an ad campaign.

If no one clicks on an ad, Google doesn’t make money, advertisers don’t attract customers, and searchers aren’t seeing ads they’re interested in. So in order to create a winning scenario for everyone, Google has developed a precise ad ranking formula that rewards top performing ads by considering two metrics: the maximum CPC that an advertiser is willing to pay, and the advertisement’s quality score—a broad measure of ad performance. Create high quality ads and your advertisements might appear ahead of competition, even if your competitors bid more than you. But if ads perform poorly they’ll fall in rankings or even drop from display consideration.

Below is the formula used by Google to determine the rank order of sponsored links appearing on search results pages.

One factor that goes into determining an ad’s quality score is the click-through rate (CTR) for the ad, the number of users who clicked an ad divided by the number of times the ad was delivered (the impressions). The CTR measures the percentage of people who clicked on an ad to arrive at a destination-site. Also included in a quality score are the overall history of click performance for the keywords linked to the ad, the relevance of an ad’s text to the user’s query, and Google’s automated assessment of the user experience on the landing page—the Web site displayed when a user clicks on the ad. Ads that don’t get many clicks, ad descriptions that have nothing to do with query terms, and ads that direct users to generic pages that load slowly or aren’t strongly related to the keywords and descriptions used in an ad, will all lower an ad’s chance of being displayed2.

When an ad is clicked, advertisers don’t actually pay their maximum CPC; Google discounts ads to just one cent more than the minimum necessary to maintain an ad’s position on the page. So if you bid one dollar per click, but the ad ranked below you bids ninety cents, you’ll pay just ninety-one cents if the ad is clicked. Discounting was a brilliant move. No one wants to get caught excessively overbidding rivals, so discounting helps reduce the possibility of this so-called bidder’s remorse. And with this risk minimized, the system actually encouraged higher bids (Levy, 2009)!

Ad ranking and cost-per-click calculations take place as part of an automated auction that occurs every time a user conducts a search. Advertisers get a running total of ad performance statistics so that they can monitor the return on their investment and tweak promotional efforts for better results. And this whole system is automated for self-service—all it takes is a credit card, an ad idea, and you’re ready to go.

Google rakes in billions on what amounts to pocket change earned one click at a time. Most clicks bring in between thirty cents and one dollar. However, costs can vary widely depending on industry, current competition, and perceived customer value. Table 14.1 “10 Most Expensive Industries for Keyword Ads” shows some of the highest reported CPC rates. But remember, any values fluctuate in real time based on auction participants.

Since rates are based on auctions, top rates reflect what the market is willing to bear. As an example, law firms, which bring in big bucks from legal fees, decisions, and settlement payments often justify higher customer acquisition costs. And firms that see results will keep spending. Los Angeles–based Chase Law Group has said that it brings in roughly 60 percent of its clients through Internet advertising (Mann, 2006).

Geotargeting occurs when computer systems identify a user’s physical location (sometimes called the geolocation) for the purpose of delivering tailored ads or other content. On Google AdWords, for example, advertisers can specify that their ads only appear for Web surfers located in a particular country, state, metropolitan region, or a given distance around a precise locale. They can even draw a custom ad-targeting region on a map and tell Google to only show ads to users detected inside that space.

Ads in Google Search are geotargeted based on IP address. Every device connected to the Internet has a unique IP address assigned by the organization connecting the device to the network. Normally you don’t see your IP address (a set of four numbers, from 0 to 255, separated by periods; e.g., 136.167.2.220). But the range of IP addresses “owned” by major organizations and Internet service providers (ISPs) is public knowledge. In many cases it’s possible to make an accurate guess as to where a computer, laptop, or mobile phone is located simply by cross-referencing a device’s current IP address with this public list.

For example, it’s known that all devices connected to the Boston College network contain IP addresses starting with the numbers 136.167. If a search engine detects a query coming from an IP address that begins with those two numbers, it can be fairly certain that the person using that device is in the greater Boston area. 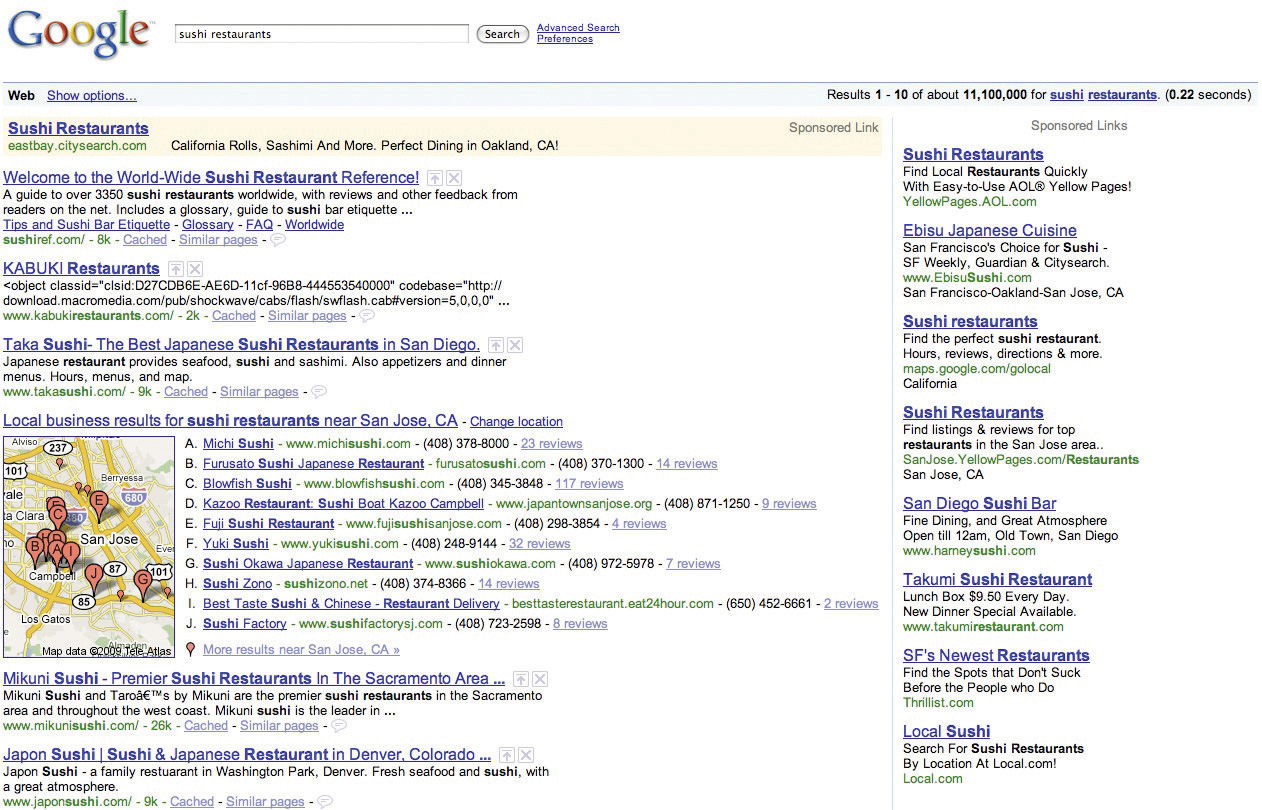 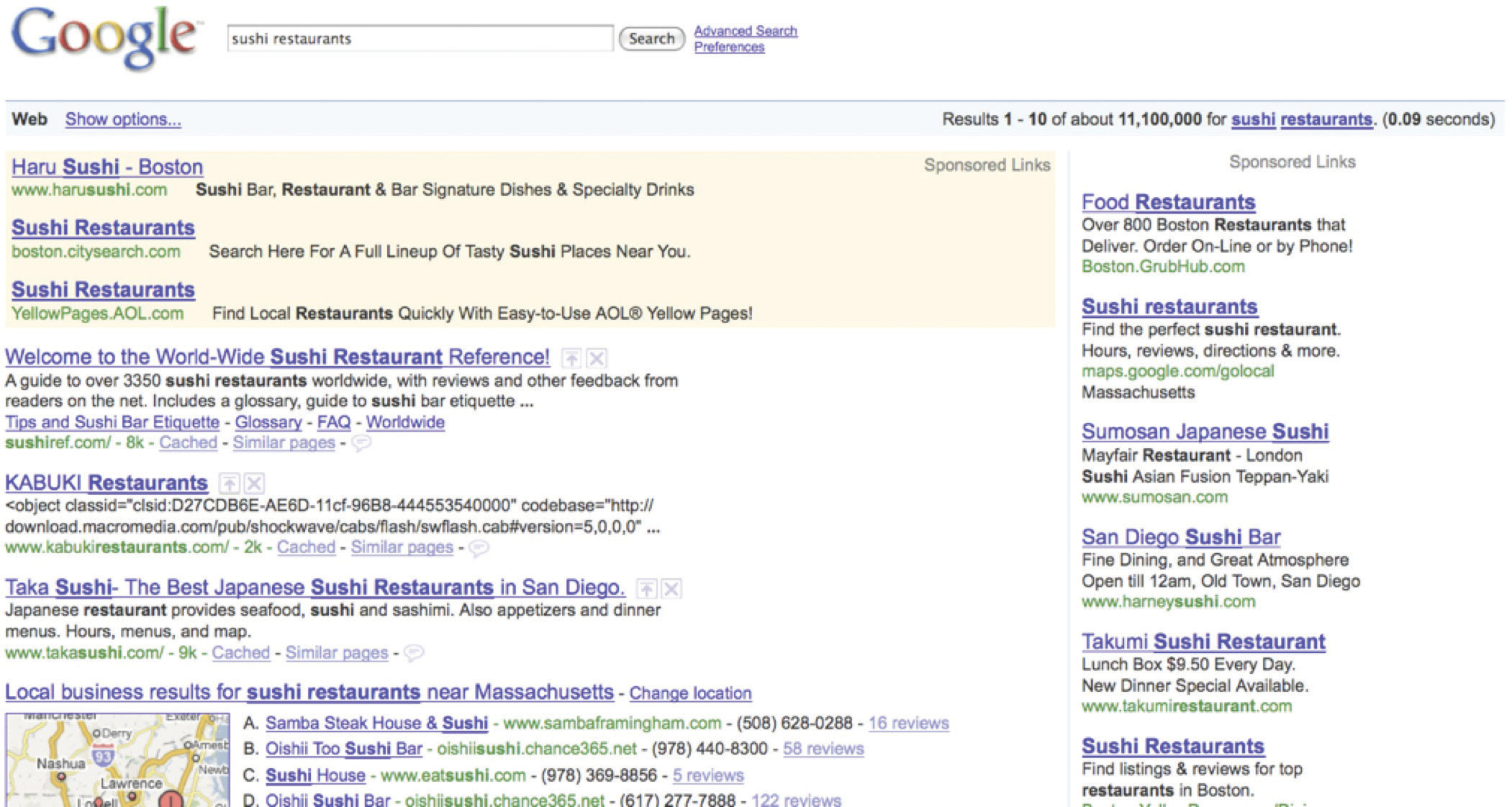 In this geotargeting example, the same search term is used at roughly the same time on separate computers located in Silicon Valley area (top) and Boston (bottom). Note how geotargeting impacts results.

IP addresses will change depending on how and where you connect to the Internet. Connect your laptop to a hotel’s Wi-Fi when visiting a new city, and you’re likely to see ads specific to that location. That’s because your Internet service provider has changed, and the firm serving your ads has detected that you are using an IP address known to be associated with your new location.

Geotargeting via IP address is fairly accurate, but it’s not perfect. For example, some Internet service providers may provide imprecise or inaccurate information on the location of their networks. Others might be so vague that it’s difficult to make a best guess at the geography behind a set of numbers (values assigned by a multinational corporation with many locations, for example). And there are other ways locations are hidden, such as when Internet users connect to proxy servers, third-party computers that pass traffic to and from a specific address without revealing the address of the connected users.

While every operating system has a control panel or command that you can use to find your current IP address, there are also several Web sites that will quickly return this value (and a best guess at your current location). One such site is http://ip-adress.com (note the spelling has only one “d”). Visit this or a similar site with a desktop, laptop, and mobile phone. Do the results differ and are they accurate? Why?

Geotargeting Evolves Beyond the IP Address

There are several other methods of geotargeting. Firms like Skyhook Wireless can identify a location based on its own map of Wi-Fi hotspots and nearby cell towers. Many mobile devices come equipped with global positioning system (GPS) chips (identifying location via the GPS satellite network). And if a user provides location values such as a home address or zip code to a Web site, then that value might be stored and used again to make a future guess at a user’s location.