If open source isn’t enough of a threat to firms that sell packaged software, a new generation of products, collectively known as SaaS, claims that you can now get the bulk of your computing done through your Web browser. Don’t install software—let someone else run it for you and deliver the results over the Internet.

Software as a service (SaaS) refers to software that is made available by a third party online. You might also see the terms ASP (application service provider) or HSV (hosted software vendor) used to identify this type of offering. SaaS is potentially a very big deal. Firms using SaaS products can dramatically lower several costs associated with the care and feeding of their information systems, including software licenses, server hardware, system maintenance, and IT staff. Most SaaS firms earn money via a usage-based pricing model akin to a monthly subscription. Others offer free services that are supported by advertising, while others promote the sale of upgraded or premium versions for additional fees.

Make no mistake, SaaS is yet another direct assault on traditional software firms. The most iconic SaaS firm is Salesforce.com, an enterprise customer relationship management (CRM) provider. This “un-software” company even sports a logo featuring the word “software” crossed out, Ghostbusters-style (Hempel, 2009).

The antisoftware message is evident in the logo of SaaS leader Salesforce.com.

Other enterprise-focused SaaS firms compete directly with the biggest names in software. Some of these upstarts are even backed by leading enterprise software executives. Examples include NetSuite (funded in part by Oracle’s Larry Ellison—the guy’s all over this chapter), which offers a comprehensive SaaS ERP suite; and Workday (launched by founders of Peoplesoft), which has SaaS offerings for managing human resources. Several traditional software firms have countered start-ups by offering SaaS efforts of their own. IBM offers a SaaS version of its Cognos business intelligence products, Oracle offers CRM On Demand, and SAP’s Business ByDesign includes a full suite of enterprise SaaS offerings. Even Microsoft has gone SaaS, with a variety of Web-based services that include CRM, Web meeting tools, collaboration, e-mail, and calendaring.

SaaS is also taking on desktop applications. Intuit has online versions of its QuickBooks, TurboTax, and Quicken finance software. Adobe has an online version of Photoshop. Google and Zoho offer office suites that compete with desktop alternatives, prompting Microsoft’s own introduction of an online version of Office. And if you store photos on Flickr or Picassa instead of your PC’s hard drive, then you’re using SaaS, too. 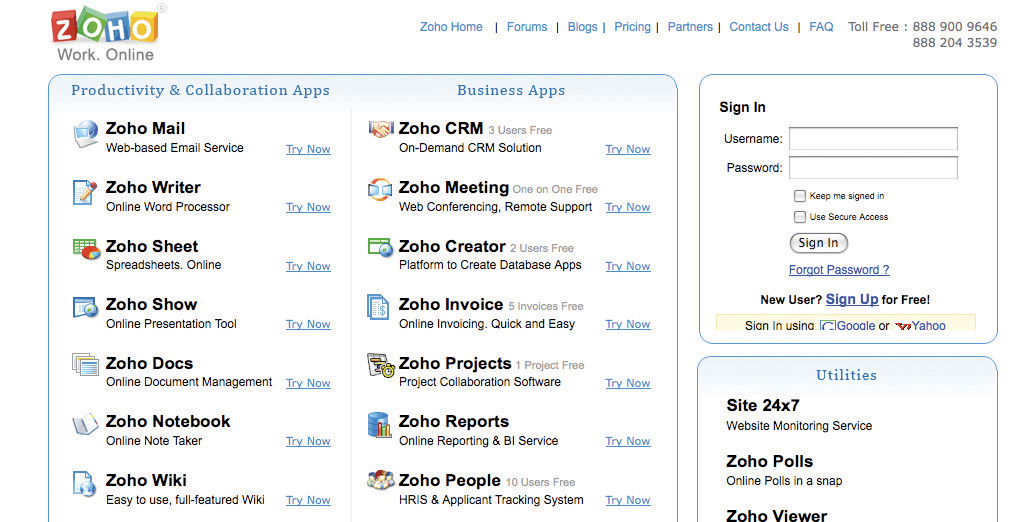 A look at Zoho’s home page shows the diversity of both desktop and enterprise offerings from this SaaS upstart. Note that the firm makes it services available through browsers, phones, and even Facebook.

The Benefits of SaaS

Firms can potentially save big using SaaS. Organizations that adopt SaaS forgo the large upfront costs of buying and installing software packages. For large enterprises, the cost to license, install, and configure products like ERP and CRM systems can easily run into the hundreds of thousands or even millions of dollars. And these costs are rarely a one time fee. Additional costs like annual maintenance contracts have also been rising as rivals fail or get bought up. Less competition among traditional firms recently allowed Oracle and SAP to raise maintenance fees to as much as 20 percent (Lacy, 2008).

Firms that adopt SaaS don’t just save on software and hardware, either. There’s also the added cost for the IT staff needed to run these systems. Forrester Research estimates that SaaS can bring cost savings of 25 to 60 percent if all these costs are factored in (Quittner, 2008).

There are also accounting and corporate finance implications for SaaS. Firms that adopt software as a service never actually buy a system’s software and hardware, so these systems become a variable operating expense. This flexibility helps mitigate the financial risks associated with making a large capital investment in information systems. For example, if a firm pays Salesforce.com sixty-five dollars per month per user for its CRM software, it can reduce payments during a slow season with a smaller staff, or pay more during heavy months when a firm might employ temporary workers. At these rates, SaaS not only looks good to large firms, it makes very sophisticated technology available to smaller firms that otherwise wouldn’t be able to afford expensive systems, let alone the IT staff and hardware required to run them.

In addition to cost benefits, SaaS offerings also provide the advantage of being highly scalable. This feature is important because many organizations operate in environments prone to wide variance in usage. Some firms might expect systems to be particularly busy during tax time or the period around quarterly financial reporting deadlines, while others might have their heaviest system loads around a holiday season. A music label might see spikes when an artist drops a new album. Using conventional software, an organization would have to buy enough computing capacity to ensure that it could handle its heaviest anticipated workload. But sometimes these loads are difficult to predict, and if the difference between high workloads and average use is great, a lot of that expensive computer hardware will spend most of its time doing nothing. In SaaS, however, the vendor is responsible for ensuring that systems meet demand fluctuation. Vendors frequently sign a service level agreement (SLA) with their customers to ensure a guaranteed uptime and define their ability to meet demand spikes.

When looking at the benefits of SaaS, also consider the potential for higher quality and service levels. SaaS firms benefit from economies of scale that not only lower software and hardware costs, but also potentially boost quality. The volume of customers and diversity of their experiences means that an established SaaS vendor is most likely an expert in dealing with all sorts of critical computing issues. SaaS firms handle backups, instantly deploy upgrades and bug fixes, and deal with the continual burden of security maintenance—all costly tasks that must be performed regularly and with care, although each offers little strategic value to firms that perform these functions themselves in-house. The breadth of a SaaS vendor’s customer base typically pushes the firm to evaluate and address new technologies as they emerge, like quickly offering accessibility from mobile platforms like the BlackBerry and iPhone. For all but the savviest of IT shops, an established SaaS vendor can likely leverage its scale and experience to provide better, cheaper, more reliable standard information systems than individual companies typically can.

Software developers who choose to operate as SaaS providers also realize benefits. While a packaged software company like SAP must support multiple versions of its software to accommodate operating systems like Windows, Linux, and various flavors of Unix, an SaaS provider develops, tests, deploys, and supports just one version of the software executing on its own servers.

An argument might also be made that SaaS vendors are more attuned to customer needs. Since SaaS firms run a customer’s systems on their own hardware, they have a tighter feedback loop in understanding how products are used (and why they fail)—potentially accelerating their ability to enhance their offerings. And once made, enhancements or fixes are immediately available to customers the next time they log in.

SaaS applications also impact distribution costs and capacity. As much as 30 percent of the price of traditional desktop software is tied to the cost of distribution—pressing CD-ROMs, packaging them in boxes, and shipping them to retail outlets (Drummond, 2001). Going direct to consumers can cut out the middleman, so vendors can charge less or capture profits that they might otherwise share with a store or other distributor. Going direct also means that SaaS applications are available anywhere someone has an Internet connection, making them truly global applications. This feature has allowed many SaaS firms to address highly specialized markets (sometimes called vertical niches). For example, the Internet allows a company writing specialized legal software, for example, or a custom package for the pharmaceutical industry, to have a national deployment footprint from day one. Vendors of desktop applications that go SaaS benefit from this kind of distribution, too.

Finally, SaaS allows a vendor to counter the vexing and costly problem of software piracy. It’s just about impossible to make an executable, illegal copy of a subscription service that runs on a SaaS provider’s hardware.

Gaming in Flux: Is There a Future in Free?

PC game makers are in a particularly tough spot. Development costs are growing as games become more sophisticated. But profits are plummeting as firms face rampant piracy, a growing market for used game sales, and lower sales from rental options from firms like Blockbuster and GameFly. To combat these trends, Electronic Arts (EA) has begun to experiment with a radical alternative to PC game sales—give the base version of the product away for free and make money by selling additional features.

The firm started with the Korean version of its popular FIFA soccer game. Koreans are crazy for the world’s most popular sport; their nation even cohosted the World Cup in 2002. But piracy was killing EA’s sales in Korea. To combat the problem, EA created a free, online version of FIFA that let fans pay for additional features and upgrades, such as new uniforms for their virtual teams, or performance-enhancing add-ons. Each enhancement only costs about one dollar and fifty cents, but the move to a model based on these so-called microtransactions has brought in big earnings. During the first two years that the microtransaction-based Korean FIFA game was available, EA raked in roughly $1 million a month. The two-year, twenty-four-million-dollar take was twice the sales record for EA’s original FIFA game.

Asian markets have been particularly receptive to microtransactions—this revenue model makes up a whopping 50 percent of the region’s gaming revenues. But whether this model can spread to other parts of the world remains to be seen. The firm’s first free, microtransaction offering outside of Korea leverages EA’s popular Battlefield franchise. Battlefield Heroes sports lower quality, more cartoon-like graphics than EA’s conventional Battlefield offerings, but it will be offered free online. Lest someone think they can rise to the top of player rankings by buying the best military hardware for their virtual armies, EA offers a sophisticated matching engine, pitting players with similar abilities and add-ons against one another (Schenker, 2008).

Players of the first versions of Battlefield Heroes and FIFA Online needed to download software to their PC. But the start-up World Golf Tour shows how increasingly sophisticated games can execute within a browser, SaaS-style. WGT doesn’t have quite the graphics sophistication of the dominant desktop golf game (EA’s Tiger Woods PGA Golf), but the free, ad-supported offering is surprisingly detailed. Buddies can meet up online for a virtual foursome, played on high-resolution representations of the world’s elite courses stitched together from fly-over photographs taken as part of game development. World Golf Tour is ad-supported. The firm hopes that advertisers will covet access to the high-income office workers likely to favor a quick virtual golf game to break up their workday. Zynga’s FarmVille, an app game for Facebook, combines both models. Free online, but offering added features purchased in micropayment-sized chunks, FarmVille made half a million dollars in three days, just by selling five-dollar virtual sweet potatoes (MacMillan, et. al., 2009). FIFA Online, Battlefield Heroes, World Golf Tour, and FarmVille all show that the conventional models of gaming software are just as much in flux as those facing business and productivity packages.