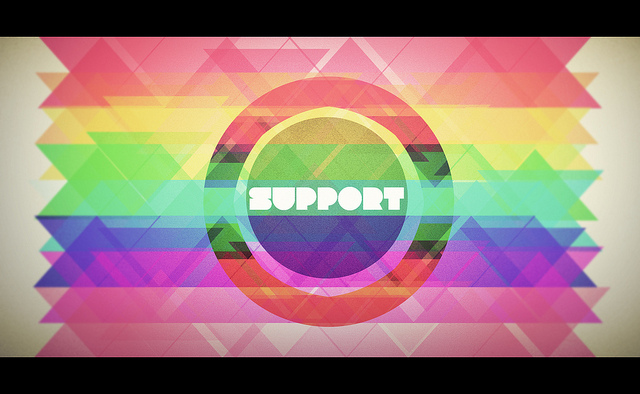 In public speaking, the word “support” refers to a range of strategies that are used to develop the central idea and specific purpose by providing corroborating evidence. Whether you are speaking to inform, persuade, or entertain, using support helps you create a more substantive and polished speech. We sometimes use the words “support” or “evidence” synonymously or interchangeably because both are designed to help ground a speech’s specific purpose. However, “evidence” tends to be associated specifically with persuasive speeches, so we opt to use the more general term “support” for most of this chapter. In this section, we are going to explore why speakers use support.

Why We Use Support

Speakers use support to help provide a foundation for their message. You can think of support as the legs on a table. Without the legs, the table becomes a slab of wood or glass lying on the ground; as such, it cannot fully serve the purpose of a table. In the same way, without support, a speech is nothing more than fluff. Audience members may ignore the speech’s message, dismissing it as just so much hot air. In addition to being the foundation that a speech stands on, support also helps us clarify content, increase speaker credibility, and make the speech more vivid.

The first reason to use support in a speech is to clarify content. Speakers often choose a piece of support because a previous writer or speaker has phrased something in a way that evokes a clear mental picture of the point they want to make. For example, suppose you’re preparing a speech about hazing in college fraternities. You may read your school’s code of student conduct to find out how your campus defines hazing. You could use this definition to make sure your audience understands what hazing is and what types of behaviors your campus identifies as hazing.

Another important reason to use support is because it adds to your credibility as a speaker. The less an audience perceives you as an expert on a given topic, the more important it is to use a range of support. By doing so, you let your audience know that you’ve done your homework on the topic.

At the same time, you could hurt your credibility if you use inadequate support or support from questionable sources. Your credibility will also suffer if you distort the intent of a source to try to force it to support a point that the previous author did not address. For example, the famous 1798 publication by Thomas Malthus, An Essay on the Principle of Population, has been used as support for various arguments far beyond what Malthus could have intended. Malthus’s thesis was that as the human population increases at a greater rate than food production, societies will go to war over scarce food resources (Malthus, 1798). Some modern writers have suggested that, according to the Malthusian line of thinking, almost anything that leads to a food shortage could lead to nuclear war. For example, better health care leads to longer life spans, which leads to an increased need for food, leading to food shortages, which lead to nuclear war. Clearly, this argument makes some giant leaps of logic that would be hard for an audience to accept.

For this reason, it is important to evaluate your support to ensure that it will not detract from your credibility as a speaker. Here are four characteristics to evaluate when looking at support options: accuracy, authority, currency, and objectivity.

One of the quickest ways to lose credibility in the eyes of your audience is to use support that is inaccurate or even questionably accurate. Admittedly, determining the accuracy of support can be difficult if you are not an expert in a given area, but here are some questions to ask yourself to help assess a source’s accuracy:

One of this book’s authors recently observed a speech in which a student said, “The amount of pollution produced by using paper towels instead of hand dryers is equivalent to driving a car from the east coast to St. Louis.” The other students in the class, as well as the instructor, recognized that this information sounded wrong and asked questions about the information source, the amount of time it would take to produce this much pollution, and the number of hand dryers used. The audience demonstrated strong listening skills by questioning the information, but the speaker lost credibility by being unable to answer their questions.

The second way to use support in building your credibility is to cite authoritative sources—those who are experts on the topic. In today’s world, there are all kinds of people who call themselves “experts” on a range of topics. There are even books that tell you how to get people to regard you as an expert in a given industry (Lizotte, 2007). Today there are “experts” on every street corner or website spouting off information that some listeners will view as legitimate.

As a novice researcher, how can you determine whether an individual is truly an expert? Unfortunately, there is no clear-cut way to wade through the masses of “experts” and determine each one’s legitimacy quickly. However, Table 8.1 “Who Is an Expert?” presents a list of questions based on the research of Marie-Line Germain that you can ask yourself to help determine whether someone is an expert (Germain, 2006).

You don’t have to answer “yes” to all the preceding questions to conclude that a source is credible, but a string of “no” answers should be a warning signal. In a Columbia Journalism Review article, Allisa Quart raised the question of expert credibility regarding the sensitive subject of autism. Specifically, Quart questioned whether the celebrity spokesperson and autism advocate Jennifer McCarthy (http://www.generationrescue.org/) qualifies as an expert. Quart notes that McCarthy “insists that vaccines caused her son’s neurological disorder, a claim that has near-zero support in scientific literature” (Quart, 2010). Providing an opposing view is a widely read blog called Respectful Insolence (http://scienceblogs.com/insolence/), whose author is allegedly a surgeon/scientist who often speaks out about autism and “antivaccination lunacy.” Respectful Insolence received the 2008 Best Weblog Award from MedGagdet: The Internet Journal of Emerging Medical Technologies. We used the word “allegedly” when referring to the author of Respectful Insolence because as the website explains that the author’s name, Orac, is the “nom de blog of a (not so) humble pseudonymous surgeon/scientist with an ego just big enough to delude himself that someone, somewhere might actually give a rodent’s posterior about his miscellaneous verbal meanderings, but just barely small enough to admit to himself that few will” (ScienceBlogs LLC).

When comparing the celebrity Jenny McCarthy to the blogger Orac, who do you think is the better expert? Were you able to answer “yes” to the questions in Table 8.1 “Who Is an Expert?” for both “experts”? If not, why not? Overall, determining the authority of support is clearly a complicated task, and one that you should spend time thinking about as you prepare the support for your speech.

The third consideration in using support to build your credibility is how current the information is. Some ideas stay fairly consistent over time, like the date of the Japanese attack on Pearl Harbor or the mathematical formula for finding the area of a circle, but other ideas change wildly in a short period of time, including ideas about technology, health treatments, and laws.

Although we never want to discount classic supporting information that has withstood the test of time, as a general rule for most topics, we recommend that information be less than five years old. Obviously, this is just a general guideline and can change depending on the topic. If you’re giving a speech on the history of mining in West Virginia, then you may use support from sources that are much older. However, if you’re discussing a medical topic, then your support information should probably be from the past five years or less. Some industries change even faster, so the best support may come from the past month. For example, if are speaking about advances in word processing, using information about Microsoft Word from 2003 would be woefully out-of-date because two upgrades have been released since 2003 (2007 and 2010). As a credible speaker, it is your responsibility to give your audience up-to-date information.

The last question you should ask yourself when examining support is whether the person or organization behind the information is objective or biased. Bias refers to a predisposition or preconception of a topic that prevents impartiality. Although there is a certain logic to the view that every one of us is innately biased, as a credible speaker, you want to avoid just passing along someone’s unfounded bias in your speech. Ideally you would use support that is unbiased; Table 8.2 “Is a Potential Source of Support Biased?” provides some questions to ask yourself when evaluating a potential piece of support to detect bias.

Table 8.2 Is a Potential Source of Support Biased?

As with the questions in Table 8.1 “Who Is an Expert?” about expertise, you don’t have to have all “no” or “yes” responses to decide on bias. However, being aware of the possibility of bias and where your audience might see bias will help you to select the best possible support to include in your speech.

In addition to clarifying content and enhancing credibility, support helps make a speech more vivid. Vividness refers to a speaker’s ability to present information in a striking, exciting manner. The goal of vividness is to make your speech more memorable. One of the authors still remembers a vivid example from a student speech given several years ago. The student was speaking about the importance of wearing seat belts and stated that the impact from hitting a windshield at just twenty miles per hour without a seat belt would be equivalent to falling out of the window of their second-floor classroom and landing face-first on the pavement below. Because they were in that classroom several times each week, students were easily able to visualize the speaker’s analogy and it was successful at creating an image that is remembered years later. Support helps make your speech more interesting and memorable to an audience member.

Malthus, T. R. (1798). An essay on the principle of population as it affects the future improvement of society, with remarks on the speculations of Mr. Godwin, M. Condorcet, and other writers. London, England: J. Johnson, in St. Paul’s Churchyard.

Quart, A. (2010, July/August). The trouble with experts: The web allows us to question authority in new ways. Columbia Journalism Review. Retrieved from http://www.cjr.org.