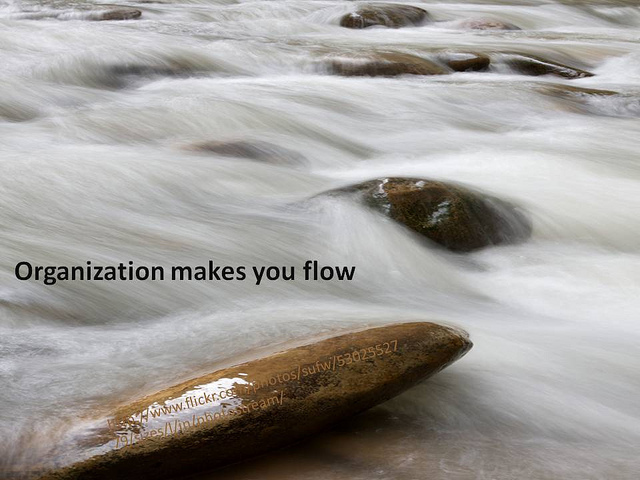 Previously in this chapter we discussed how to make your main points flow logically. This section is going to provide you with a number of organization patterns to help you create a logically organized speech. The first organization pattern we’ll discuss is categorical/topical.

By far the most common pattern for organizing a speech is by categories or topics. The categories function as a way to help the speaker organize the message in a consistent fashion. The goal of a categorical/topical speech pattern is to create categories (or chunks) of information that go together to help support your original specific purpose. Let’s look at an example.

In this case, we have a speaker trying to persuade a group of high school juniors to apply to attend Generic University. To persuade this group, the speaker has divided the information into three basic categories: what it’s like to live in the dorms, what classes are like, and what life is like on campus. Almost anyone could take this basic speech and specifically tailor the speech to fit her or his own university or college. The main points in this example could be rearranged and the organizational pattern would still be effective because there is no inherent logic to the sequence of points. Let’s look at a second example.

Another method for organizing main points is the comparison/contrast speech pattern. While this pattern clearly lends itself easily to two main points, you can also create a third point by giving basic information about what is being compared and what is being contrasted. Let’s look at two examples; the first one will be a two-point example and the second a three-point example.

The spatial speech pattern organizes information according to how things fit together in physical space. This pattern is best used when your main points are oriented to different locations that can exist independently. The basic reason to choose this format is to show that the main points have clear locations. We’ll look at two examples here, one involving physical geography and one involving a different spatial order.

If you look at a basic map of the United States, you’ll notice that these groupings of states were created because of their geographic location to one another. In essence, the states create three spatial territories to explain.

Now let’s look at a spatial speech unrelated to geography.

In this example, we still have three basic spatial areas. If you look at a model of the urinary system, the first step is the kidney, which then takes waste through the ureters to the bladder, which then relies on the sphincter muscle to excrete waste through the urethra. All we’ve done in this example is create a spatial speech order for discussing how waste is removed from the human body through the urinary system. It is spatial because the organization pattern is determined by the physical location of each body part in relation to the others discussed.

The chronological speech pattern places the main idea in the time order in which items appear—whether backward or forward. Here’s a simple example.

In this example, we’re looking at the writings of Winston Churchill in relation to World War II (before, during, and after). By placing his writings into these three categories, we develop a system for understanding this material based on Churchill’s own life. Note that you could also use reverse chronological order and start with Churchill’s writings after World War II, progressing backward to his earliest writings.

As you might guess, the biographical speech pattern is generally used when a speaker wants to describe a person’s life—either a speaker’s own life, the life of someone they know personally, or the life of a famous person. By the nature of this speech organizational pattern, these speeches tend to be informative or entertaining; they are usually not persuasive. Let’s look at an example.

In this example, we see how Brian Warner, through three major periods of his life, ultimately became the musician known as Marilyn Manson.

The causal speech pattern is used to explain cause-and-effect relationships. When you use a causal speech pattern, your speech will have two basic main points: cause and effect. In the first main point, typically you will talk about the causes of a phenomenon, and in the second main point you will then show how the causes lead to either a specific effect or a small set of effects. Let’s look at an example.

In this case, the first main point is about the history and prevalence of drinking alcohol among Native Americans (the cause). The second point then examines the effects of Native American alcohol consumption and how it differs from other population groups.

However, a causal organizational pattern can also begin with an effect and then explore one or more causes. In the following example, the effect is the number of arrests for domestic violence.

In this example, the possible causes for the difference might include stricter law enforcement, greater likelihood of neighbors reporting an incident, and police training that emphasizes arrests as opposed to other outcomes. Examining these possible causes may suggest that despite the arrest statistic, the actual number of domestic violence incidents in your city may not be greater than in other cities of similar size.

Another format for organizing distinct main points in a clear manner is the problem-cause-solution speech pattern. In this format you describe a problem, identify what you believe is causing the problem, and then recommend a solution to correct the problem.

In this speech, the speaker wants to persuade people to pass a new curfew for people under eighteen. To help persuade the civic group members, the speaker first shows that vandalism and violence are problems in the community. Once the speaker has shown the problem, the speaker then explains to the audience that the cause of this problem is youth outside after 10:00 p.m. Lastly, the speaker provides the mandatory 10:00 p.m. curfew as a solution to the vandalism and violence problem within the community. The problem-cause-solution format for speeches generally lends itself to persuasive topics because the speaker is asking an audience to believe in and adopt a specific solution.

A further way to organize your main ideas within a speech is through a psychological speech pattern in which “a” leads to “b” and “b” leads to “c.” This speech format is designed to follow a logical argument, so this format lends itself to persuasive speeches very easily. Let’s look at an example.

In this speech, the speaker starts by discussing how humor affects the body. If a patient is exposed to humor (a), then the patient’s body actually physiologically responds in ways that help healing (b—e.g., reduces stress, decreases blood pressure, bolsters one’s immune system, etc.). Because of these benefits, nurses should engage in humor use that helps with healing (c).

Each of the preceding organizational patterns is potentially useful for organizing the main points of your speech. However, not all organizational patterns work for all speeches. For example, as we mentioned earlier, the biographical pattern is useful when you are telling the story of someone’s life. Some other patterns, particularly comparison/contrast, problem-cause-solution, and psychological, are well suited for persuasive speaking. Your challenge is to choose the best pattern for the particular speech you are giving.

You will want to be aware that it is also possible to combine two or more organizational patterns to meet the goals of a specific speech. For example, you might wish to discuss a problem and then compare/contrast several different possible solutions for the audience. Such a speech would thus be combining elements of the comparison/contrast and problem-cause-solution patterns. When considering which organizational pattern to use, you need to keep in mind your specific purpose as well as your audience and the actual speech material itself to decide which pattern you think will work best.