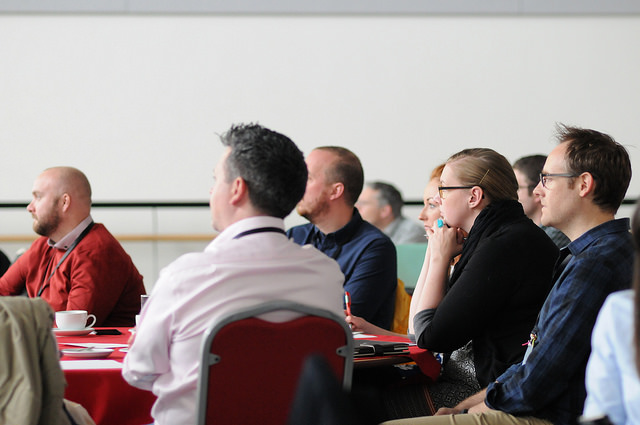 Previously in this text we discussed general guidelines for organizing speeches. In this section, we are going to look at three organizational patterns ideally suited for persuasive speeches: Monroe’s motivated sequence, problem-cause-solution, and comparative advantages.

Table 17.1 “Monroe’s Motivated Sequence” lists the basic steps of Monroe’s motivated sequence and the subsequent reaction a speaker desires from his or her audience.

The first step in Monroe’s motivated sequence is the attention step, in which a speaker attempts to get the audience’s attention. To gain an audience’s attention, we recommend that you think through three specific parts of the attention step. First, you need to have a strong attention-getting device. As previously discussed in Chapter 9 “Introductions Matter: How to Begin a Speech Effectively”, a strong attention getter at the beginning of your speech is very important. Second, you need to make sure you introduce your topic clearly. If your audience doesn’t know what your topic is quickly, they are more likely to stop listening. Lastly, you need to explain to your audience why they should care about your topic.

In the third step of Monroe’s motivated sequence, the satisfaction step, the speaker sets out to satisfy the need or solve the problem. Within this step, Monroe (1935) proposed a five-step plan for satisfying a need:

First, you need to clearly state the attitude, value, belief, or action you want your audience to accept. The purpose of this statement is to clearly tell your audience what your ultimate goal is.

The next step of Monroe’s motivated sequence is the visualization step, in which you ask the audience to visualize a future where the need has been met or the problem solved. In essence, the visualization stage is where a speaker can show the audience why accepting a specific attitude, value, belief, or behavior can positively affect the future. When helping people to picture the future, the more concrete your visualization is, the easier it will be for your audience to see the possible future and be persuaded by it. You also need to make sure that you clearly show how accepting your solution will directly benefit your audience.

According to Monroe, visualization can be conducted in one of three ways: positive, negative, or contrast (Monroe, 1935). The positive method of visualization is where a speaker shows how adopting a proposal leads to a better future (e.g., recycle, and we’ll have a cleaner and safer planet). Conversely, the negative method of visualization is where a speaker shows how not adopting the proposal will lead to a worse future (e.g., don’t recycle, and our world will become polluted and uninhabitable). Monroe also acknowledged that visualization can include a combination of both positive and negative visualization. In essence, you show your audience both possible outcomes and have them decide which one they would rather have.

The final step in Monroe’s motivated sequence is the action step, in which a speaker asks an audience to approve the speaker’s proposal. For understanding purposes, we break action into two distinct parts: audience action and approval. Audience action refers to direct physical behaviors a speaker wants from an audience (e.g., flossing their teeth twice a day, signing a petition, wearing seat belts). Approval, on the other hand, involves an audience’s consent or agreement with a speaker’s proposed attitude, value, or belief.

When preparing an action step, it is important to make sure that the action, whether audience action or approval, is realistic for your audience. Asking your peers in a college classroom to donate one thousand dollars to charity isn’t realistic. Asking your peers to donate one dollar is considerably more realistic. In a persuasive speech based on Monroe’s motivated sequence, the action step will end with the speech’s concluding device. As discussed elsewhere in this text, you need to make sure that you conclude in a vivid way so that the speech ends on a high point and the audience has a sense of energy as well as a sense of closure.

Specific Purpose: To persuade my classroom peers that the United States should have stronger laws governing the use of for-profit medical experiments.

This example shows how you can take a basic speech topic and use Monroe’s motivated sequence to clearly and easily outline your speech efficiently and effectively.

Table 17.2 “Monroe’s Motivated Sequence Checklist” also contains a simple checklist to help you make sure you hit all the important components of Monroe’s motivated sequence.

Another format for organizing a persuasive speech is the problem-cause-solution format. In this specific format, you discuss what a problem is, what you believe is causing the problem, and then what the solution should be to correct the problem.

Specific Purpose: To persuade my classroom peers that our campus should adopt a zero-tolerance policy for hate speech.

In this speech, you want to persuade people to support a new campus-wide policy calling for zero-tolerance of hate speech. Once you have shown the problem, you then explain to your audience that the cause of the unnecessary confrontations and violence is prior incidents of hate speech. Lastly, you argue that a campus-wide zero-tolerance policy could help prevent future unnecessary confrontations and violence. Again, this method of organizing a speech is as simple as its name: problem-cause-solution.

The final method for organizing a persuasive speech is called the comparative advantages speech format. The goal of this speech is to compare items side-by-side and show why one of them is more advantageous than the other. For example, let’s say that you’re giving a speech on which e-book reader is better: Amazon.com’s Kindle or Barnes and Nobles’ Nook. Here’s how you could organize this speech:

Specific Purpose: To persuade my audience that the Nook is more advantageous than the Kindle.

As you can see from this speech’s organization, the simple goal of this speech is to show why one thing has more positives than something else. Obviously, when you are demonstrating comparative advantages, the items you are comparing need to be functional equivalents—or, as the saying goes, you cannot compare apples to oranges.