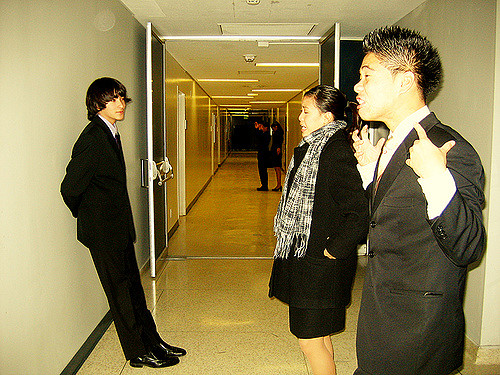 Once you’ve finished creating the physical structure of the speech, including all the sources you will use to support your main points, it’s time to work on delivering your speech. The old maxim that “practice makes perfect” is as valid as ever in this case. We are not downplaying the importance of speech preparation at all. However, you could have the best speech outline in the world with the most amazing support, but if your delivery is bad, all your hard work will be lost on your audience members. In this section, we’re going to briefly talk about the two fundamental aspects related to practicing your speech: verbal and nonverbal delivery.

Verbal delivery is the way we actually deliver the words within the speech. You may, or may not, have noticed that up to this point in this chapter we have not used the phrases “writing your speech” or “speech writing.” One of the biggest mistakes new public speakers make is writing out their entire speech and then trying to read the speech back to an audience. You may wonder to yourself, “Well, doesn’t the president of the United States read his speeches?” And you’re right; the president generally does read his speeches. But he also had years of speaking experience under his belt before he learned to use a TelePrompTer.

While reading a speech can be appropriate in some circumstances, in public speaking courses, the goal is usually to engage in what is called extemporaneous speaking. Extemporaneous speaking involves speaking in a natural, conversational tone and relying on notes rather than a prepared script. People who need to read speeches typically do so for one of two reasons: (1) the content of their speech is so specific and filled with technical terminology that misspeaking could cause problems, or (2) the slightest misspoken word could be held against the speaker politically or legally. Most of us will not be in either one of those two speaking contexts, so having the stuffiness and formalness of a written speech isn’t necessary and can actually be detrimental.

So how does one develop an extemporaneous speaking style? Practice! You’ve already created your outline, now you have to become comfortable speaking from a set of notes. If you put too much information on your notes, you’ll spend more time reading your notes and less time connecting with your audience. Notes should help you remember specific quotations, sources, and details, but they shouldn’t contain the entire manuscript of your speech. Learning how to work with your notes and phrase your speech in a comfortable manner takes practice. It’s important to realize that practice does not consist of running through your speech silently in your mind. Instead, you need to stand up and rehearse delivering your speech out loud. To get used to speaking in front of people and to get constructive feedback, and we recommend that you ask a few friends to serve as your practice audience.

In addition to thinking about how we are going to deliver the content of the speech, we also need to think about how we’re going to nonverbally deliver our speech. While there are many aspects of nonverbal delivery we could discuss here, we’re going to focus on only three of them: eye contact, gestures, and movement.

One of the most important nonverbal behaviors we can exhibit while speaking in public is gaining and maintaining eye contact. When we look at audience members directly, it helps them to focus their attention and listen more intently to what you are saying. On the flip side, when a speaker fails to look at audience members, it’s easy for the audience to become distracted and stop listening. When practicing your speech, think about the moments in the speech when it will be most comfortable for you to look at people in your audience. If you have a long quotation, you’ll probably need to read that quotation. However, when you then explain how that quotation relates to your speech, that’s a great point to look up from your notes and look someone straight in the eye and talk to them directly. When you’re engaging in eye contact, just tell yourself that you’re talking to that person specifically.

A second major area of nonverbal communication for new public speakers involves gesturing. Gesturing is the physical manipulation of arms and hands to add emphasis to a speech. Gestures should be meaningful while speaking. You want to avoid being at either of the extremes: too much or too little. If you gesture too much, you may look like you’re flailing your arms around for no purpose, which can become very distracting for an audience. At the same time, if you don’t gesture at all, you’ll look stiff and disengaged. One of our friends once watched a professor (who was obviously used to speaking from behind a lectern) give a short speech while standing on a stage nervously gripping the hems of his suit coat with both hands. Knowing how to use your hands effectively will enhance your delivery and increase the impact of your message.

If you’re a new speaker, we cannot recommend highly enough the necessity of seeing how you look while practicing your speech, either by videotaping yourself or by practicing in front of a full-length mirror. People are often apprehensive about watching video tapes of themselves speaking, but the best way to really see how you look while speaking is—well, literally to see how you look while speaking. Think of it this way: If you have a distracting mannerism that you weren’t conscious of, wouldn’t you rather become aware of it before your speech so that you can practice making an effort to change that behavior?

The last major aspect of nonverbal communication we want to discuss here relates to how we move while speaking. As with gesturing, new speakers tend to go to one of two extremes while speaking: no movement or too much movement. On the one end of the spectrum, you have speakers who stand perfectly still and do not move at all. These speakers may also find comfort standing behind a lectern, which limits their ability to move in a comfortable manner. At the other end of the spectrum are speakers who never stop moving. Some even start to pace back and forth while speaking. One of our coauthors had a student who walked in a circle around the lectern while speaking, making the audience slightly dizzy—and concerned that the student would trip and hurt herself in the process.

When it comes to movement, standing still and incessant pacing are both inappropriate for public speaking. So how then should one move during a speech? Well, there are a range of different thoughts on this subject. We recommend that you plan out when you’re going to move while speaking. One common way is to purposefully move when you are making the transition from one major point of your speech to the next. You might also take a step toward the audience at the moment when you are intensifying a point, or take a step back when saying something like, “Let’s back up and think about this for a moment.” However, we don’t recommend moving when discussing important, complex ideas during your speech because the movement could be distracting and prevent audience members from fully understanding your message. Overall, you should practice movement so that it becomes comfortable for you and second nature.