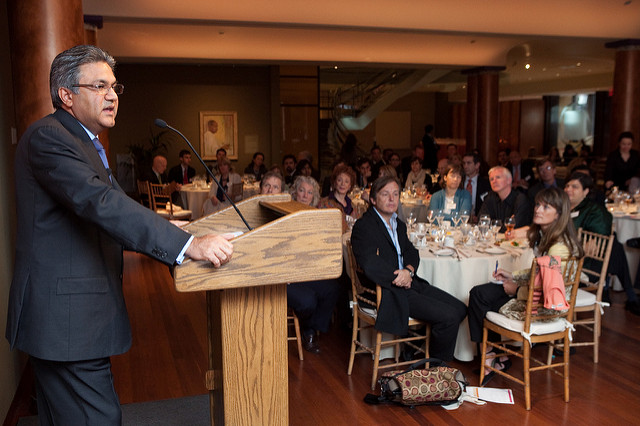 The last type of entertaining speech we will examine is the keynote speech. A keynote speech is delivered to set the underlying tone and summarize the core message of an event. Keynotes are often given at the end of an event; there can also be a number of keynote speeches delivered throughout a longer event that lasts for several days. People who deliver keynote speeches are typically experts in a given area who are invited to speak at a conference, convention, banquet, meeting, or other kind of event for the purpose of setting a specific tone for the occasion. Some keynote speakers will actually work for a speakers bureau, an agency that represents celebrity and professional speakers. One very important organization for all aspiring keynote speakers is the National Speaker’s Association (NSA, http://www.nsaspeaker.org). NSA also publishes a widely respected magazine for professional speakers called Speaker magazine, which can be accessed for free from their website (http://www.nsaspeaker-magazine.org).

In the world of professional public speaking, there are two common types of keynotes: after-dinner speeches and motivational speeches. Let’s look at each of these unique speeches.

Next, go back through the speech and look for opportunities to insert humorous remarks. Table 18.1 “Forms of Verbal Humor” lists various forms of verbal humor that are often used in the textual portion of a speech.

Each of these is a possible humor device that could be implemented in a speech. Read the following speech delivered by Mark Twain on his seventieth birthday for a good example of an after-dinner speech (http://etext.lib.virginia.edu/railton/onstage/70bday.html).

Once you’ve looked through your speech, examining places for verbal humor, think about any physical humor or props that would enhance your speech. Physical humor is great if you can pull it off without being self-conscious. One of the biggest mistakes any humorist makes is to become too aware of what his or her body is doing because it’s then harder to be free and funny. As for props, after-dinner speakers have been known to use everything from oversize inflatable baseball bats to rubber clown noses. The goal for a funny prop is that it adds to the humor of the speech without distracting from its message.

Last, and probably most important, try the humor out on real, live people. This is important for three reasons.

First, the success of humor depends heavily on delivery, and especially timing in delivery. You will need practice to polish your delivery so that your humor comes across. If you can’t make it through one of your jokes without cracking up, you will need to either incorporate the self-crackup into your delivery or forgo using that joke.

Second, just because you find something unbelievably funny in your head doesn’t mean that it will make anyone else laugh. Often, humor that we have written down on paper just doesn’t translate when orally presented. You may have a humorous story that you love reading on paper, but find that it just seems to drone on once you start telling it out loud. Furthermore, remember there is a difference between written and verbal language, and this also translates to how humor is interpreted.

Third, you need to make sure the humor you choose will be appropriate for a specific audience. What one audience finds funny another may find offensive. Humor is the double-edged sword of public speaking. On one side, it is an amazing and powerful speaking tool, but on the other side, few things will alienate an audience more than offensive humor. If you’re ever uncertain about whether a piece of humor will offend your audience, don’t use it.

The following are some other tips for using humor from people who have professionally given after-dinner speeches and learned the hard way what to do and what to avoid:

The second common form of keynote speaking is motivational speaking. A motivational speech is designed not only to make an audience experience emotional arousal (fear, sadness, joy, excitement) but also to motivate the audience to do something with that emotional arousal. Whereas a traditional persuasive speech may want listeners to purchase product X or agree with ideology Y, a motivational speech helps to inspire people in a broader fashion, often without a clearly articulated end result in mind. As such, motivational speaking is a highly specialized form of persuasive speaking commonly delivered in schools, businesses, religious, and club or group contexts. The Toastmasters International Guide to Successful Speaking lists four types of motivational speeches: hero, survivor, religious, and success (Slutsky & Aun, 1997).

The hero speech is a motivational speech given by someone who is considered a hero in society (e.g., military speakers, political figures, and professional athletes). Just type “motivational speech” into YouTube and you’ll find many motivational speeches given by individuals who can be considered heroes or role models. The following clip presents a speech by Steve Sax, a former major league baseball player.

In this speech, Sax talks about his life as a baseball player, along with issues related to leadership, overcoming obstacles, and motivation.

The survivor speech is a speech given by someone who has survived a personal tragedy or who has faced and overcome serious adversity. In the following clip, cancer survivor Becky M. Olsen discusses her life as a cancer survivor.

Becky Olsen goes all over the country talking with and motivating cancer survivors to beat the odds.

The religious speech is fairly self-explanatory; it is designed to incorporate religious ideals into a motivational package to inspire an audience into thinking about or changing aspects of their religious lives. One highly sought-after religious speaker in the United States is Joel Osteen, head minister at Lakewood Church in Houston, Texas. In this clip, Joel is talking about finding and retaining joy in life.

The final type of motivational speech is the success speech, which is given by someone who has succeeded in some aspect of life and is giving back by telling others how they too can be successful. In the following clip the then CEO of Xerox, Anne Mulcahy, speaks before a group of students at Dartmouth College discussing the spirit of entrepreneurship.

In this speech, Mulcahy shares the leadership lessons she had learned as the CEO of Xerox.