Intrinsic Regulation • receptors are subject to regulation and homeostatic control. Left unregulated, receptors may be over stimulated, which may lead to pathological changes, including apoptosis. Therefore, regulation helps protect cells. There are times when an increased response is needed and others when a decreased response is preferred. 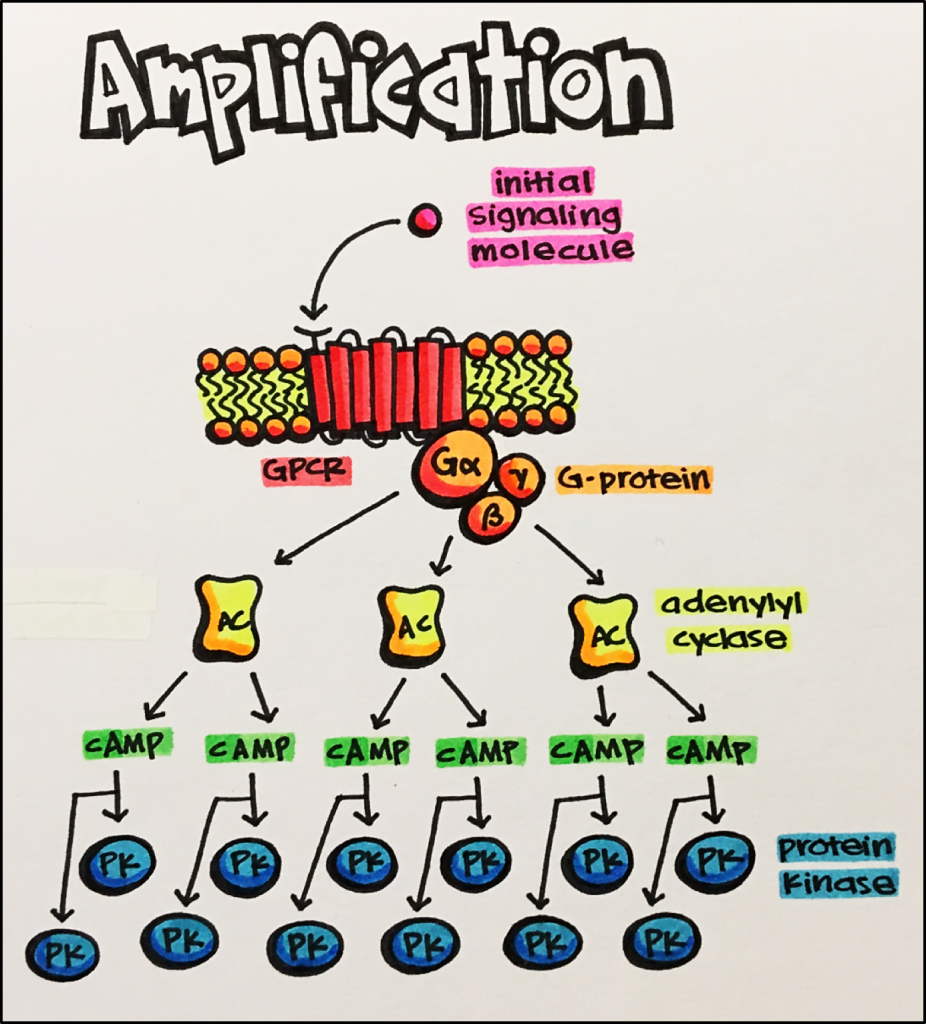 Synergism • when two receptors produce a combined effect that is greater than the sum of their individual effect.

Example • Glucocorticoids stimulate glucocorticoid receptors [GR], a type of nuclear receptor, resulting in increased erythroid cell (series of cell leading to red blood cells) production. When peroxisome proliferator-activated receptor alpha [PPARa] and GRs are stimulated simultaneously by their respective agonists, the resultant erythroid cell production is greater than the sum of production by each receptor individually. Together, PPARa and GR stimulation result in an enhanced response. 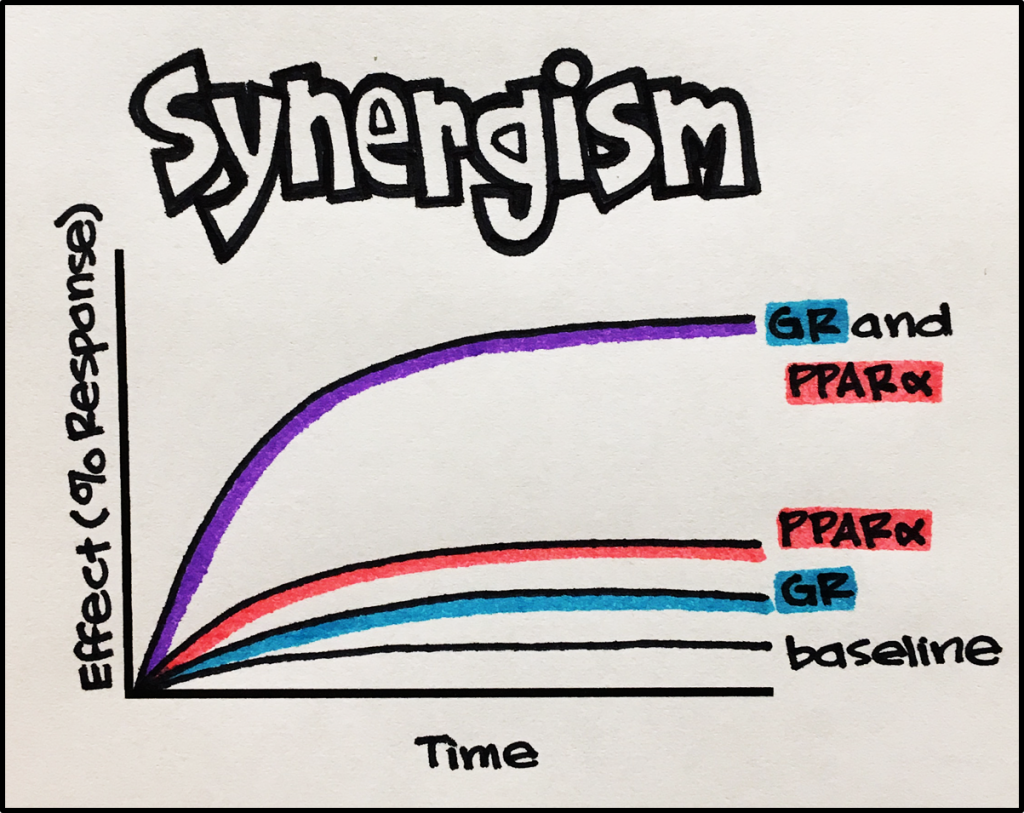 Upregulation • Upregulation refers to an increase in the number of receptors due to prolonged deprivation of receptors of interacting with their physiological neurotransmitter (e.g. by denervation of chronic use of a receptor antagonist). By expressing more receptors, there is a greater probability that a hormone will bump into and stimulate its receptor.

Desensitization • Desensitization refers to a reduced response to an agonist drug due to over activation of a receptor (high doses, prolonged exposure to agonist). There is a number of mechanisms of desensitization including: loss of receptor function through a decrease in receptor-coupled signaling components (e.g., G-proteins). Receptor desensitization may occur in the absence of significant changes in the number of receptors.

This example here demonstrates loss of receptor function; one of several types of desensitization. As you can see on the far right, the agonist is bound to the receptor, however, this does not result in the channel opening.
Downregulation • Downregulation specifically refers to a reduction in the total number of receptors available to be stimulated due to prolonged receptor activation (e.g. by chronic treatment with a pharmacological agonist drug or prolonged inhibition of metabolism of a neurotransmitter). This reduction in receptors in turn will decrease the cell’s sensitivity to an agonist or drug. Downregulation occurs through endocytosis. Internalized receptors may either be degraded in the lysosomes or recycled back to the membrane surface later. 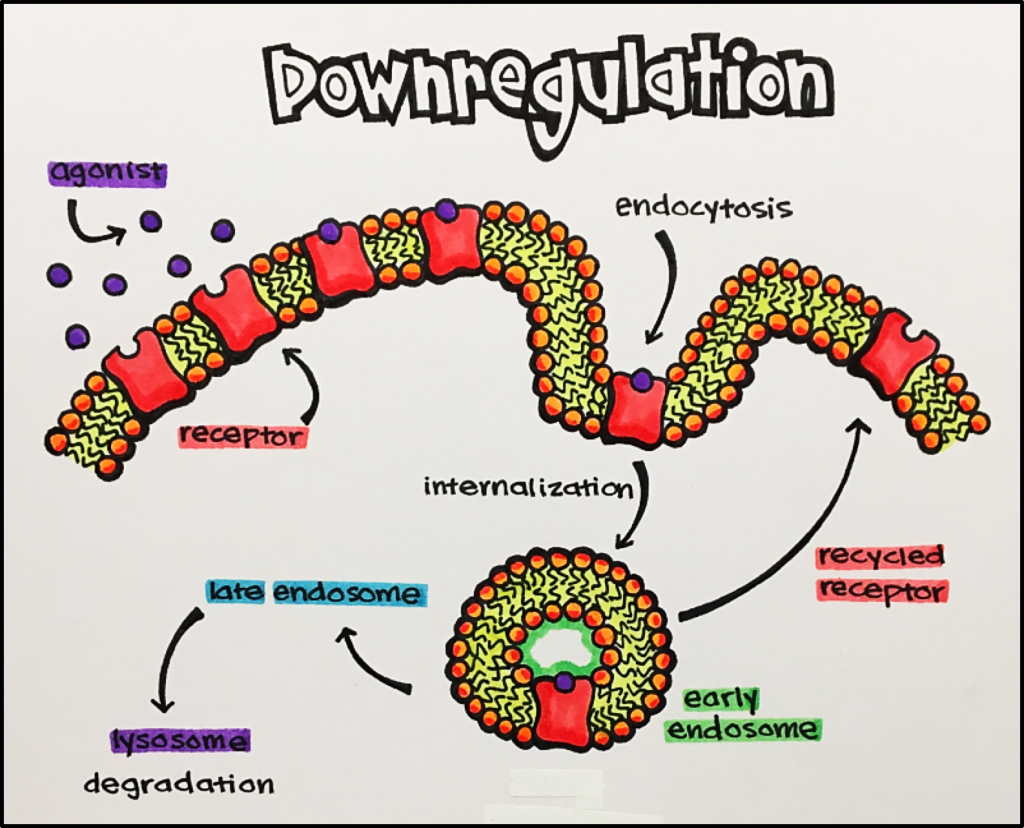 Tachyphylaxis • Tachyphylaxis is a rapid decrease in response to an agonist drug following repeated administration within a brief period; an acute form of desensitization. This can occur without a change in the number of receptors or the ability of a receptor to affect the downstream signaling molecules. Increasing the dose of the drug will not improve the response. 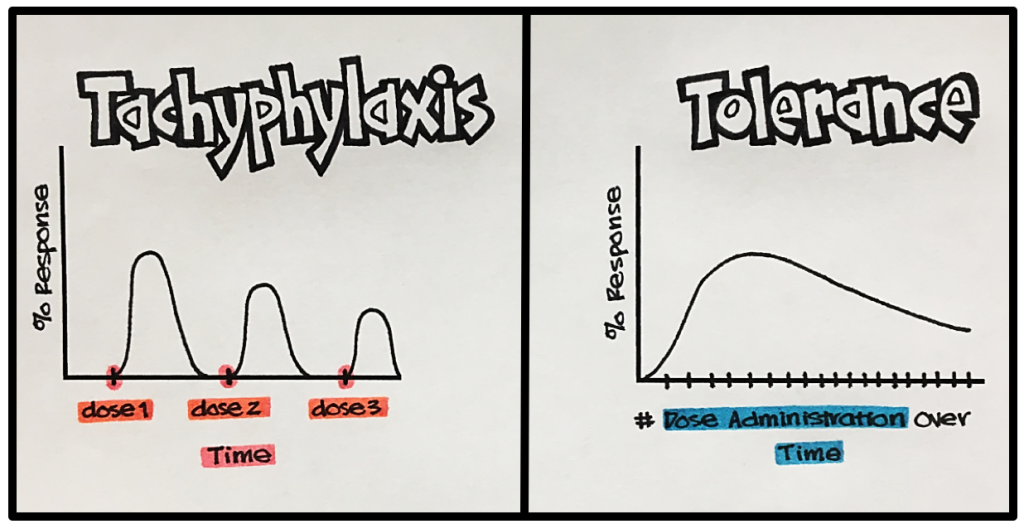 Tolerance • Tolerance refers to a gradual decreased response to a drug, requiring a higher dose of drug to achieve the same initial response. Tolerance is different from tachyphylaxis because it develops over a long period of time, whereas, tachyphylaxis is an acute event. In addition, tolerance can be overcome by increasing the dose, unlike tachyphylaxis.

Example • A great example of tolerance is in the story of Brett Favre, a Hall of Fame quarterback who played for the Green Bay Packers 1991-2010. In the midst of his career he developed an addiction to Vicodin (an analgesic medication that contains hydrocodone, an agonist of opiate receptors). He started taking two tablets to treat his sports-related injuries/pain and eventually worked his way up to 15 tablets due to a development of tolerance to Vicodin. At his worst, he was taking 14-days’ worth of Vicodin each day in order to achieve the same effect he originally had with 2 tablets, which contributed to his streak of 297 consecutive games played; currently the longest streak in NFL history by 27 games. You may read more about it at the link below:

Myasthenia Gravis is treated with immunosuppressants to decrease the production of antibodies that destroy nAChRs as well as with acetylcholine esterase inhibitors [AChEIs] that prevent the breakdown of acetylcholine, a nAChR agonist, to increase its level in the synapse.

Treatment for these syndromes includes hormone therapy; testosterone and/or dihydrotestosterone [DHT]. One great advantage of DHT over testosterone is that cannot be aromatized to estrogen, eliminating possible side effects associated with estrogen exposure.

Example • Gain-of-Function •A number of endocrine diseases are caused by gain-of-function mutations of GPCRs.

Type 2 Diabetes Mellitus [DM2] •  DM2 can be associated with a gain-of-function mutation, resulting in increased expression of the a2A-adrenergic receptor; a GPCR that prevents or suppresses the secretion of insulin. As you can imagine, a patient with this gain-of-function mutation will have elevated blood glucose, potentially leading to type II diabetes mellitus.

Familial Hypocalcemia Hypocalciuria • This disease involves a gain-of-function mutation of the calcium-sensing receptor [CaSR]; a GPCR that allows the body to monitor and regulate the amount of calcium in the blood. This gain-of-function leads to increased sensitivity to calcium. Because CaSR maintains calcium homeostasis, its exaggerated response to calcium tells the body to excrete more calcium. This leads to decreased calcium levels in the blood (hypocalcemia) by suppressing the secretion of parathyroid hormone and increased renal excretion of calcium (hypercalciuria).