Ligand-Gated Ion Channels – allow ions to flow into or out of the cell in response to the binding of a chemical messenger to their respective receptors.

Acetylcholine Receptors – There are two families of acetylcholine receptors; muscarinic and nicotinic. Both families are found pre-synaptically (ndurons that send neurotransmitter signals) as well as post-synpatically (neurons that receive neurotransmitter signals). They are widely distributed throughout the central nervous system (CNS) and peripheral organs. Certain neurodegenerative diseases, especially Alzheimer’s dementia, are associated with reduction in the number of cholinergic neurons (neurons that synthesize and release acetylcholine).

Nicotinic Acetylcholine Receptors [nAChR] – these channels are pentamers composed of multiple subunits, these channels are directly coupled to cation channels and mediate FAST EXCITATORY synaptic transmission at the NEUROMUSCULAR junction, autonomic ganglia and various sites in the CNS. 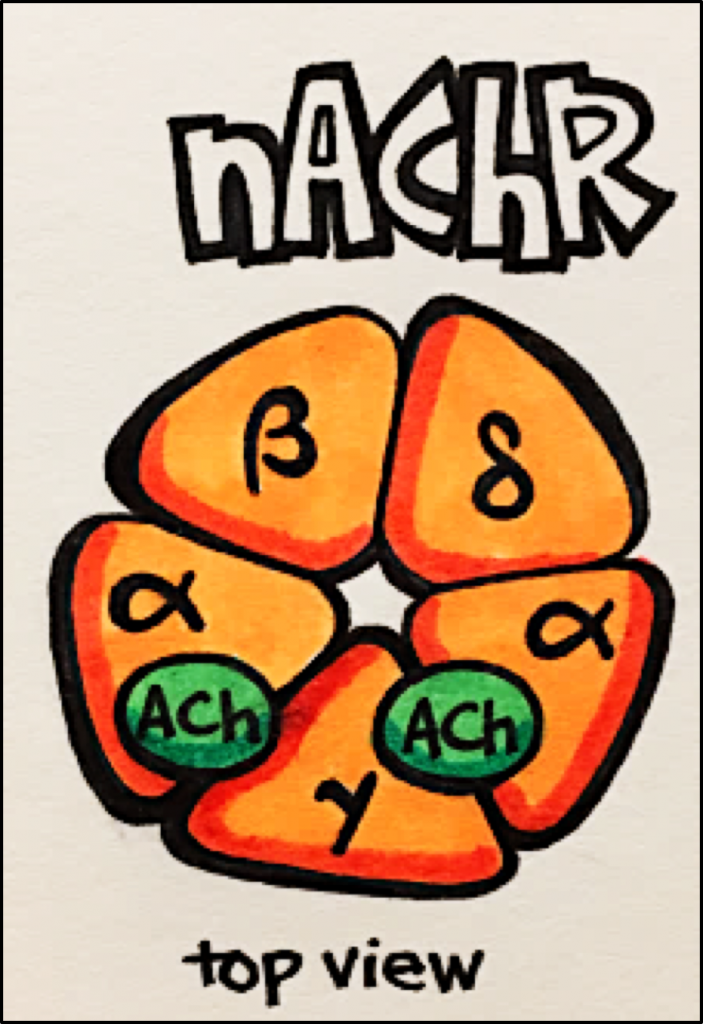 Muscarinic Acetylcholine Receptors [mAChRs] – mAChRs are G protein coupled receptors [GPCRs] and, therefore, will not be discussed in detail in this section.

nAChR Synapse – nAChRs are found in neuromuscular and ganglionic synapses. Reminder – a synapse is the gap through which electrical or chemical signals are transmitted from a nerve to a muscle or another nerve. Presynaptic nAChRs facilitate ACh release during synaptic activity. Excess neurotransmitter is recycled and broken down by an enzyme called acetylcholinesterase [AChE], rendering ACh inactive as a neurotransmitter. 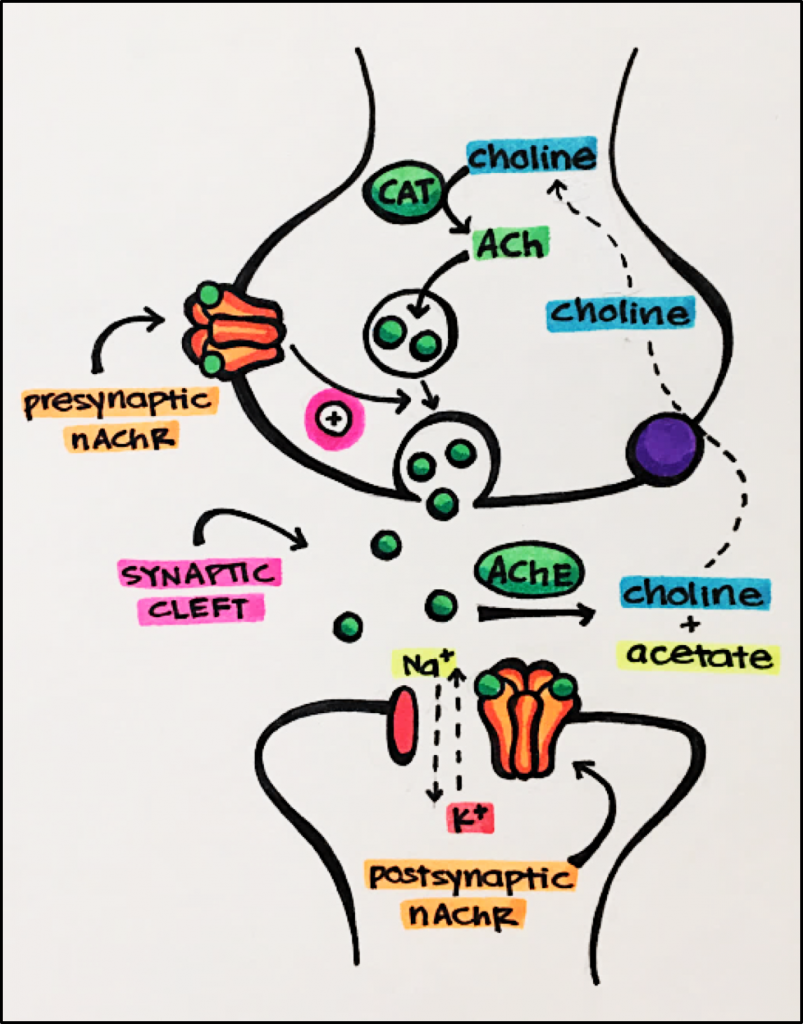 Below – In this image, the nicotinic acetylcholine receptor [nAChR] functions to regulate the release of the neurotransmitters [NT] norepinephrine [NE]. Two acetylcholine [ACh] molecules bind the nAChR resulting in the release of NE from the postganglionic fiber. NE will bind to alpha and beta receptors [GPCRs] located on peripheral tissues producing a number of effects associated with a “fight or flight” response such as increased heart rate and contractility, and bronchiole dilation. 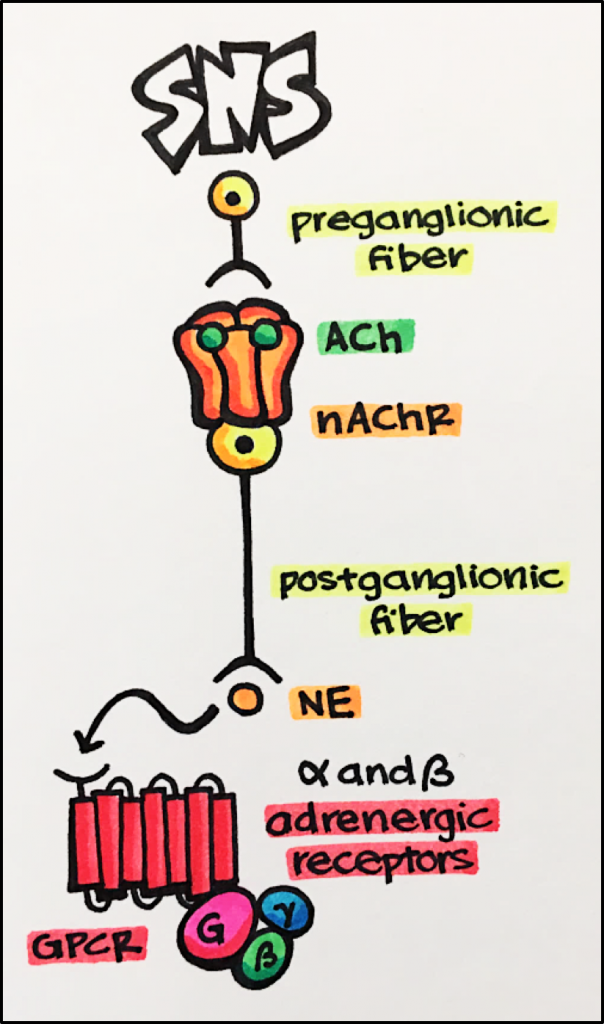 Below – In this image, the nAChR also functions to regulate the release of the NT Ach from the postganglionic fiber. ACh goes on to stimulate muscarinic acetylcholine receptors [mAChR; GPCR] located on peripheral tissues producing a number of effects associated with “resting and digesting” such as reduced heart rate and contractility and increased intestinal activity. 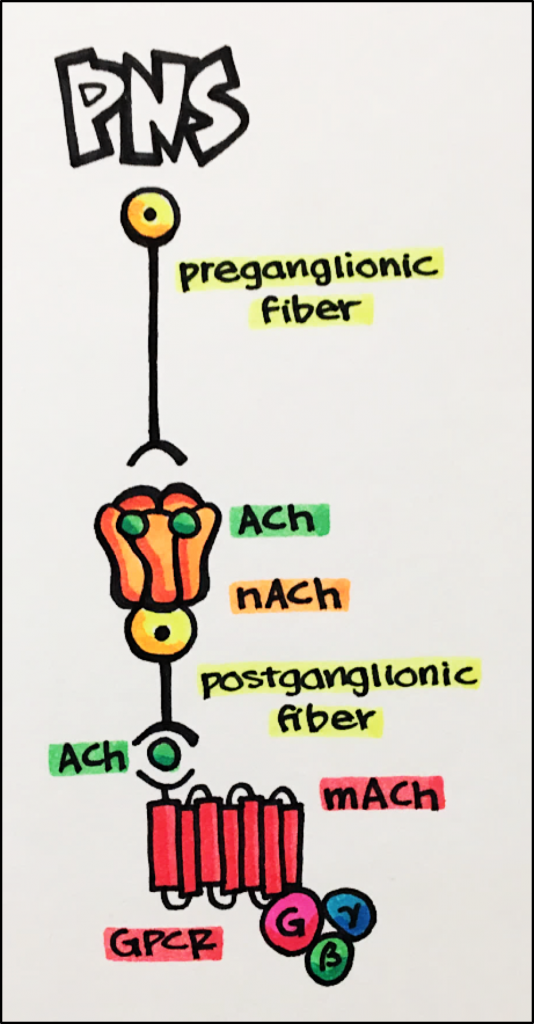 GABAA Receptors – these receptors are pentamers (i.e. five subunits) that include a GABA binding site, a channel through which ions (chloride) can travel, as well as a variety of modulatory sites.

GABA is an endogenous agonist synthesized from glutamate

GABA is the main INHIBITORY transmitter in the brain. It acts on both GABAA receptors (GPCRs).

GABAA receptors provide one of the best examples of the application of allosteric modulators. For example, benzodiazepines (e.g., valium) bind to a receptor subunit different from (i.e., allosteric) that where GABA binds. This binding results in altering the conformation of the GABA binding site to a state that has higher affinity for GABA (positive allosteric modulation). This results in potentiating the CNS suppression induced by GABA and explains the effectiveness of benzodiazepines in the treatment of anxiety. 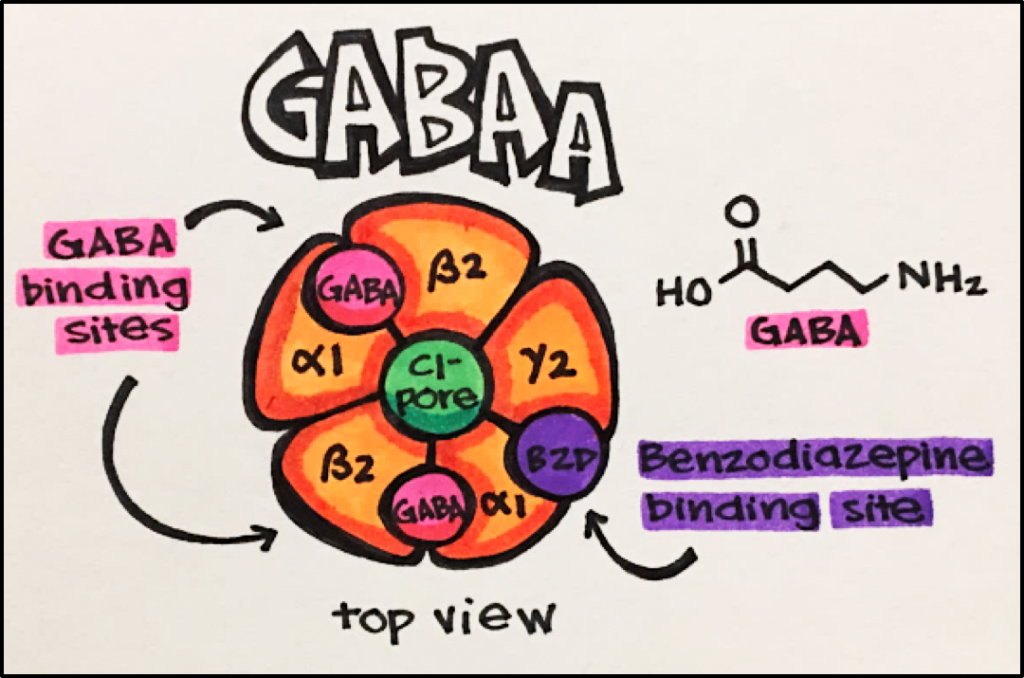 Glutamate Receptors – composed of homo- or hetero-tetramers (four subunits). Found in the CNS on presynaptic neurons that control the release of neurotransmitters. Some glutamate receptors are couple to G proteins (metabotropic) while others are coupled to ion channels (ionotropic).

NMDA receptors have a number of important roles such as in the development of the CNS, rhythmic breathing as well as learning and memory.

Agonists – NMDA receptors need both glutamate and glycine to bind to the receptor in order to produce a biological effect.
Actions – increased NA+ and Ca2+ influx

Structure – each subunit of the NMDA Receptor has an extracellular N-terminus with 3 transmembrane domains, an intramembrane reentrant “p-loop” between the 1st and 3rd transmemrane domains and an intracellular C-terminus.