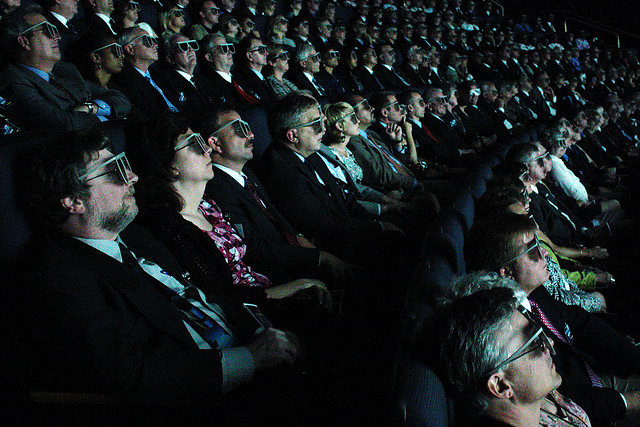 In 2009, many moviegoers were amazed by the three-dimensional (3-D) film Avatar. Avatar grossed over $1.8 billion in theaters worldwide, $1.35 billion from 3-D sales alone (Gray, 2010). Following in that vein, dozens of other movie studios released 3-D films, resulting in lesser box office successes such as Alice in Wonderland, Clash of the Titans, and Shrek Forever After. Many film reviewers and audiences seemed adamant—3-D movies were the wave of the future.

However, could this eye-popping technology actually ruin our moviegoing experience? Brian Moylan, a critic for Gawker.com, argues that it already has. The problem with 3-D, he says, is that “It is so mind-numbingly amazing that narrative storytelling hasn’t caught up with the technology. The corporate screenwriting borgs are so busy trying to come up with plot devices to highlight all the newfangled whoosiwhatsits—objects being hurled at the audience, flying sequences, falling leaves, glowing Venus Flytraps—that no one is really bothering to tell a tale (Moylan).”

James Cameron, director of Avatar, agrees. “[Studios] think, ‘what was the takeaway lessons from Avatar? Oh you should make more money with 3-D.’ They ignore the fact that we natively authored the film in 3-D, and [they] decide that what we accomplished in several years of production could be done in an eight week (post-production 3-D) conversion [such as] with Clash of the Titans (Baig, 2010).” Cameron makes the following point: While recent films such as Avatar (2009) and Beowulf (2007) were created exclusively for 3-D, many other filmmakers have converted their movies to 3-D after filming was already complete. Clash of the Titans is widely criticized because its 3-D effects were quickly added in postproduction (Baig, 2010).

What effect does this have on audiences? Aside from the complaints of headaches and nausea (and the fact that some who wear glasses regularly can find it uncomfortable or even impossible to wear 3-D glasses on top of their own), many say that the new technology simply makes movies look worse. The film critic Roger Ebert has continuously denounced the technology, noting that movies such as The Last Airbender look like they’re “filmed with a dirty sheet over the lens (Ebert, 2010).” 3-D technology can cause a movie to look fuzzier, darker, and generally less cinematically attractive. However, movie studios are finding 3-D films attractive for another reason.

Because seeing a movie in 3-D is considered a “premium” experience, consumers are expected to pay higher prices. And with the increasing popularity of IMAX 3D films, tickets may surpass $20 per person (Stewart & McClintock, 2010). This gives 3-D films an advantage over 2-D ones as audiences are willing to pay more.

The recent 3-D boom has often been compared to the rise of color film in the early 1950s. However, some maintain that it’s just a fad. Will 3-D technology affect the future of filmmaking? With a host of new 3-D technologies for the home theater being released in 2010, many are banking on the fact that it will. Director James Cameron, however, is unsure of the technology’s continuing popularity, arguing that “If people put bad 3-D in the marketplace they’re going to hold back or even threaten the emerging of 3-D (Baig).” What is important, he maintains, is the creative aspect of moviemaking—no technology can replace good filmmaking. In the end, audiences will determine the medium’s popularity. Throughout the history of film, Technicolor dyes, enhanced sound systems, and computer-generated graphics have boasted huge box-office revenues; however, it’s ultimately the viewers who determine what a good movie is and who set the standard for future films.