After exploring the ways technology, culture, and mass media have affected one another over the years, it may also be helpful to look at recent cultural eras more broadly. A cultural period is a time marked by a particular way of understanding the world through culture and technology. Changes in cultural periods are marked by fundamental switches in the way people perceive and understand the world. In the Middle Ages, truth was dictated by authorities like the king and the church. During the Renaissance, people turned to the scientific method as a way to reach truth through reason. And, in 2008, Wired magazine’s editor in chief proclaimed that Google was about to render the scientific method obsolete (Anderson, 2008). In each of these cases, it wasn’t that the nature of truth changed, but the way humans attempted to make sense of a world that was radically changing. For the purpose of studying culture and mass media, the post-Gutenberg modern and postmodern ages are the most relevant ones to explore.

The Modern Age, or modernity, is the postmedieval era, a wide span of time marked in part by technological innovations, urbanization, scientific discoveries, and globalization. The Modern Age is generally split into two parts: the early and the late modern periods.

The early modern period began with Gutenberg’s invention of the movable type printing press in the late 15th century and ended in the late 18th century. Thanks to Gutenberg’s press, the European population of the early modern period saw rising literacy rates, which led to educational reform. As noted in preceding sections, Gutenberg’s machine also greatly enabled the spread of knowledge and, in turn, spurred the Renaissance and the Protestant Reformation. During the early modern period, transportation improved, politics became more secularized, capitalism spread, nation-states grew more powerful, and information became more widely accessible. Enlightenment ideals of reason, rationalism, and faith in scientific inquiry slowly began to replace the previously dominant authorities of king and church.

The French and American revolutions were inspired by a rejection of monarchy in favor of national sovereignty and representative democracy. Both revolutions also heralded the rise of secular society as opposed to church-based authority systems. Democracy was well suited to the so-called Age of Reason, with its ideals of individual rights and progress.

Though less political, the Industrial Revolution had equally far-reaching consequences. It did not merely change the way goods were produced—it also fundamentally changed the economic, social, and cultural framework of its time. The Industrial Revolution doesn’t have clear start or end dates. However, during the 19th century, several crucial inventions—the internal combustion engine, steam-powered ships, and railways, among others—led to innovations in various industries. Steam power and machine tools increased production dramatically. But some of the biggest changes coming out of the Industrial Revolution were social in character. An economy based on manufacturing instead of agriculture meant that more people moved to cities, where techniques of mass production led people to value efficiency both in and out of the factory. Newly urbanized factory laborers could no longer produce their own food, clothing, or supplies, and instead turned to consumer goods. Increased production led to increases in wealth, though income inequalities between classes also started to grow.

These overwhelming changes affected (and were affected by) the media. As noted in preceding sections, the fusing of steam power and the printing press enabled the explosive expansion of books and newspapers. Literacy rates rose, as did support for public participation in politics. More and more people lived in the city, had an education, got their news from the newspaper, spent their wages on consumer goods, and identified as citizens of an industrialized nation. Urbanization, mass literacy, and new forms of mass media contributed to a sense of mass culture that united people across regional, social, and cultural boundaries.

Modernity and the Modern Age, it should be noted, are distinct from (but related to) the cultural movement of modernism. The Modern Era lasted from the end of the Middle Ages to the middle of the 20th century; modernism, however, refers to the artistic movement of late 19th and early 20th centuries that arose from the widespread changes that swept the world during that period. Most notably, modernism questioned the limitations of traditional forms of art and culture. Modernist art was in part a reaction against the Enlightenment’s certainty of progress and rationality. It celebrated subjectivity through abstraction, experimentalism, surrealism, and sometimes pessimism or even nihilism. Prominent examples of modernist works include James Joyce’s stream-of-consciousness novels, cubist paintings by Pablo Picasso, atonal compositions by Claude Debussy, and absurdist plays by Luigi Pirandello.

Modernism can also be seen as a transitional phase between the modern and postmodern eras. While the exact definition and dates of the Postmodern Age are still being debated by cultural theorists and philosophers, the general consensus is that the Postmodern Age began during the second half of the 20th century and was marked by skepticism, self-consciousness, celebration of difference, and the reappraisal of modern conventions. The Modern Age took for granted scientific rationalism, the autonomous self, and the inevitability of progress; the Postmodern Age questioned or dismissed many of these assumptions. If the Modern Age valued order, reason, stability, and absolute truth, the Postmodern Age reveled in contingency, fragmentation, and instability. The effect of technology on culture, the rise of the Internet, and the Cold War are all aspects that led to the Postmodern Age.

The belief in objective truth that characterized the Modern Age is one of the major assumptions overturned in the Postmodern Age. Postmodernists instead took their cues from Erwin Schrödinger, the quantum physicist who famously devised a thought experiment in which a cat is placed inside a sealed box with a small amount of radiation that may or may not kill it. While the box remains sealed, Schrödinger proclaimed, the cat exists simultaneously in both states, dead and alive. Both potential states are equally true. Although the thought experiment was devised to explore issues in quantum physics, it appealed to postmodernists in its assertion of radical uncertainty. Rather than there being an absolute objective truth accessible by rational experimentation, the status of reality was contingent and depended on the observer.

This value of the relative over the absolute found its literary equivalent in the movement of deconstruction. While Victorian novelists took pains to make their books seem more realistic, postmodern narratives distrusted professions of reality and constantly reminded readers of the artificial nature of the story they were reading. The emphasis was not on the all-knowing author, but instead on the reader. For the postmodernists, meaning was not injected into a work by its creator, but depended on the reader’s subjective experience of the work. The poetry of Sylvia Plath and Allen Ginsberg exemplify this, as much of their work is emotionally charged and designed to create a dialogue with the reader, oftentimes forcing the reader to confront controversial issues such as mental illness or homosexuality.

Another way the Postmodern Age differed from the Modern Age was in the rejection of what philosopher Jean-François Lyotard deemed “grand narratives.” The Modern Age was marked by different large-scale theories that attempted to explain the totality of human experience, such as capitalism, Marxism, rationalism, Freudianism, Darwinism, fascism, and so on. However, increasing globalization and the rise of subcultures called into question the sorts of theories that claimed to explain everything at once. Totalitarian regimes during the 20th century, such as Adolf Hitler’s Third Reich and the USSR under Joseph Stalin, led to a mistrust of power and the systems held up by power. The Postmodern Age, Lyotard theorized, was one of micronarratives instead of grand narratives—that is, a multiplicity of small, localized understandings of the world, none of which can claim an ultimate or absolute truth. An older man in Kenya, for example, does not view the world in the same way as a young woman from New York. Even people from the same cultural backgrounds have different views of the world—when you were a teenager, did your parents understand your way of thinking? The diversity of human experience is a marked feature of the postmodern world. As Lyotard noted, “Eclecticism is the degree zero of contemporary general culture; one listens to reggae, watches a Western, eats McDonald’s food for lunch and local cuisine for dinner, wears Paris perfume in Tokyo and retro clothes in Hong Kong; knowledge is a matter for TV games (Lyotard, 1984).”

Postmodernists also mistrusted the idea of originality and freely borrowed across cultures and genres. William S. Burroughs gleefully proclaimed a sort of call to arms for his generation of writers in 1985: “Out of the closets and into the museums, libraries, architectural monuments, concert halls, bookstores, recording studios and film studios of the world. Everything belongs to the inspired and dedicated thief (Burroughs,1993).” The feminist artist Barbara Kruger, for example, creates works of art from old advertisements, and writers, such as Kathy Acker, reconstructed existing texts to form new stories. The rejection of traditional forms of art and expression embody the Postmodern Age.

From the early Modern Age through the Postmodern Age, people have experienced the world in vastly different ways. Not only has technology rapidly become more complex, but culture itself has changed with the times. When reading further, it’s important to remember that forms of media and culture are hallmarks of different eras, and the different ways in which media are presented often tell us a lot about the culture and times. 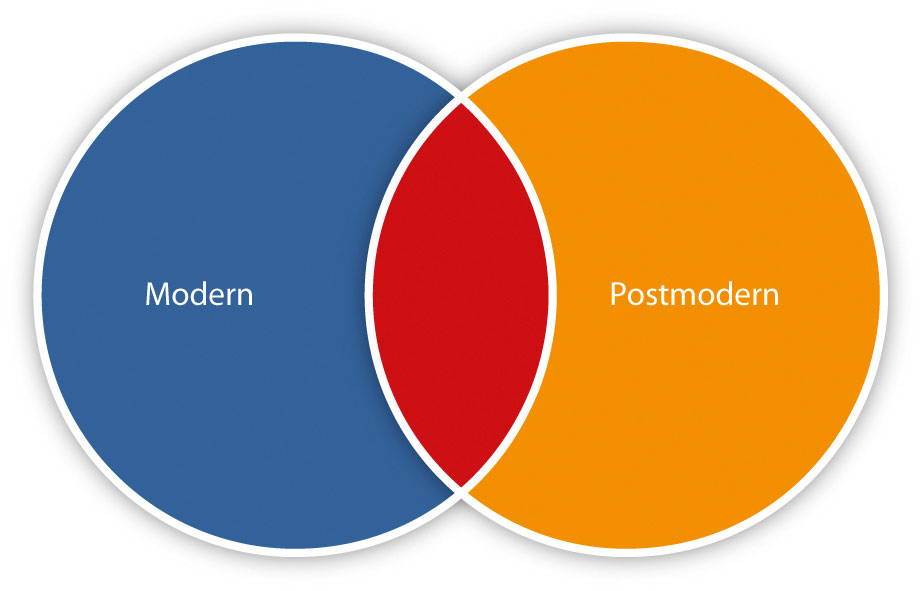 Draw a Venn diagram of the two cultural periods discussed at length in this chapter. Make a list of the features, values, and events that mark each period. Then, answer the questions below. Each response should be a minimum of one paragraph.