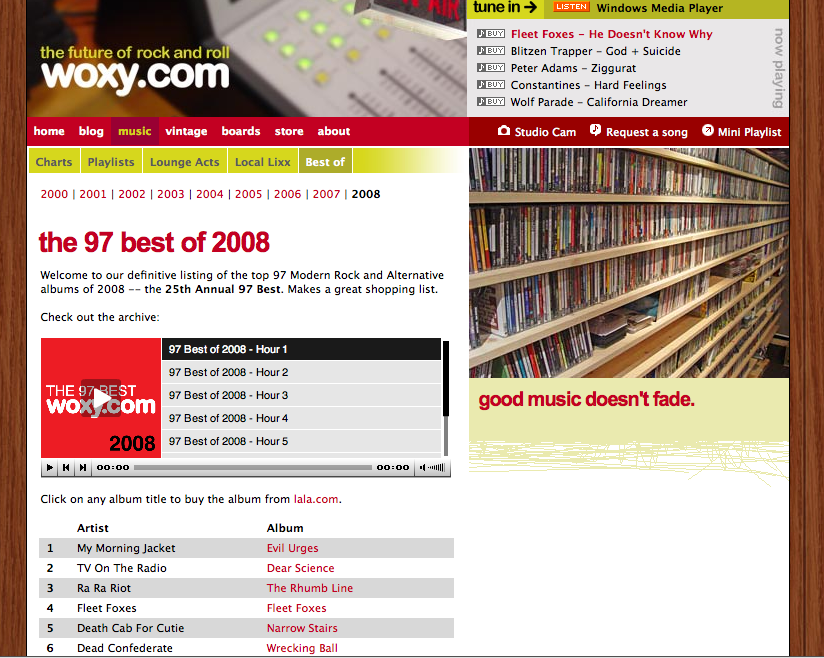 In 1983, radio station WOXY’s new owners bought the station and changed its format from Top 40 to the up-and-coming alternative rock format, kicking off with U2’s “Sunday Bloody Sunday (WOXY, 2009).” Then located in the basement of a fast-food restaurant in Ohio, the station was a risk for its purchasers, a husband and wife team who took a chance by changing the format to a relatively new one. Their investment paid off with the success of their station. By 1990, WOXY had grown in prestige to become one of Rolling Stone magazine’s top 15 radio stations in the country, and had even been made famous by a reference in the 1988 film Rain Man (Bishop, 2004). In 1998, the station launched a web cast and developed a national following, ranking 12th among Internet broadcasters for listenership in 2004 (Bishop, 2004).

The online version of the station struggled to make ends meet until it was purchased by the online music firm Lala (Cheng, 2010). The now-defunct Lala sold WOXY to music company Future Sounds Inc., which moved the station and staff from Ohio to Austin, Texas. In March 2010, citing “current economic realities and the lack of ongoing funding,” WOXY.com went off the air with only a day’s notice (Cheng, 2010).

Taken in the context of the modern Internet revolution and the subsequent faltering of institutions such as newspapers and book publishers, the rise and fall of WOXY may seem to bode ill for the general fate of radio. However, taken in the larger context of radio’s history, this story of the Internet’s effect on radio could prove to be merely another leap in a long line of radio revolutions. From the shutting down of all broadcasts during World War I to the eclipse of radio by television during the 1950s, many arbiters of culture and business have prophesized the demise of radio for decades. Yet this chapter will show how the inherent flexibility and intimacy of the medium has allowed it to adapt to new market trends and to continue to have relevance as a form of mass communication.