Cultural imperialism was around long before the United States became a world power. In its broadest strokes, imperialism describes the ways that one nation asserts its power over another. Just as imperial Britain economically ruled the American colonists, so did Britain strongly influence the culture of the colonies. The culture was still a mix of nationalities—many Dutch and Germans settled as well—but the ruling majority of ex-Britons led British culture to generally take over.

Today, cultural imperialism tends to describe the United States’ role as a cultural superpower throughout the world. American movie studios are generally much more successful than their foreign counterparts not only because of their business models but also because the concept of Hollywood has become one of the modern worldwide movie business’s defining traits. Multinational, nongovernmental corporations can now drive global culture. This is neither entirely good nor entirely bad. On one hand, foreign cultural institutions can adopt successful American business models, and corporations are largely willing to do whatever makes them the most money in a particular market—whether that means giving local people a shot at making movies, or making multicultural films such as 2008’s Slumdog Millionaire. However, cultural imperialism has potential negative effects as well. From a spread of Western ideals of beauty to the possible decline of local cultures around the world, cultural imperialism can have a quick and devastating effect.

To begin discussing the topic of cultural imperialism, it is important to look at the ideas of one of its founding theorists, Antonio Gramsci. Strongly influenced by the theories and writings of Karl Marx, Italian philosopher and critic Gramsci originated the idea of cultural hegemony to describe the power of one group over another. Unlike Marx, who believed that the workers of the world would eventually unite and overthrow capitalism, Gramsci instead argued that culture and the media exert such a powerful influence on society that they can actually influence workers to buy into a system that is not economically advantageous to them. This argument that media can influence culture and politics is typified in the notion of the American Dream. In this rags-to-riches tale, hard work and talent can lead to a successful life no matter where one starts. Of course, there is some truth to this, but it is by far the exception rather than the rule.

Marx’s ideas remained at the heart of Gramsci’s beliefs. According to Gramsci’s notion, the hegemons of capitalism—those who control the capital—can assert economic power, while the hegemons of culture can assert cultural power. This concept of culture is rooted in Marxist class struggle, in which one group is dominated by another and conflict arises. Gramsci’s concept of cultural hegemony is pertinent in the modern day not because of the likelihood of a local property-owning class oppressing the poor, but because of concern that rising globalization will permit one culture to so completely assert its power that it drives out all competitors.

A key danger of cultural imperialism is the possibility that American tastes will crowd out local cultures around the globe. The McDonaldization of the globe applies not just to its namesake, McDonald’s, with its franchises in seemingly every country, but to any industry that applies the technique of McDonald’s on a large scale. Coined by George Ritzer in his book The McDonaldization of Society (1993), the concept is rooted in the process of rationalization. With McDonaldization, four aspects of the business are taken to the extreme: efficiency, calculability, predictability, and control. These four things are four of the main aspects of free markets. Applying the concepts of an optimized financial market to cultural and human items such as food, McDonaldization enforces general standards and consistency throughout a global industry. 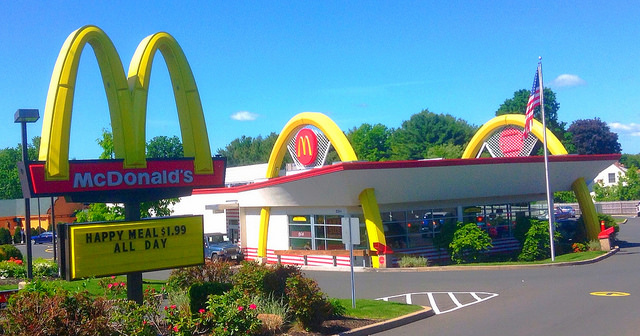 McDonald’s has opened up many culturally specific versions of its chain, all employing its famous Golden Arches.

Unsurprisingly, McDonald’s is the prime example of this concept. Although the fast-food restaurant is somewhat different in every country—for example, Indian restaurants offer a pork-free, beef-free menu to accommodate regional religious practices—the same fundamental principles apply in a culturally specific way. The branding of the company is the same wherever it is; the “I’m lovin’ it” slogan is inescapable, and the Golden Arches are, according to Eric Schlosser in Fast Food Nation, “more widely recognized than the Christian cross (Schlosser, 2001).” Yet, more importantly, the business model of McDonald’s stays relatively the same from country to country. Although culturally specific variations exist, any McDonald’s in a particular area has basically the same menu as any other. In other words, wherever a consumer is likely to travel within a reasonable range, the menu options and the resulting product remain consistent.

Media works in an uncannily similar way to fast food. Just as the automation of fast food—from freeze-dried french fries to prewrapped salads—attempts to lower a product’s marginal costs, thus increasing profits, media outlets seek to achieve a certain degree of consistency that allows them to broadcast and sell the same product throughout the world with minimal changes. The idea that media actually spreads a culture, however, is controversial. In his book Cultural Imperialism, John Tomlinson argues that exported American culture is not necessarily imperialist because it does not push a cultural agenda; it seeks to make money from whatever cultural elements it can throughout the world. According to Tomlinson, “No one really disputes the dominant presence of Western multinational, and particularly American, media in the world: what is doubted is the cultural implications of this presence (Tomlinson, 2001).”

There are, of course, by-products of American cultural exports throughout the world. American cultural mores, such as the Western standard of beauty, have increasingly made it into global media. As early as 1987, Nicholas Kristof wrote in The New York Times about a young Chinese woman who was planning to have an operation to make her eyes look rounder, more like the eyes of Caucasian women. Western styles—“newfangled delights like nylon stockings, pierced ears and eye shadow”—also began to replace the austere blue tunics of Mao-era China. The pervasiveness of cultural influence is difficult to track, however, as the young Chinese woman says that she wanted to have the surgery not because of Western looks but because “she thinks they are pretty (Kristof, 1987).” 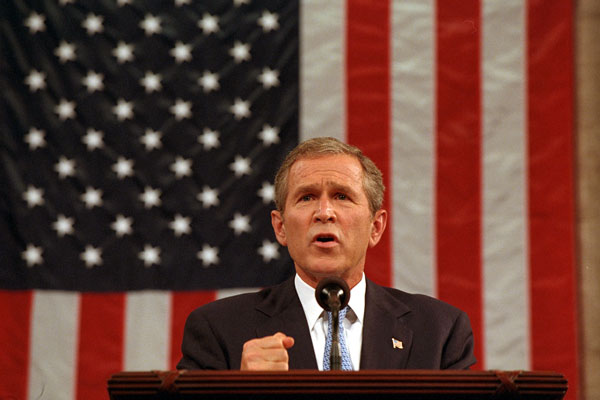 After September 11, 2001, President George W. Bush framed the issue of terrorism as a cultural conflict as much as a military one.

Not everyone views the spread of American tastes as a negative occurrence. During the early 21st century, much of the United States’s foreign policy stemmed from the idea that spreading freedom, democracy, and free-market capitalism through cultural influence around the world could cause hostile countries such as Iraq to adopt American ways of living and join the United States in the fight against global terrorism and tyranny. Although this plan did not succeed as hoped, it raises the question of whether Americans should truly be concerned about spreading their cultural system if they believe that it is an ideal one.

Speaking after the attacks of September 11, 2001, then-President George W. Bush presented two simple ideas to the U.S. populace: “They [terrorists] hate our freedoms,” and “Go shopping (Bush, 2001).” These twin ideals of personal freedom and economic activity are often held up as the prime exports of American culture. However, the idea that other local beliefs need to change may threaten people of other cultures.

The spread of culture works in mysterious ways. Hollywood probably does not actually have a master plan to export the American way of life around the globe and displace local culture, just as American music may not necessarily be a progenitor of democratic government and economic cooperation. Rather, local cultures respond to the outside culture of U.S. media and democracy in many different ways. First of all, media are often much more flexible than believed; the successful exportation of the film Titanic was not an accident in which everyone in the world suddenly wanted to experience movies like an American. Rather, the film’s producers had judged that it would succeed on a world stage just as on a domestic stage. Therefore, in some ways U.S. media have become more widespread, and also more worldwide in focus. It could even be argued that American cultural exports promote intercultural understanding; after all, to sell to a culture, a business must first understand that culture.

By contrast, some local cultures around the world have taken to Western-style business models so greatly that they have created their own hybrid cultures. One well-known example of this is India’s Bollywood film industry. Combining traditional Indian music and dance with American-style filmmaking, Bollywood studios release around 700 major films each year, three times the rate of the major Hollywood studios. India’s largest film industry mixes melodrama with musical interludes, lip-synced by actors but sung by pop stars. These pop songs are disseminated well before a movie’s release, both to build up hype and to enter multiple media markets. Although similar marketing tactics have been employed in the United States, Bollywood seems to have mastered the art of cross-media integration. The music and dance numbers are essentially cinematic forms of music videos, both promoting the soundtrack and adding variety to the film. The numbers also feature many different Indian national languages and a hybrid of Western dance music and Indian classical singing, a certain departure from conventional Western media (Corliss, 1996).

While cultural imperialism might cause resentment in many parts of the world, the idea that local cultures are helpless under the crushing power of American cultural imposition is clearly too simplistic to hold water. Instead, local cultures seem to adopt American-style media models, changing their methods to fit the corporate structures rather than just the aesthetics of U.S. media. These two economic and cultural aspects are clearly intertwined, but the idea of a foreign power unilaterally crushing a native culture does not seem to be entirely true.

Please respond to the following short-answer writing prompts. Each response should be a minimum of one paragraph.

Media now rely heavily on synergy, or cross-platform media distribution. Because of this, one of the industry’s quickly expanding career fields employs people who manage the online outlets of a more traditional media outlet such as radio or television. Although such jobs used to require extensive technological knowledge, modern online project managers, online media editors, and web producers spend much of their time determining how best to display the content online.

In this activity, you will research a media outlet and then answer questions about the choices that the web producer, editor, or manager made regarding its content. Some possible websites to research include the following:

Now answer the following questions regarding the site that you picked: