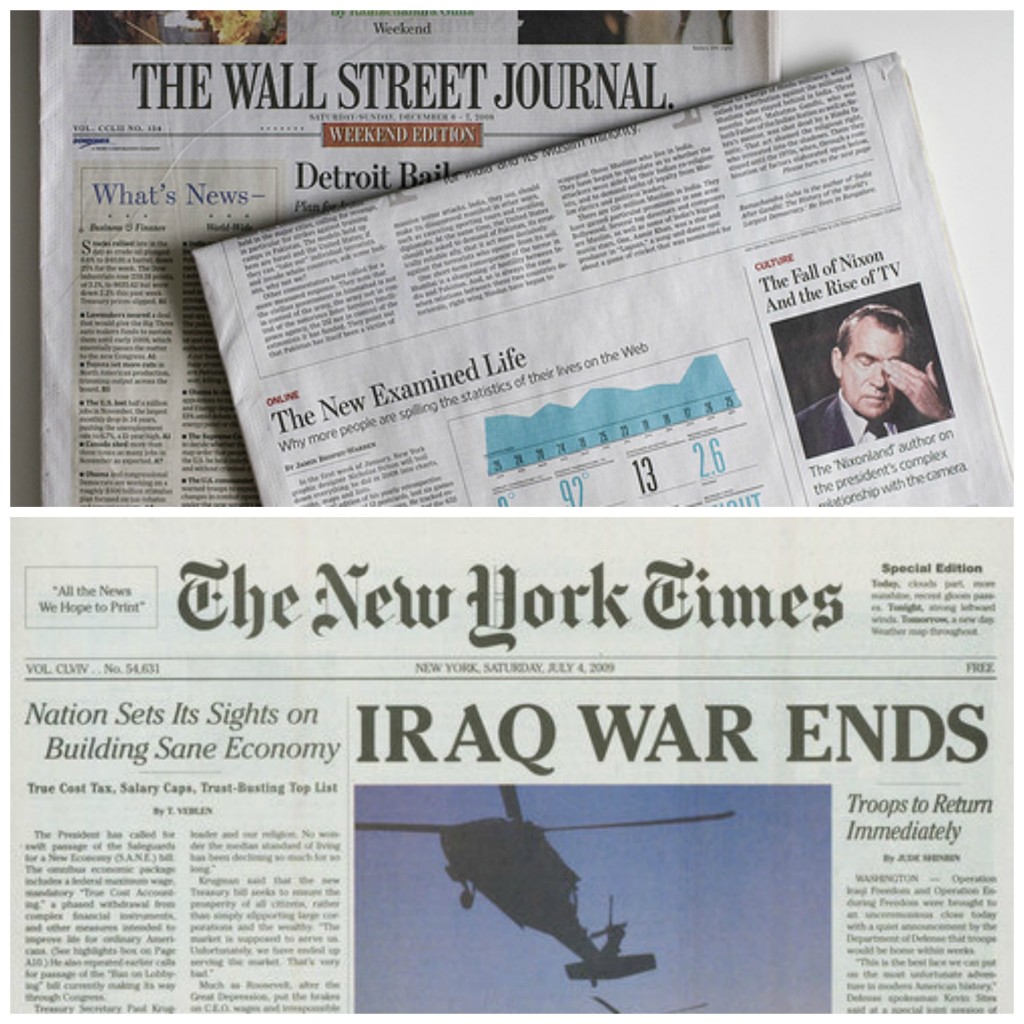 The two major newspapers, the The Wall Street Journal and the The New York Times, battle for their place in the print world.

On April 26, 2010, Wired magazine proclaimed that a “clash of the titans” between two major newspapers, The Wall Street Journal and The New York Times, was about to take place in the midst of an unprecedented downward spiral for the print medium (Burskirk, 2010). Rupert Murdoch, owner of The Wall Street Journal, had announced that his paper was launching a new section, one covering local stories north of Wall Street, something that had been part of The New York Times’ focus since it first began over a century before. New York Times Chairman Arthur Sultzberger Jr. and CEO Janet Robinson pertly responded to the move, welcoming the new section and acknowledging the difficulties a startup can face when competing with the well-established New York Times (Burskirk, 2010).

Despite The New York Times’ droll response, Murdoch’s decision to cover local news indeed presented a threat to the newspaper, particularly as the two publications continue their respective moves from the print to the online market. In fact, some believe that The Wall Street Journal’s decision to launch the new section has very little to do with local coverage and everything to do with the Internet. Newspapers are in a perilous position: Traditional readership is declining even as papers are struggling to create a profitable online business model. Both The Wall Street Journal and The New York Times are striving to remain relevant as competition is increasing and the print medium is becoming unprofitable.

In light of the challenges facing the newspaper industry, The Wall Street Journal’s new section may have a potentially catastrophic effect on The New York Times. Wired magazine described the decision, calling it “two-pronged” to “starve the enemy and capture territory (Burskirk, 2010).” By offering advertising space at a discount in the new Metro section, The Journal would make money while partially cutting The Times off from some of its primary support. Wired magazine also noted that the additional material would be available to subscribers through the Internet, on smartphones, and on the iPad (Burskirk, 2010).

Attracting advertising revenue from The New York Times may give The Wall Street Journal the financial edge it needs to lead in the online news industry. As newspapers move away from print publications to online publications, a strong online presence may secure more readers and, in turn, more advertisers—and thus more revenue—in a challenging economic climate.

This emerging front in the ongoing battle between two of the country’s largest newspapers reveals a problem the newspaper industry has been facing for some time. New York has long been a battleground for other newspapers, but before Murdoch’s decision, these two papers coexisted peacefully for over 100 years, serving divergent readers by focusing on different stories. However, since the invention of radio, newspapers have worried about their future. Even though readership has been declining since the 1950s, the explosion of the Internet and the resulting accessibility of online news has led to an unprecedented drop in subscriptions since the beginning of the 21st century. Also hit hard by the struggling economy’s reluctant advertisers, most newspapers have had to cut costs. Some have reinvented their style to appeal to new audiences. Some, however, have simply closed. As this struggle for profit continues, it’s no surprise that The Wall Street Journal is trying to outperform The New York Times. But how did newspapers get to this point? This chapter provides historical context of the newspaper medium and offers an in-depth examination of journalistic styles and trends to illuminate the mounting challenges for today’s industry.