It’s important to keep in mind that the implementation of new technologies doesn’t mean that the old ones simply vanish into dusty museums. Today’s media consumers still watch television, listen to radio, read newspapers, and become immersed in movies. The difference is that it’s now possible to do all those things through one device—be it a personal computer or a smartphone—and through the Internet. Such actions are enabled by media convergence, the process by which previously distinct technologies come to share tasks and resources. A cell phone that also takes pictures and video is an example of the convergence of digital photography, digital video, and cellular telephone technologies. An extreme, and currently nonexistent, example of technological convergence would be the so-called black box, which would combine all the functions of previously distinct technology and would be the device through which we’d receive all our news, information, entertainment, and social interaction.

But convergence isn’t just limited to technology. Media theorist Henry Jenkins argues that convergence isn’t an end result (as is the hypothetical black box), but instead a process that changes how media is both consumed and produced. Jenkins breaks convergence down into five categories: 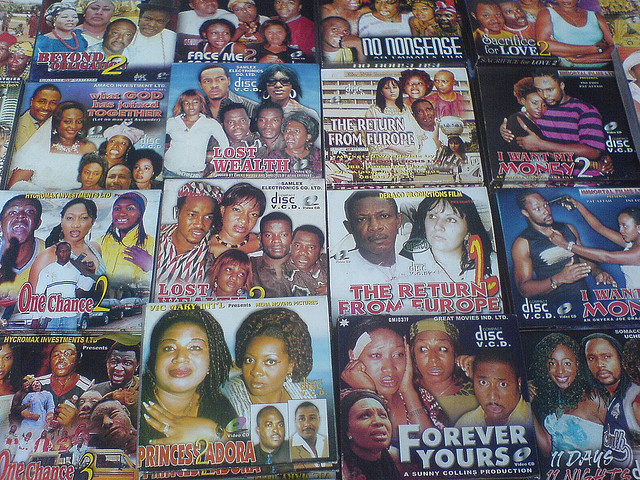 Nigeria’s Nollywood produces more films annually than any other country besides India.

Jenkins’s concept of organic convergence is perhaps the most telling. To many people, especially those who grew up in a world dominated by so-called old media, there is nothing organic about today’s media-dominated world. As a New York Times editorial recently opined, “Few objects on the planet are farther removed from nature—less, say, like a rock or an insect—than a glass and stainless steel smartphone (New York Times, 2010).” But modern American culture is plugged in as never before, and today’s high school students have never known a world where the Internet didn’t exist. Such a cultural sea change causes a significant generation gap between those who grew up with new media and those who didn’t.

A 2010 study by the Kaiser Family Foundation found that Americans aged 8 to 18 spend more than 7.5 hours with electronic devices each day—and, thanks to multitasking, they’re able to pack an average of 11 hours of media content into that 7.5 hours (Lewin, 2010). These statistics highlight some of the aspects of the new digital model of media consumption: participation and multitasking. Today’s teenagers aren’t passively sitting in front of screens, quietly absorbing information. Instead, they are sending text messages to friends, linking news articles on Facebook, commenting on YouTube videos, writing reviews of television episodes to post online, and generally engaging with the culture they consume. Convergence has also made multitasking much easier, as many devices allow users to surf the Internet, listen to music, watch videos, play games, and reply to e-mails on the same machine.

However, it’s still difficult to predict how media convergence and immersion are affecting culture, society, and individual brains. In his 2005 book Everything Bad Is Good for You, Steven Johnson argues that today’s television and video games are mentally stimulating, in that they pose a cognitive challenge and invite active engagement and problem solving. Poking fun at alarmists who see every new technology as making children stupider, Johnson jokingly cautions readers against the dangers of book reading: It “chronically understimulates the senses” and is “tragically isolating.” Even worse, books “follow a fixed linear path. You can’t control their narratives in any fashion—you simply sit back and have the story dictated to you…. This risks instilling a general passivity in our children, making them feel as though they’re powerless to change their circumstances. Reading is not an active, participatory process; it’s a submissive one (Johnson, 2005).”

A 2010 book by Nicholas Carr, The Shallows: What the Internet Is Doing to Our Brains is more pessimistic. Carr worries that the vast array of interlinked information available through the Internet is eroding attention spans and making contemporary minds distracted and less capable of deep, thoughtful engagement with complex ideas and arguments. “Once I was a scuba diver in a sea of words,” Carr reflects ruefully. “Now I zip along the surface like a guy on a Jet Ski (Carr, 2010).” Carr cites neuroscience studies showing that when people try to do two things at once, they give less attention to each and perform the tasks less carefully. In other words, multitasking makes us do a greater number of things poorly. Whatever the ultimate cognitive, social, or technological results, convergence is changing the way we relate to media today.

Video Killed the Radio Star: Convergence Kills Off Obsolete Technology—or Does It?

When was the last time you used a rotary phone? How about a street-side pay phone? Or a library’s card catalog? When you need brief, factual information, when was the last time you reached for a volume of Encyclopedia Britannica? Odds are it’s been a while. All of these habits, formerly common parts of daily life, have been rendered essentially obsolete through the progression of convergence.

But convergence hasn’t erased old technologies; instead, it may have just altered the way we use them. Take cassette tapes and Polaroid film, for example. Influential musician Thurston Moore of the band Sonic Youth recently claimed that he only listens to music on cassette. Polaroid Corporation, creators of the once-popular instant-film cameras, was driven out of business by digital photography in 2008, only to be revived 2 years later—with pop star Lady Gaga as the brand’s creative director. Several Apple iPhone apps allow users to apply effects to photos to make them look more like a Polaroid photo.

Cassettes, Polaroid cameras, and other seemingly obsolete technologies have been able to thrive—albeit in niche markets—both despite and because of Internet culture. Instead of being slick and digitized, cassette tapes and Polaroid photos are physical objects that are made more accessible and more human, according to enthusiasts, because of their flaws. “I think there’s a group of people—fans and artists alike—out there to whom music is more than just a file on your computer, more than just a folder of MP3s,” says Brad Rose, founder of a Tulsa, Oklahoma-based cassette label (Hogan, 2010). The distinctive Polaroid look—caused by uneven color saturation, underdevelopment or overdevelopment, or just daily atmospheric effects on the developing photograph—is emphatically analog. In an age of high resolution, portable printers, and camera phones, the Polaroid’s appeal to some has something to do with ideas of nostalgia and authenticity. Convergence has transformed who uses these media and for what purposes, but it hasn’t eliminated these media.

Review the viewpoints of Henry Jenkins, Steven Johnson, and Nicholas Carr. Then, answer the following questions. Each response should be a minimum of one paragraph.

Carr, Nicholas The Shallows: What the Internet Is Doing to Our Brains (New York: Norton, 2010).

Johnson, Steven Everything Bad Is Good for You (Riverhead, NY: Riverhead Books, 2005).