More than just a tool for information transfer, the Internet has become a conduit for a globalized workforce. A corporation in New York can outsource electronically based work to a highly connected developing country like India without incurring the sort of shipping charges or communication delays that previously impeded such efforts. Internet access, particularly for business, has made development possible in remote areas, allowing corporations access to less expensive labor and allowing money to flow into developing countries. However, as the Internet has become integrated into daily business life, a digital divide has emerged: Some derive the benefits from Internet access, but many others do not.

Many U.S. and international leaders and nongovernmental organizations have identified the digital divide as an area of concern. A globalized workforce does not separate the world into easily divisible political territories but rather into those that have useful access to technology to reach a wider market and those that do not. As the 21st century develops, worldwide communication has become increasingly imperative for a healthy economy, creating a new challenge to make sure that rapid technological changes do not preclude economic success for less developed economies.

However, the problem extends beyond simple access or even competency. The 80/20 effect, under which 80 percent of profit is created for the most affluent 20 percent, exacerbates the digital divide. In other words, the Internet—created in large part by and for the rich—is practically useless for the poor, particularly in developing countries. Thus, bridging the digital divide is about helping those with little or no access to the digital world gain the ability to use technology in economically advantageous ways.

As information and media move online, those without ready access to the Internet are increasingly being left behind. Even in developed countries such as the United States, the digital divide is readily apparent. Often, older and less educated workers do not have computer skills or home Internet access. In June 2009, the Pew Research Center studied the demographic differences in broadband Internet adoption and found that 45 percent of those without Internet access were age 65 and over (Horrigan, 2009). Even more significantly, a quarter of the unconnected were between the ages of 50 and 64. These workers are at a distinct disadvantage when it comes to finding and being hired for jobs.

As classified advertisements and job postings have left newspapers for the web, Internet access has become vital to even finding a job to apply for. In the above-mentioned Pew survey, 20 percent of respondents had incomes of less than $20,000 per year. However, these 20 percent made up a disproportionately high 48 percent of the survey’s non-Internet users; a full 64 percent of low-income survey participants did not have access to the Internet. These numbers drastically dropped as wages increased—while those making under $40,000 per year made up 80 percent of non-Internet users, those making over $50,000 made up 50 percent of high-speed Internet users. As the Internet is becoming an integral part of our daily lives, a lack of access among certain groups could severely hamper upward economic mobility.

Access to the Internet is an essential aspect of many successful job hunts, but it is also important to consider computer skills themselves. Many older adults who grew up without the Internet lack the computer and technology skills that contemporary jobs require. MSNBC reported in October 2009 that unemployment rates for older workers were at a 60-year high, having doubled in the period between late 2007 and the fall of 2009 (Johnson, 2009). While the overall unemployment rate at that time had reached a 26-year high, older workers who lacked the skills of younger, computer-savvy adults were suffering disproportionately. Lack of computer skills can be a crippling impediment to job success, even if a person can find a job in difficult economic times.

In response to these challenges, libraries and other nonprofit groups have taken on the task of training older unemployed workers to effectively use the Internet for job-related needs. These training courses, beginning with turning on a computer and using the mouse and ranging into advanced office program use, seek to provide skills necessary to allow older workers to reenter the work force. These organizations also aim to show users that they can increase their quality of life by setting up e-mail for communication with friends and family members.

While the digital divide in the United States is largely a matter of education, cost barrier, and lack of adoption of new technology, the digital divide in economically underdeveloped countries adds the complication of infrastructure. Internet service requires the existence of widespread stable networks to handle large computer centers, and electronic access to the outside world needs a constant data connection. Therefore, in many developing countries, practically no residents have access to computers and the Internet; this cuts them off not only from information but from the entire global economy.

The Digital Divide Institute has launched a campaign to integrate Indonesia into the global digital network as a representative solution to this problem. Indonesia is the world’s fourth-largest country in terms of population and already has wide cell-phone coverage—a significant advantage when it comes to rural information access (Digital Divide Institute, 2010). The organization claims that by expanding these wireless communication networks to encompass 3G and high-speed Internet access, access to the Internet could rise so much that Indonesia could become a fully emerging market for global services. To put this in perspective, connecting 20 percent of Indonesians to the Internet brings the total connected population of Indonesia to 48 million users, equivalent to all of South Korea, one of the most connected countries in the world (Central Intelligence Agency). The economic and political benefits of widespread Internet connectivity to nations like Indonesia are huge. The Digital Divide Institute points to Ireland as an example of how increasingly high-tech jobs can accompany the decline of terrorism—evidence that bridging the digital divide can be an issue of international security as well as global prosperity.

One contentious issue in bridging the digital divide is which billion to focus on—of the 6.8 billion people in the world, only an estimated 1.6 billion are connected to the Internet (Central Intelligence Agency). Therefore, the discussion of bridging the digital divide is quickly complicated by this question: To whom should we build the bridge? While some organizations such as the Digital Divide Institute suggest that the global “pyramid” should focus on the next billion—countries such as Indonesia with wide cell-phone coverage but little access to useful, global digital technology. Other organizations see it differently. 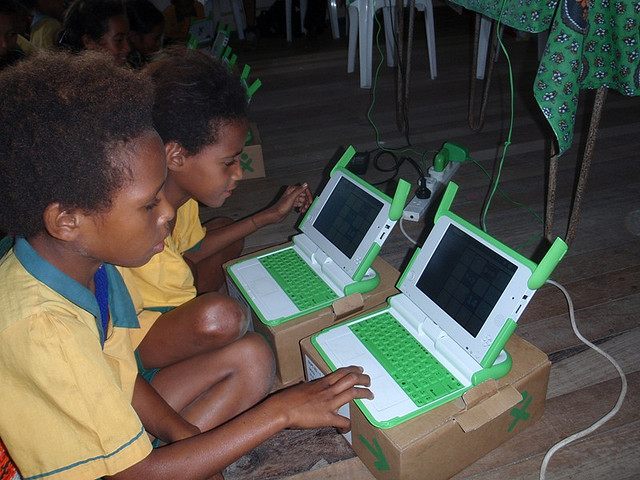 The One Laptop per Child project aims to put one of these XO computers in the hands of many children in developing countries.

Many believe that everyone in the world can benefit from technology if it is deployed properly. The organization One Laptop per Child (OLPC) seeks to achieve exactly what its name implies with a low-cost design that runs on free software and requires very little energy (Labtop). Central to OLPC’s goal is the idea that learning to use technology needs to be recalibrated toward learning through technology. Another crucial idea is the organization’s conception of networks as essentially localized with the potential to be expanded. OLPC’s XO laptop connects to its neighbors, creating many small networks through a fairly wide wireless range. In addition, its ability to access the Internet through this wide wireless range allows remote educational opportunities for children in developing countries. Although it may seem to leap directly from no communication access to wireless Internet video streaming, this program has shown that it may even be more cost effective than traditional connective technologies like phone lines.

Please respond to the following short-answer writing prompts. Each response should be a minimum of one paragraph.