The Xue 薛 family is fabulously wealthy. But they are aware that they are nouveaux riches, that they do not have the standing of the Jia family.  The family is somewhat embarrassed when it becomes known that one of the sources of their wealth is pawnshops.

Baochai 寶釵 is portrayed as being sensible and good-hearted, sometimes irritatingly so.  In chapter 43 of the novel, she counsels Daiyu 黛玉 on what plays are and are not appropriate for a young woman to quote in the context of drinking games. Her arrival at the Jia 賈 household (and a contrasting of her virtues with those of Daiyu 黛玉) is described in the scene which opens chapter 5.

Baochai 寶釵 and Baoyu 寶玉 also have a connection which transcends the mundane world.  Baochai 寶釵 has a gold locket given to her by a monk with an inscription that matches the inscription on Baoyu’s 寶玉 jade, which suggests to many in the novel that marriage between the two of them is pre-ordained. In many, though not all, visual representations of her we see a locket around her neck, a constant reminder of her connection with Baoyu 寶玉, who is always portrayed with the jade around his neck.

In the opera, Lady Wang 王夫人 sees the Xue fortune as a way of clearing the Jia 賈 family debt and hence is insistent that Baoyu 寶玉 marry Baochai 寶釵.  In the novel, Baoyu 寶玉 is tricked into marrying Baochai 寶釵, but the motives of his family are more complex.  The matriarchs of the family regard Daiyu 黛玉 as fragile and unstable: Baochai 寶釵 is seen as a much more appropriate wife. Baoyu 寶玉 has made it clear that he will marry only Daiyu 黛玉; therefore a ruse is the only way the marriage can take place. (The Jia 賈 family placed financial considerations above all else in other marriages, Jia Yingchun 賈探春, Baoyu’s 寶玉 cousin, was married to a man who was rich but had nothing else to recommend him. Thus the mercenary concerns of Lady Wang 王夫人 and Aunt Xue 薛姨媽 in the opera resonate with other decisions about marriage in the novel.) 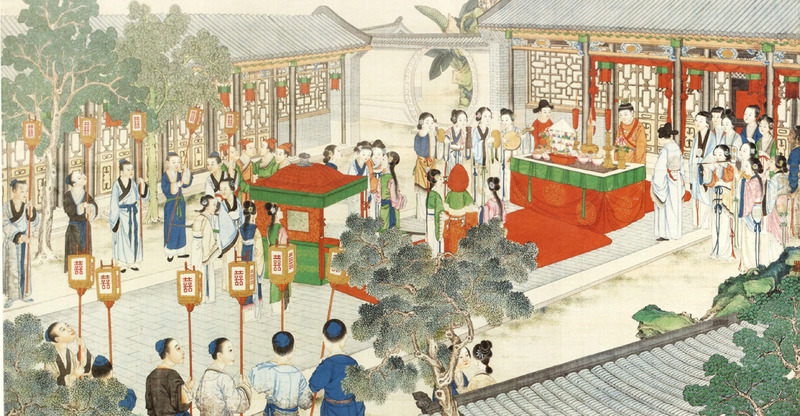 This painting by Sun Wen 孙温 shows the wedding between Baoyu 寶玉 and Baochai 寶釵, where he believes that he is marrying Daiyu 黛玉. The wedding party is surrounded by men bearing lanterns with the sign for double happiness 喜喜, which signifies a wedding. Female musicians on either side of Baoyu 寶玉  are performing. 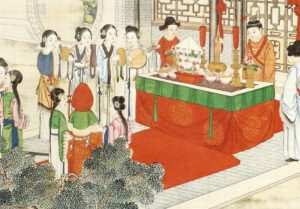 In this detail from the same painting, it is easier to see Baoyu 寶玉 and Baochai 寶釵. Baoyu 寶玉 is standing behind the table, dressed in red, wearing his signature headdress with the red ornament. Baochai 寶釵 has just descended from her sedan chair, and is being supported by two maids. She is wearing a red veil, which in this image looks like a hood. That Baochai 寶釵married Baoyu 寶玉 was a tragedy for Daiyu 黛玉, but it was not a happy ending for Baochai 寶釵, either. When her mother told her in chapter 97 about plans for the wedding (and that it was necessary for Baoyu 寶玉 to believe he was marrying Daiyu 黛玉) she wept.

After his marriage, Baoyu 寶玉 takes the civil service examinations, as Baochai 寶釵 had long wished. He passes them with flying colors, However, he does not return home, but rather wanders off with a monk.  At the end of the 120-chapter version of the novel, Baochai 寶釵 is left at home, pregnant with Baoyu’s 寶玉 child.

The image to the right portrays Baochai 寶釵 after Baoyu 寶玉has left.   She is standing in a domestic scene, but looking out at the viewer, as if in a photograph.  There is a curtain, which is partially drawn.  A poem is inscribed on the curtain.  It reads in simplified characters:

And here it is in complex characters:

A rough translation would be:

In Red Rue Studio, the dreamer and mandarin ducks.
By the Raindrop Pavilion,  a diversion  and butterflies.
Tricked into a month-long marriage, with no long-life flowers.
And for half a lifetime, all she gained was solitude, behind an embroidered curtain.

“Red Rue Studio”絳芸軒 is the residence of Baoyu, which David Hawkes renders as “Green Delights.”

In the episode referred to in the first line, Baochai 寶釵 hears the sleeping Baoyu 寶玉 say that he does not believe in the destiny of gold and jade (i.e. that he would marry Baochai寶釵) but rather that he prefers the destiny of stone and flower (ie. that Daiyu 黛玉 is his fated match).  In the episode referred to in the second line, Baochai 寶釵 sees Baoyu 寶玉 going into Daiyu’s 黛玉 room and thinks better of following him and chooses to chase butterflies instead. Thus, these two lines invoke episodes that made it clear to Baochai 寶釵 , fairly early in the novel, that Baoyu 寶玉 preferred Daiyu 黛玉.

While she was speaking, her eye fell on the sewing that Aroma had just put down. It was a pinafore of the kind that children wear, with a bib and apron in one. It was of white satin lined with red silk, and the pattern Aroma was embroidering on it was one of mandarin ducks disporting themselves in a background of lotuses. The ducks were in rainbow colors, and the lotuses had red flowers and green leaves,

“Goodness, how beautiful!” she exclaimed. “Who’s it for?  It must be for someone very special, to deserve work as fine as this.”

Aroma turned her head and shot out her lips in the direction of the figure sleeping on the bed.

“He wouldn’t wear them to start with. That’s why I try to make them so nicely–so that when he sees them he can’t resist putting them on. I try to get him to wear them in this hot weather, so that if he uncovers himself in his sleep, there’s no risk of him getting chilled. If you think there’s a lot of work in this one, you ought to see the one he’s wearing.”

Aroma leaves the room to stretch her legs a bit and asks Baochai to take her place sitting by the sleeping Baoyu. Baochai found the embroidery irresistible, and picked it up and “began sewing it where Aroma left off.”  She continues to embroider.  Baoyu speaks in his sleep:

The words astounded her. She still had not recovered from the shock of hearing them when Aroma returned.

The scene with the butterflies is in chapter 27, and is reproduced in the text box below.

Images of Xue Baochai often portray her chasing butterflies.  The illustrations refer to an episode in chapter 27 of the novel.  Baochai, who had been on her way to visit Daiyu, thinks better of it after seeing Baoyu go into her rooms. Baochai muses, in David Hawkes’ translation,

“Baoyu and Daiyu have known each other since they were little,” she reflected. “They are used to behaving uninhibitedly when they are alone together. They don’t seem to care what they say to one another; and one is never sure what sort of mood one is going to find them in. And Daiyu, at the best of times, is always so touchy and suspcious. If I go in now after him, he is sure to feel embarrassed and she is sure to start imagining things.  It would be better to go back without seeing her.”

Her mind made up, she turned round and began to trace her steps, intending to go back to the other girls; but just at that moment she noticed two enormous turquoise-coloured butterflies a little way ahead of her, each as large as a child’s fan, fluttering and dancing on the breeze.  She watched them fascinated and thought she would like to play a game with them.

Taking a fan from inside her sleeve and holding it outspread in front of her, she followed them off the path and into the grass.  To and fro fluttered the pair of butterflies, sometimes alighting for a moment, but always flying off again before she could reach them. Once they seemed on the point of flying across the little river that flowed through the midst of the garden and Baochai had to stalk them with bated breath for fear of startling them out onto the water.

By the time she had reached the Raindrop Pavilion, she was perspiring freely and her interest in the butterflies was beginning to evaporate.  She was about to turn back when she became aware of a low murmur of voices coming from inside the pavilion.

The link is to the Chinese text project version of the segment.

Text from chapter 97 of the novel: Baochai Weeps

In chapter 97, Aunt Xue gives her consent for Baochai to marry Baoyu.  Baoyu will believe that he is marrying Daiyu. Thus the marriage depends on a ruse.

Next day, Aunt Xue returned to her apartment and told Baochai the details of the proposal, adding:

“I have already given my consent.”

At first Baochai hung her head in silence.  Then she began to cry.  Aunt Xue said all that she could to comfort her, and went to great lengths to explain the reasoning behind the decision. Baochai retired to her room, and Baoqin went in to keep her company and cheer her up.

The text is available here at the Chinese text project.
http://ctext.org/dictionary.pl?if=en&id=106684