The novel and the opera both revolve around Jia Baoyu 賈寶玉, the reincarnation of the stone, the boy who was born with the jade in his mouth. He is connected to Lin Daiyu 林黛玉 because of their past lives as the Stone and the Crimson Pearl Flower, and to Xue Baochai 薛寶釵 by their matching lockets–his of jade, hers of gold. One of the connections portends tragedy–the Crimson Pearl Flower can never find happiness because she owes the Stone a debt of tears. The other portends union–the jade and gold would in fact be united when Baoyu and Baochai marry, though it is a marriage with little joy.

In his earthly life, Baoyu 寶玉 is the pampered heir to the tremendously wealthy and powerful Jia family. He lives in a garden with his female cousins and spends his days socializing with them and writing poetry. It is an idyllic life, but a life that cannot (and does not) continue. Early in the novel (in chapter 2) the reader is told that the Jias are in trouble and that the crux of the trouble is their failure to “turn out good sons.”

Baoyu’s 寶玉 refusal to grow up in any way is one of the themes of the novel. He does not properly prepare for his adult life by studying for the civil service examinations which would provide the opportunity for employment as an official. His refusal to study is a constant source of tension with his father, Jia Zheng 賈政. His easy banter with his female cousins suggests that he remains innocent (or at least unaware) of sexuality, even after he has had sexual relations with his maid, Aroma (Xiren 襲人). The world of the adolescent is portrayed in the novel as attractive, but Baoyu’s refusal to come to terms with adulthood is one of the causes of the catastrophe which befalls the Jia family.

In chapter 80, the last chapter of the novel written by Cao Xueqin 曹雪芹, it is still not clear what Baoyu’s 寶玉 future holds for him. 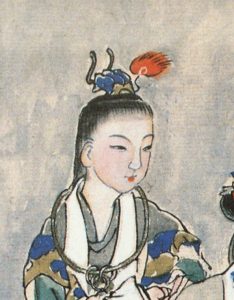 The image to the right is a detail of a Yangliuqing 楊柳青 print of Patience (Ping;er平兒)  at her Dressing Table. The viewer can also see the necklace on which the all-important jade is suspended, though the jade itself is not visible in this detail. Baoyu’s hair and headdress are worthy of note.  He is not yet wearing an adult hairstyle. (The issue of adult male hairstyle is complex because of the novel’s refusal to identify in which dynasty it takes place. The Qing mandated the queue, a style in which the front of the head was shaved and the back was worn in a braid.  Men of the Ming wore their long hair tied up on top of their heads. Baoyu is wearing neither of these hairstyles.) Baoyu is almost always portrayed wearing a headdress which has a red ornament on it. I have seen pictures in which his young brother and cousin are wearing a similar headdress–it clearly indicates his status as a not-yet adult man. 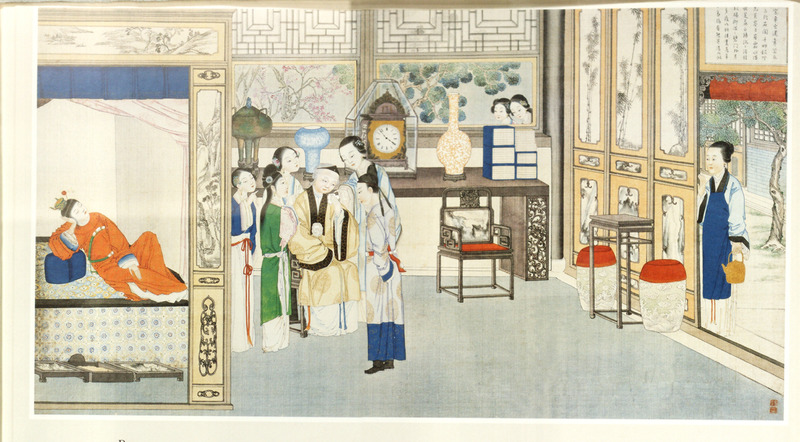 Baoyu’s 寶玉 identity is profoundly connected to the jade, which he wears around his neck at all times.  in chapter 113 he loses the jade, and he goes mad.  The household is thrown into a panic; the jade seems emblematic of the fate of the entire family.

The above image, by the painter Sun Wen 孙温  (c.1817-1903),  shows Baoyu 寶玉 in bed; and a gathering of concerned female relatives in his room just outside the bed.  On the side table, there is a stack of books, some porcelain, a bronze vessel, a western clock in what looks to be a glass case (there are several references to western clocks in the novel).  One of the chair backs is a dreamstone, similar to those in the collection of the Minneapolis Institute of Art. At the door, we see a maid with a kettle of hot water, which is perhaps for tea and perhaps for washing. (Sun Wen’s 孙温  paintings are a terrific source for early twentieth-century imaginings of the eighteenth-century world of the novel.)

Even though Baoyu 寶玉 is in bed ill, he is dressed and is wearing his typical headdress, with a red ornament.

The literature on Baoyu is voluminous.  A good starting point is two essays in Schonebaum and Lu: Maram Epstein’s “Making Sense of Baoyu: Staging Ideology and Aesthetics” and James Millward’s “Baoyu’s Education.”